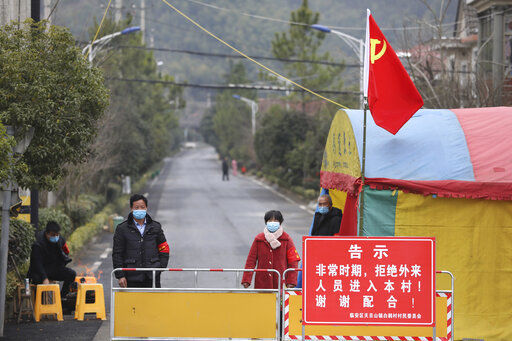 Volunteers stand beneath a Communist Party flag Feb. 3 as they man a barricade checkpoint at a village in Hangzhou in eastern China's Zhejiang Province. China sent medical workers and equipment to a newly built hospital, infused cash into financial markets and further restricted people's movement in sweeping new steps to contain a rapidly spreading virus and its escalating impact.

Volunteers stand beneath a Communist Party flag Feb. 3 as they man a barricade checkpoint at a village in Hangzhou in eastern China's Zhejiang Province. China sent medical workers and equipment to a newly built hospital, infused cash into financial markets and further restricted people's movement in sweeping new steps to contain a rapidly spreading virus and its escalating impact.

The Centers for Disease Control and Prevention report that the symptoms of coronavirus typically only last for a short time. They may include a cough, runny nose, headache, fever and “a general feeling of being unwell.”

That’s also an apt description of the markets this past week, which succumbed to fear and uncertainty. As it spread more rapidly in central China and cropped up here and there around the world, anxiety festered.

The dairy markets were not immune. After a healthy rally the previous week, they suffered a sizeable setback. Chicago Mercantile Exchange spot Cheddar barrels were weakest. They decreased 11 cents to $1.50 per pound. Blocks lost 7.5 cents but are still looking hale at $1.92. Cheese demand is excellent, as befits the final flourish to football season. 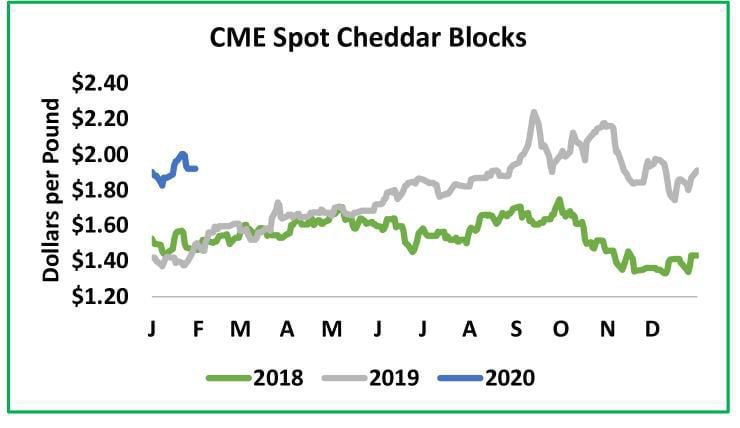 Two questions will determine the direction of the cheese markets from here.

The calendar suggests that cheese prices will begin to fade, but the wide spread between blocks and barrels leaves plenty of room for barrels to gain ground.

CME spot whey climbed to its best value since September, but then decreased back to where it began the week at 36.5 cents. Class III futures finished deep in the red, at prices ranging from $17.04 per hundredweight in January to $17.88 in October. The February contract plunged 86 cents this past week; most second-half contracts lost about 20 cents.

Class IV futures were similarly sickly. The March through June contracts lost at least 40 cents; all first-quarter contracts are now south of $17. While deferred Class IV contracts slumped, most are still at more than $18.

After climbing to fresh five-year best prices the previous week, CME spot nonfat-dry milk decreased 4.75 cents to $1.24. The fundamentals of the milk-powder market remain sound, with strong demand and waning stocks on both sides of the Atlantic. Manufacturers are keeping product moving. Some tell the U.S. Department of Agriculture’s “Dairy Market News” that their inventories are less than a month old. Exports are robust.

But the trade is understandably concerned about Chinese dairy demand. This past week China celebrated its Lunar New Year. Instead of the typical festival atmosphere, Chinese consumers are hunkered down at home or behind face masks. In Wuhan – a city larger than the New York City – Dairy Queen, Starbucks, McDonald’s and Pizza Hut are closed. Would-be buyers of blizzards, lattes, cheeseburgers and pizza are likely subsisting from their cupboards.

Milk powder is a pantry item – less likely than restaurant foods to lose sales that it can’t gain back. But if the Chinese economy grows more slowly due to coronavirus – just as it did for a time during the severe acute respiratory syndrome or SARS outbreak in 2003 – then demand for all sorts of goods is likely to slip. Milk powder in China dominates the dairy space. The nonfat-dry-milk market is pricing in the risk that Chinese dairy imports will be less vigorous going forward.

CME spot butter floundered Jan. 28 to $1.775, its worst price since October 2016. That was bad enough for now. Butter bounced right back and finished at $1.90, an increase of 4 cents this past week. The early-week prices put U.S. butter on par with global product for the first time in almost a year, which suggests firm support at those values. But further upside may be limited. 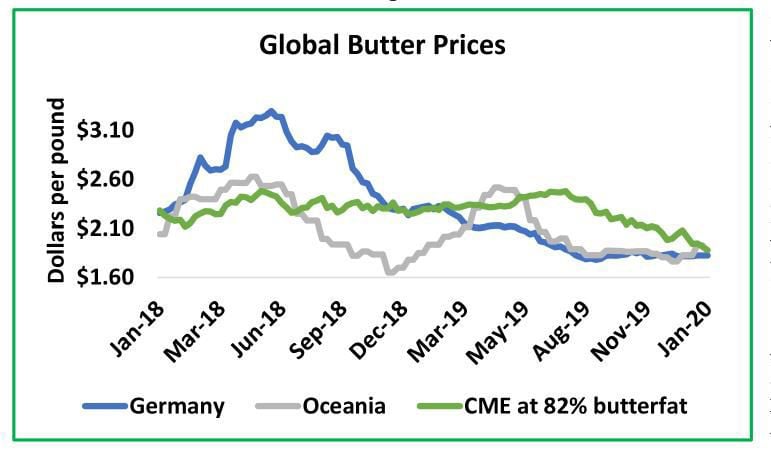 Cream is cheap and churns are running hard. The U.S. dairy-heifer herd peaked in 2016 at a 54-year record number of 4.82 million head. Those heifers fueled the rapid growth in the milk-cow herd from mid-2016 through January 2018. They also deflated the springer market.

At the same time Holstein bull calves became practically worthless. Dairy producers didn’t want to make a surplus of cheap heifers but also had no need for Holstein bull calves. Seeking better cash flow, a growing share of the industry introduced beef genetics into their breeding program. For years the dairy industry has been simultaneously conceiving fewer dairy heifer calves and slaughtering cows at a liquidation pace. That has taken a toll on heifer inventories.

The USDA estimates the Jan. 1 dairy-heifer supply at 4.64 million head. That’s 131,300 fewer than at the start of 2018, decreasing 187,000 from 2016 for a decline of 3.9 percent. The number of dairy heifers expected to calve in the calendar year has decreased for four consecutive years; it now stands at its smallest level since 2013. The number of heifers ready to calve and enter the milk parlor since 2016 has decreased a substantial 5.9 percent. 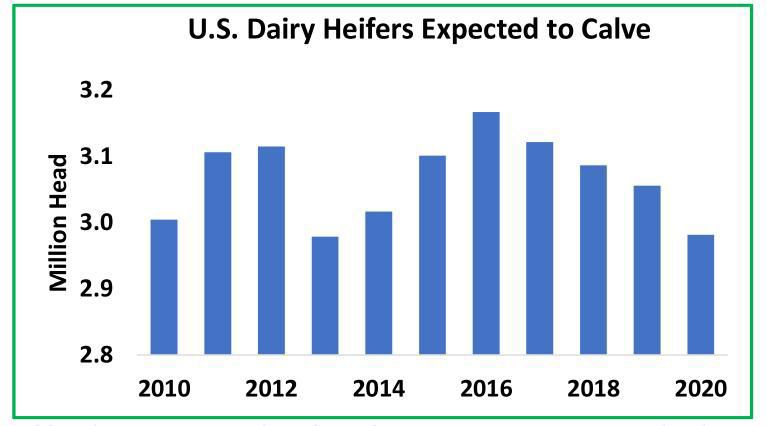 Tighter heifer inventories are likely to boost calf, springer and milk-cow values, especially if milk prices improve as the futures project. Perhaps more importantly they will make it more difficult for the industry to expand to excess. That bodes well for dairy-product values in the long run. 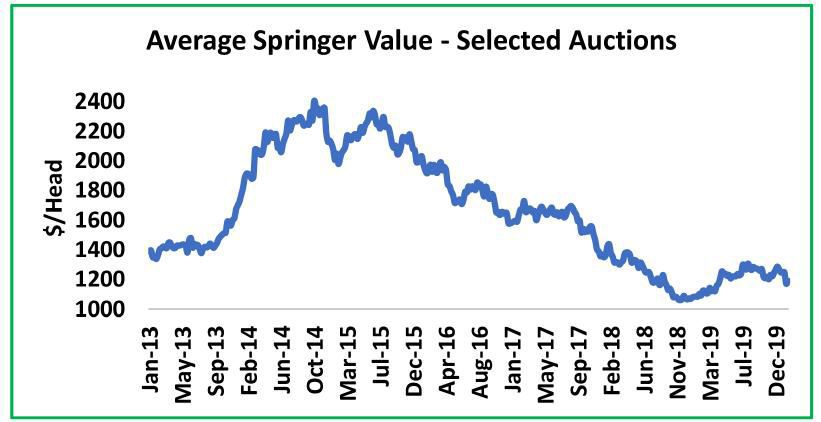