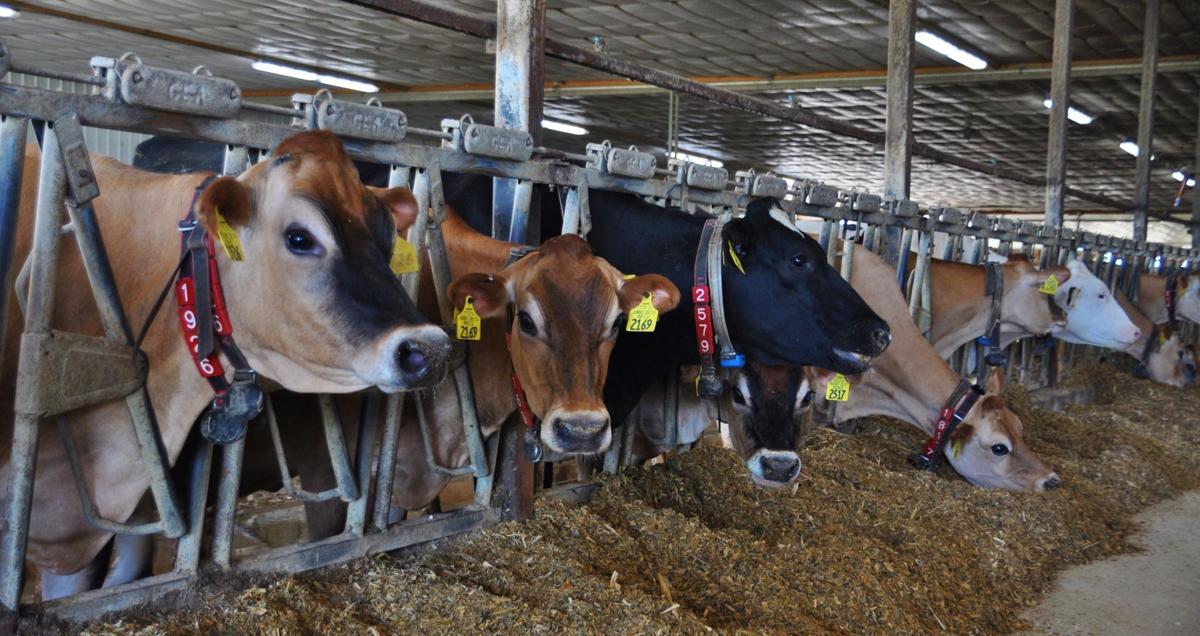 All eyes were on the Chicago Mercantile Exchange spot Cheddar markets this past week as block prices and especially barrel prices decreased decisively. After beginning their downward slide the previous week, spot barrel prices plunged in recent days – by more than 70 cents through the course of the week. That included a record 29-cent loss this past Friday.

Not to be left behind, Cheddar spot blocks decreased to less than $2 for the first time since early September. They decreased 42.5 cents versus Nov. 6, posting the third-largest weekly-average price decline on record. Blocks finished the week at $1.9175 per pound while barrels ended at $1.61 per pound. During the week 32 loads of barrels and 14 loads of blocks traded hands, with unfilled offers remaining on the board following each session. Combined with anecdotal evidence from market participants, that indicates much of the tightness in fresh Cheddar that initially increased prices has eased. 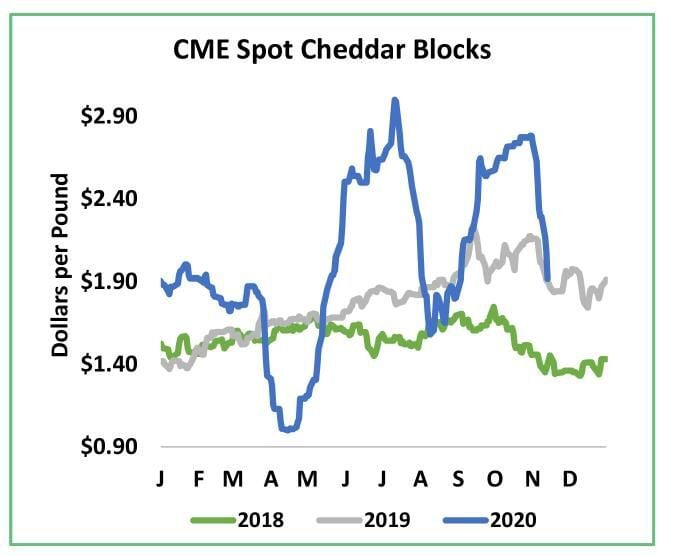 New concerns about demand are brewing as reinstated lockdown restrictions are dampening expectations for cheese consumption through food-service channels and at holiday celebrations. Cheese manufacturers report buyers have temporarily stepped out of the market to see how much more prices will decrease before placing additional orders, adding additional slack into demand. 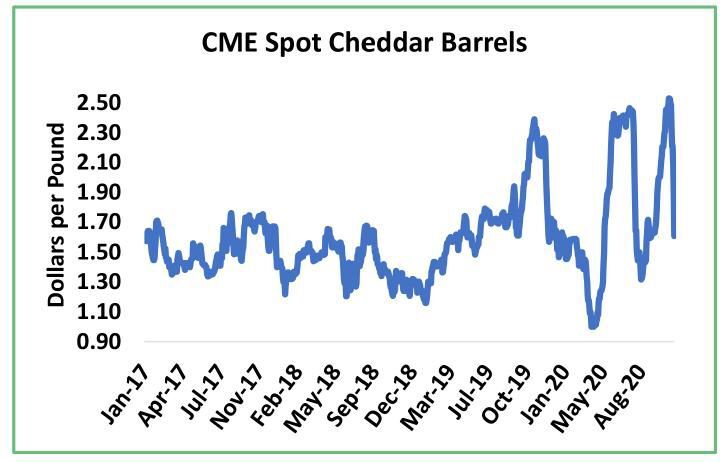 The CME spot butter market posted mixed performance as participants try to shake out the direction of the market. After opening Nov. 9 with a 3.25-cent gain compared to the prior week, butter prices gradually lost steam during the course of the week, ultimately closing Nov. 13’s trading session at $1.40 per pound – a net loss of 3 cents versus the prior week.

Cream is sufficiently available but manufacturers preparing for holiday sales and for a resurgence of the home-baking craze has kept the market from deteriorating too rapidly. Nevertheless the U.S. Department of Agriculture reports that many butter manufacturers expect prices to ease further; they’re trimming inventories in anticipation of additional price decreases in the market.

Dry products were able to buck the trend and find a bit of strength at the CME spot market this past week. Sustained interest from the export market helped to keep tension on nonfat-dry-milk prices. That was even as demand from Mexico, the largest trading partner for the United States, continues to be decidedly lackluster. Though it dropped a penny the spot session Nov. 13, CME spot nonfat-dry-milk prices ended the week at $1.0875 per pound – an increase of 2.25 cents for the week. Whey prices were also able to increase, adding 75 cents during the course of the week to end the Nov. 13 session at $0.43 per pound. Cheese manufacturers, anticipating the price decline, have toned down production thus reducing the available whey stream. Meanwhile firm demand, particularly from the export market, has been supportive of prices. Sustained weakness of the U.S. dollar is expected to support the ability of U.S. dairy exports to be competitive in the near term. 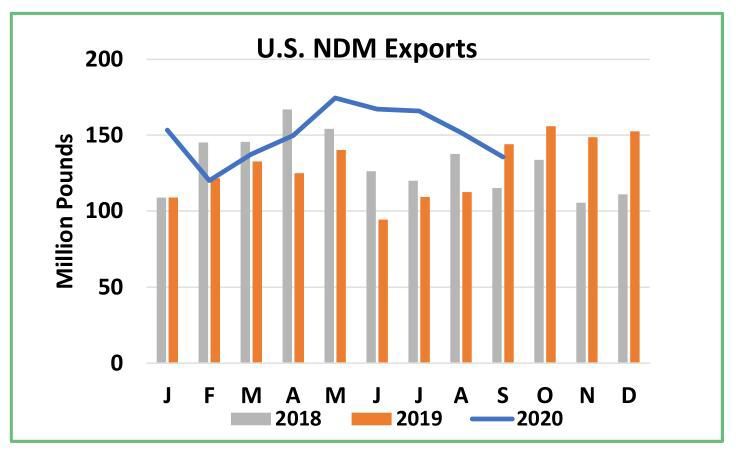 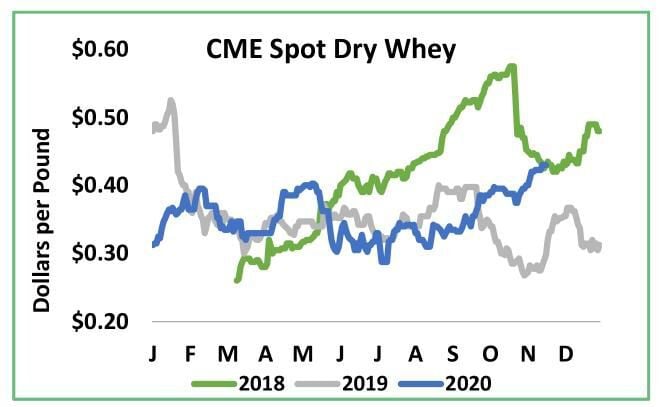 Producers across most of the country are reporting production that is flat to slightly improved. Particularly in the West, improved weather has been supporting additional output in recent weeks. Fluid-milk demand continues to suffer from a reduced pull by schools even as retail demand remains robust. And coffee sales have demonstrated a remarkable recovery.

Milk prices were fickle during the course of the past week as they digested the movements in the spot markets. Class III prices found some strength early in the week, but by Nov. 11 the losses in the cheese market became too much to bear. December Class III milk decreased to $17.71 per hundredweight by Nov. 13, a decrease of $1.35 since Nov. 9. The January contract lost a more-modest 83 cents, but slipped to less than $17 – closing Nov. 13 at $16.96. Class IV prices were tempered by the more-modest movements in the butter and nonfat-dry-milk markets, with the November contract losing just 20 cents from Nov. 9 to end the week at $13.43 per hundredweight. 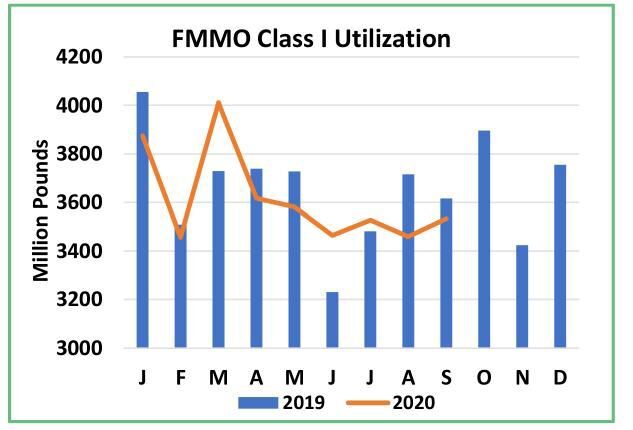 The USDA reduced its expectations for the size of the corn and soybean crops in its latest World Agricultural Supply and Demand Estimates report, sending the grain markets skyward. Following the report’s publication January soybean futures vaulted by 35.5 cents, settling Nov. 19 at $11.46 per bushel. December corn futures also rallied, adding 15.5 cents Nov. 10 to hit $4.23 per bushel before easing through the balance of the week. Uncertainty about global supplies and a favorable export scenario emboldened by a weak dollar is likely to keep upward pressure on grain prices.