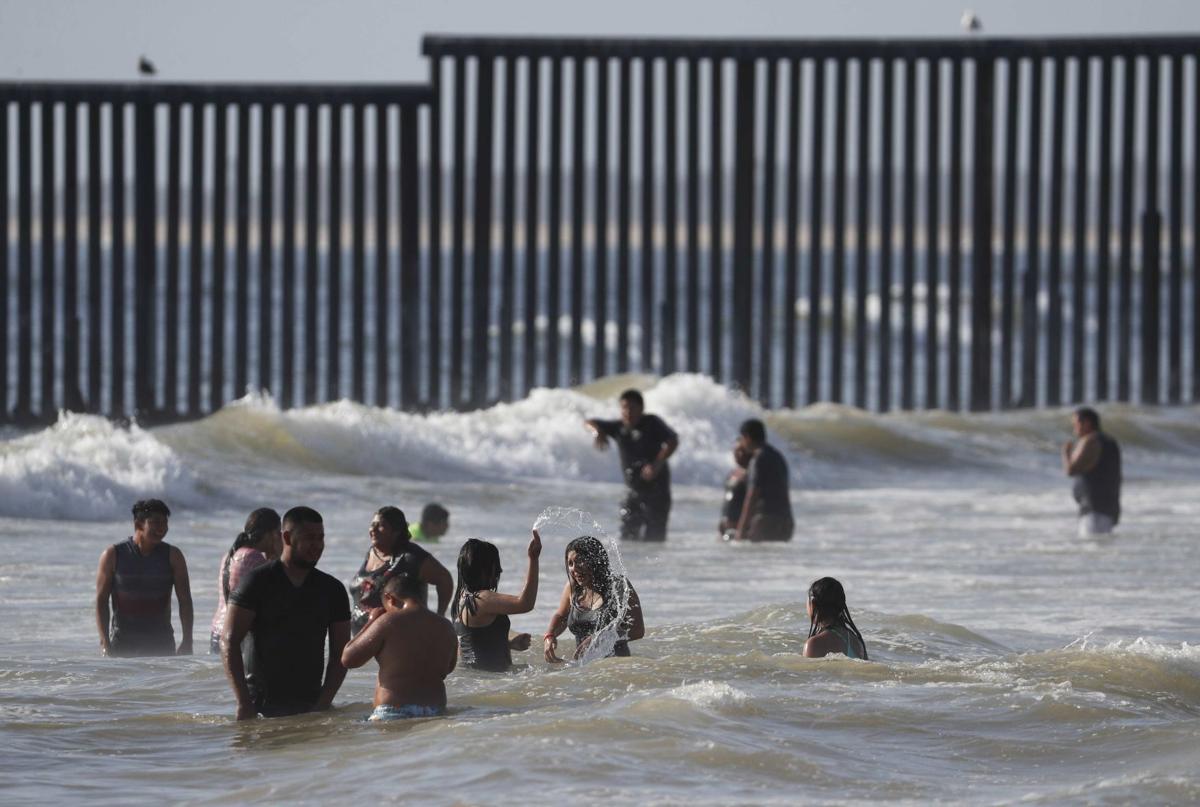 People enjoy the beach June 9 near the U.S. border wall in Tijuana, Mexico. 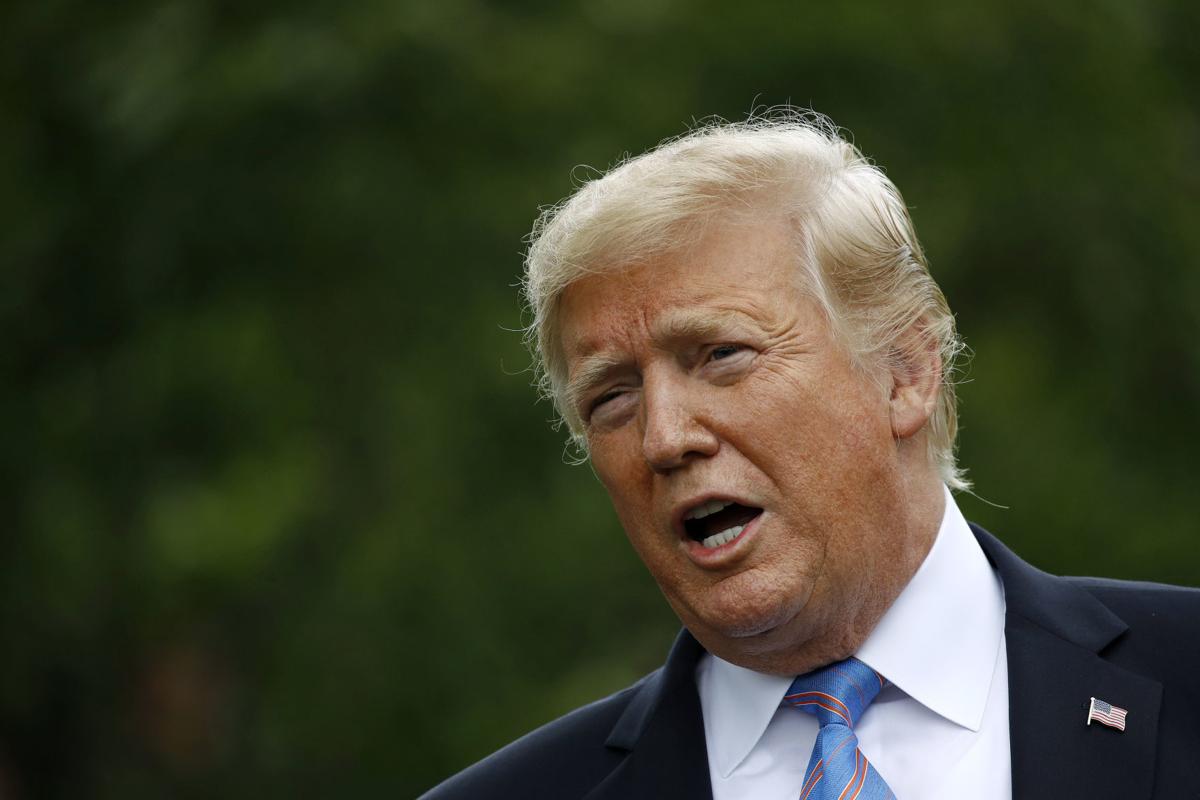 President Donald Trump speaks June 10 on the South Lawn at the White House in Washington, D.C.

WASHINGTON (AP) – Three days after U.S. President Donald Trump announced a deal with Mexico to stem the flow of migrants at the southern border, the two countries appear unable to agree on exactly what’s in the deal.

Stung by criticism that the agreement mostly increases border-protection efforts already underway, Trump hinted at other secret agreements he says will soon be revealed.

“We have fully signed and documented another very important part of the Immigration and Security deal with Mexico, one that the U.S. has been asking about getting for many years,” Trump wrote June 10, saying it would “be revealed in the not too distant future.”

Not so, said Mexican Foreign Secretary Marcelo Ebrard, holding up a paper and pointing to previously announced details. He told reporters the two countries agreed on two actions made public June 7. He said if those measures didn’t work to slow migration, they would discuss further options.

“There is no other thing beyond what I have just explained,” he said.

Trump tweeted this past weekend that Mexico had “AGREED TO IMMEDIATELY BEGIN BUYING LARGE QUANTITIES OF AGRICULTURAL PRODUCT FROM OUR GREAT PATRIOT FARMERS!”

The administration has yet to reveal the details of any such provision, and Mexican officials say no agreement on farm goods was reached as part of the talks.

Ebrard told reporters the talks had focused on migration, not commerce. He hypothesized Trump was calculating an economic boost resulting from his decision not to implement the tariffs.

“We do not have a specific agreement on products of that nature,” he said.

The episodes revealed the complicated political dynamics at play as Trump and Mexican President Andrés Manuel López Obrador tussle regarding who made out best in the agreement hashed out under Trump’s threat of new tariffs on Mexico. Trump appeared eager to declare his negotiation tactics successful, even as he tried to hype the deal, sparking questions and confusion. Mexico’s leaders showed they weren’t willing to play along.

The White House did not respond to inquiries about Trump’s tweets. But the president appeared to be making a reference to talks over how Mexico handles Central American migrants who travel through the country to claim asylum in the United States

The Trump administration has been trying to pressure Mexico to enter into a “safe third-country” agreement, which would deem Mexico a safe place for migrants. That would make it more difficult for asylum seekers who pass through the country to wait until they reach American soil to file a claim.

But the deal announced June 7 made no mention of the issue. The deal includes a commitment by Mexico to deploy its new National Guard to the country’s southern border with Guatemala. But that’s something the country had already intended to do before Trump’s latest threat. The deal also includes an agreement to publicly support the expansion of a program under which some asylum seekers are returned to Mexico as they wait out their cases. U.S. officials had been working to expand the program, which has led to the return of about 11,000 to Mexico without Mexico’s public embrace.

Trump and other administration officials say Mexico made major concessions. They have credited his threat to slap a 5 percent tax on all Mexican goods if the country didn’t immediately agree to do more to stem the flow of Central American migrants across the U.S. southern border. Without the threat, Trump has insisted, Mexico never would have acted.

Mexico has been insistent that it has not agreed to the safe-third-country measure, which would require approval from local lawmakers. Ebrard said if the deal announced June 7 does not begin to decrease migrant numbers in the next 45 days, officials will open new discussions. In those talks the United States will again push for the safe-third-country measure. And Mexico will propose establishing a regional refuge system in conjunction with the United Nations and the governments of Guatemala, Panama and Brazil – three countries that are often starting points for migrants headed to the United States.

“They wanted something else totally different ... to be signed,” Ebrard said. “But that is what there is here. There is no other thing.”

Mexico fears that being designated a safe third country would only add to the number of asylum applications it receives. Those numbers have climbed dramatically in recent years; the government has said it doesn’t have the resources to handle them.

As a practical matter Mexico would have difficulty integrating thousands of additional migrants into a barely growing economy, making them targets to expand the ranks of Mexican organized-crime groups.

Perhaps the biggest agricultural demand story of the 21st century has been China.

The April reading of the Ag Economy Barometer was 178, virtually unchanged from a month earlier when the index stood at 177. It’s just 5 point…

The Class III markets ended the past week not far from where they began, but the calm on the surface belied the roiling waters below. Chicago …

We’re not returning to pre-COVID

In Washington, policy focus is shifting to building for the future. On the rural front agriculture has its swagger back.

People enjoy the beach June 9 near the U.S. border wall in Tijuana, Mexico.

President Donald Trump speaks June 10 on the South Lawn at the White House in Washington, D.C.