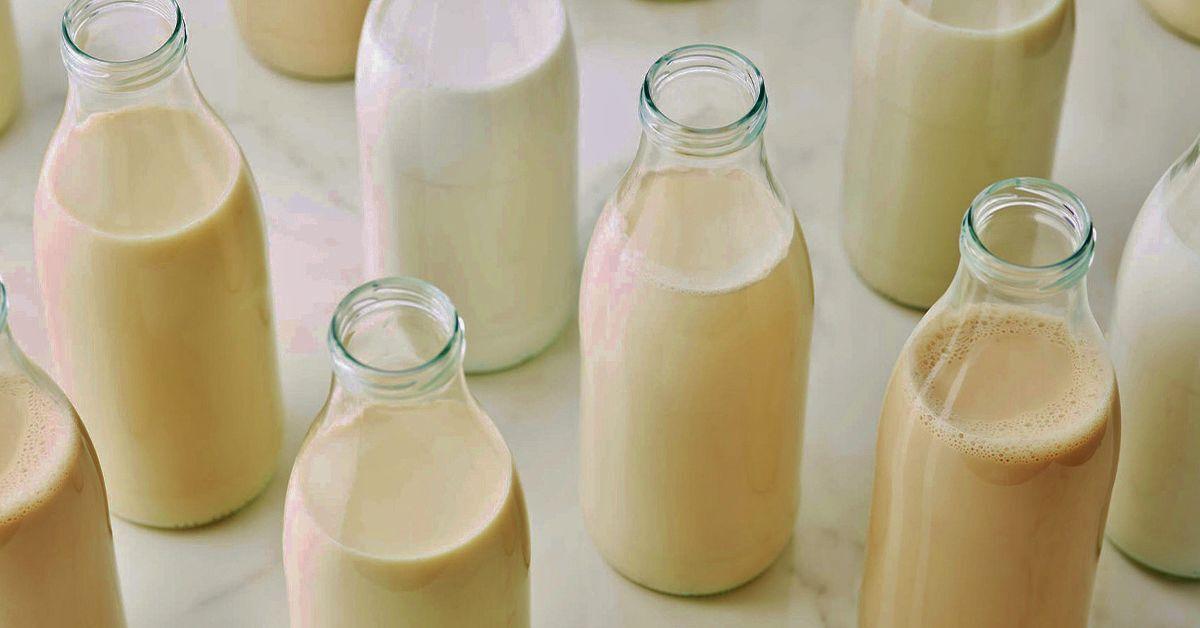 Reports from across the country indicate that milk production continues to exceed prior-year levels in most places – and is growing seasonally as spring approaches. The U.S. Department of Agriculture’s recent cattle report confirmed the national milking herd at the turn of the year totaled 9.44 million head – the largest number since 1995.

Not even Punxsutawney Phil’s declaration of an extended winter could freeze the dairy markets this past week. Most commodities kicked off February with price fluctuations as new market information collided with the realities of supply and demand. Reports from across the country indicate that milk production continues to exceed prior-year levels in most places – and is growing seasonally as spring approaches. The U.S. Department of Agriculture’s recent cattle report confirmed the national milking herd at the turn of the year totaled 9.44 million head – the largest number since 1995.

However the number of heifers expected to calve declined to the smallest levels in more than a decade, indicating there are fewer replacements waiting in the wings. The USDA’s recent “Dairy Products” report confirmed suspicions that plentiful milk supplies led to ample dairy-product production in December. Class IV products in particular capitalized on the available milk, with butter production hitting a December record of 205.5 million pounds – representing a year-over-year increase of 11.8 percent. Dryers were also clearly active in December, with combined production of nonfat-dry-milk and skim-milk powders increasing 6.8 percent for the month. 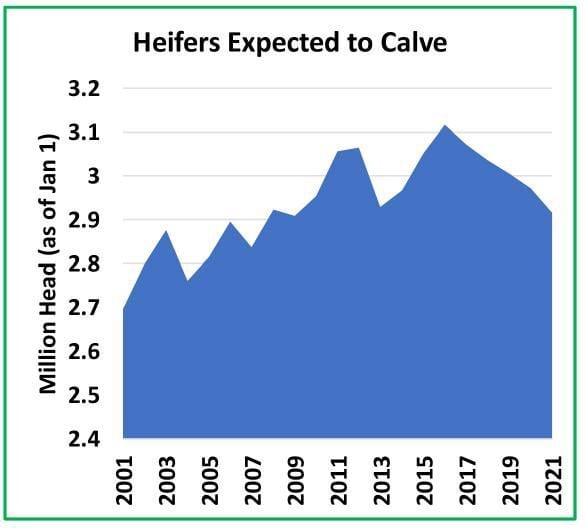 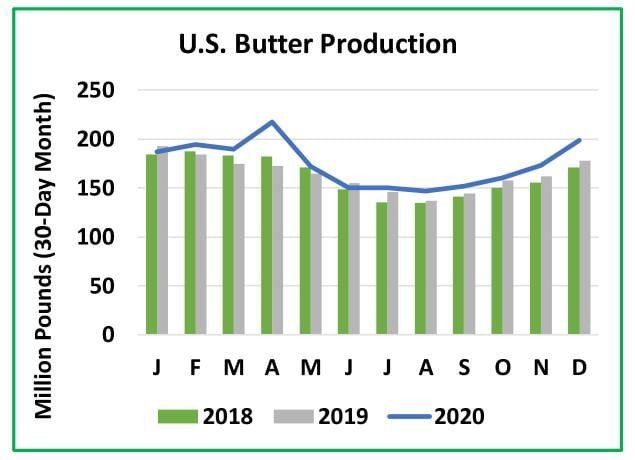 On the Class III side, cheese manufacturers increased production by 0.5 percent, demonstrating a preference for cheese that can be put into aging programs. Cheddar production climbed 1.2 percent while Mozzarella production slipped by 2.8 percent year-over-year. The abundant whey stream provided by cheese vats increased dry whey and whey-protein isolate production by 2.3 percent and 15.7 percent, respectively. Manufacturers indicate that spot milk can still be easily secured at a significant discount to class prices, though the number of available loads is easing. Thus strong dairy-product production is likely to persist into the coming months. 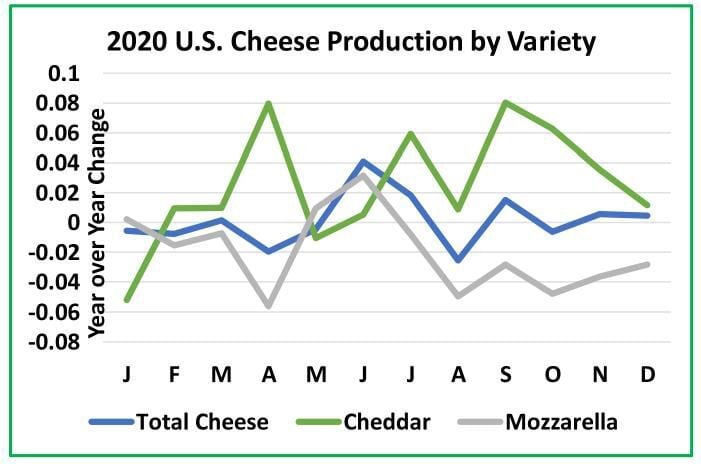 The Chicago Mercantile Exchange’s Cheddar block market was unsettled during the course of the past week. After finding some traction early on, block prices decreased Feb. 3 and 4, decreasing to $1.535 per pound before again Feb. 5. A 10.5-cent jump during trade Feb. 5 erased early losses, bringing the price to $1.64 per pound – an increase of 6.5 cents versus the previous Friday. Barrels staged a more-measured ascent, increasing steadily through the week to finish the Feb. 5 session at $1.50 per pound – 11 cents more than the previous week. Trade was active with 14 loads of blocks and 19 loads of barrels changing hands during the five days this past week. Cheese demand continues to be hurt by a lack of food-service activity though retail sales remain resilient. 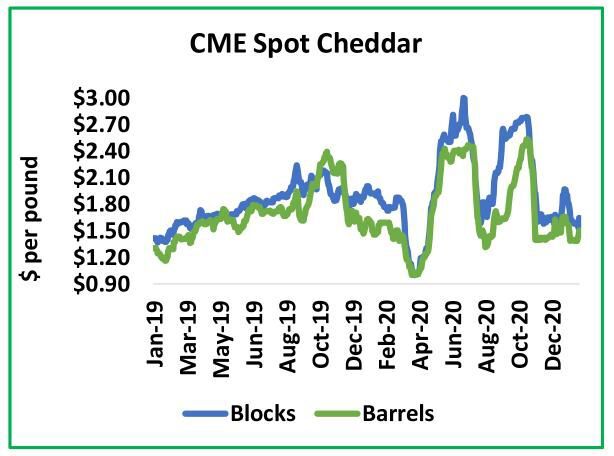 Spot-butter-market observers are also likely suffering from whiplash. A 3.5-cent decline Feb. 1 at the CME was followed by an 8.25-cent increase the next day. A strong result for fats at the Global Dairy Trade auction likely caused the increase, which was sustained Feb. 3. By Feb. 4, however, the gains began to be whittled away as the realities of the heavy production and inventory situation weighed on the market. Cream multiples have improved slightly, particularly as ice cream demand has increased in recent weeks. Nevertheless churns are keeping busy schedules and butter is reportedly plentiful.

CME spot butter ultimately finished the past week at $1.2675 per pound, 2.25 cents more than the prior Friday. U.S. trade data shows butter exports in December were stronger than they have been in years, due to renewed interest from Canada and Mexico as well as a record-large shipment to Bahrain. U.S. product remains at a significant discount to global competitors. If standardization issues can be overcome, the export market may help to clear some of the inventory.

Unlike butter, exports of nonfat-dry milk were weaker in December year-over-year, even as stronger shipments in earlier months increased annual exports by 15.6 percent versus 2019 after adjusting for the leap day. Logistical obstacles, namely a shortage of containers, likely resulted in reduced volumes moving abroad. Domestically there is a lot of condensed skim available and dryers are working hard to balance milk supplies. At the CME, nonfat-dry milk prices slid steadily through Feb. 4 before bouncing back and adding 2 cents during Feb. 5 trade. Nonfat-dry milk closed the week at $1.12 per pound, a decrease of 5.25 cents from the previous week. It was an active week for nonfat-dry-milk trade, with a record 33 loads changing hands Feb. 3. 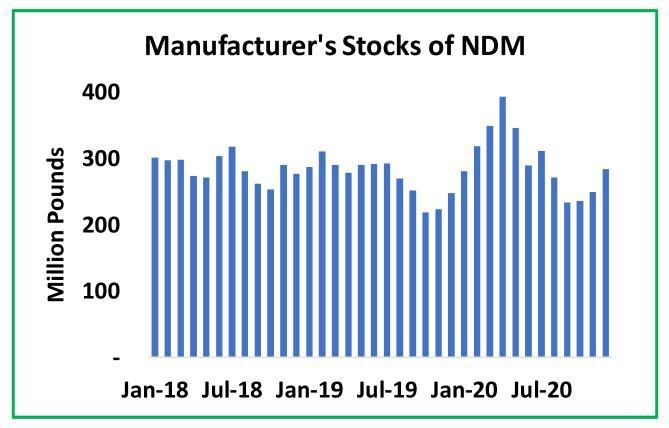 Bucking the trend, spot whey markets remained unchanged all week at 53.5 cents per pound with only one load moving. Though container availability is also an issue for whey traders, exporters were nevertheless able to ship 107.2 million tons of whey products during December. That was an increase of 27.5 percent versus the same month the previous year. Sustained buying interest from China increased 2020 cumulative whey exports by 23.4 percent compared to 2019. Though heavy cheese production has resulted in an ample whey stream, a preference for better-value protein products continues to keep supplies of dry whey in balance.

Milk futures were mixed for most of the week though spot cheese gains Feb. 5 decisively increased Class III contracts. The APR21 and MAY21 contracts settled limit up Feb. 5, breaching the $17-per-hundredweight threshold. Most Class IV futures contracts softened during the week until finding some life Feb. 5. Nevertheless it wasn’t enough to overcome earlier losses and most 2021 contracts finished about a quarter less than the previous Friday’s settlements.

In the soybean market nearby futures contracts have eased somewhat, but another round of concerns about the South American harvest is causing worry further into the future. After months of concerns about dry weather it is now, ironically, heavy rains that are threatening to delay the soybean harvest in Brazil and increasing prices. Corn prices were fickle during the course of the past week, but near-term contracts ultimately settled Feb. 5 close to prior-week values. Feed concerns remain a significant threat to producer profitability in 2021.

Reports from across the country indicate that milk production continues to exceed prior-year levels in most places – and is growing seasonally as spring approaches. The U.S. Department of Agriculture’s recent cattle report confirmed the national milking herd at the turn of the year totaled 9.44 million head – the largest number since 1995.