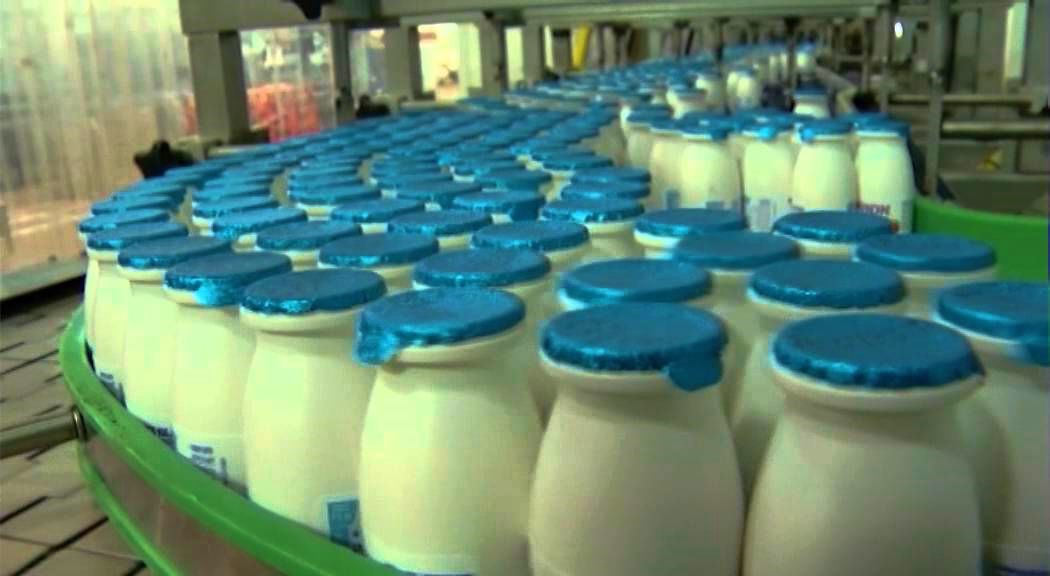 Milk production is at well more than projections in the Pacific Northwest; Idaho milk output continues to outpace processing capacity. Cooperatives are balancing supplies by hauling excess milk across great distances to California, Arizona and the Midwest.

Milk production is at well more than projections in the Pacific Northwest; Idaho milk output continues to outpace processing capacity. Cooperatives are balancing supplies by hauling excess milk across great distances to California, Arizona and the Midwest.

The winter is off to a mild start and the cows are loving it.

Milk yields and components remain good; milk is sloshing around as processors work to catch up after the holidays. The U.S. Department of Agriculture’s “Dairy Market News” reports that production is at well more than projections in the Pacific Northwest; Idaho milk output continues to outpace processing capacity. Cooperatives are balancing supplies by hauling excess milk across great distances to California, Arizona and the Midwest.

Good components mean lots of butterfat and demand is not keeping pace. Cottage cheese, ice cream and yogurt production lag the prior year by significant margins. Formidable Mozzarella output is using skim milk but leaving a lot of butterfat looking for a home. At home and abroad cream is cheap. Churns are running hard, piling product on top of an already burdensome stockpile.

There were 180.7 million pounds of butter in cold-storage warehouses as of Nov. 30. That’s 17 percent more than the prior year. Manufacturers churned out almost 156 million pounds of butter in November; that’s 4.4 percent more than the prior year. Exports continue to languish. Imports also slumped as new tariffs on European dairy products slowed the flow of Kerrygold to U.S. grocers. The United States is still home to some of the most expensive butter in the world, but global benchmarks have almost converged. Foreign-butter values may not be able to decrease the U.S. market much more. Inventories will continue to weigh. Chicago Mercantile Exchange spot butter closed this past Friday at $1.92 per pound, a decrease of 8.5 cents during the past three weeks. 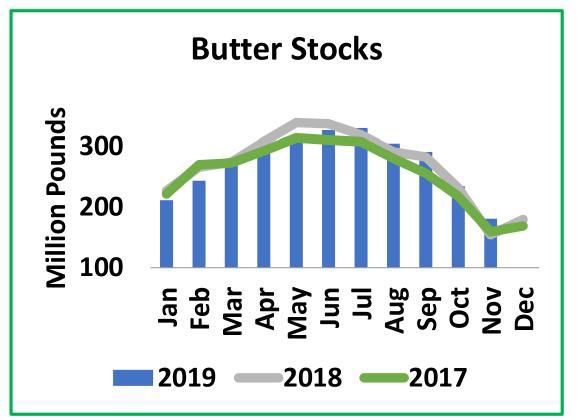 CME spot Cheddar barrels staged an end-of-year comeback, only to suffer a January swoon. Barrels finished at $1.525, the worst price since June. During the past three weeks barrels shed 14 cents. Blocks fared much better. They climbed a penny to $1.87. 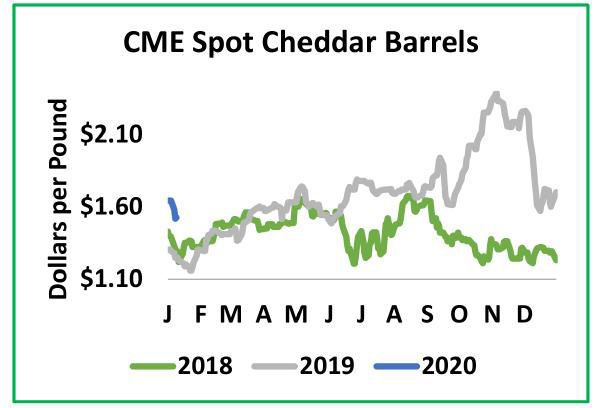 Cheese output reached 1.1 billion pounds in November, an increase of 0.5 percent from the prior year. Cheddar production was 1.2 percent less than in November 2018. That was a deficit, to be sure, but a much narrower one than those of September at -3.3 percent or October at -4.1 percent). Those prices allowed the barrel market to climb into the stratosphere in the fall. With only a modest decline in output, barrel values have come crashing down to earth.

There were 1.3 billion pounds of cheese in cold storage as of Nov. 30. That’s 2.1 percent less than the prior year. Inventories of American-style cheeses, which include commodity Cheddar, were 7.4 percent less than at the end of November 2018. But they are not scarce enough to justify cheese north of $2. Discounted milk is pushing a lot of tankers toward cheese vats, but domestic demand remains strong and exports impressed in November. 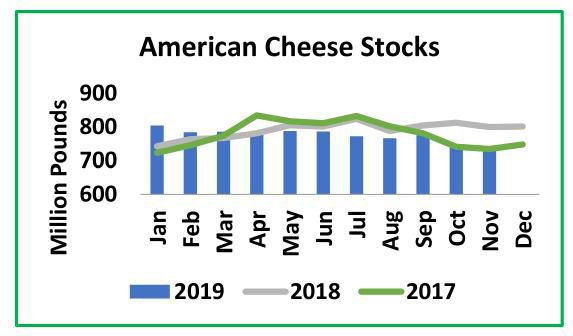 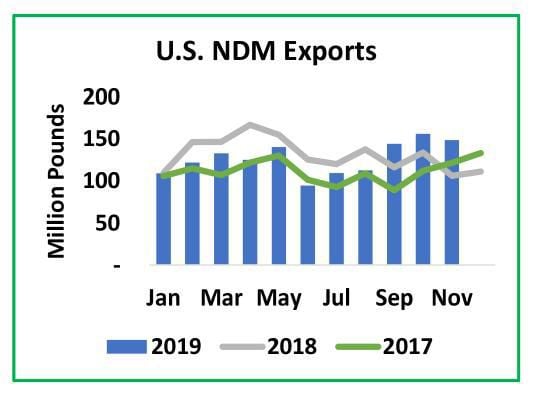 China has been taking in huge volumes of whole-milk powder from Australia and New Zealand, which has used much of the available milk in Oceania. That leaves room for both Europe and the United States to export record-breaking volumes of nonfat-dry-milk and skim-milk powder to other markets. Global milk-powder supplies are tightening; prices are climbing accordingly. At the Global Dairy Trade auction Jan. 7, skim-milk powder increased 5.4 percent to the equivalent of nonfat-dry milk at $1.46 per pound. CME spot nonfat-dry milk rallied to a fresh five-year best price. It closed this past Friday at $1.2725, an increase of 2.25 cents during the past three weeks. Even better prices are possible.

But African swine fever remains a major issue throughout Southeast Asia, which doesn’t bode well for global whey demand in the near term. Despite a strong showing in China, U.S. whey exports to all destinations decreased 8.1 percent from the prior year in November. Whey output and whey inventories continue to exceed this past year. Whey is historically inexpensive, but it has made a bit of a comeback. During the past three weeks CME spot whey increased 3.25 cents to 34.25 cents.

The selloff in CME spot Cheddar barrels decreased nearby Class III futures. The January and February contracts finished at about $17 per hundredweight. Those two contracts have lost about 40 cents in the past few weeks. But most other Class III futures settled a little better than where they stood heading into the holidays. Nearby Class IV futures lost some ground, but deferred contracts rallied. Class IV futures project milk at more than $18 in the second half of the year.

The market is unsettled as it tries to digest all the holiday excess. But demand is good. Growth in U.S. milk production is likely to remain modest for a time, particularly if Class III can do no better than $17. Similarly modest growth is expected in Europe. Wildfires and record-breaking heat will continue to depress milk output “Down Under;” collections are expected to remain at less than the previous season in New Zealand. The dairy markets seem resolved to improve their health in 2020. Prices seem likely to land in the sweet spot that allows a margin for producers without climbing to prices that would encourage rapid expansion and destroy demand.

The USDA released a slew of anticipated crop reports this past Friday, and the markets greeted the new data with a yawn. The agency surprised the trade by increasing its estimate of the corn and soybean crops relative to the December report. But both yields and production are noticeably less than recent years; traders likely discounted the official total due to widespread quality issues this year. Much of the crop remains in the field. The USDA will need to re-survey farmers in Michigan, Minnesota, the Dakotas and Wisconsin to refine their crop assessments when they finally have a chance to finish harvest. The strong basis throughout the Corn Belt also reflects the scarcity of commodity-grade corn, despite what appears to be a healthy harvest on paper. 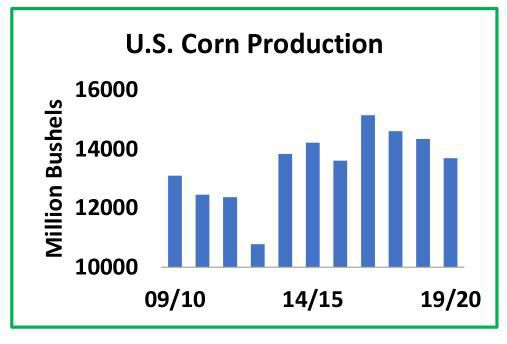 The USDA’s quarterly Grain Stocks estimates revealed stronger-than-expected demand. That, coupled with skepticism about the size and quality of this year’s crop, allowed the grain markets to rally this past Friday. Expectations for better exports in the wake of the Phase One trade deal also heartened the bulls. March corn settled this past Friday at $3.8575, 2 cents less than its pre-holiday trade. March soybeans finished at $9.46, an increase of almost 8 cents in the past two weeks.