At 9.37 million head the national dairy herd is 37,000 head larger than it was a year ago. Dairy producers are no longer culling hard. They slammed on the brakes in late May and made a U-turn.

At 9.37 million head the national dairy herd is 37,000 head larger than it was a year ago. Dairy producers are no longer culling hard. They slammed on the brakes in late May and made a U-turn.

The dairy markets staged a rip-roaring rally this past week. Chicago Mercantile Exchange spot Cheddar blocks led the way. They increased 13 cents this past week to $2.65 per pound, an all-time best price. A steep decline in milk output in May likely slowed cheese production and tightened the supply of fresh cheese for sale in Chicago, prompting the remarkable run in the spot market. Meanwhile grocery stores continue to move product, restaurants are restocking and government purchases plod on. This past week the U.S. Department of Agriculture announced funding for another round of food-box donations in July and August, along with a planned purchase of Mozzarella cheese shreds. Clearly the government intends to keep helping the cheese market despite the fact that it’s at record prices and increasing. 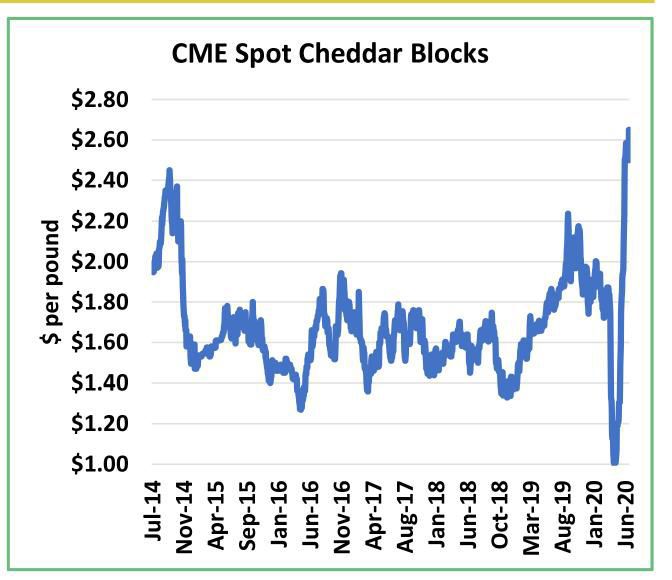 Barrels are less scarce. They slipped 4.75 cents this past week to $2.285. Excellent prices are clearly stimulating cheese production and are starting to cap demand. The USDA’s “Dairy Market News” reports that lofty values are pushing some buyers to the sidelines.

CME spot whey increased as well. It finished June 19 at 32.75 cents, a penny more than June 12. With both cheese and whey prices increasing, nearby Class III futures increased sharply. The July contract surged $2.64 to $21.18 per hundredweight. August increased $2.25 to $19.28. The other 2020 contracts gained 80 cents on average.

The Class IV markets were mixed. July futures decreased 45 cents to $14.82. Deferred contracts mostly improved. CME spot butter decreased 2 cents this past week to $1.85. Cream supplies are still tight but churning activity may be more than year-ago levels later this summer as ice cream production fades. According to Dairy Market News, “a growing number of butter-market actors suggest they’re concerned about inventories coming into the fall,” because food service is still at well less than normal. 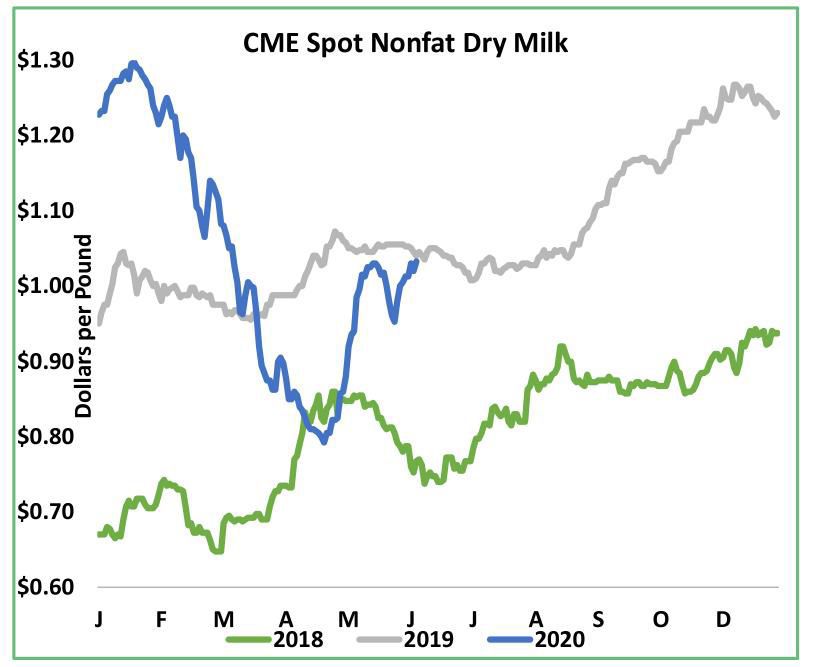 Amidst painfully depressed milk prices and punitive overproduction schemes, U.S. milk production decreased sharply in May. Output totaled 18.84 billion pounds, a decrease of 1.1 percent from the prior year, the steepest year-over-year decline since October 2014. Dairy producers did much to slow milk production this past month. They culled many, fed cheaper rations, dried cows early and milked less frequently. Milk yields decreased accordingly.

Production per cow averaged 2,010 pounds, a decrease of 31 pounds or 1.5 percent from May 2019. Milk output decreased the worst in the Northeast, Pacific Northwest and Midwest. Milk output was more than May 2019 volumes in much of the Southwest, but production plunged 7.2 percent year-over-year in New Mexico.

The dairy herd contracted 11,000 head in May, building on the 4,000-head decline in April. Still at 9.37 million head the herd is 37,000 head larger than it was a year ago. Dairy producers are no longer culling hard. They slammed on the brakes in late May and made a U-turn. After two months of contraction the milk-cow head count is likely headed in the opposite direction. Milk at $20 will surely motivate dairy producers to fill their tanks. But the actions they took to slow production in May could drag on milk yields this summer and the heat won’t help. 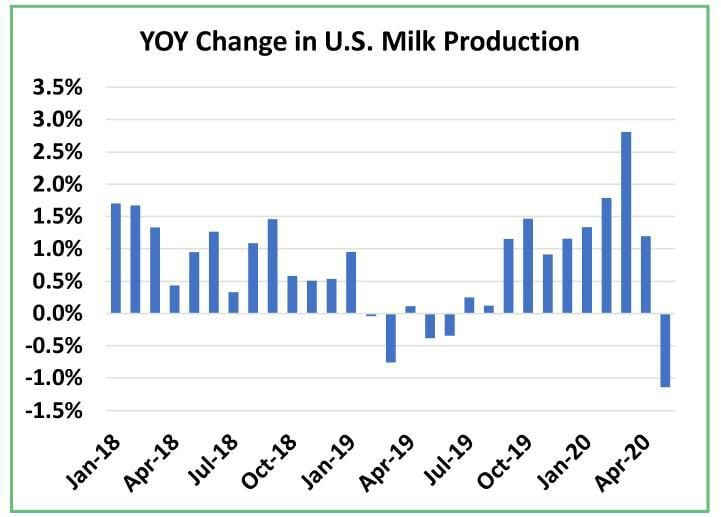 European milk output was muted in April. Collections totaled 31 billion pounds, an increase of 0.2 percent from the prior year. That’s the slowest growth in European Union-28 milk output in 11 months, which helped to prevent dairy products from piling up during widespread lockdowns. European dairy-product prices are bouncing back from the depths they plumbed this spring.

The pandemic walloped dairy demand in March and April. But thanks to slight growth in Europe and a big step back in U.S. milk production in May, the global dairy markets were able to endure the blow. But that doesn’t mean there’s room for a lot of new milk. Rabobank estimates food-service demand will not return to pre-COVID-19 levels for at least two years. That means the U.S. and European dairy industries will depend on exports as an outlet for any advances in milk production. That may require much-reduced milk prices later this year. With cheese well north of $2 per pound and butter futures at about $1.90, the United States is likely not winning a lot of export business. 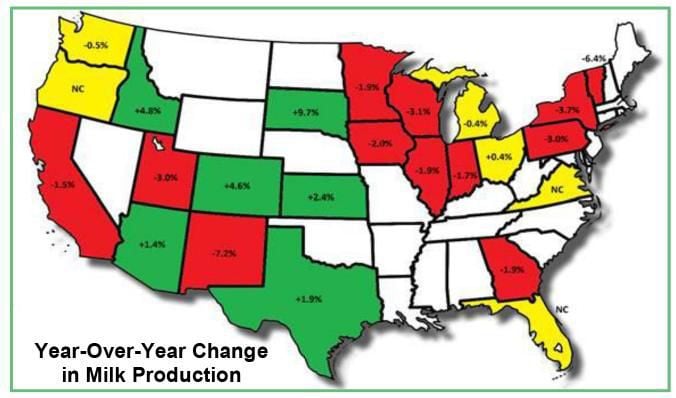 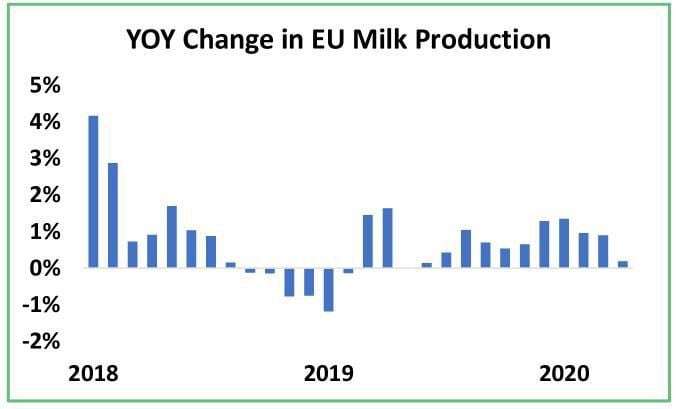 The feed markets improved this past week. July corn futures closed at $3.325 per bushel, an increase of 2.5 cents from June 12. July soybean futures rallied 5.25 cents to $8.765. July soybean meal decreased $2 to $287 per ton. Chinese purchases have helped to boost the soybean market to two-month best prices. And there’s talk that China may increase orders for U.S. corn and ethanol.

Row crops are safely in the ground and the weather is largely benign. The dry spell has lasted a bit longer than is ideal, but most of the Corn Belt saw showers this past weekend. Given massive global grain stocks, the corn market isn’t likely to rally much farther in the absence of a weather issue.