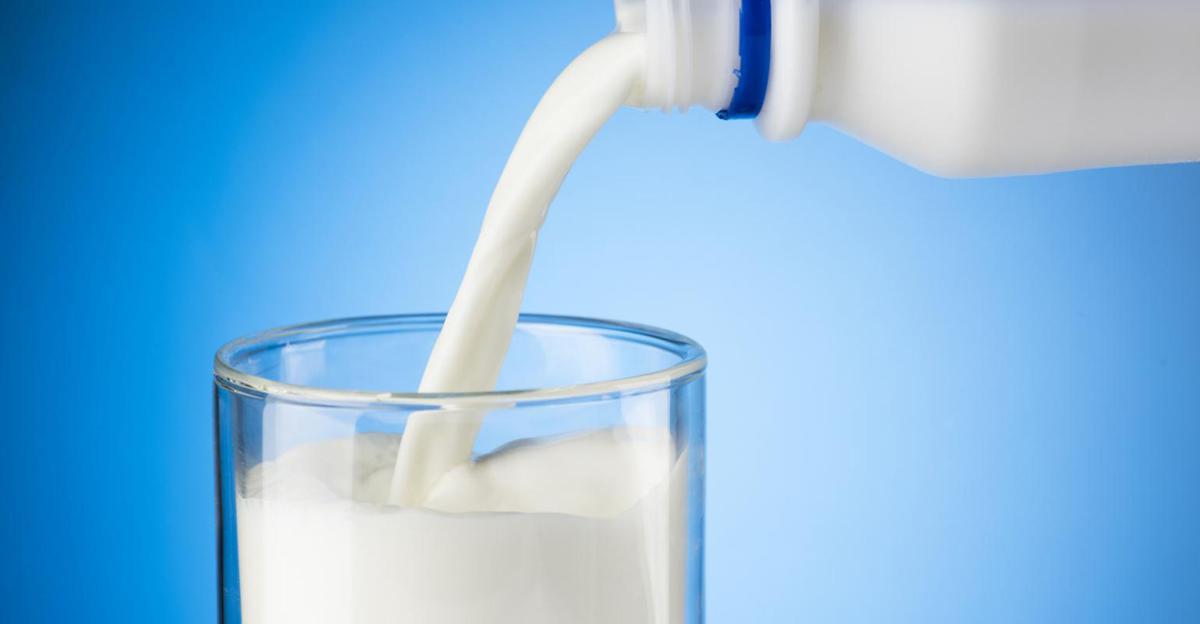 A dramatic expansion in the national dairy herd is driving an increase in production. Between June and December 2020, U.S. producers added an astonishing 93,000 cows to the herd – bringing December’s cow numbers to the largest figure seen since 1995.

Milk is gushing across the United States. The U.S. Department of Agriculture’s “Milk Production” report released Jan. 25 indicated that milk production in December reached 18.941 billion pounds, 3.1 percent more than the same month the previous year. Total production for the year is believed to have grown by 1.9 percent, after accounting for Leap Day.

A dramatic expansion in the national dairy herd drove much of the increase. Between June and December, U.S. producers added an astonishing 93,000 cows to the herd – bringing December’s cow numbers to the largest figure seen since 1995. Yields also had a hand in the surge, with U.S. milk per cow breaching 2,000 pounds in December for the first time ever. 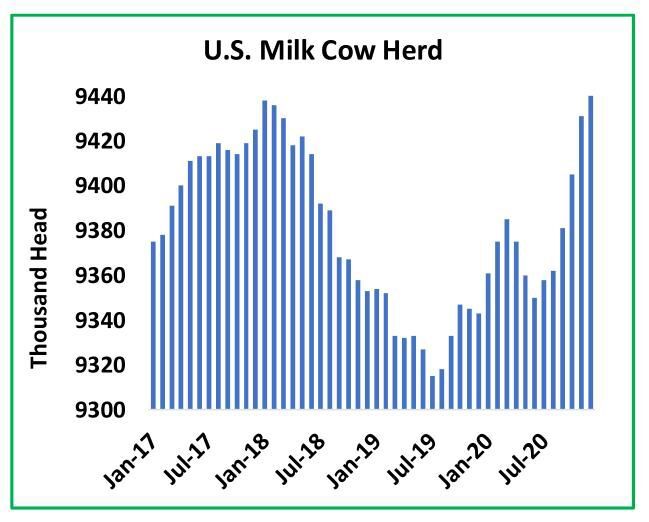 Milk-production growth was strong across most of the United States in December, with the West and the Midwest posting particularly convincing figures. California alone increased production by 3.2 percent year-over-year, equivalent to an additional 110 million pounds. Each of the country’s strongest-nine dairy states saw output expand by at least 1.2 percent for the month; only a smattering of states saw production declines. Among them Florida and Vermont saw production contract by 5 percent and 3.1 percent, respectively. Georgia, Utah, Oregon and Washington all witnessed more-modest decreases. Favorable weather is generally believed to have helped support continued milk-production growth across most of the country into January. Though frigid temperatures in the upper Midwest pushed back on production late in the month, the effect is likely to be short-lived. 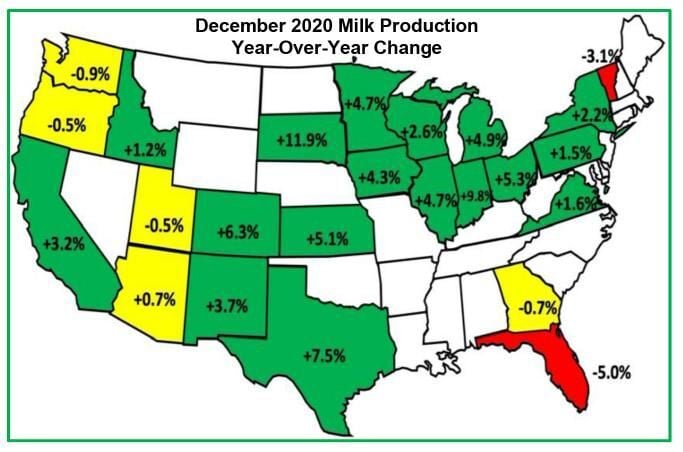 With plentiful milk and the pull from Class I users still underperforming prior years, there’s more than enough available for manufacturing uses. In most parts of the country spot milk can be bought at a discount to class values. The USDA reported that in the Midwest spot milk for cheese manufacturing could be acquired with discounts as large as $8.50 to the Class III price. But even as spot milk remains abundant, there are some signals the tide may be shifting with manufacturers increasingly reporting that spot loads are becoming less available.

Cheese manufacturers across the country have been running hard. Retail demand has been strong in most parts of the country, but food-service sales remain largely depressed. As a result much of the production has been routed into storage. In the USDA’s “Cold Storage” report released Jan. 25, total cheese stocks at the end of the year amounted to 1.398 billion pounds. Between November and December, total cheese inventories grew by more than 50 million pounds, almost 10 times the average increase during that period during the previous five years. Three-quarters of the increase was driven by growing American cheese stocks though other cheese styles saw inventories amass as well. 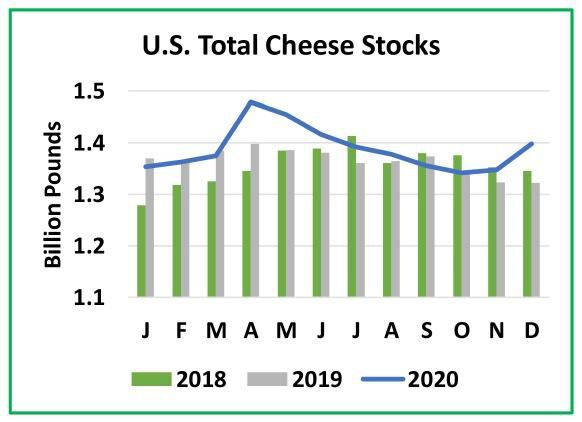 The Cheddar spot markets responded to the slack by moving downward during the course of the past week. By Jan. 29 spot block Cheddar prices had sacrificed 3.5 cents to finish the week at $1.575 per pound, the worst price since May 2020. Barrels demonstrated a bit more resilience. After increasing modestly Jan. 30, the market once again slid backward. It ultimately closed the Jan. 29 spot session at $1.39 per pound, a quarter-cent less than the previous week. While not a single load of blocks traded hands, 21 loads of barrels managed to move during the week.

Meanwhile the butter markets featured a more-dramatic descent. Also weighed down by excessive supply, Chicago Mercantile Exchange spot butter markets decreased 15.75 cents since Jan. 22, closing this past week at $1.245 per pound. Churns across the country, but especially in the West, report they are working furiously as they try to use available cream supplies. Retail interest is at least steady and the food-box program has helped to clear some product; but nevertheless inventories remain heavy. The USDA reported that at 273.8 million pounds, butter stocks at the end of December were the strongest they had been at that time of year since 1992. Furthermore, given that any of this product that was manufactured prior to Dec. 1 can only be sold at the CME until the end of February, the market is likely to struggle finding traction in the next couple of weeks. 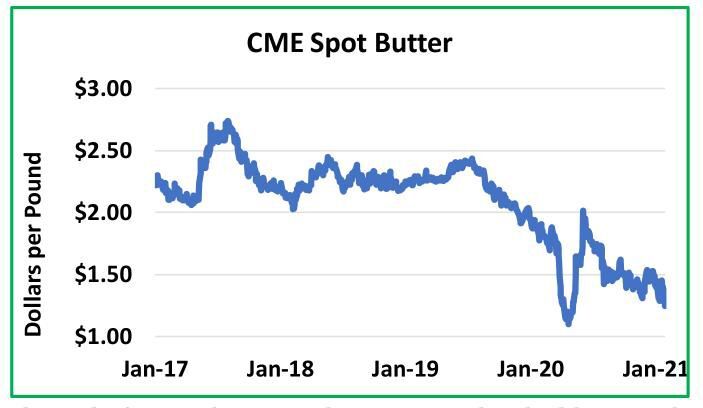 Dry products have posted mixed performance since Jan. 25. Nonfat-dry-milk spot prices decreased to $1.1375 per pound Jan. 26 before bouncing back to close the week at $1.1725 per pound, unchanged versus the previous Friday. Though product is purportedly plentiful, the buyers were present in Chicago this past week with 37 loads of nonfat-dry milk moving. Dry whey, which has been bullish of late, stumbled Jan. 26 for the first time this year, decreasing 4.25 cents. But the move was short-lived; by the next day growth had resumed. Yet spot whey was unable to erase the entire loss. By the time the market closed Jan 29 at 53.5 cents per pound it remained half a penny less than the prior week. 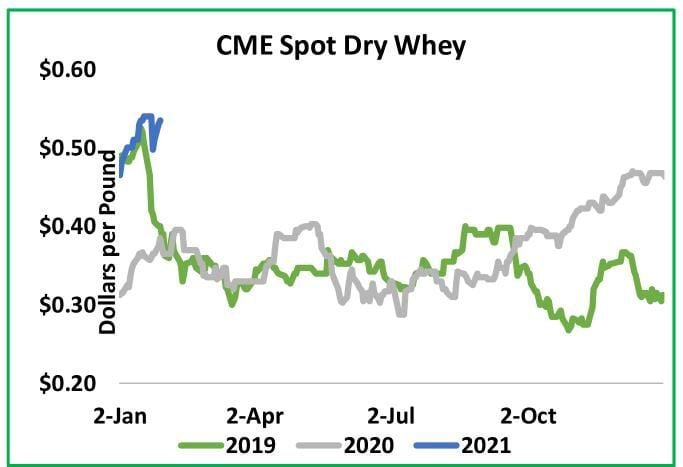 Milk futures incorporated the weakness of the spot markets, moving downward during the course of the week. Class III markets softened in particular, with most 2021 contracts losing value early in the week. They recovered in the middle of the week but returned to the red Jan. 29. FEB21 and MAR21 Class III contracts settled $1.1 and 90 cents less than the previous Friday, respectively. Class IV markets also saw values deteriorate, with big declines early in the week and Jan. 29. Despite some recovery midweek, nearby contracts also decreased by about 50 cents.

Feed prices are poised to continue threatening producer profitability in the coming months. After settling the previous Friday on a weaker note, nearby corn futures rallied this past week pushing MAR21, MAY21, and JLY21 contracts to more than $5.36 per bushel. The USDA’s announcements about large corn exports to China have renewed concerns about grain availability. Soybean futures also increased through Jan. 27, took a breather Jan. 28 and increased once more Jan. 29. The three nearby contracts are all now sitting at more than $13.48 per bushel.

The farm economy turnaround since August has sent ripples into the farmland market. Recent data from the Kansas City and Chicago Federal Reser…

Chinese New Year celebrations may be ushering in the Year of the Ox, but here in the U.S. dairy markets the bears are still very much present.…

Not even Punxsutawney Phil’s declaration of an extended winter could freeze the dairy markets this past week. Most commodities kicked off Febr…

The Ag Economy Barometer decreased in January to a reading of 167, a decline of 7 points compared to December and equal to the index’s Novembe…

A dramatic expansion in the national dairy herd is driving an increase in production. Between June and December 2020, U.S. producers added an astonishing 93,000 cows to the herd – bringing December’s cow numbers to the largest figure seen since 1995.