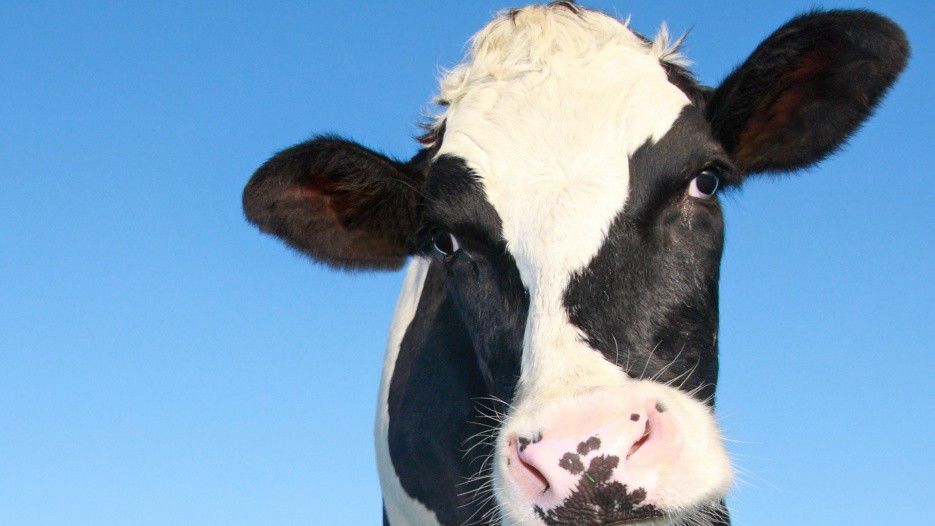 The Farm Service Agency reports more than 18,900 operations or 75 percent of all dairy farms with established production history are enrolled in the Dairy Margin Coverage program for the 2021 calendar year.

The Farm Service Agency reports more than 18,900 operations or 75 percent of all dairy farms with established production history are enrolled in the Dairy Margin Coverage program for the 2021 calendar year; enrollment closed Dec. 11, 2020. That’s a 50 percent increase from 2020 when about 50 percent of all dairy operations were enrolled. Part of the increase is due to the extreme price volatility experienced as a result of market fluctuations induced by the COVID-19 pandemic; that pushed many to enroll in an attempt to manage future risk exposure. Recent news of a seventh-consecutive month of payouts has many producers grateful for the enrollment decision.

The Dairy Margin Coverage program exists to provide a level of risk protection to dairy producers under reduced margin conditions when milk prices are reduced and or feed costs on average are inflated. The voluntary program provides payments when the calculated national margin falls to less than a producer’s selected coverage trigger. The margin is the difference between the average price of feedstuffs – the price of hay, corn and soybean meal – and the national all-milk price.

Producers are required to select a margin trigger rate and a percentage of production history to be covered – traditionally capped at 5 million pounds. Coverage is available for margins between $4 and $9.50 under a Tier I CAT or catastrophic level, or between $4 and $8 for a Tier II level in $0.50 increments. Producers who select coverage triggers at or more than the $4.50 level must pay per-hundredweight premiums ranging from $0.0025 to $1.813 per hundred pounds of milk enrolled, depending on the tier and trigger rate selected. All enrolled producers must also pay a $100 administration fee. Producers who only select the $4 coverage trigger do not pay premiums. Production-history selection ranges from 5 percent to 95 percent – in 5 percent increments – of a producer’s established production history.

Under the Agriculture Improvement Act of 2018, known as the 2018 farm bill, production history for each operation is established using the biggest number of the operation’s marketings from the 2011, 2012 or 2013 calendar years. Under that framework, production history for an operation would not change even if farm characteristics such as the size of the herd were altered. This past December the new Consolidated Appropriations Act of 2020 made supplemental Dairy Margin Coverage based on 75 percent of the difference between 2019 marketings and the old base calculation – 2011-2013 milk marketings. The new policy allows operations to option for greater milk-production coverage if changes to herd size were made since the 2011-2013 basis years. Though currently the law of the land, the U.S. Department of Agriculture has yet to release further guidance, or details on when or how the program change would be implemented. That leaves the 2018-farm-bill framework currently in effect. 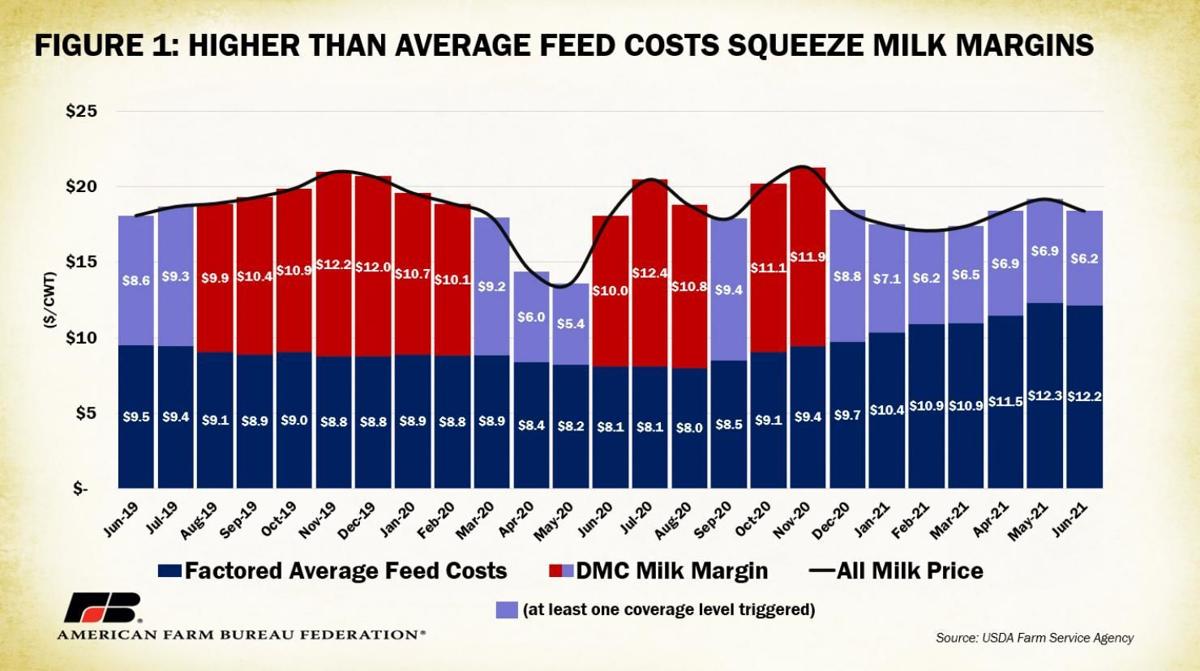 Most of the increasing trend in feed costs can be linked to corn and soybean-meal prices that have remained more than average since this past summer. Backed by strong exports and reduced supply expectations globally, increased feedstuff prices further pressure the solvency of livestock and dairy farms. Though not as severe of an increase, the blended alfalfa price has experienced a recent increase. That’s at least partially linked to severe drought conditions across western states that account for 57 percent of the nation’s hay production by value. 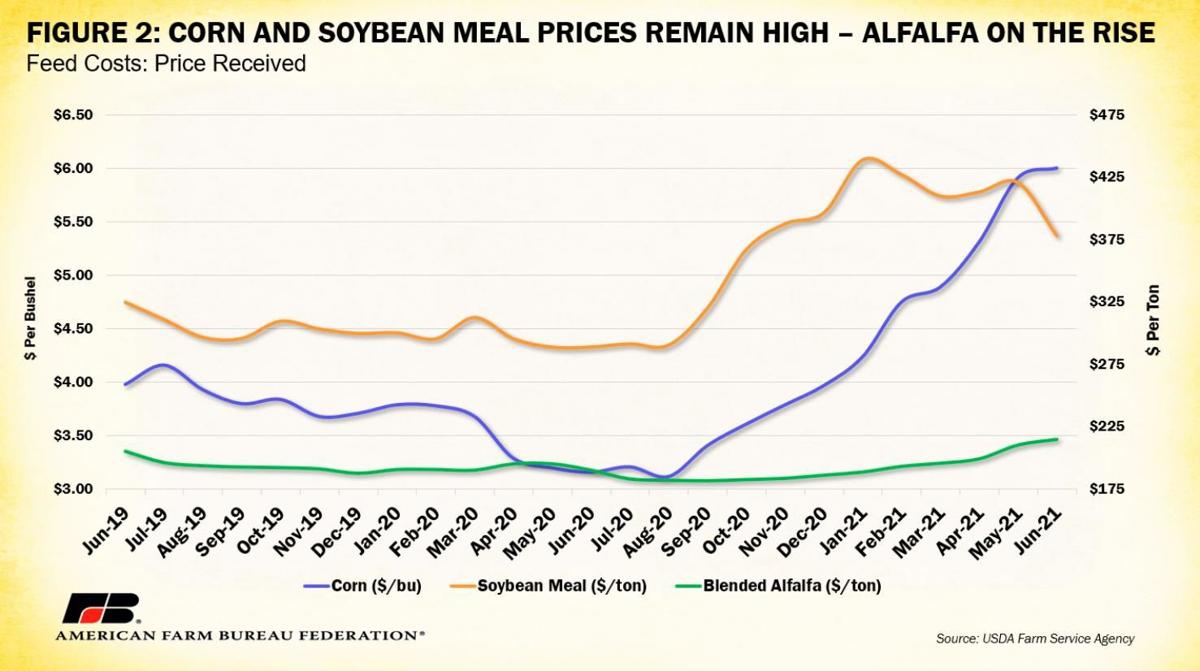 Dairy farmers have also outpaced milk-production expectations across the board. Milk production per cow increased 0.2 percent in the first quarter and 2.2 percent in the second quarter from 2020 levels, thanks to continued advancements in dairy-herd management.

In its February outlook, the USDA forecasted a 1 percent increase in national milk production in the first quarter and a 3.59 percent increase for the second quarter. They were surpassed by actual increases of 1.07 percent and 3.69 percent, respectively. Record supply can be linked to a record national dairy herd at more than 9.5 million strong as of July 1. In addition new processing plants in the upper Midwest increased demand for milk, prompting several large-scale expansions in the region and helping drive the increase. Heavy supply conditions negatively pressure milk prices and margins, especially in regions with reduced regional consumption. 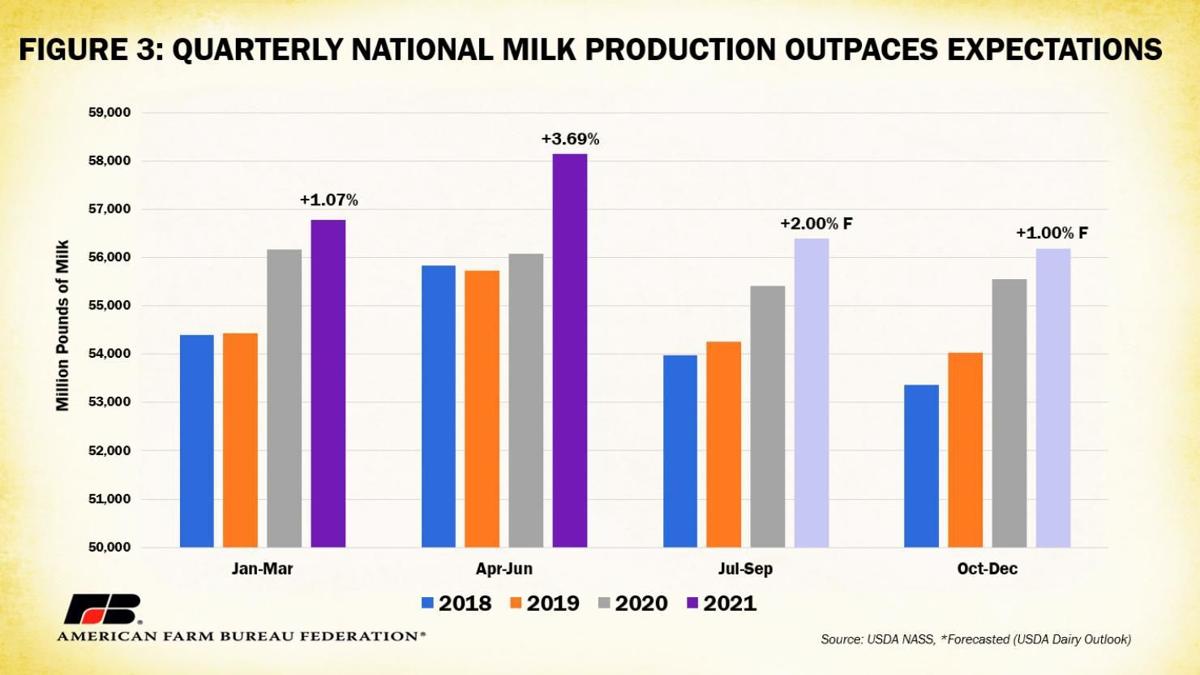 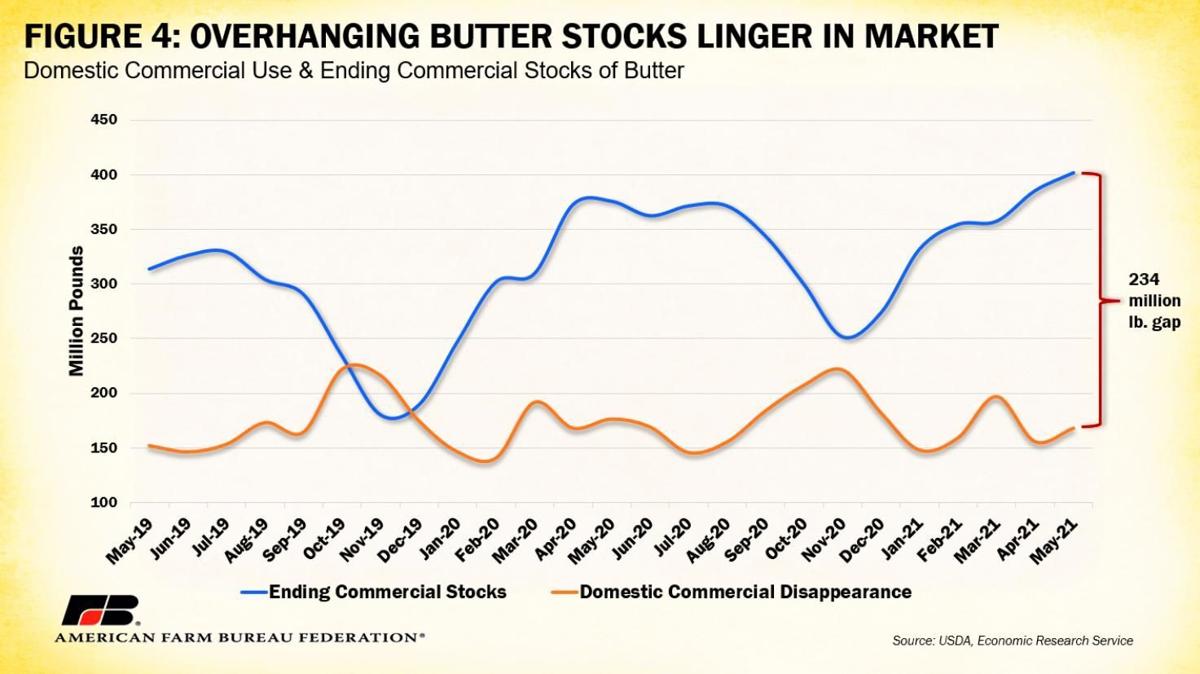 Strong export conditions for U.S. dairy present a positive note for farmers struggling from domestic margin rates. In the latest export data, January-June 2021 showed the biggest levels of dairy-product exports by value in history, with $3.739 billion worth of product sold across borders. That’s compared to $3.308 billion in 2020 and $2.896 billion in 2019. It translated to $1.379 million metric tons of dairy product exported from U.S. borders, a 12 percent increase in volume from 2020. 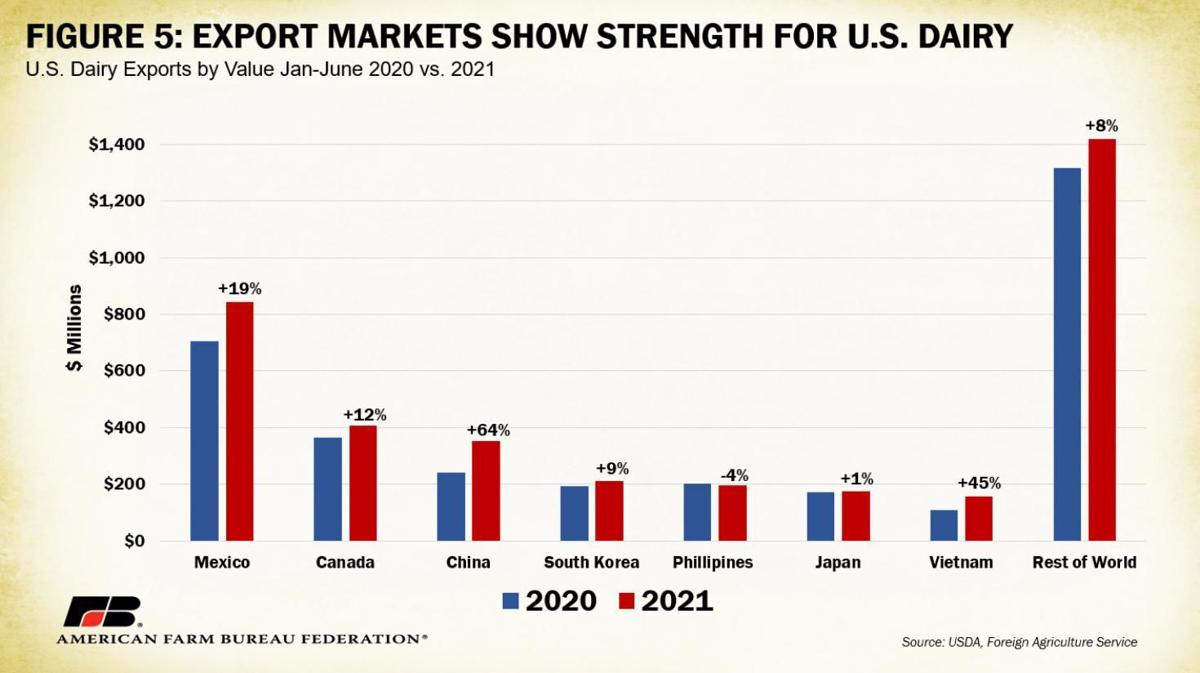 Risk-management programs like the Dairy Margin Coverage program provide a revenue buffer for producers feeling the tight squeeze of shrunken operational margins. Persistently increased feed prices, strong domestic supply and large product stocks will continue to pressure those margins from both the cost-of-production and market-price angles. Although exports offer an opportunity for supply relief, short-run market conditions have triggered program payments for producers at or more than the $6.50 margin rates for Tier I and II protections. Until feed costs recede or the all-milk price increases to a margin greater than $9.50, at least some producers will continue to receive program payouts.

The monthly World Agricultural Supply and Demand Estimates, released Sept. 10 by the U.S. Department of Agriculture’s Office of the Chief Econ…

The Class IV market is heating up. CME spot butter jumped 9ȼ this past week to $1.7975 per pound.

The Farm Service Agency reports more than 18,900 operations or 75 percent of all dairy farms with established production history are enrolled in the Dairy Margin Coverage program for the 2021 calendar year.