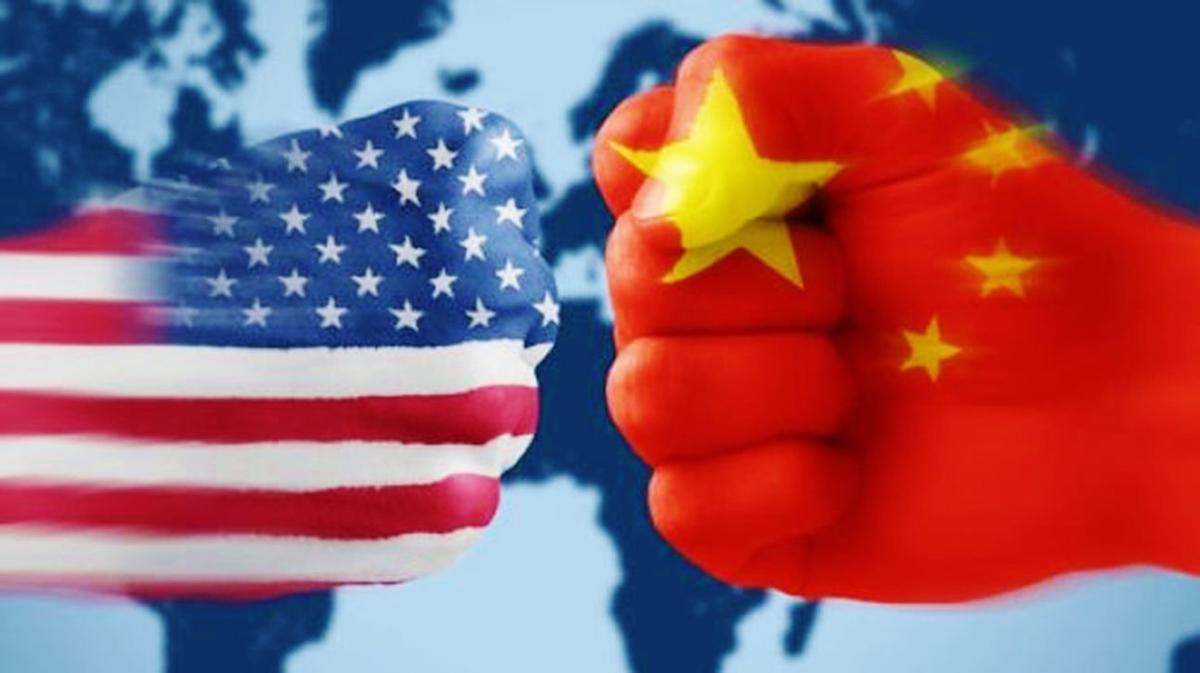 A sharp improvement in producer future expectations coincides with President Donald Trump’s signing Jan. 15 of the “Phase One” trade agreement between the United States and China.

A sharp improvement in producer future expectations coincides with President Donald Trump’s signing Jan. 15 of the “Phase One” trade agreement between the United States and China.

The Ag Economy Barometer increased to a reading of 167 in January, a 17-point jump from December when the index stood at 150. Virtually all the increase in this month’s barometer was attributable to a sharp increase in optimism about future conditions in agriculture. The Index of Future Expectations climbed 24 points to 179, while the Index of Current Conditions at 142 was essentially unchanged from the December reading of 141.

The Ag Economy Barometer survey is based on responses from a nationwide survey of 400 agricultural producers; this month’s was conducted Jan.13-17. The sharp improvement in future expectations coincided with President Donald Trump’s signing Jan. 15 of the “Phase One” trade agreement between the United States and China. In the agreement China agrees to increase purchases of U.S. manufacturing, energy and agricultural goods and services by at least $200 billion through two years. But it didn’t include specific information regarding which U.S. goods and services would benefit from the purchases. 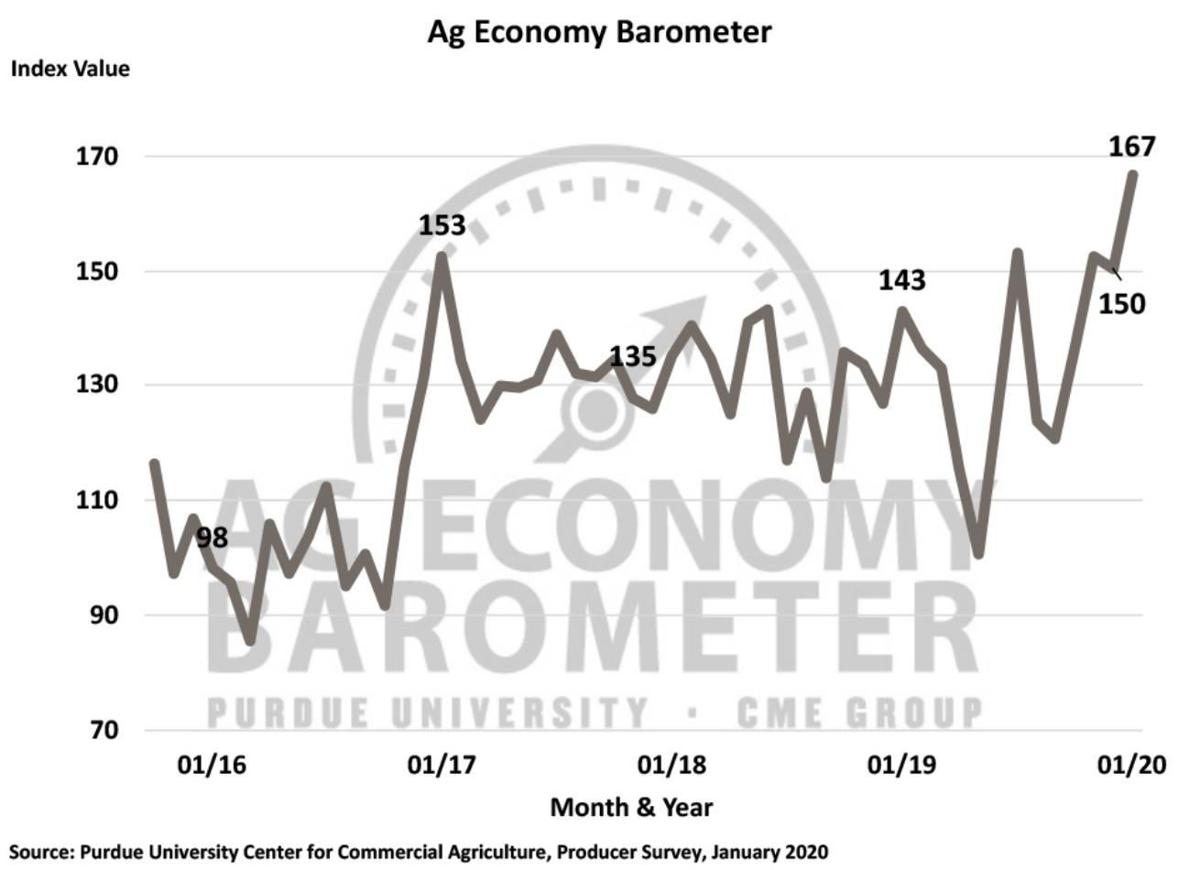 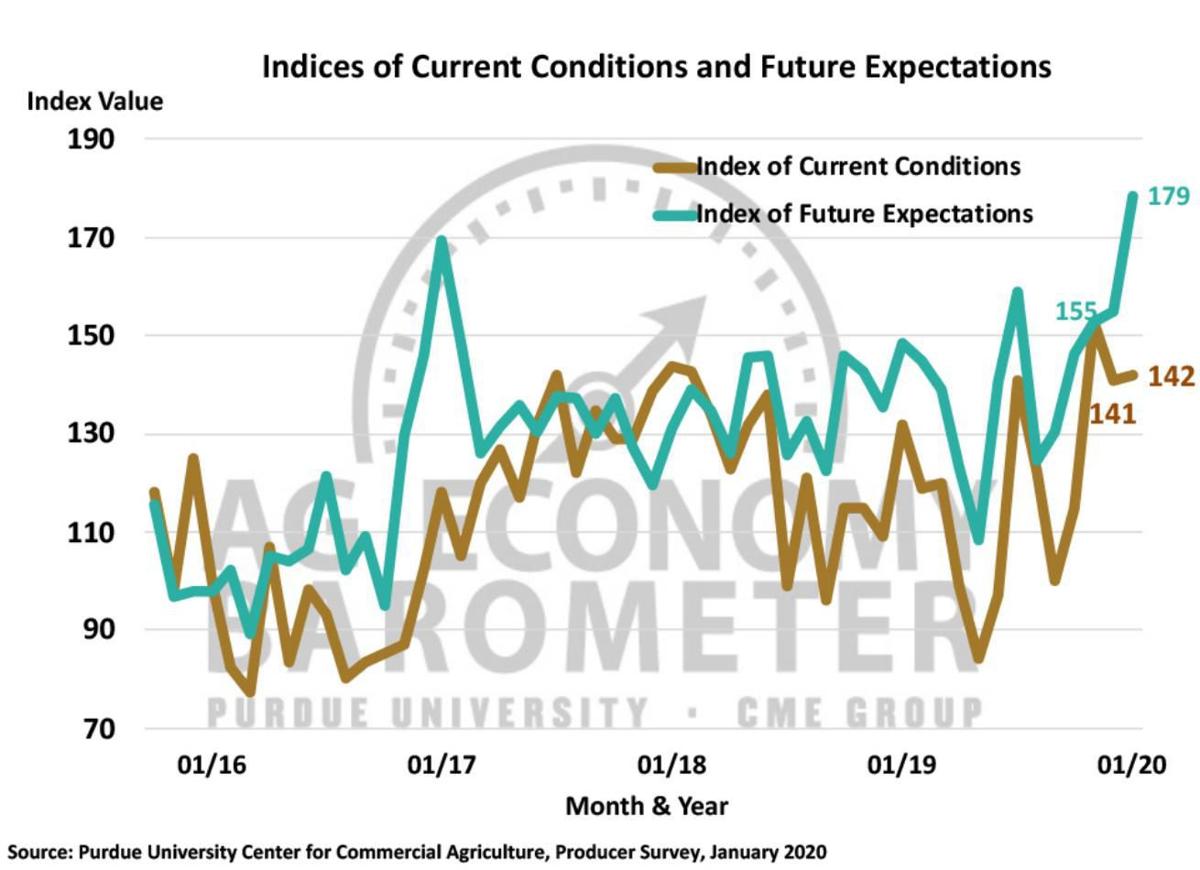 Agricultural producers have become noticeably more optimistic about the future of agricultural trade during the past several months. As recently as October just 55 percent of the farmers in our survey said they expect to see U.S. ag exports increase during the next five years. That changed in November and continued through the January survey as 70 percent to 71 percent of survey respondents said they expect to see ag exports increase in the upcoming years. 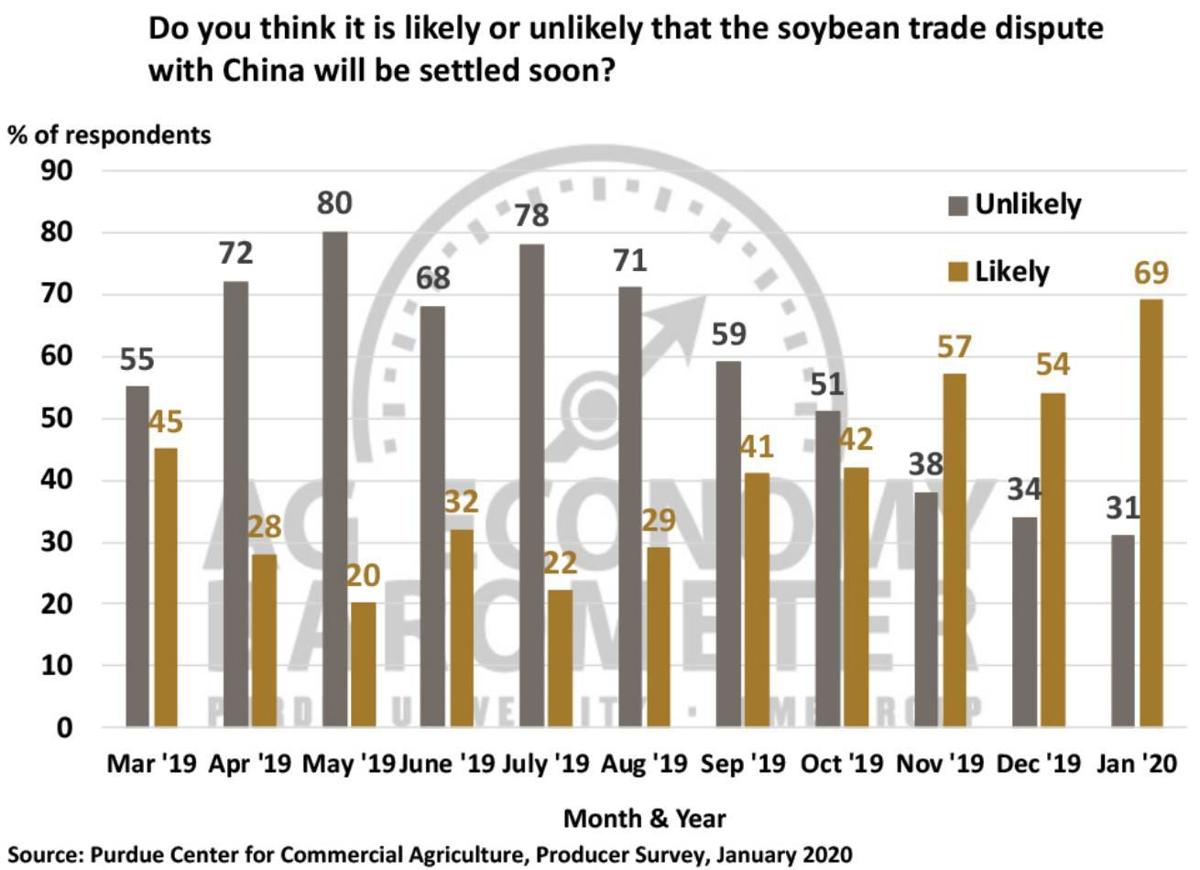 Despite the big improvement in future expectations among farmers in our survey, the Farm Capital Investment Index in January actually decreased 4 points from December to a reading of 68. The index is based upon a question that asks farmers whether now is a good or bad time to make large investments in things like farm machinery and buildings. The index has ranged from the high 60s to the low 70s since November. Despite the small decline in the January reading, the number remains much stronger than it was in late summer and early fall when it ranged from the high 40s to the high 50s. 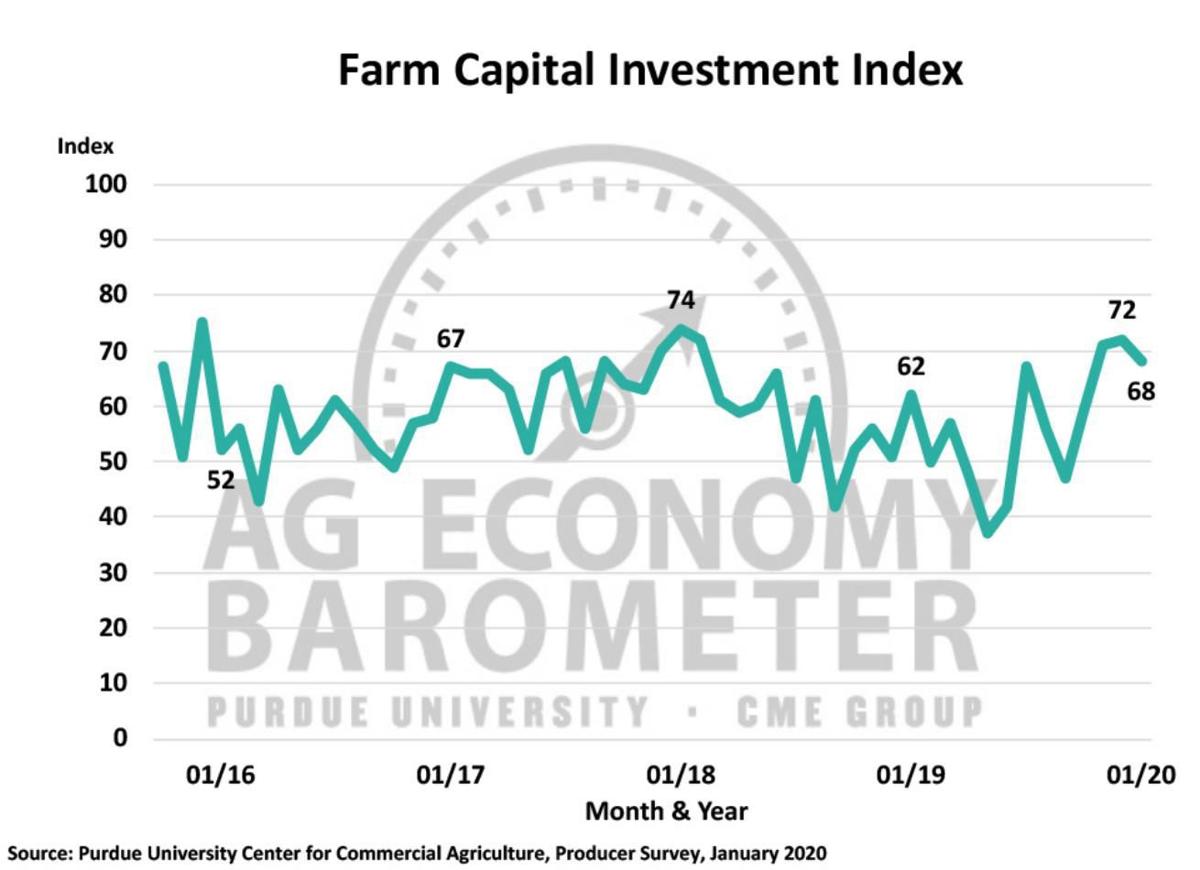 Each winter we ask producers about future plans for their farming operations. Specifically we ask what a reasonable growth rate is for their farming operations during the coming five years. During the five years that we’ve included the question on the barometer survey, there has consistently been a small percentage of farms who plan to grow rapidly. And there is a relatively large group who either has no plans to grow, or actually plans to exit or retire from farming. That was true again this year.

In January 2020 that percentage increased again to 44 percent of respondents. Combined, farms that either have no plans to grow – or plan to exit or retire – totaled 56 percent of farms in the January 2020 survey. That compares to 50 percent this past year and just 39 percent two years ago.

Correspondingly fewer farms in this year’s survey indicated they expect to grow rapidly compared to prior years. The increase in the number of farms who don’t plan to grow could be a response to a perceived increase in risk on the part of farm operators. 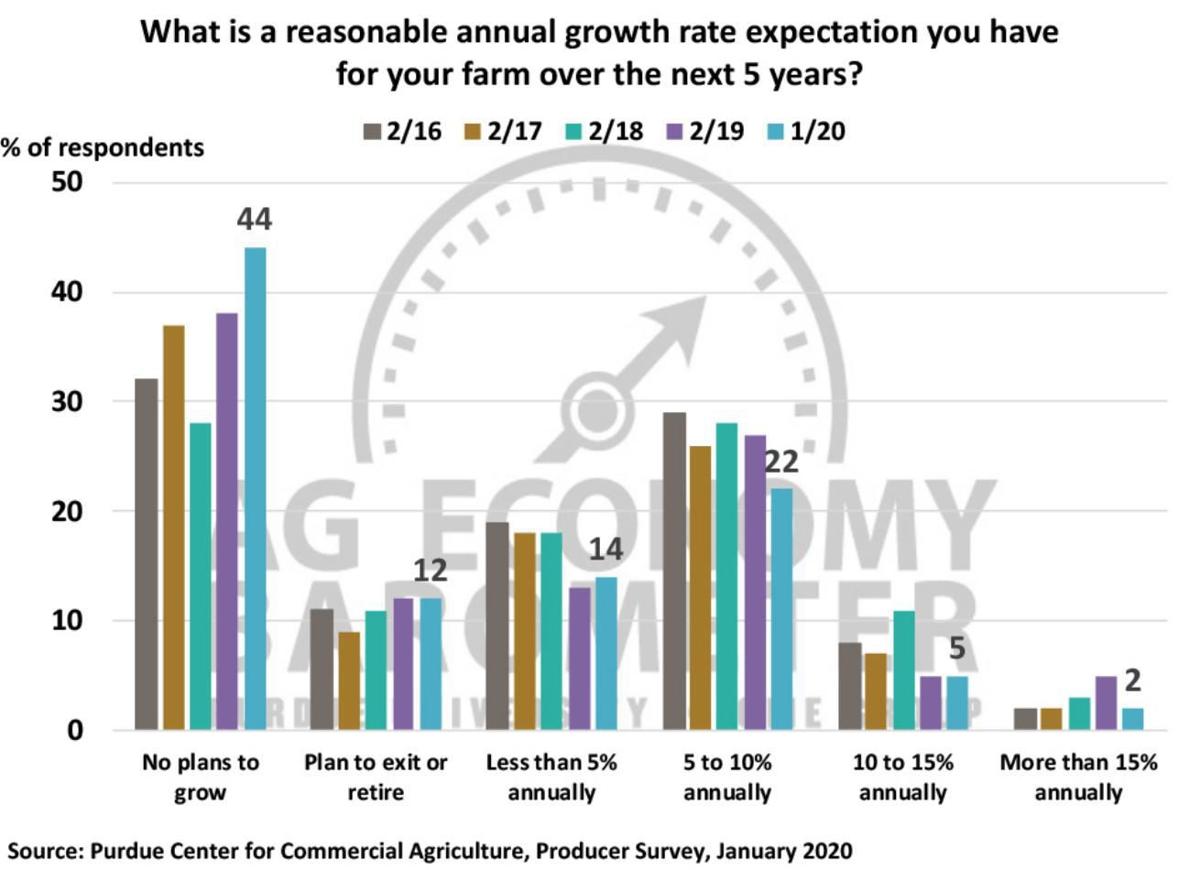 Farmers are faced with a March 15 deadline to register for the U.S. Department of Agriculture’s Agriculture Risk Coverage program or the Price Loss Coverage program under the 2018 farm bill. This year’s registration is for the 2019 and 2020 crop years. Farmers can choose different programs for corn or soybeans.

The USDA’s Farm Service Agency indicates the vast majority of farmers have not enrolled their farms yet. To learn more about farmer perspective on which program might be more attractive, we asked farmers which program they planned to enroll in for corn for the 2019 and 2020 crop years. The majority at 57 percent of farms in our survey are still uncertain about which program they will choose. 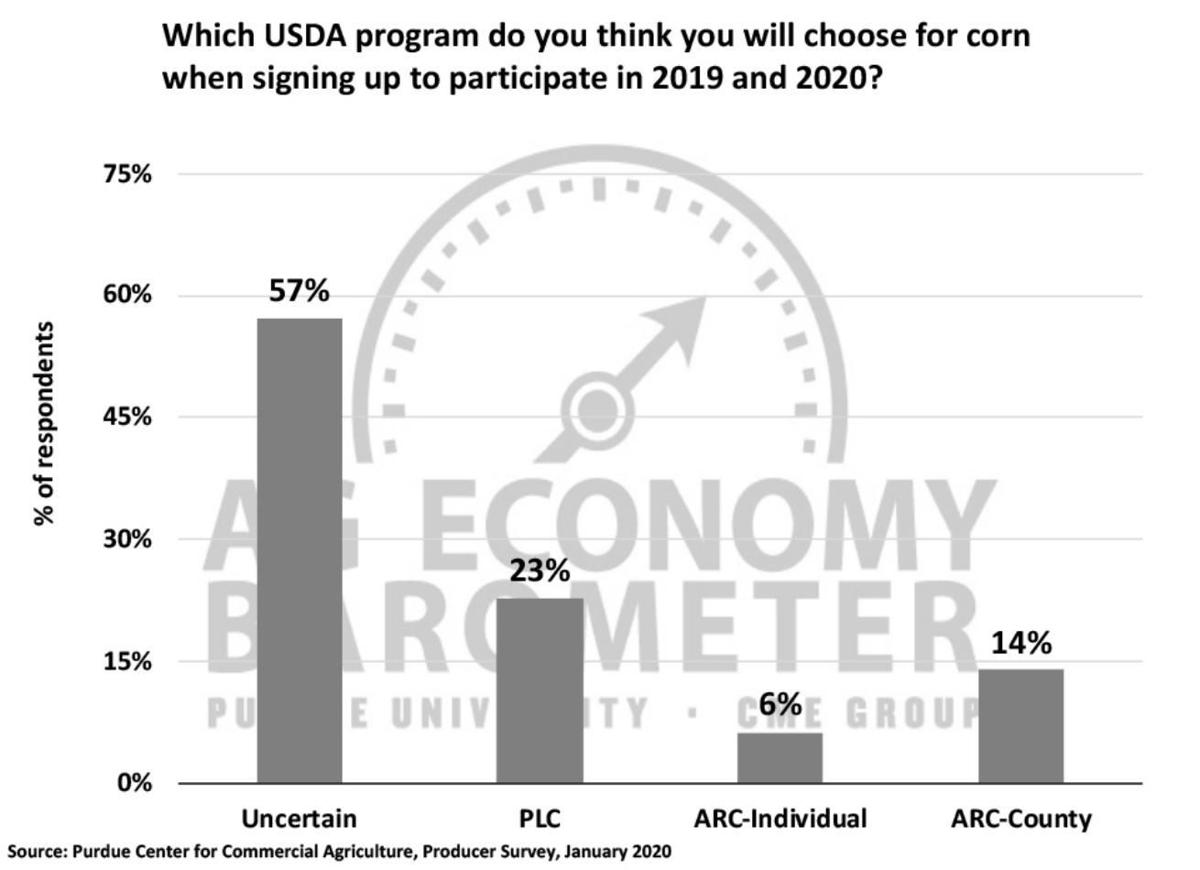 Producer sentiment improved markedly in January as the Ag Economy Barometer increased 17 points from its December reading. The improvement in farmer sentiment was attributable to an increase in optimism regarding future conditions in agriculture. The Index of Future Expectations increased 24 points from December to January. The Index of Current Conditions was virtually unchanged compared to a month earlier.

This month’s survey was conducted the week that Trump signed the Phase One agreement with China. The increase in optimism about future conditions appeared to be motivated by expectations for improved trade with China. In January almost 70 percent of farmers said they expect the soybean-trade dispute with China to be settled soon. That’s an increase from 54 percent who felt that way in December. And 80 percent of farmers think the trade dispute will ultimately be resolved in a way that benefits U.S. agriculture.

Producer increase in optimism about the future was not enough to increase the Farm Capital Investment Index. The investment index decreased 4 points in January from December’s reading. But it remained strong compared to late summer and early fall. The percentage of farm operations who have no expectations for growth in the next five years has been increasing the past couple of years. Fewer farms expect to grow rapidly during the same time frame.