The Ag Economy Barometer increased slightly compared to a month earlier, with a reading of 168 in February. That’s just one point more than in January. The one-point increase in the sentiment index was enough to push the barometer to a new all-time best, eclipsing the previous record set in January of this year.

The barometer’s strength was underpinned by an improvement in producer perceptions of current conditions, which offset a small decline in expectations for the future. The Current Conditions Index set a new record in February with a reading of 154, an increase of 12 points from January. Expectations for the future remained strong from a historical perspective, although the Index of Future Expectations reading of 175 represented a four-point decline from its record set in January. The Ag Economy Barometer is generated each month from 400 U.S. agricultural-producer survey responses. This month’s survey was conducted Feb. 10-14, 2020. 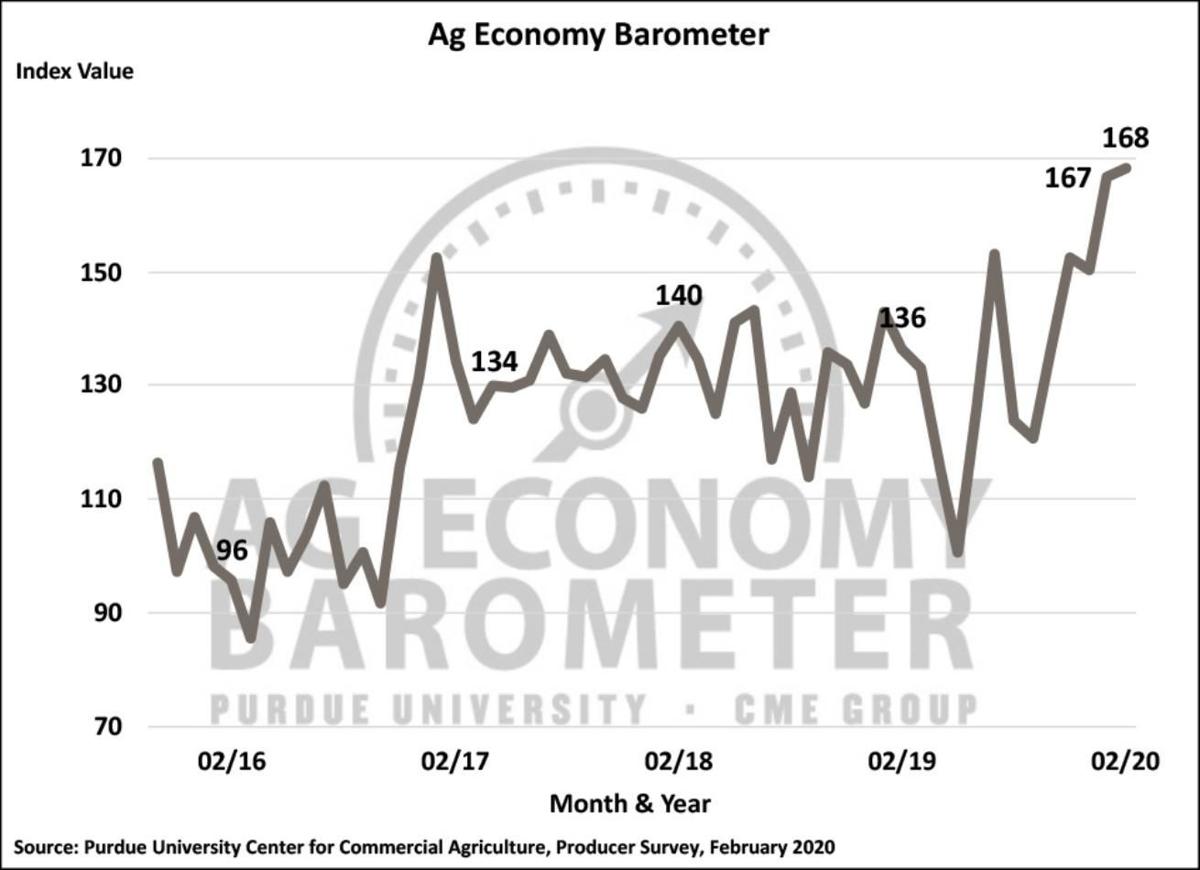 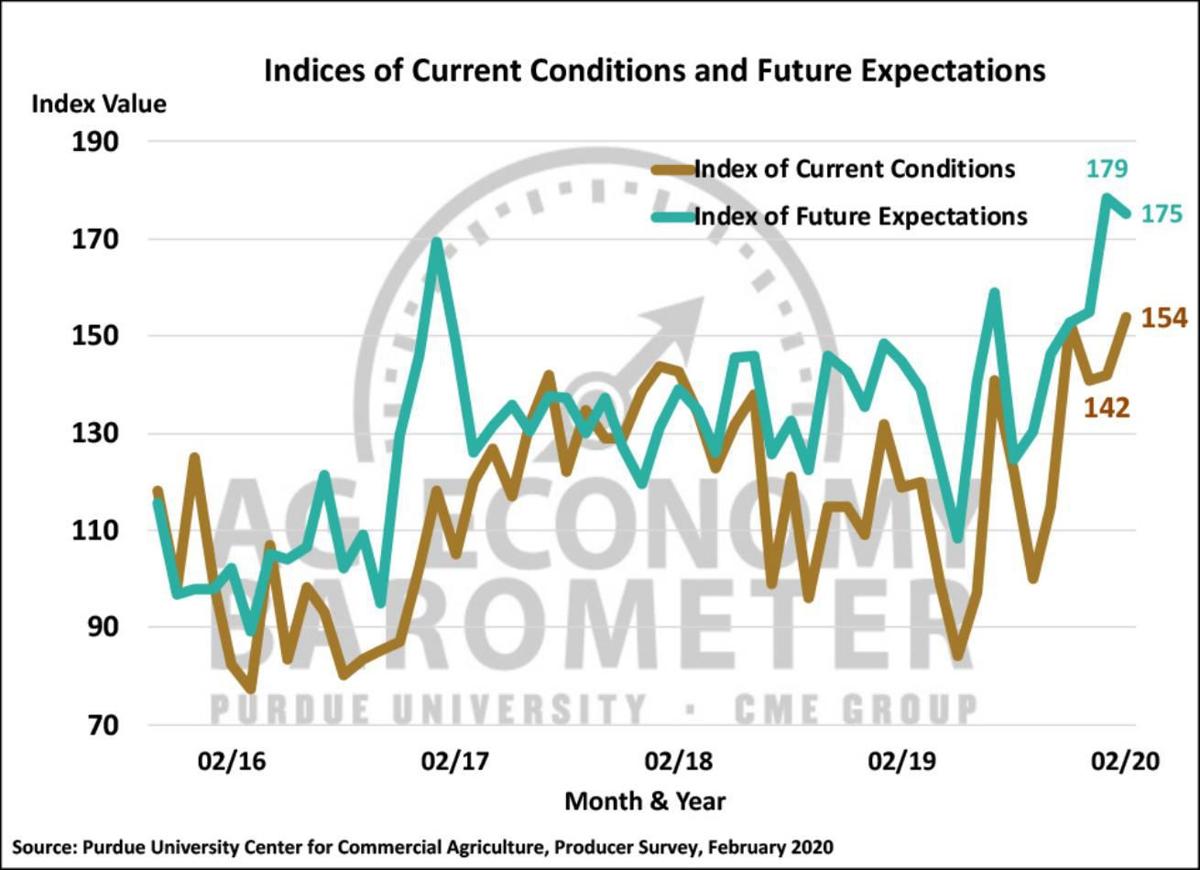 The increase in the Index of Current Conditions, to a new record in February, followed a sharp increase in future expectations in January. Concurrent with the improvement in perceptions about current conditions, producers retained nearly all the optimism about the future that they recorded in January. Producer expectation of an improving agricultural-export environment appears to be a major reason for the ongoing strength in both indices.

There were some concerns existed about the possible impact of the COVID-19 virus on ag trade in mid-February when this month’s survey was conducted. But producers remained relatively optimistic about the resumption of trade with China. The percentage of producers expecting the soybean trade dispute to be settled soon, which peaked at 69 percent in January, declined to 61 percent in February. Yet this month’s decline needs to be kept in perspective.

The February reading was the second-most positive response recorded regarding the resumption of trade with China since we first posed the question in March 2019. Producers also remained optimistic that the trade dispute will be resolved in a way that’s favorable to U.S. agriculture. There was 80 percent expecting an outcome that is ultimately positive for U.S. agriculture. Although producers have consistently had a long-run positive outlook regarding the trade dispute, the average positive response to that question through the end of this past year was in the low-70s. February was the second month in a row that 80 percent or more of respondents said yes when asked if the trade dispute will ultimately be resolved in a way that’s beneficial.

Note that this month’s survey was completed prior to President Donald Trump’s tweet Feb. 21 indicating that if “farmers need additional aid until such time as the trade deals with China, Mexico, Canada and others fully kick in, that aid will be provided by the federal government.” That seems likely to impact producer expectations regarding future Market Facilitation Program payments.

In this month’s survey we asked producers to what extent the recent signing of the United States-Mexico-Canada Agreement and the China “Phase One” agreement relieved their concerns about the impact of tariffs on farm income. More than three-fourths at 76 percent of respondents said the agreements either “somewhat” at 69 percent or “completely” at 7 percent relieved their concerns while 17 percent of respondents chose “not at all” as a response. Looking ahead it remains to be seen how the ongoing spread of the COVID-19 virus and its impact on markets around the world will impact producer optimism about trade and future economic conditions in agriculture. 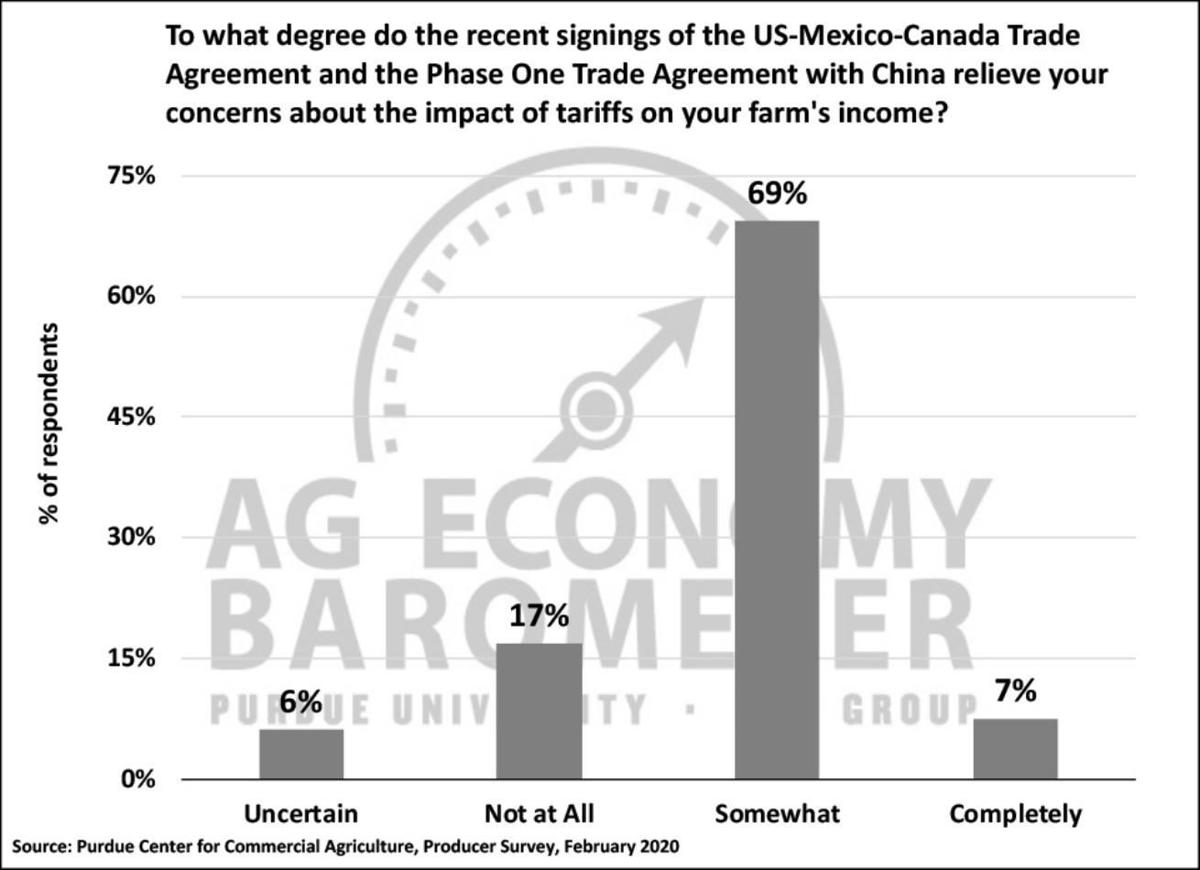 There was a modest improvement in the Farm Capital Investment Index this month. The index increased from a reading of 68 in January to 72 in February. Producers have had a relatively positive outlook with respect to making large investments in their farming operations going back to this past fall; the index has ranged from 68 to 72 since November. Investment index readings during the past four months have been noticeably stronger than in late summer and early fall, when the index ranged from 47 to 59. 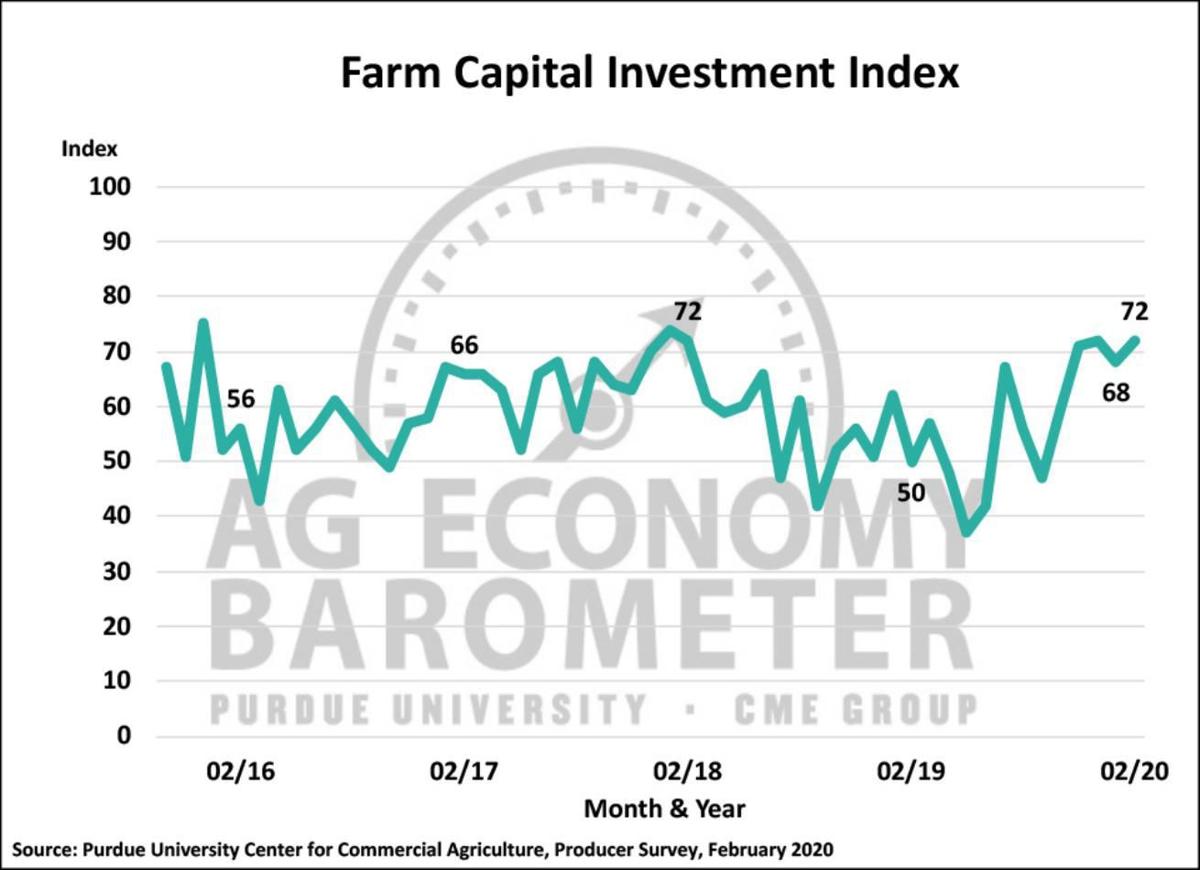 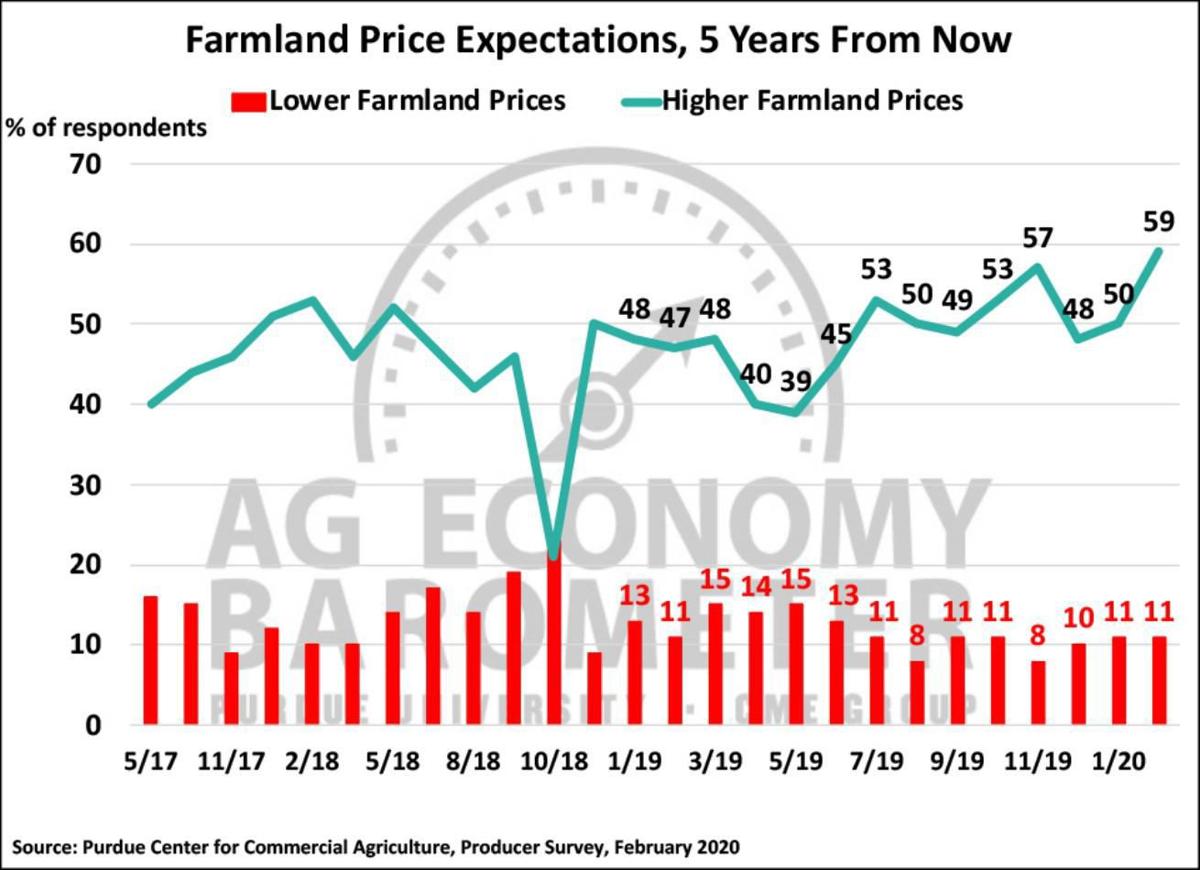 There is still a lot of uncertainty regarding which program producers will choose when they make their program choice under the 2018 farm bill, which needs to be made by March 16. This month’s survey focused on producers who grew soybeans in 2019. Among soybean farmers, nearly four out of 10 at 37 percent said they were still uncertain regarding which program they would choose. Nearly 40 percent of respondents said they planned to choose the Agricultural Risk Coverage-County program, which was the most popular program under the 2014 farm bill. There appeared to more interest in the Price Loss Coverage program than under the 2014 farm bill. In our survey 19 percent of soybean producers planned to choose it. There was also more interest in the Agricultural Risk Coverage-Individual Coverage program than under the previous farm bill; 7 percent of respondents indicated that would be their program choice. 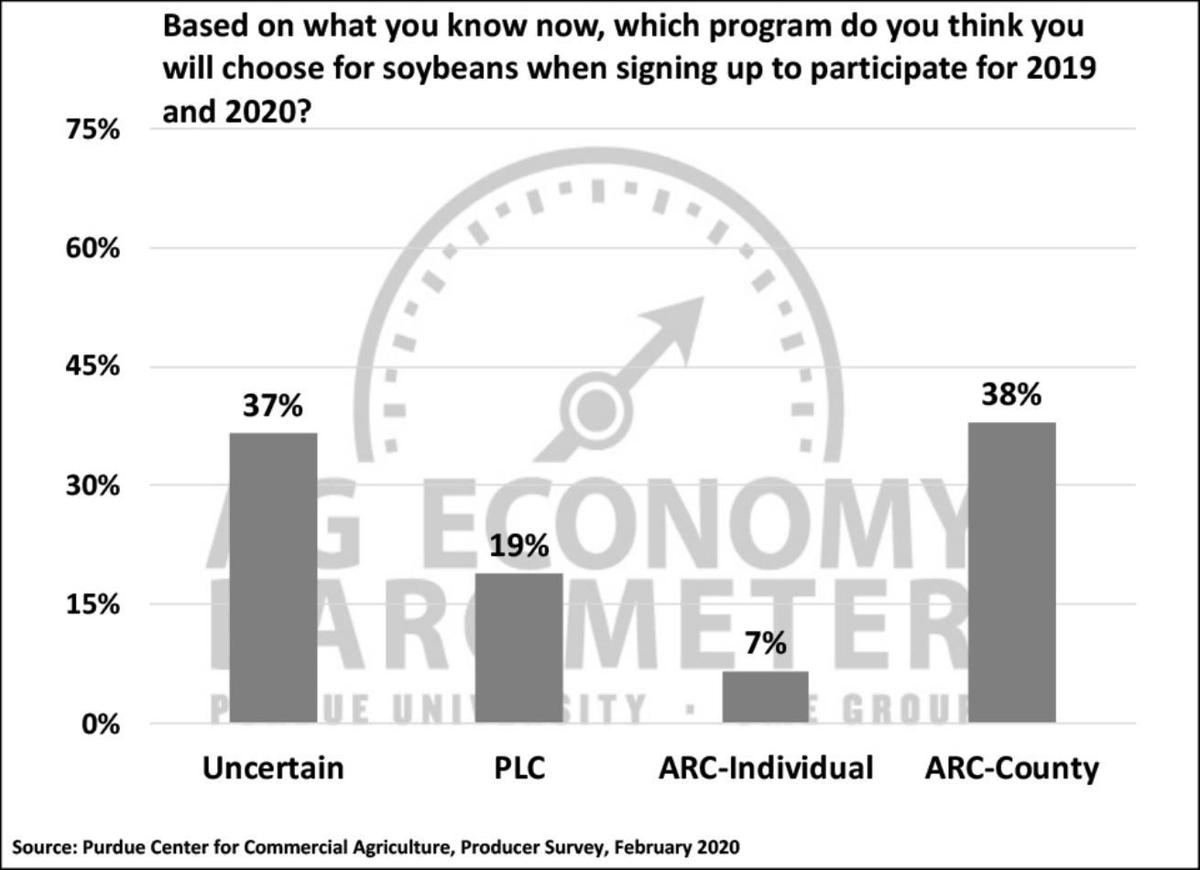 Ag-producer sentiment remained strong in February. The Ag Economy Barometer not only retained the large increase that took place in January, but actually increased slightly. Producers were more optimistic about current conditions on their farms and in U.S. agriculture. They retained most of the improvement in expectations for the future that they exhibited in January. Optimism about the agricultural-trade outlook appeared to be the primary driver behind the improvement in sentiment. Producers in February were more inclined to say that now is a good time to make large investments in their farming operation. They also thought it more likely that farmland values would increase during the next five years, than a month earlier. As the deadline for the 2018 farm bill registration approaches, there remains a good deal of uncertainty about program choice. Almost 40 percent of producers are still undecided. Although the COVID-19 virus was a topic of some concern when the February survey was conducted, it remains to be seen what impact the disease’s increasing footprint around the world will have on farmer sentiment.