This week’s post reviews historic soybean-yield data and considerations for 2021. The U.S. Department of Agriculture’s May World Agricultural Supply and Demand Estimates report estimated initial soybean yield for 2021 at 50.8 bushels per acre an increase from 50.2 in 2020 but not quite to the record levels set in 2016. 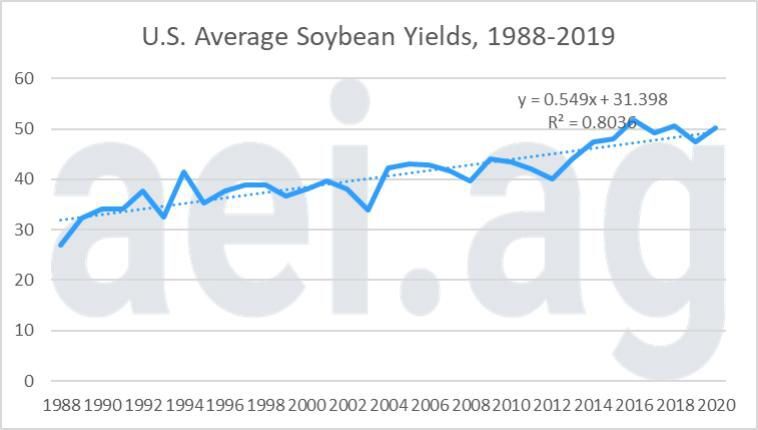 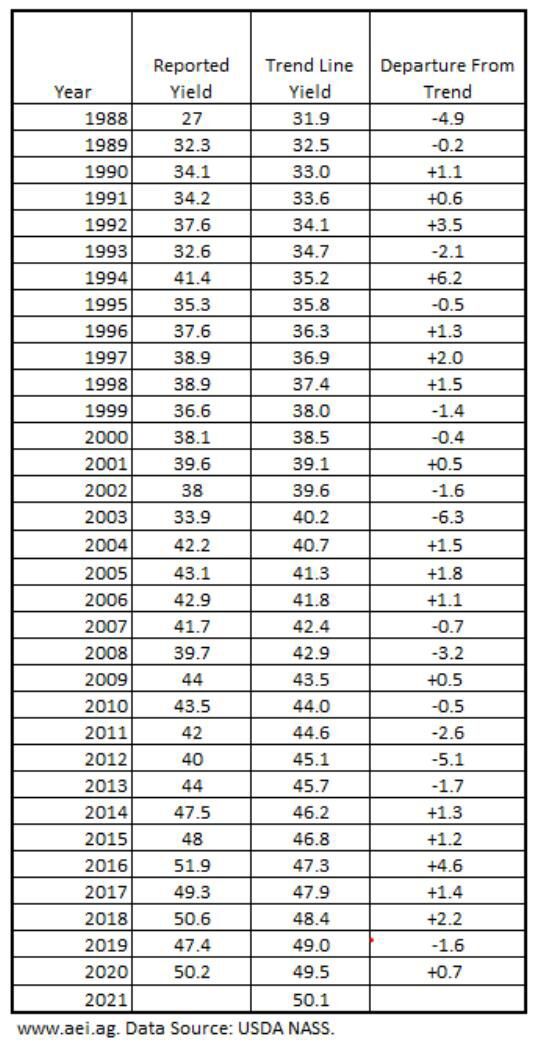 U.S. soybeans yields in 2020 were 50.2 bushels per acre or 0.7 bushels more than trend. The greatest reported yield was 51.9 bushels per acre in 2016. Overall soybeans have recorded consistently strong yields in recent years, with only one year of less-than-trend in the past seven.

For 2021 these data and methods suggest the historical range of soybean yields in 2021 terms is 43.8 bushels per acre to 56.2 bushels per acre. It’s also worth noting 2012 was not the worst year for soybeans, at least by this measure. That’s important because we often hear comparison to “2012-like events,” which would have different implications across corn and soybeans.

Let’s consider the World Agricultural Supply and Demand Estimates report and various yield estimates, which are reported to the tenth of a bushel. For both crops the smallest change at 0.1 bushels is equal to 0.2 percent of trend soybean yields in 2021 and 0.06 percent of corn. The goal here is to point out how hypersensitive some of those small changes are within the crops. Broadly speaking a 0.25-bushel change in soybeans is about the same as a 1-bushel change in corn.

The May 2021 World Agricultural Supply and Demand Estimates report includes a yield estimate that’s among the most two or three observed in history. But that isn’t an ambitious forecast; it’s largely the influence of the upward-sloping yield curve.

Diving into the data a bit, we can account for that upward slope through time and – similar to adjusting for inflation – create some helpful benchmarks. First the trend-adjusted average yield for 2021 is 50.1 bushels. Second the range of possible outcomes is likely plus or minus 6 bushels. Finally we know more-than-trend yield occurs a majority of the time or about 55 percent of the time.

Of course questions – especially when it comes to the weather – remain about how the 2021 growing season will play out. But historic data can provide a helpful baseline to frame expectations. 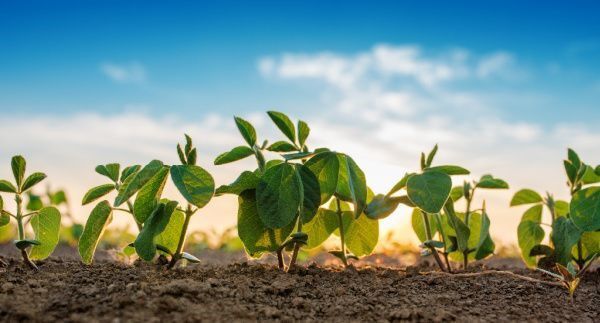 The greatest reported soybean yield is 51.9 bushels per acre in 2016.