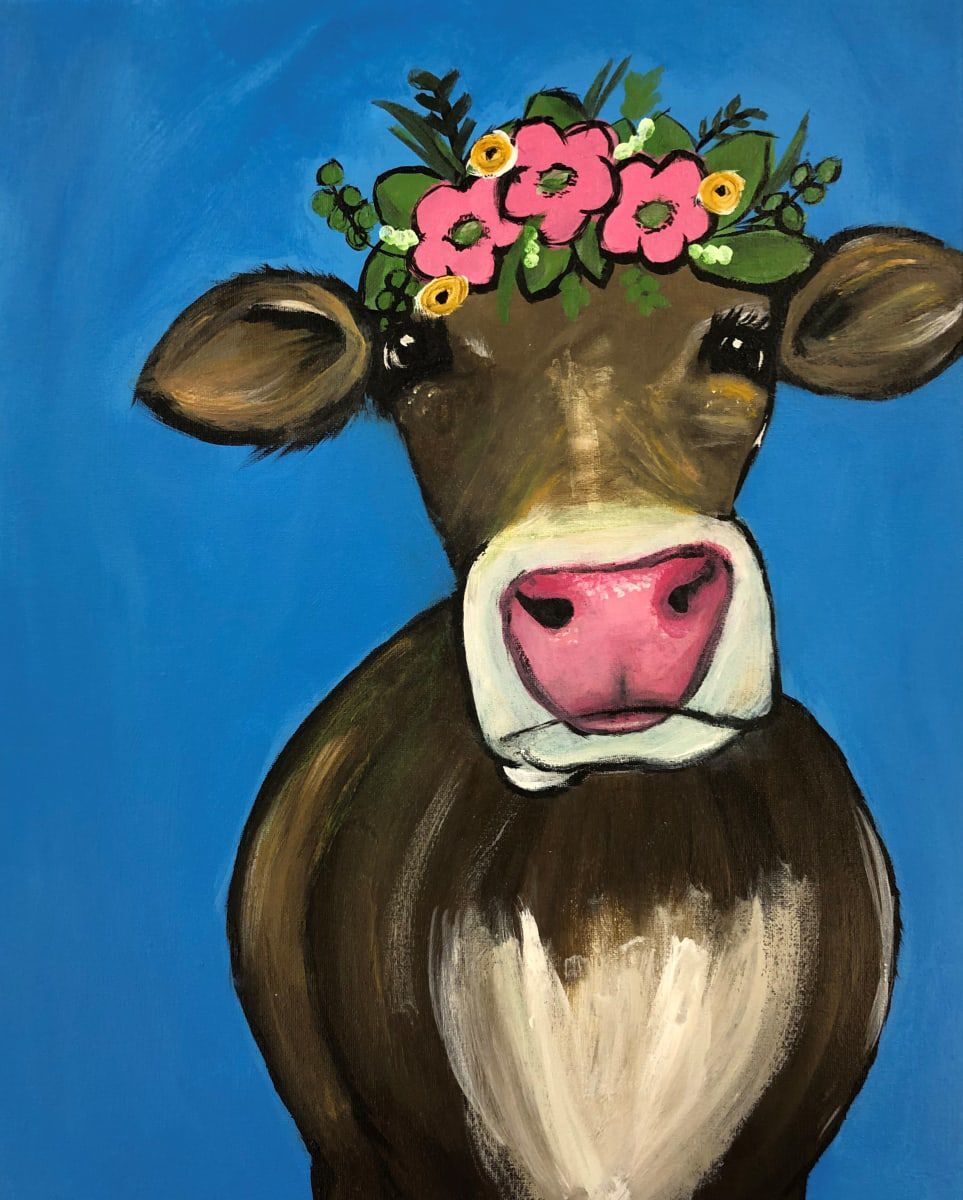 Abundant raw milk is translating into record-setting production of dairy products. In the U.S. Department of Agriculture’s “Dairy Products” report released April 1, production of butter, cheese and nonfat-dry milk in February was the most ever seen for that month.

Spring has sprung across the United States. As the days lengthen and the temperatures warm, milk production is also growing seasonally. In the Western region of the country market participants indicate peak production levels are on the horizon, perhaps just weeks away. Meanwhile in the upper Midwest seasonally robust volumes are a bit further off, but market participants continue to report very strong figures relative to the prior year. Bottling demand has increased as students return from spring break but milk remains readily available for manufacturing needs.

Abundant raw milk has translated into record-setting production of dairy products. In the U.S. Department of Agriculture’s “Dairy Products” report released April 1, production of butter, cheese and nonfat-dry milk in February was the most ever seen for that month – at least on an average daily basis. With milk production expected to stay strong, dairy-product production will continue to be robust. That aggressive production threatens to overhang the market unless demand can demonstrate a meaningful and sustained expansion.

Yet despite supply concerns, the Chicago Mercantile Exchange spot dairy markets all saw gains during the course of the past week. Butter had the biggest weekly increase, adding 7 cents during the short week with 19 loads trading hands. After closing the April 1 spot session at $1.845 per pound, spot butter prices are now the best they’ve been since June 2020. Butter demand has improved; spring holiday baking supported retail purchases while the reopening of restaurants increased the pull from food service. New-crop butter rules are also likely helping to support some of the spot price increase because there’s no denying that product is readily available. February butter production set a new record for the month. At 185.6 million pounds, butter production increased 2.2 percent year-over-year after accounting for the leap day. 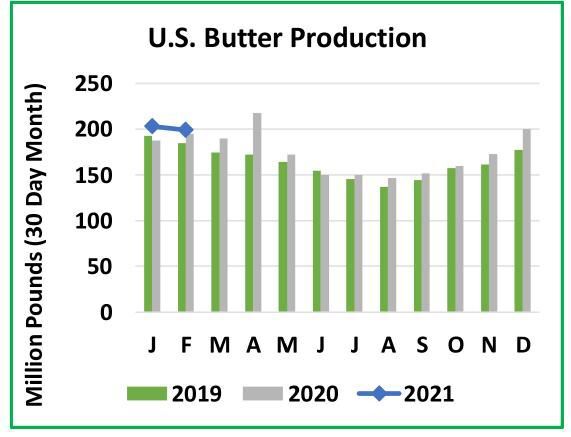 Cheese markets also had a boost this past week. Market participants indicate that food-service demand for cheese has improved markedly, which is helping to keep some tension in the market. Nevertheless cheesemakers have been busy, manufacturing a total of 1.043 billion pounds of cheese in February. Representing an increase of 4.7 percent versus February 2020, cheese production set a record for the month. Production data shows manufacturers favored the production of American-style cheese during February, though Cheddar output in particular has slipped compared to earlier months. Meanwhile the production of Italian-style cheese also increased versus the prior year, albeit by a slower margin than American-style cheese. Improving restaurant activity should disproportionately benefit Italian-cheese demand in the coming months. 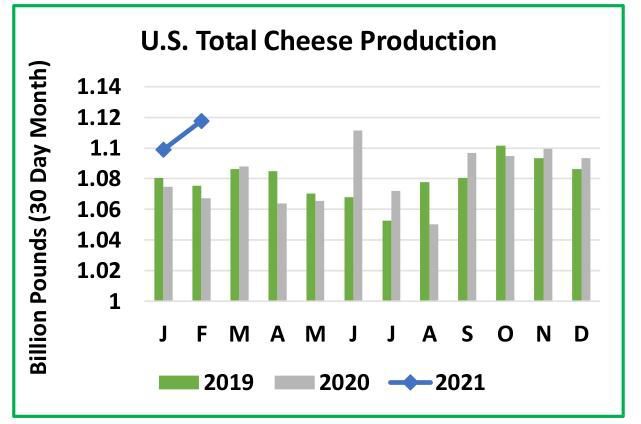 Cheddar blocks were able to capitalize on the increase in demand, though the spot market was fickle. Price increases March 29 and April 1 counteracted a penny decrease March 31, ultimately increasing the spot price by 5.5 cents to $1.775 per pound. Barrels were more consistent, with prices increasing in three out of the four daily spot sessions, finishing the week at $1.5125 per pound – an increase of a nickel from the previous week.

February production data illustrates that during the month dryers held a strong bias for producing nonfat-dry milk for use in the domestic market or to be shipped to nearby Mexico, versus skim-milk powder – which would likely be sent farther afield. Totaling 186.3 million pounds for the month, nonfat-dry-milk production increased by 13 percent year-over-year. 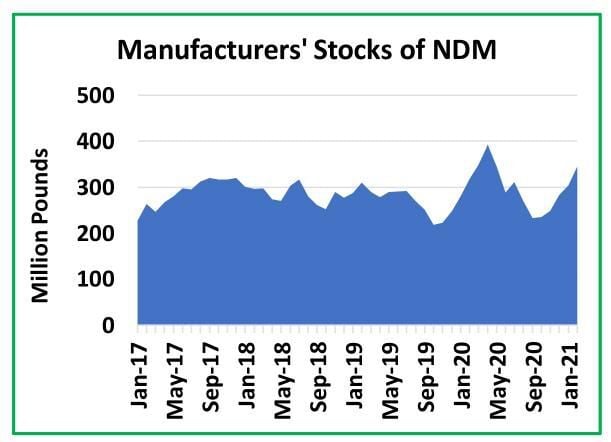 Meanwhile skim-milk-powder production decreased by 20.3 percent to 29.6 million pounds. That preference is likely a reflection of the nagging logistical issues that are preventing U.S.-produced skim-milk powder from being easily exported. Strong nonfat-dry-milk production also translated to a buildup in stocks as manufacturer stocks of nonfat-dry milk grew to 345.6 million pounds at the end of February – the most amount ever recorded at the end of that month. In the spot nonfat-dry-milk market, the price increased by a half-cent in each of the four trading days of the week, bringing the price April 1 to $1.19, an increase of 2 cents from the previous Friday’s close.

The whey markets continue to increase, with the spot dry-whey price boasting a new record this past week. After opening the week unchanged and adding just a quarter-cent March 30, the price increased by 3 cents March 31 as three loads traded hands. The market remained unchanged at 66 cents per pound April 1. Dry-whey production increased by 4.3 percent year-over-year in February as strong cheese production threw off a plentiful whey stream. 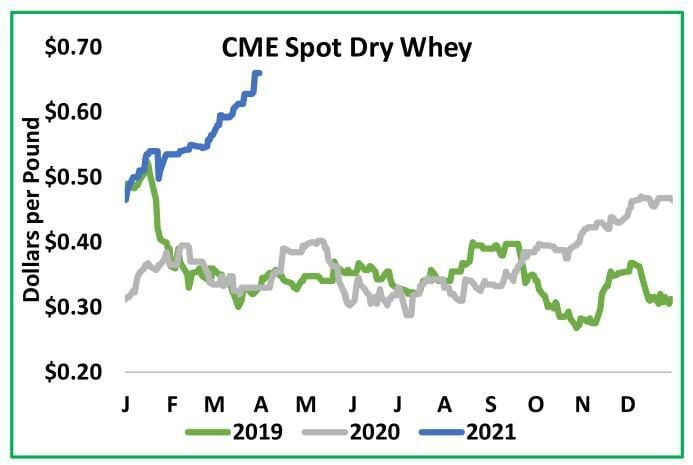 Yet dry-whey production paled in comparison to the manufacture of greater-protein products. Production of whey-protein concentrates and whey-protein isolates increased by 8.8 percent and 28.3 percent, respectively. That preference for greater-protein products continues to keep tension on the dry-whey market, contributing to the spot price increase.

Activity in the spot dairy sessions combined with noise in the grain markets had a significant influence on milk futures during the course of the past week. After posting some mixed performance March 29 and 30, the “Prospective Plantings” report March 31 suggested impending feed-price increases. That contributed to significant gains in the Class III futures market. Several nearby contracts traded as high as limit up before settling off those highs. Some further gains during the April 1 session increased prices more. The MAY21 Class III contract settled April 1 a full 95 cents more than March 29. Most nearby Class IV milk futures contracts also saw gains during the course of the week, bolstered by increases in the spot butter market. 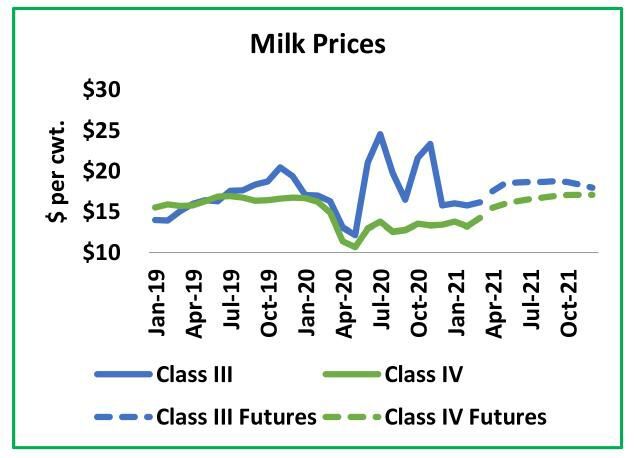 A surprising Prospective Plantings report released March 31 sent corn and soybean prices skyward. Despite already healthy prices, which were expected to inspire additional plantings, the initial survey data included in the report underwhelmed. Corn plantings for the upcoming market year are estimated at 91.1 million acres. Though an increase from 2020, the figure is a couple-million acres shy of most trade estimates. Soybean-planting expectations also underwhelmed at 87.6 million acres. The less-than-expected planted acreage combined with meager carryover stocks sent grain futures limit up March 31 and are expected to result in increased feed costs for dairy producers.

The U.S. Department of Agriculture’s annual Prospective Plantings report, released March 31, is the first look at the 2021 planting intentions…

The Ag Economy Barometer increased in March to 177, the best reading for the barometer since the record reading of 184 in October. This month’…

Lakers are at Port Duluth Superior port taking on iron ore. Salties are working their way up the St. Lawrence River.

The U.S. dairy herd continues to expand, increasing milk production. According to the U.S. Department of Agriculture’s Milk Production report …

Abundant raw milk is translating into record-setting production of dairy products. In the U.S. Department of Agriculture’s “Dairy Products” report released April 1, production of butter, cheese and nonfat-dry milk in February was the most ever seen for that month.