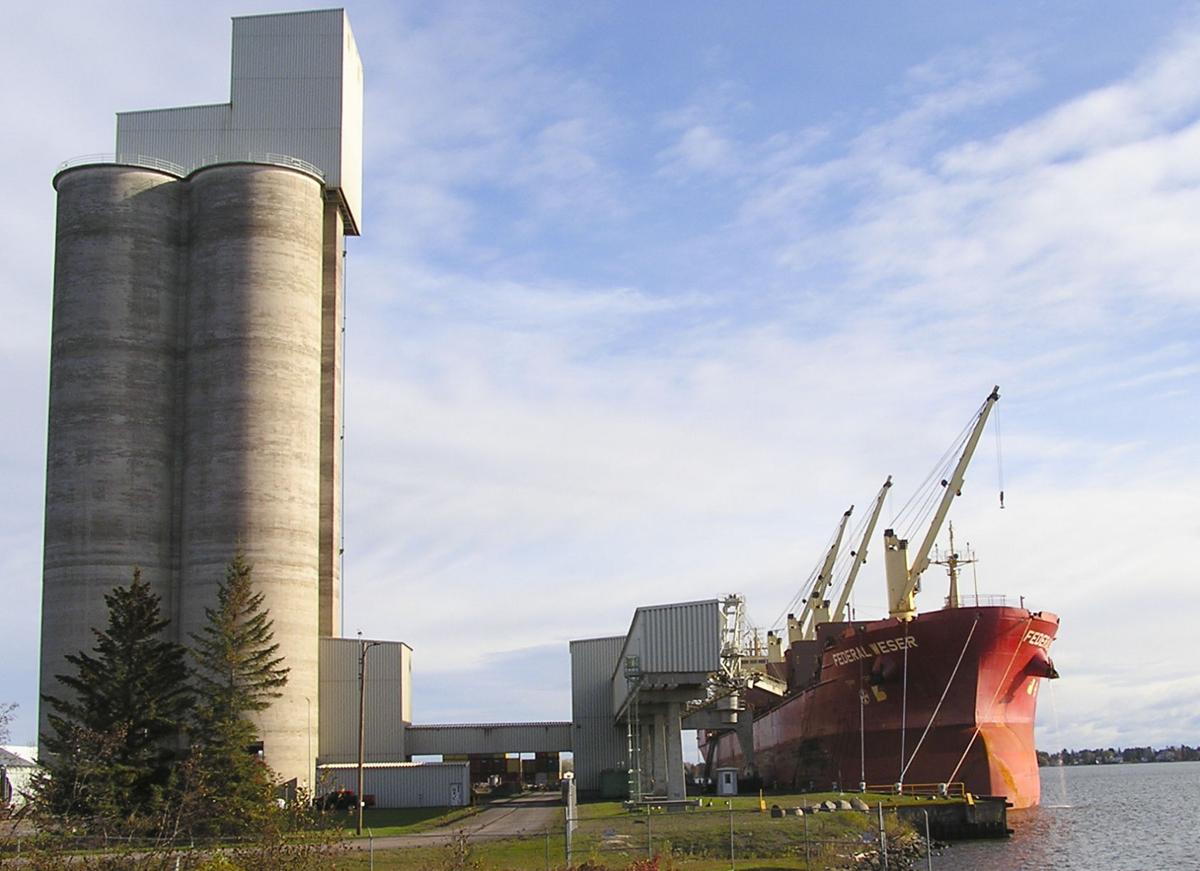 The Federal Weser pumps water from its hold while docked at the CRH US dock in Duluth, Minnesota. The 656-foot ship made a late-season visit, passing through the St. Lawrence Seaway from the Atlantic Ocean. The seaway closes at the end of December each year.

U.S. dairy exports rebounded sharply in November, climbing 19 percent in volume – milk-solids equivalent – and an astonishing 32 percent in value compared to the same month in 2020.

• Nonfat-dry-milk and skim-milk-powder exports grew 25 percent for plus 15,119 metric tons.

For the past three years we’ve seen strong October nonfat-dry-milk and skim-milk-powder shipments followed by weaker Novembers. This year that pattern reversed.

After shipping 66,862 metric tons.in October – only the second month in 2021 that U.S. volume failed to be more than 70,000 metric tons – U.S. nonfat-dry-milk and skim-milk-powder exports boomeranged to 76,422 metric tons.in November – easily a record for the month. 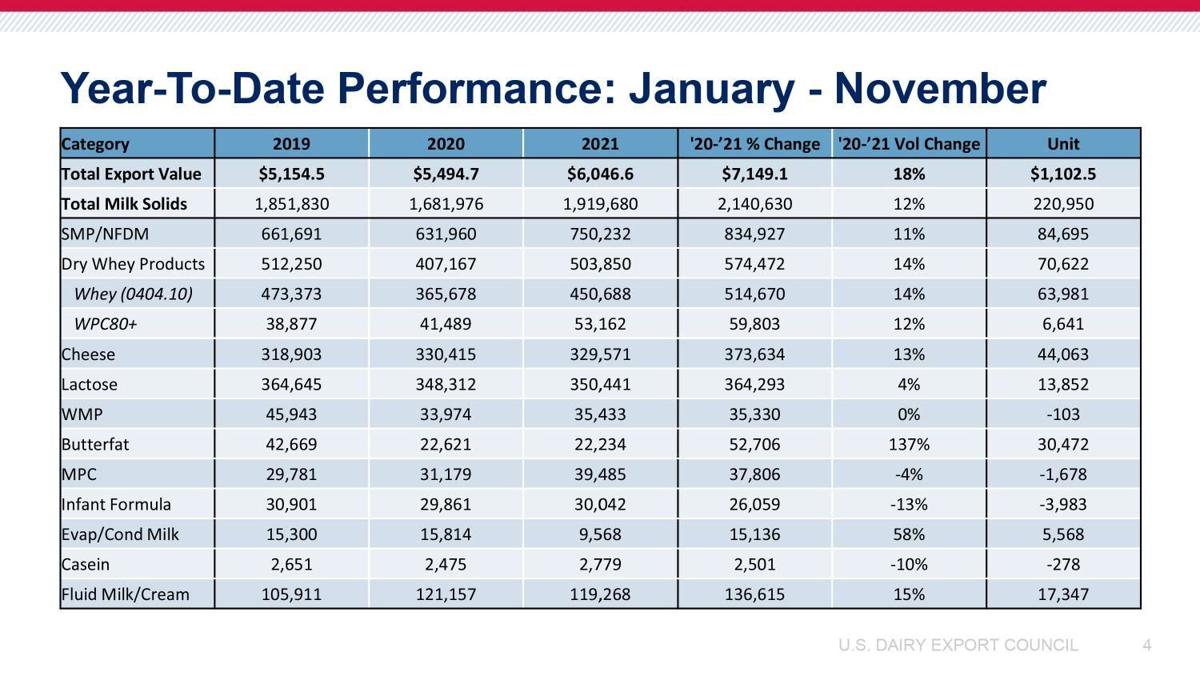 An exponential increase in exports to Honduras – 1 metric ton in 2020 vs. 1,372 metric tons in 2021 – drove the Central America total. And a 45 percent increase for plus 2,417 metric tons to Colombia – presumably in anticipation of January’s quota opening – lifted South American volumes.

Global nonfat-dry-milk and skim-milk-powder demand remains strong. In the months ahead readers should watch whether the U.S. price advantage with the European Union and New Zealand, which has narrowed significantly since September, will affect U.S. performance as we move further into the New Year.

U.S. cheese exports have surged in the second half of 2021, placing U.S. cheese exports on pace to finally surpass the annual export record set in 2014. Strong demand from U.S. major partners and weak production from primary competitors have been crucial to accelerated sales. In November volumes to Mexico particularly shone with an increase of 65 percent for plus 3,539 metric tons. 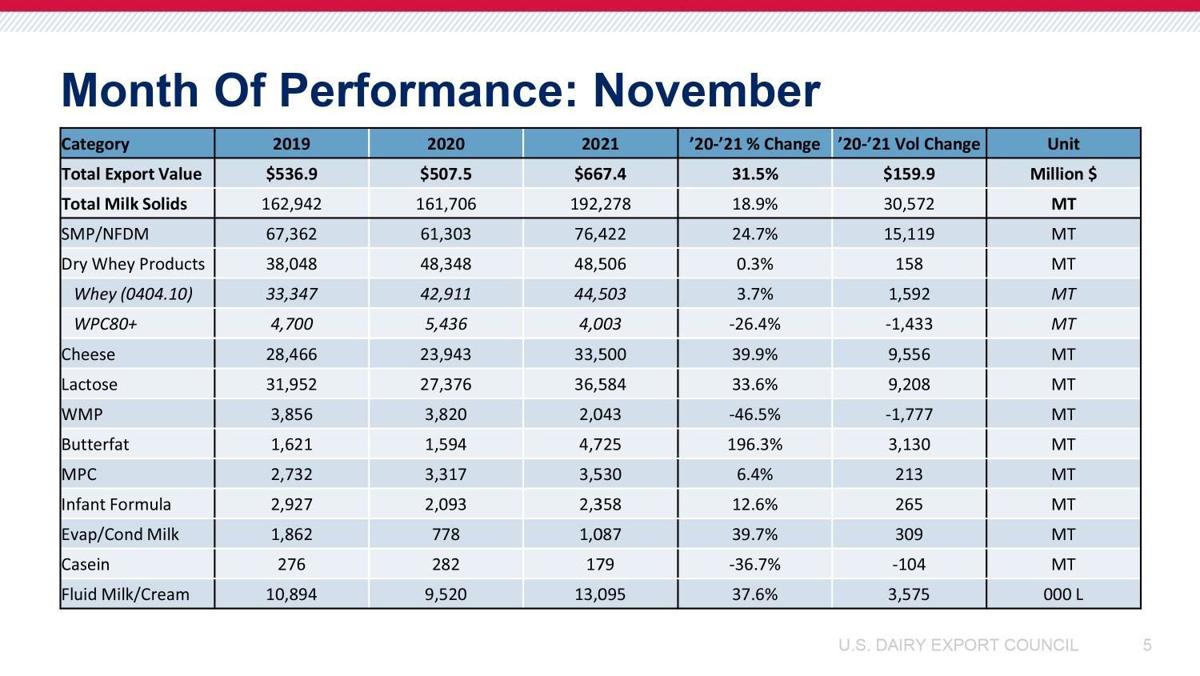 The United States has seen growth in multiple cheese types as economies rebounded in 2021; tourism returned and consumers went back to restaurants regularly. But digging into the data more, we see that cheddar exports, in particular, are having a resurgence. During the past several years, cheddar production has primarily been geared toward the domestic market, with exports increasing by less than 3 percent per year since 2015.

But with expanded capacity in the United States and competitive pricing, the amount of cheddar cheese moving overseas has reached its greatest point since 2015. Year-to-date cheddar exports have increased by 30 percent, with an increase of more than 10,000 metric tons. In just the past three months volumes increased more than 7,000 metric tons year-over-year. Although from a much smaller base, cheddar-cheese exports are growing at the fastest pace of any of the major cheese-export categories. 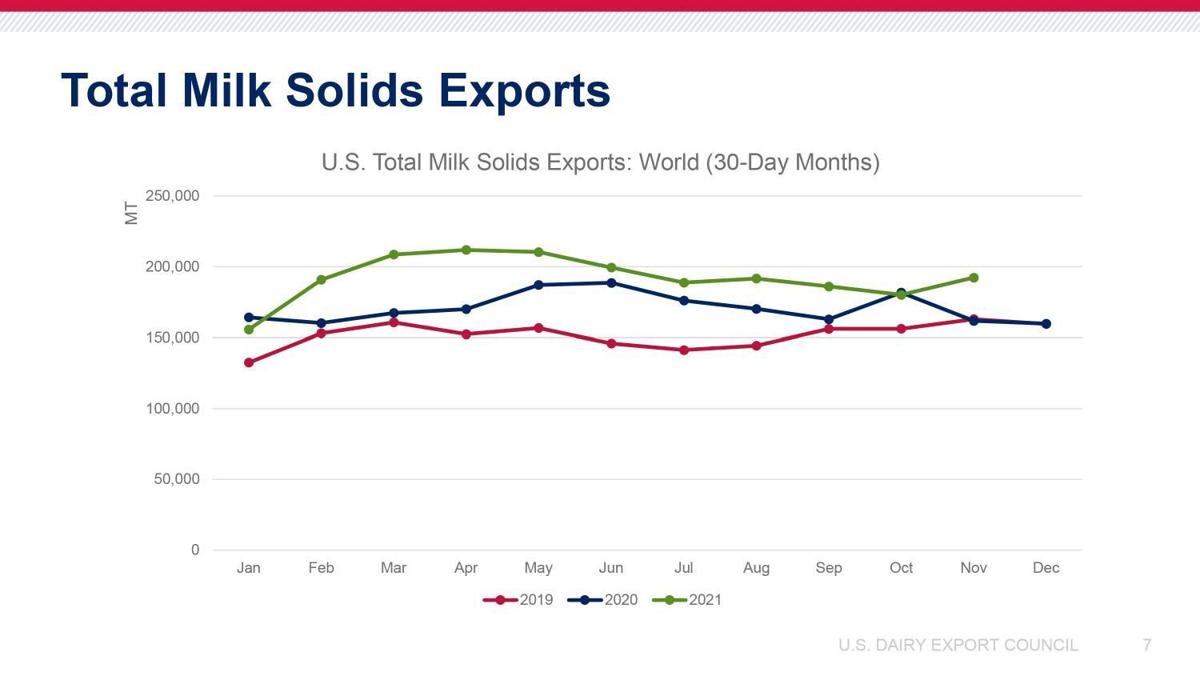 Overall most of that growth is attributable to Japan’s increased purchasing of cheddar for further processing. In what is arguably the most competitive cheese-import market in the world, U.S. competitors failed to have sufficient product for Japanese buyers. U.S. prices were much more in line with global benchmarks, both of which have enabled the United States to gain market share.

Total whey exports in November were essentially flat compared to November 2020; they grew 0.3 percent at plus 158 metric tons.

Increased exports to Southeast Asia and other smaller partners helped offset the strong decline in shipments to China.

• Total exports declined 18 percent at minus 3,233 metric tons in November.

Two factors are likely playing into the reduced exports.

1. Export prices of U.S. whey-protein concentrates are the greatest they’ve been in about eight years. November export prices reached $4,576 per metric ton, almost 60 percent more than the average 2020 price of $2,901 per metric ton. The increased prices are pushing buyers to purchase only what they need in the short term.

2. There is likely less exportable supply available. U.S. production of whey-protein concentrates did grow in October as output reached its greatest monthly level since early 2018. Usually with increased production exports would be the primary destination for the increased volume. But strong domestic demand – an increase of 6 percent year to date – has kept the product at home and contributed to an overall decline in whey-protein-concentrates inventory of 2 percent year-over-year. The data tracks with the renewed focus on health and wellness as consumers returned to gyms and pursued healthier lifestyles; both are driving increased-value protein consumption.

So while exports of whey-protein concentrates may have decreased, it’s unlikely that reduced international demand is the culprit. Instead it’s due to increased prices and tighter exportable supply slowing export growth.

The Federal Weser pumps water from its hold while docked at the CRH US dock in Duluth, Minnesota. The 656-foot ship made a late-season visit, passing through the St. Lawrence Seaway from the Atlantic Ocean. The seaway closes at the end of December each year.