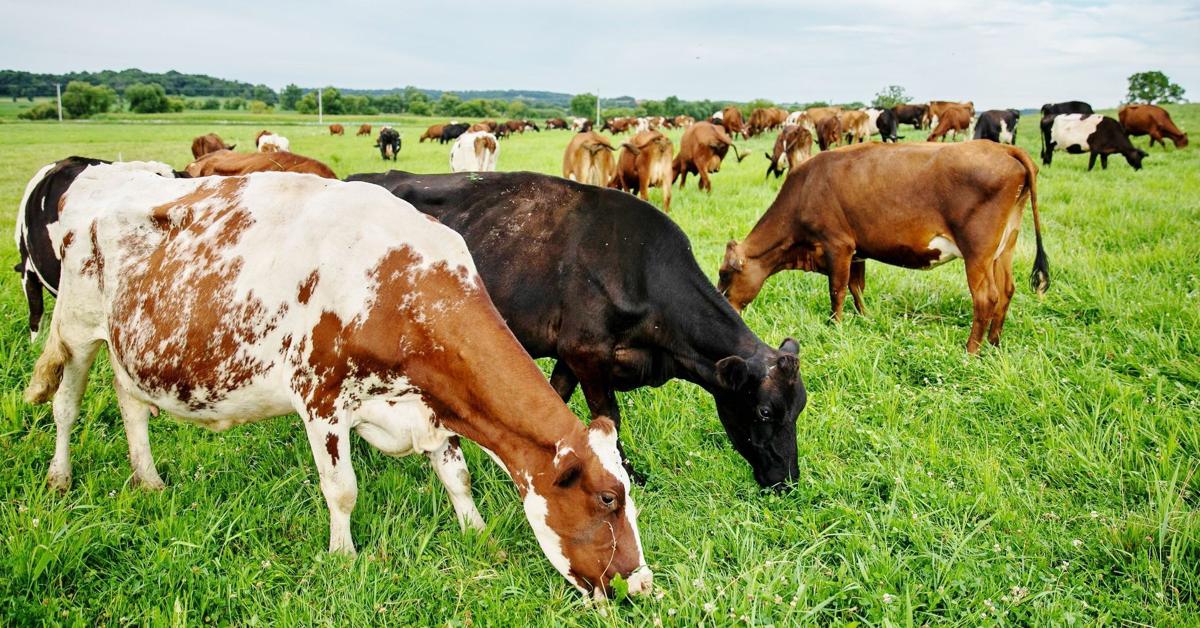 The year 2020 continued until its end to bring turbulent headwinds to dairy demand, which the industry has survived with heightened government support and robust export markets. Total domestic commercial use of dairy products posted a small gain during the August-October period, despite the pandemic’s renewed assault on food-service sales. Continued government purchases of dairy products through the Food Box, Section 32 and other programs added significantly to total sales during the period. That strengthened milk and dairy-product prices. Export growth remains striking, with year-to-date volumes showing a record portion of U.S. milk-solids production going abroad.

Forecasts for 2021 are less certain than usual, with divergence between futures markets and government projections based largely on differing demand assumptions related to the course of the pandemic.

The USDA’s ongoing monthly analyses of commercial use of milk and dairy products provide a good general picture of how domestic dairy consumption is evolving with the coronavirus pandemic. The emphasis needs to be on “general” in that context because the methodology for the calculations cannot distinguish between marketing channels – such as retail or food-service. They also consider most of the large volumes of dairy products the USDA has purchased for food-assistance donations in 2020 as commercial use.

Only a small amount of product is specifically identified as non-commercial “net removals” by the government, based on funding source. The USDA has identified only 6 million pounds of butter and about 13 million pounds of cheese as “net removals” during the first 10 months of 2020. By those inclusive calculations, domestic commercial use of butter increased by an annual rate of almost 13 percent during the first three full months of the pandemic, April through June. It decreased by about 1.5 percent during the following four months.

The corresponding numbers for total cheese were a 1.8 percent decrease during the first three months followed by a slight growth of 0.4 percent during the following four months. The breakout numbers for American-type cheese were both positive and stronger during the second four-month period, but were both negative yet improving during the latter period for all other types of cheese.

Overall domestic consumption of dairy products during the pandemic months from April through October decreased by 1.2 percent, on a milk-equivalent total-milk-solids basis. The only month of positive growth during those seven was September, which was sufficient to slightly improve domestic growth during the August-October period.

In contrast to domestic consumption, U.S. dairy exports increased sharply in 2020. Year-to date through October exports were 15 percent greater, on a milk-equivalent basis, than during the same period a year earlier. Growth has been particularly robust for butter, cheese, dry-skim-milk products, dry whey, whey-protein concentrate and whey-protein isolate.

Monthly U.S. dairy imports reached a peak in 2020 during May-July, when they averaged 7 percent more than monthly imports during the prior four months, January-April, measured by total milk-solids content. That changed abruptly during August-October, when average monthly imports were less than those during January-April by 12 percent.

More than one-third of total milk solids imported into the United States during the first 10 months of 2020 were in the form of concentrated milk proteins – including casein, milk-protein concentrate, whey-protein concentrate, milk-protein isolate and whey-protein isolate. Just less than one-quarter of total milk solids were imported as cheese. Just less than one-fifth came in as extreme-milkfat-containing products, including butter, anhydrous milk fat and extreme-fat creams.

The annual rate of increase in the U.S. milking-cow herd stayed relatively steady during the second and third quarters following a growth spurt during the first quarter. But herd expansion is now accelerating again. There were 43,000 more cows compared to the same months a year earlier during April, August and September. There were 42,000 more in July, but 48,000 more in October and 62,000 more in November.

As a consequence milk-production growth has increased fairly steadily since the first quarter. It increased compared to a year earlier by just 0.5 percent during the second quarter. But it reached 2.1 percent annual growth during August-October and 3 percent during November, according to data released after the time period covered in this report. 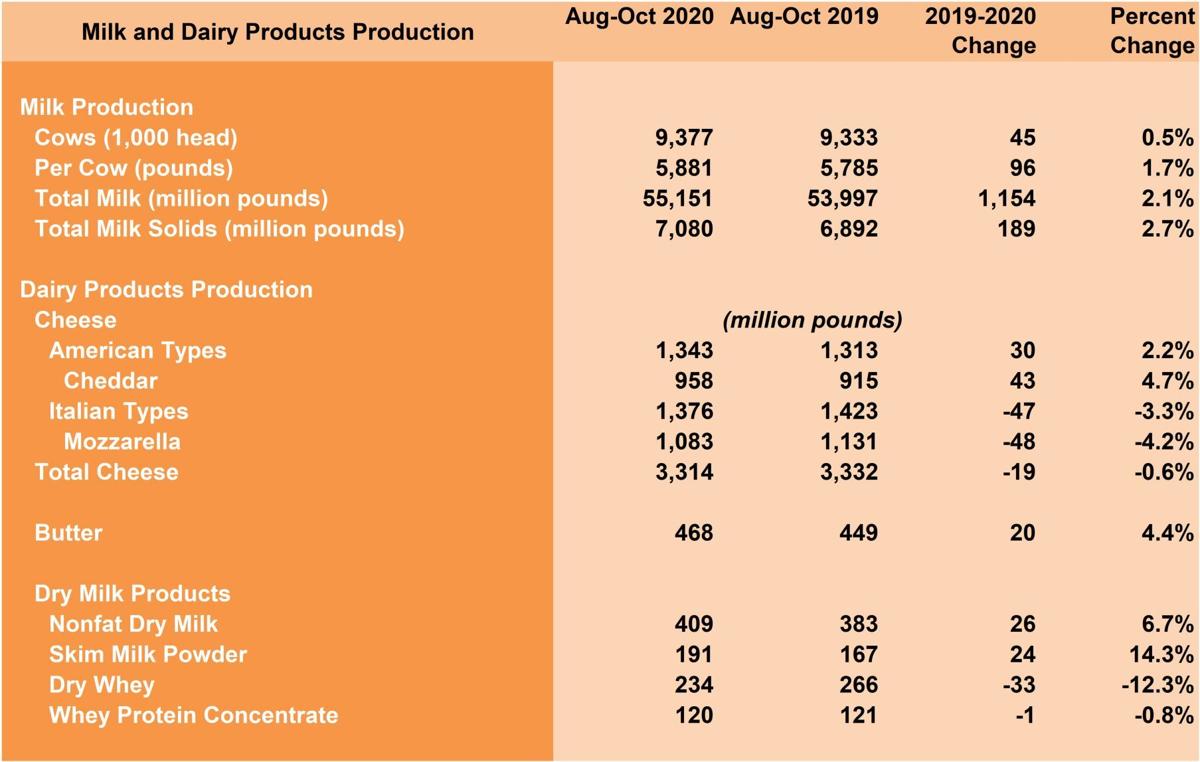 October-ending stocks of the major dairy products were either unchanged or less than a month before. That has assisted cheese in making its second major price increase of 2020.

Monthly cheese prices hit their second major peak of the year in November, but one not quite as good as the first one in July. Nonfat-dry-milk prices have increased slowly but steadily since this past May. Butter prices, following a spectacular three-month increase of more than 50 cents per pound from April to July, gave back 33 cents of that increase by November. The November Class III price was again well more than other federal-order-class prices, producing the second-lowest, negative, producer price differentials of the year in most of the component pricing orders. 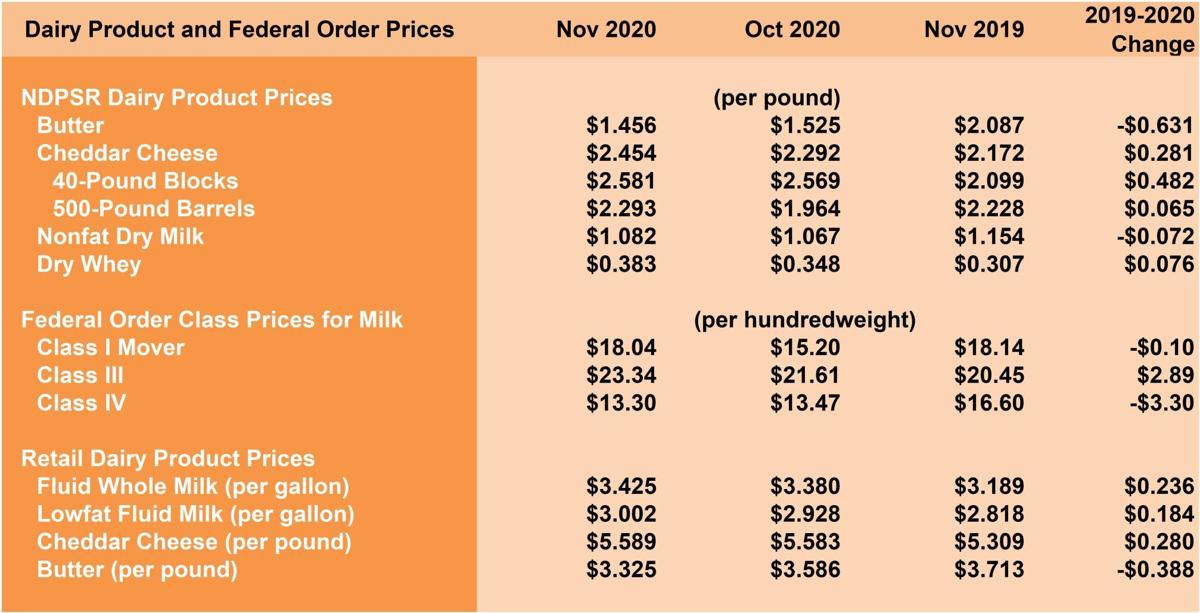 The monthly differences between the retail prices for whole- and low-fat-fluid milk have been generally increasing since the Bureau of Labor Statistics began again to report retail prices for low-fat milk in April 2018, following a reporting hiatus of almost 16 years. During September-November those differences moved decisively to more than 40 cents per gallon for the first time, to average 43.6 cents per gallon during the period.

The unusual pattern and timing of events that have buffeted the dairy industry in 2020 produced monthly gyrations in the U.S. average all-milk price that have averaged $2.30 per hundredweight since the first full month of the pandemic back in April. October’s price increased by that same amount as compared to September, on its way to a second peak for milk prices in 2020. The Dairy Margin Coverage program calculated feed cost, by contrast, decreased steadily by an average of 17 cents per hundredweight of milk each month from April through August. It then abruptly changed course and has increased by more than 50 cents per hundredweight during the following two months, driven by gains in corn and soybean-meal prices.

The weekly National Dairy Product Price Reports, the daily Chicago Mercantile Exchange cash prices and the CME dairy futures are all indicating the monthly cheese price will decrease sharply from its November peak of $2.45 per pound. As of mid-December, futures show a price not much more than $1.60 per pound for the months near the new year, followed by a slow increase to about $1.80 per pound by late summer.

The following reality will determine whether the coming year will more closely resemble the futures-market relative optimism or the USDA’s pessimism. Total consumption of U.S.-produced dairy products will be challenged well into the year, to say the least, to keep pace with milk-production growth. Until food service returns to normal levels, strong retail sales, continued export growth and on-going USDA purchases under Section 32 and other programs at likely funding levels may not produce the demand growth required to absorb the production levels the nation’s dairy farmers are clearly indicating they can achieve, even under the current conditions.

Peter Vitaliano is with the National Milk Producers Federation, a farm-commodity organization representing most of the dairy-marketing cooperatives serving the United States. Visit www.nmpf.org for more information.

Dairy Management Inc. and state, regional and international organizations work together to drive demand for dairy products on behalf of America's dairy farmers, through the programs of the American Dairy Association, the National Dairy Council and the U.S. Dairy Export Council.

Even as the streak of year-over-year volume growth ends after 14 straight months, U.S. dairy exports remain 4 percent ahead of the previous re…