Overall U.S. dairy-product demand appears headed back to pre-pandemic levels. U.S. dairy exports have so far during 2021 achieved near-record numbers as a percent of U.S. milk-solids production. Meanwhile wholesale prices for butter, nonfat-dry milk and dry whey in May were all more than before the pandemic began. But cheese prices continue to struggle.

Capturing the state of dairy through data is unusually difficult at this moment and will be for several months. The industry is entering a series of months during which year-over-year comparisons are affected by the COVID-19 pandemic’s disruptions to dairy markets one year ago at this time. For example U.S. milk production has been increasing, pressuring milk prices since early May. But year-over-year growth comparisons are somewhat misleading due to 2020’s atypical seasonal production patterns. Similarly year-over-year domestic fluid-milk sales decreased sharply this March and April, while commercial cheese use increased sharply in April.

Larger-than-usual measured decreases in domestic fluid-milk sales during March and April decreased year-over-year fluid sales by almost 4 percent during February through April. But the comparison was against greater-than-usual fluid sales during the first months of the pandemic in March and April 2020 – despite supply-chain disruptions during those months. By contrast domestic commercial use of both American-type and other cheese was considerably greater during February through April than during the same months in 2020. That was due in large part to year-over-year increases of more than 20 percent for both types of cheese in April. That was due, in turn, largely to a base effect because domestic use of all cheese was significantly depressed in April 2020. The pandemic registered its first full month of demand destruction in food service, and supply chains had not yet had time to redirect enough cheese to retail outlets. Allowing for that, the large April numbers for cheese indicate a recovery to close to normal consumption this year.

As a broader indicator of the recovery, commercial use of milk in all products – both domestic and total – was generally more during 2021 than during comparable periods two years earlier, prior to the pandemic. Domestic use of dry-skim-dairy ingredients, including the whey complex, largely decreased during the pandemic months as strong export demand competed aggressively with domestic users for the available supply.

U.S. dairy exports surged during the first third of 2021, in spite of continued shipping difficulties. Exports of all major product categories during February through April increased compared to a year earlier by mostly double-digit percentages. Even more significantly, as a percentage of U.S. milk solids, April exports were 18.7 percent – the second best for any month. March exports were 18.4 percent, the third-best. January and February exports also reached increased points for their particular months. 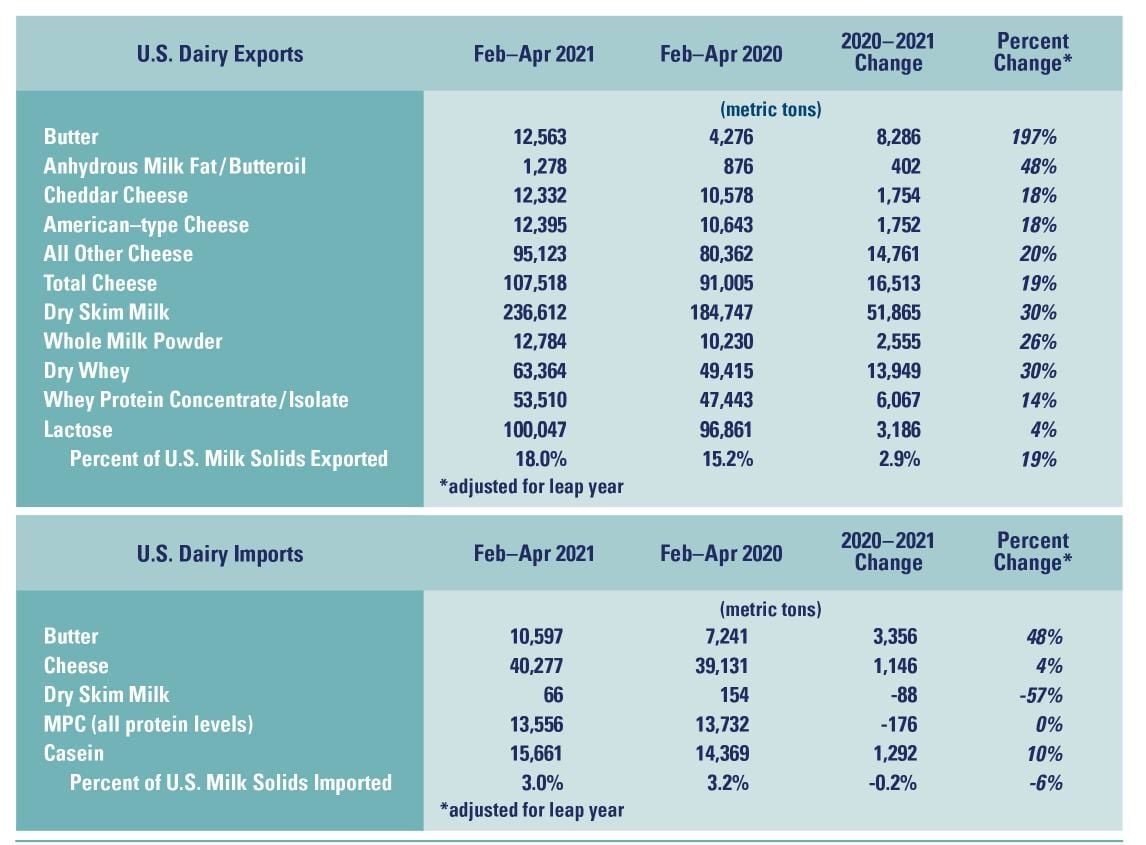 Dairy imports into the United States were more during February through April than a year earlier for many of the major imported product categories. But total imports as a percent of domestic milk-solids production decreased slightly during the period.

April and May production a year ago was sharply less than usual as cooperatives established base-excess plans in response to the sharp disruptions that supply chains experienced at the beginning of the pandemic. Production from July through December did not decrease as rapidly as had been typical going into the summer and fall. Had April 2020 production followed typical seasonal patterns, production during April 2021 would have increased by about 2.2 percent year-over-year. Should 2021 production follow typical seasonal patterns, May production could show an increase of more than 5 percent as compared to actual May 2020. Production will not likely decrease less than 1 percent compared to a year earlier until the last few months of the year. 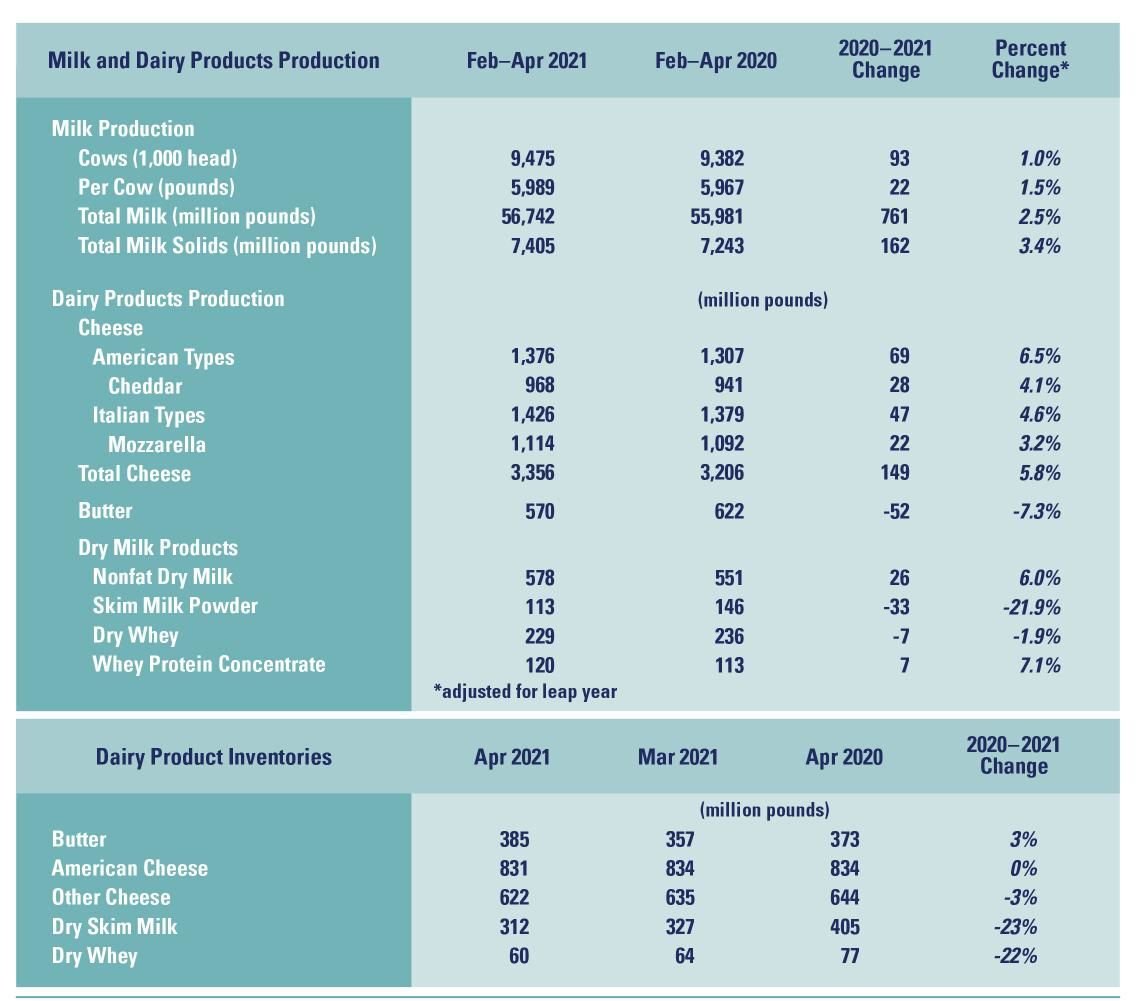 Although also affected by the same base-effect comparison, U.S. milk-solids production growth compared to a year earlier exceeded growth of liquid milk production during February through April by almost a full percentage point, according to data from the U.S. Department of Agriculture’s Economic Research Service.

Month-ending inventories didn’t increase from March to April for American-type cheese and decreased for other cheese. That was somewhat surprising given the strong production growth of American-type cheese in recent months and the weakness of Cheddar-cheese prices. Butter stocks have returned to the general levels of the first several months following the onset of the pandemic a year ago. Stocks of dry-skim-milk and whey products were smaller, reflecting strong export demand. 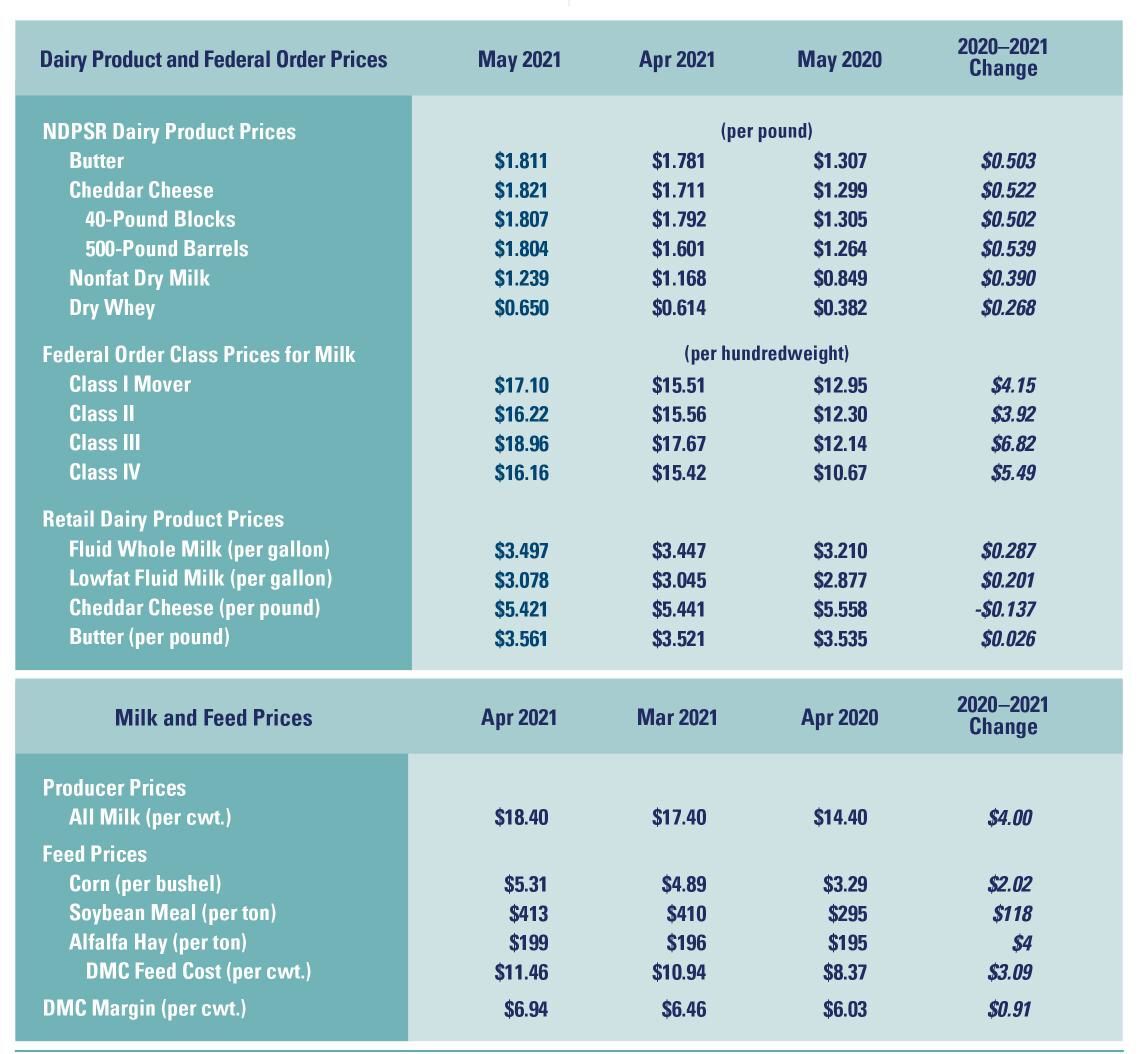