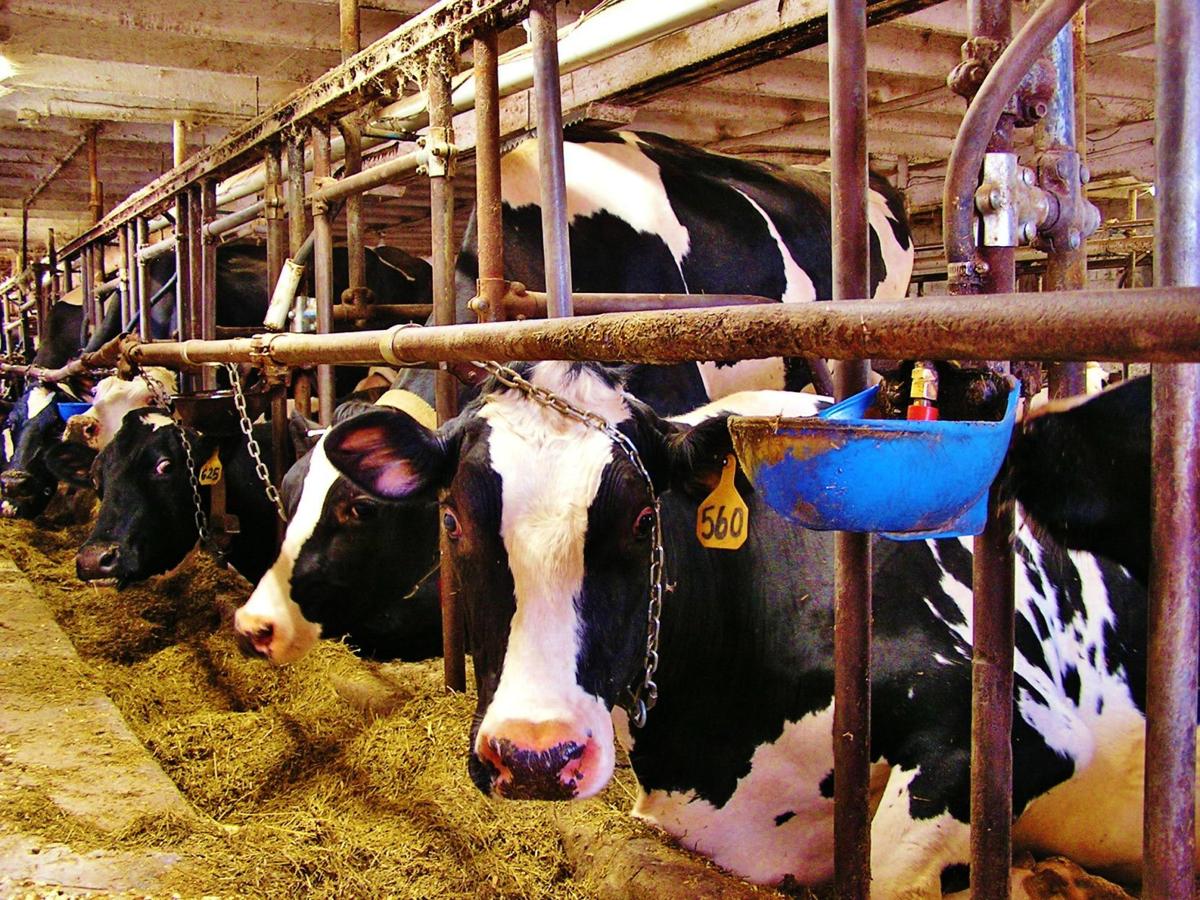 Bright spots for dairy in 2020's first-three quarters of data include increases in total sales of fluid milk, yogurt and butter, which have been buttressed by strong retail demand. Government dairy-donation purchases, along with the differing dynamics of retail vs. food-service sales, continue to be the main movers of domestic demand and prices for dairy products as the end of 2020 draws near. Cheese prices increased again in October, capping the second major cheese-price increase of the pandemic, as a second round of government purchases stoked demand. That ended at the beginning of November, when daily cash-market prices of both blocks and barrels decreased sharply for more than a week; markets anticipated federal purchases ending.

Bright spots for dairy in the year’s first-three quarters of data include increases in total sales of fluid milk, yogurt and butter, which have been buttressed by strong retail demand. Cheese meanwhile has seen mixed progress in commercial use year-to-date, with use that’s been greater for American-type cheese but slightly less for other types. Export growth has also been strong for dry-skim milk, whey products and other-than-American-type cheese, which has offset the decrease in its domestic use. The Dairy Margin Coverage margin dipped a toe to less than $9.50 per hundredweight in September, due to strengthening corn and soybean-meal prices that followed modest but steady declines for the year to that point.

Fluid milk sales began this year at less than year-earlier levels in January and February. But a large spike in use during March as the pandemic first hit managed to boost total first-quarter sales to more than the previous year. Fluid sales have been consistently better on a rolling three-month basis since then, through August. Domestic commercial use of butter was almost 3 percent more than a year ago for 2020, to date through September. There was particularly strong growth in the double digits during March through June. Following decreases in July and August, September growth was again robust, bringing the third quarter in just about flat.

Heavy reliance on food-service sales in the domestic market created stronger headwinds for cheese during the first-three quarters of 2020. That was particularly the case for other-than-American types, much of which is Mozzarella, and for which monthly growth in domestic commercial use was modestly positive only in January and June. U.S. consumption was more-robust for American-type cheese beginning in May, which helped keep domestic use of all cheese just a bit more than flat for the year to date through the third quarter.

Domestic use of dry-skim milk and whey products was sharply less year to date through September, but that was either mostly or entirely offset by strong export growth. Domestic use of whole-milk powder increased for the year to date by almost 25 percent, reflecting strong demand in commercial baking and confectionery use. Aggregate use, on a milk equivalent basis, was generally stronger during the third quarter.

The third quarter produced strong export growth – mostly well into double digits – for all major product categories except lactose and whole-milk powder, for which robust domestic use competed heavily with export sales. Lactose exports began the year strong but have been mostly reduced since May.

Imports were less, by low double digits, for most of the major import categories as well as in total – with the major exception being milk-protein concentrate. 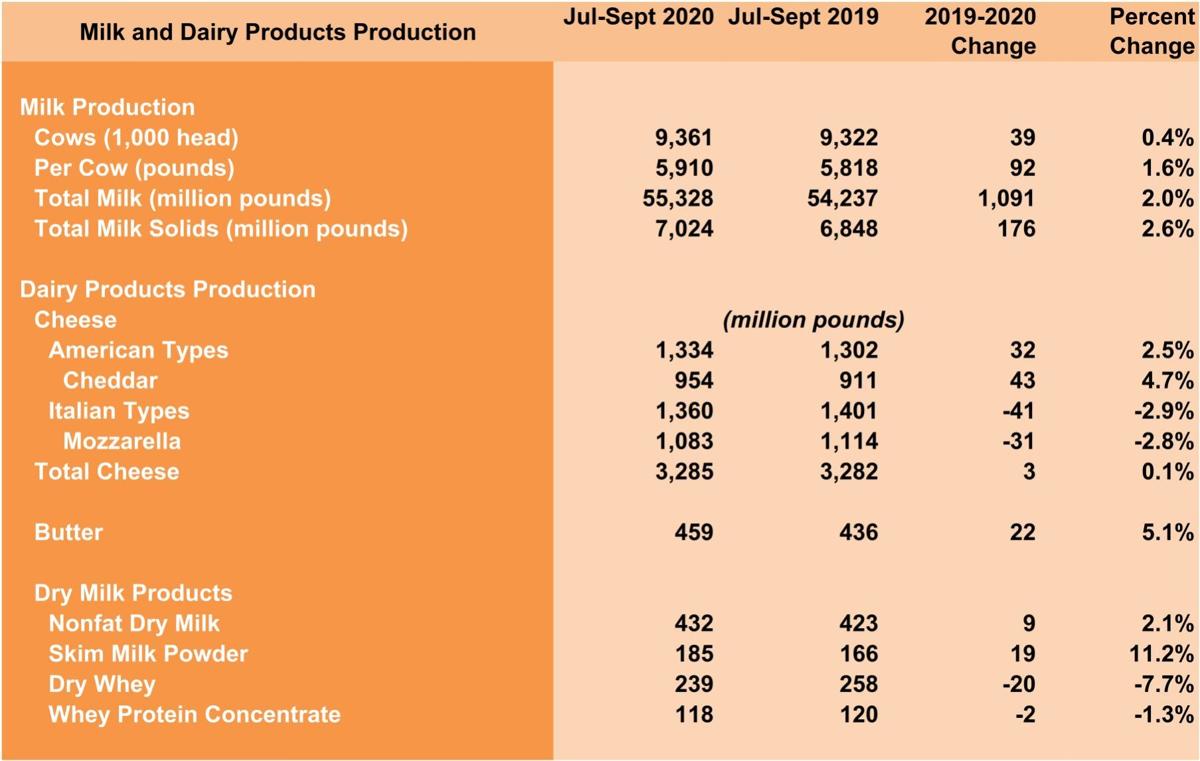 Total U.S. cheese production was essentially unchanged during the third quarter. There were gains in American types, particularly Cheddar. But those gains were offset by decreases in other types, including Mozzarella. Butter production was 5 percent more than a year ago during the quarter. Domestic use was flat but strong export growth absorbed the excess and decreased stocks a bit as well. Total production of dry-skim-milk products grew along with butter.

Commercial stocks of dry-skim milk at the end of September were 5 percent less in volume than a year earlier. But they were 24 percent less year-over-year as measured by days of total commercial use in stock, due to a 20 percent increase in total use that month. Dry whey and cheese saw smaller declines, while butter inventories increased by both measures. Still the inventory situation was different from that seen this past spring, with September dry-skim-milk stockpiles only 60 percent of what they were at the end of April. Butter stocks decreased significantly from May. Cheese inventories were also less at the end of September than in May.

Changes in the monthly dairy-product prices in the National Dairy Product Sales Report from September to October were again relatively modest for butter, nonfat-dry milk and to some extent for dry whey. The report’s cheese prices were again the exception, increasing strongly in October after decreasing sharply a month before – for their second major price increase this year. Another round of USDA food-box purchases were a key driver of the October increase. Remaining often out of sync, as it has for the past several months, the Class I price decreased by more than $3 per hundredweight in October. Class III increased by more than $5 per hundredweight, portending another month of large negative producer price differentials that month.

Retail prices for whole and low-fat fluid milk were less in October than a month earlier, by larger amounts than typical in recent months. Natural Cheddar-cheese prices were slightly less at retail while butter increased slightly. 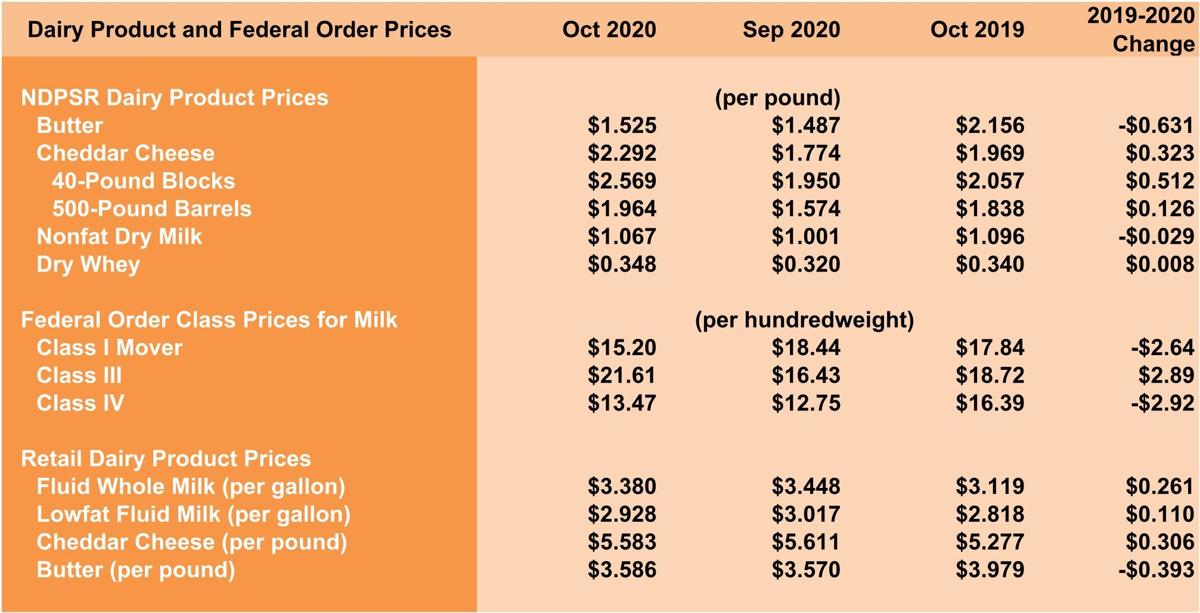 As of mid-November dairy futures indicated that butter and nonfat-dry-milk prices would gradually increase through next year, while dry-whey prices would remain fairly stable. Cheese prices on the other hand were expected to decrease, from almost $2.50 per pound in November to about $1.75 per pound by the end of the winter months. That would decrease milk prices by about $3 per hundredweight during that period.

This outlook effectively assumes that significant USDA purchases, particularly the food-box purchases that have been concentrated in relatively short periods this year, will end. It also takes account of growing milk production. With feed costs projected to increase during the period, the Dairy Margin Coverage margin is expected to decrease to less than $9.50 per hundredweight early in 2021, and generate payments averaging about $1 per hundredweight through at least the first half of 2021.

Peter Vitaliano is with the National Milk Producers Federation, a farm-commodity organization representing most of the dairy-marketing cooperatives serving the United States. Visit www.nmpf.org for more information.

Dairy Management Inc. and state, regional and international organizations work together to drive demand for dairy products on behalf of America's dairy farmers, through the programs of the American Dairy Association, the National Dairy Council and the U.S. Dairy Export Council.

The year 2020 continued until its end to bring turbulent headwinds to dairy demand, which the industry has survived with heightened government…

Even as the streak of year-over-year volume growth ends after 14 straight months, U.S. dairy exports remain 4 percent ahead of the previous re…

Bright spots for dairy in 2020's first-three quarters of data include increases in total sales of fluid milk, yogurt and butter, which have been buttressed by strong retail demand.