Herd expansion appears to be coming to an end in 2020.

Herd expansion appears to be coming to an end in 2020.

The U.S. beef-cattle herd is known to cycle through periods of expansion and contraction about every 10 years or so. The era of inflated feed prices from 2007 to 2013 contributed to one of those contraction phases. Beef-cow numbers decreased to 2014. 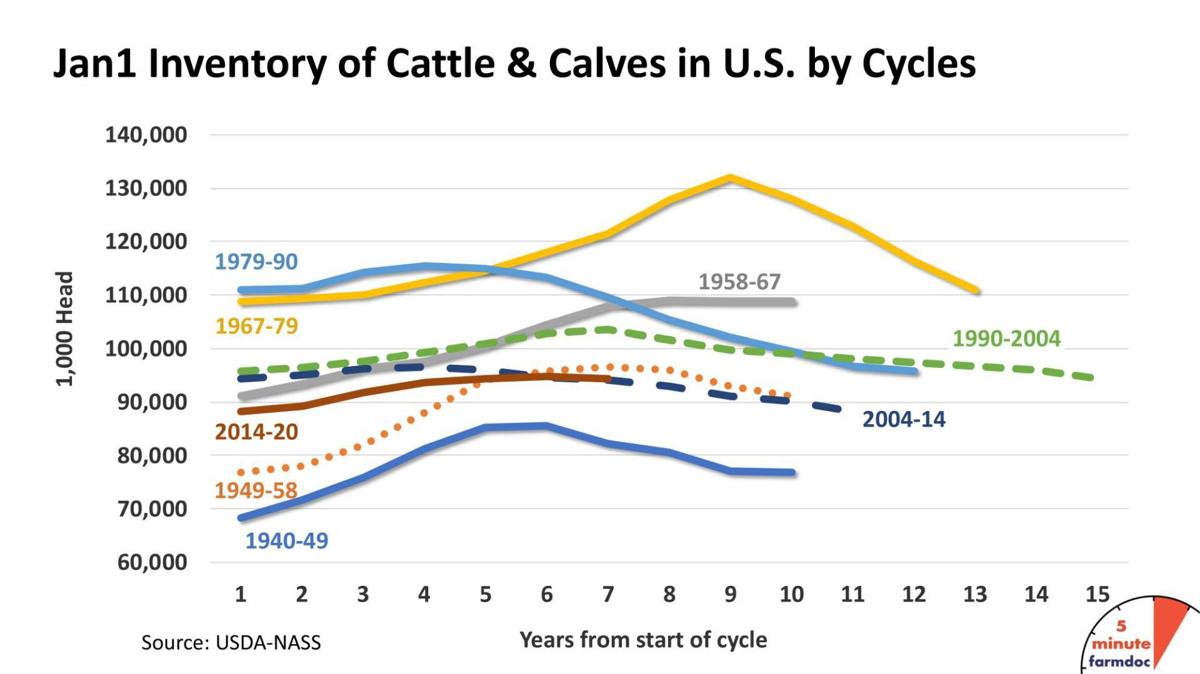 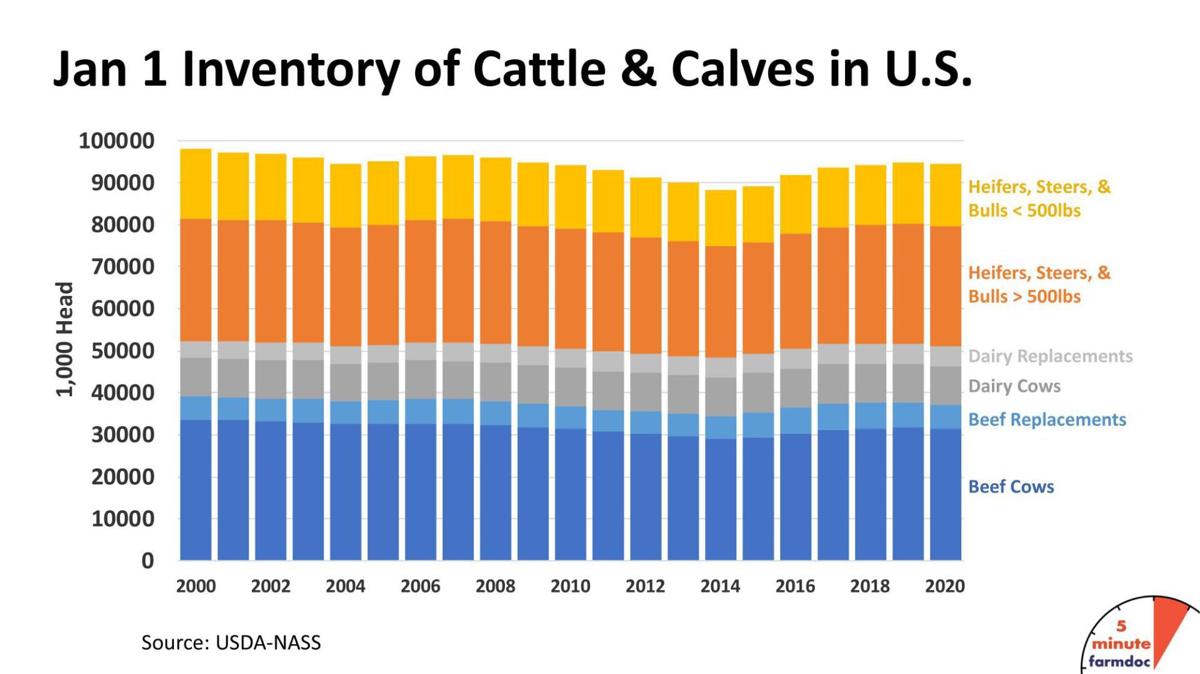 Reduced supplies translate into increased prices, motivating producers to expand. Currently there are about 7 percent more beef cows in the U.S. than during the most reduced point in 2014. But as prices have decreased it looks like the expansion of the beef herd has leveled off.

The U.S. Department of Agriculture’s Jan. 1 cattle-inventory report corroborates earlier signals from July 2019’s report that the expansion phase had come to an end. The total number of cattle and calves in this past July’s report was unchanged from the previous July at 10.3 million head. The total inventory as of Jan. 1, 2020, is 94.4 million head, a slight decrease from 94.8 million head a year ago.

Another sign that producers are unwilling to continue expanding is that replacement heifers have decreased about 2 percent for beef and 1 percent for dairy herds relative to the previous year. The category of other heifers weighing 500 pounds or more has increased 1 percent. The number of calves less than 500 pounds has also increased by about 1 percent. Steers and bulls weighing 500 and more pounds have both decreased 1 percent. 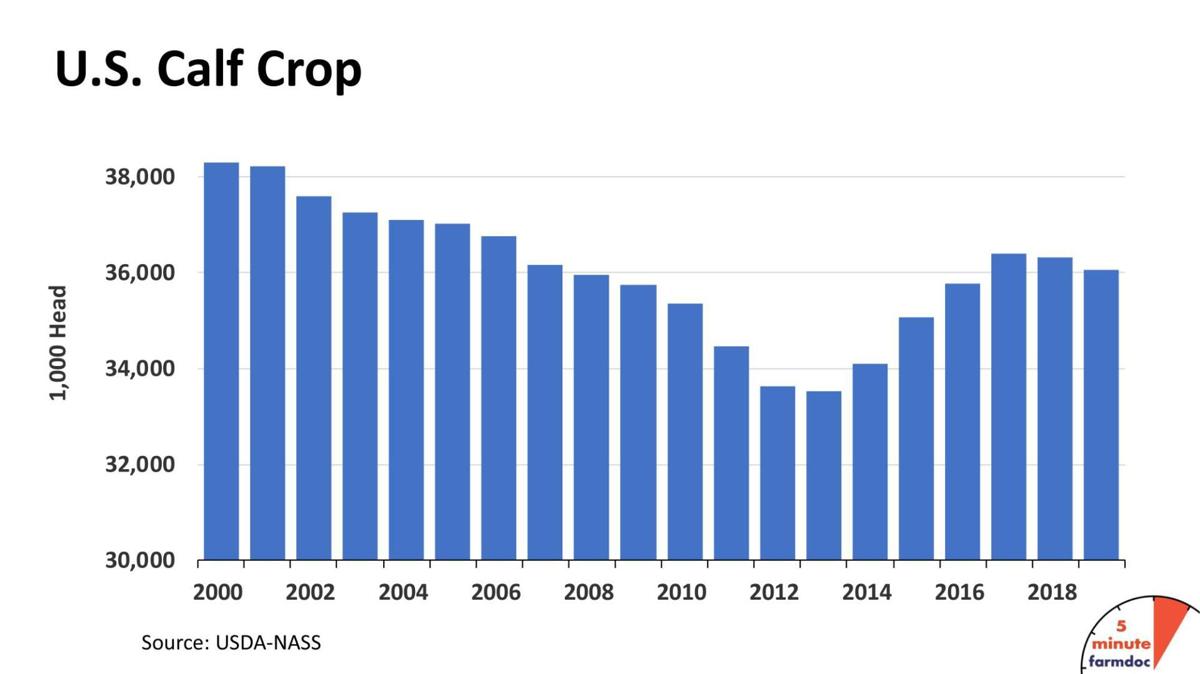 With 1 percent fewer cows and heifers calved, the USDA has decreased its estimate of the 2019 calf crop to 36.1 million head. It’s now 1 percent less than the 2018 level, which should help keep level the number of animals on feed and beef production in 2020 and 2021.

In the recent “Cattle on Feed” report, the USDA indicated almost 12 million head on feed, or about 2 percent more than on Jan. 1, 2019. Feedlots in December placed 3 percent more cattle than a year ago and marketed 5 percent more animals. Each of those numbers was only slightly more than pre-report expectations. 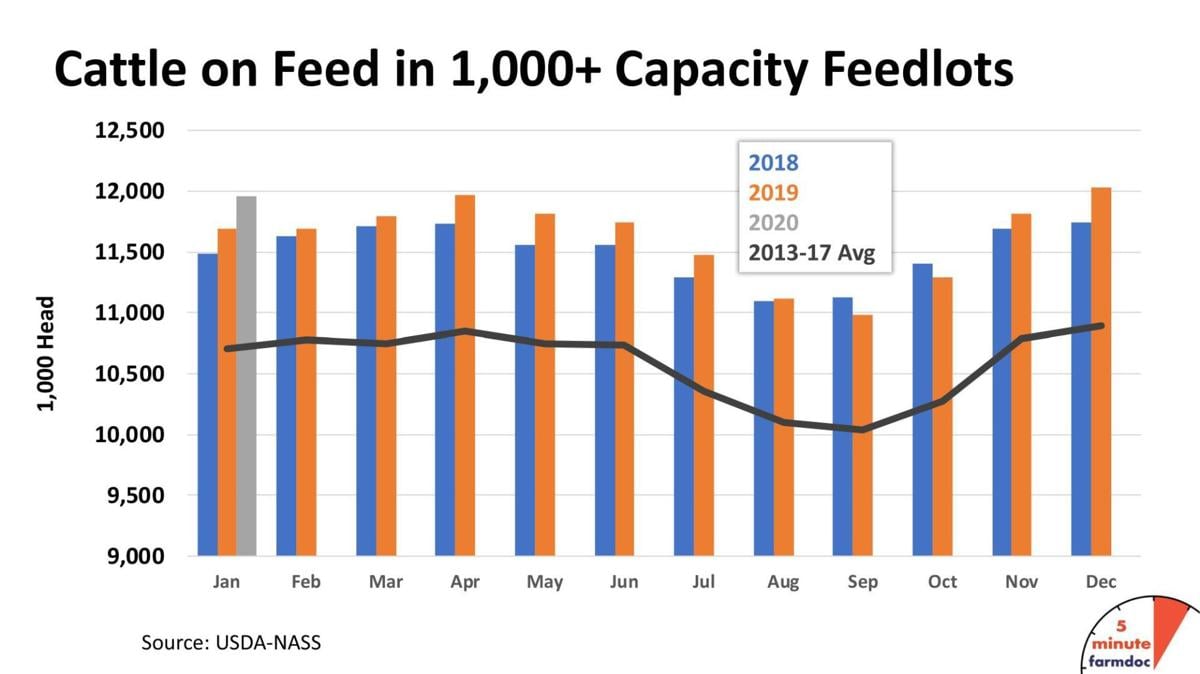 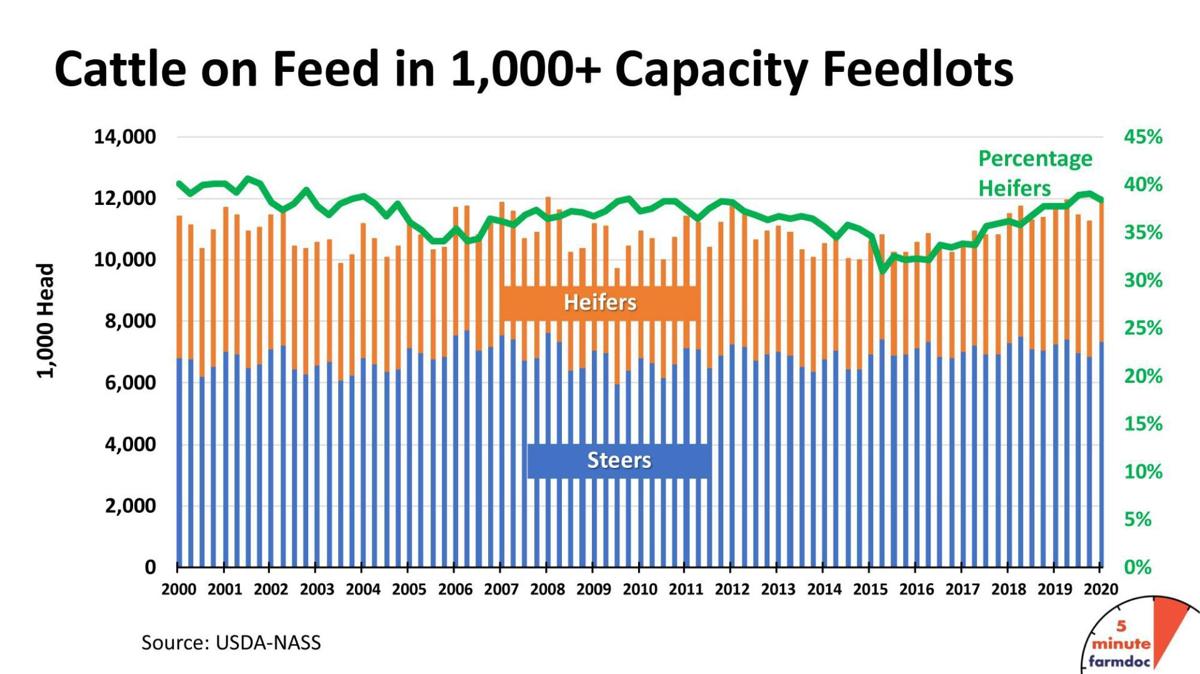 Looking at it another way, heifers comprise about 39 percent of the cattle in feedlots according to recent reports. That’s compared to only 31 percent to 33 percent during much of the previous expansion. That’s additional evidence of the leveling off of the brood-cow expansion.

Taking into account the inventory and cattle-on-feed numbers, beef production is anticipated to be no more than 1 percent more in 2020 than in the previous year. In terms of domestic demand, per capita beef consumption is expected to be about 57 pounds per person in 2020 compared to almost 58 pounds in 2019. That’s about 1 percent to 1.5 percent less. Meanwhile exports could increase 7.5 percent this year. 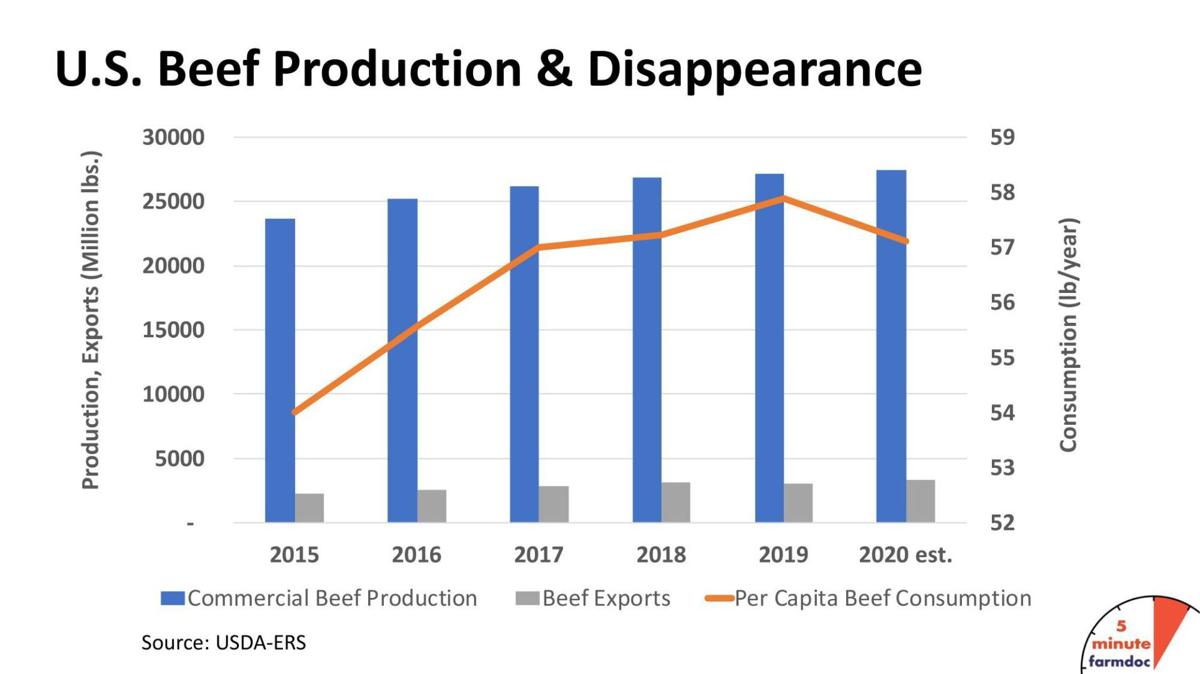 Mexico is the third-largest customer for U.S. beef. Canada is the fifth-largest customer for U.S. beef. A trade agreement with them has been signed into law in the United States. And “Phase 1” of the trade agreement with China is in place. But much uncertainty lingers on the horizon with regard to exports, particularly regarding trade with China. With the coronavirus outbreak there and its spread to other countries, it has implications for economic growth and hence demand. 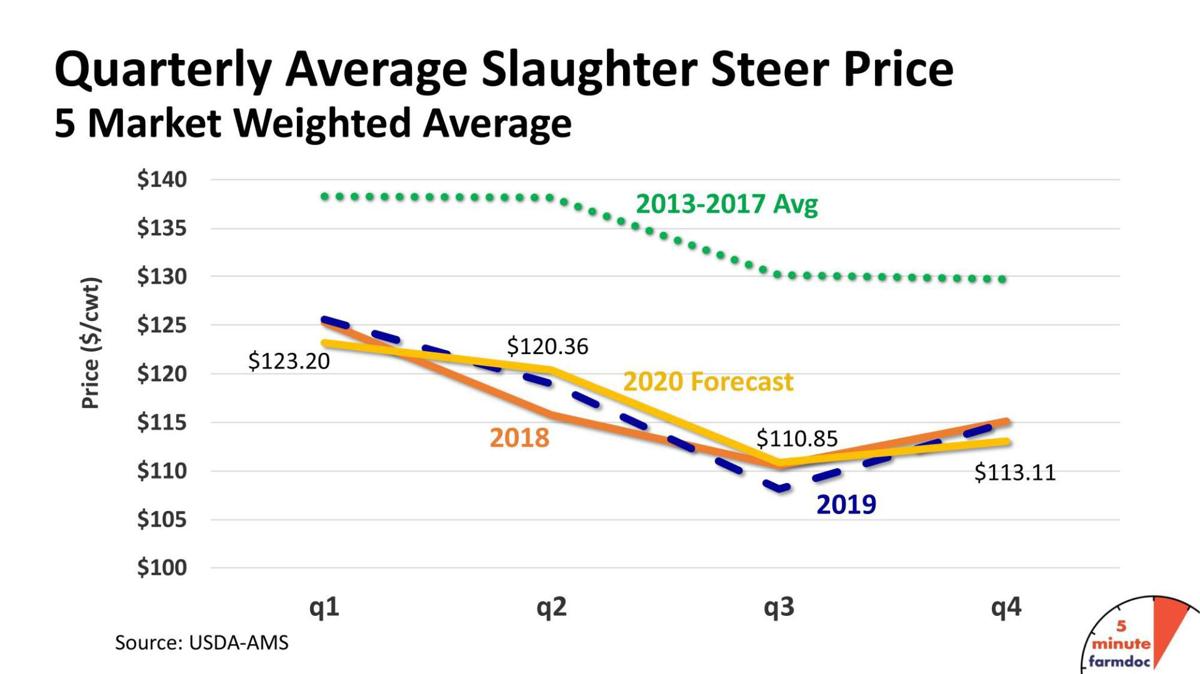 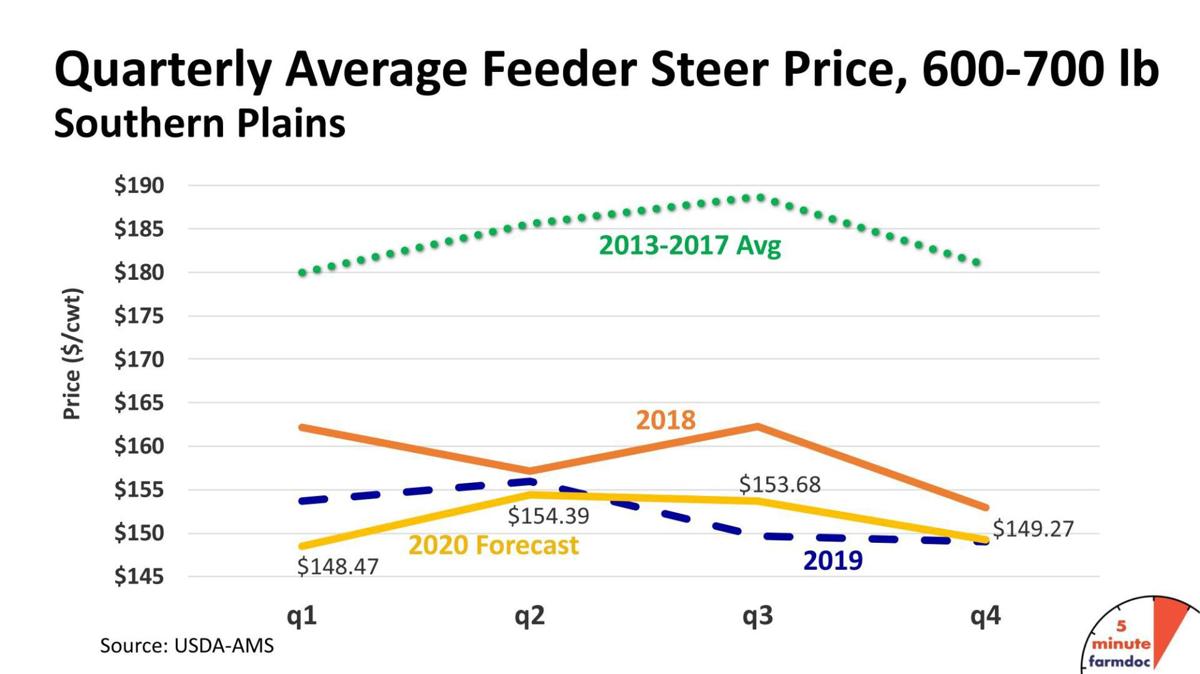 The major factors that could result in notably reduced prices are uncertainties surrounding trade and the coronavirus. If a sick workforce slows economies, that could translate into demand destruction for U.S. beef exports. If cases of the virus already reported in the United States deter travel and hence restaurant expenditures, there’s the potential for even less domestic demand as well.

Jason Franken is an associate professor of agricultural economics in the School of Agriculture at Western Illinois University. His teaching duties include undergraduate courses in agribusiness management, marketing, and futures and options trading. Visit www.wiu.edu for more information.