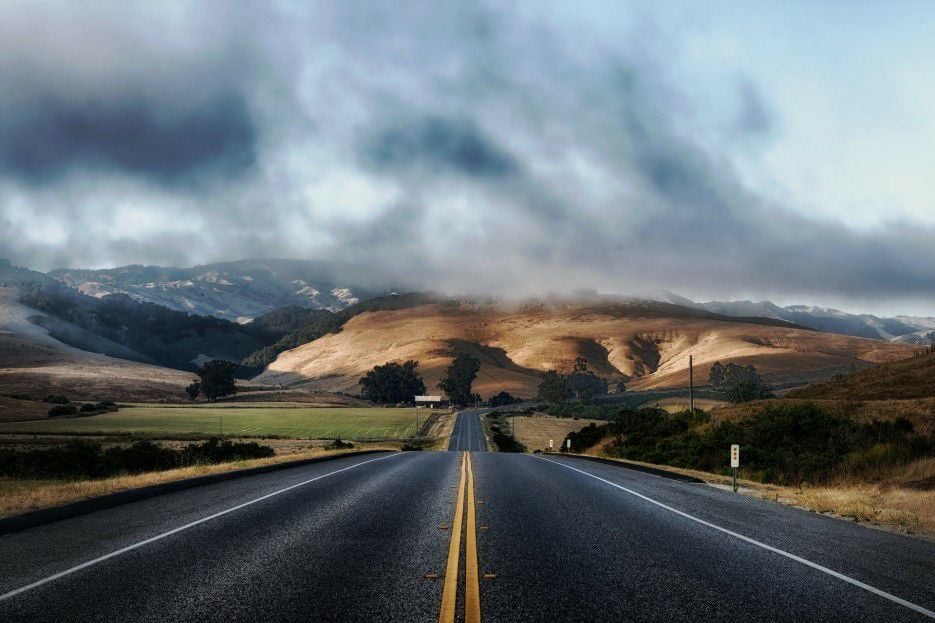 After months of negotiation, the Infrastructure Investment and Jobs Act, also known as the Bipartisan Infrastructure Framework, has been approved by both chambers of Congress and was signed into law Nov. 15 by President Joe Biden. Designed to target investments to a slew of infrastructure shortfalls across the nation, the law provides about $1.2 trillion in funds. This article provides a summary of the funding outlays, with a focus on allotments intended to support farm and ranch families, and their rural communities. 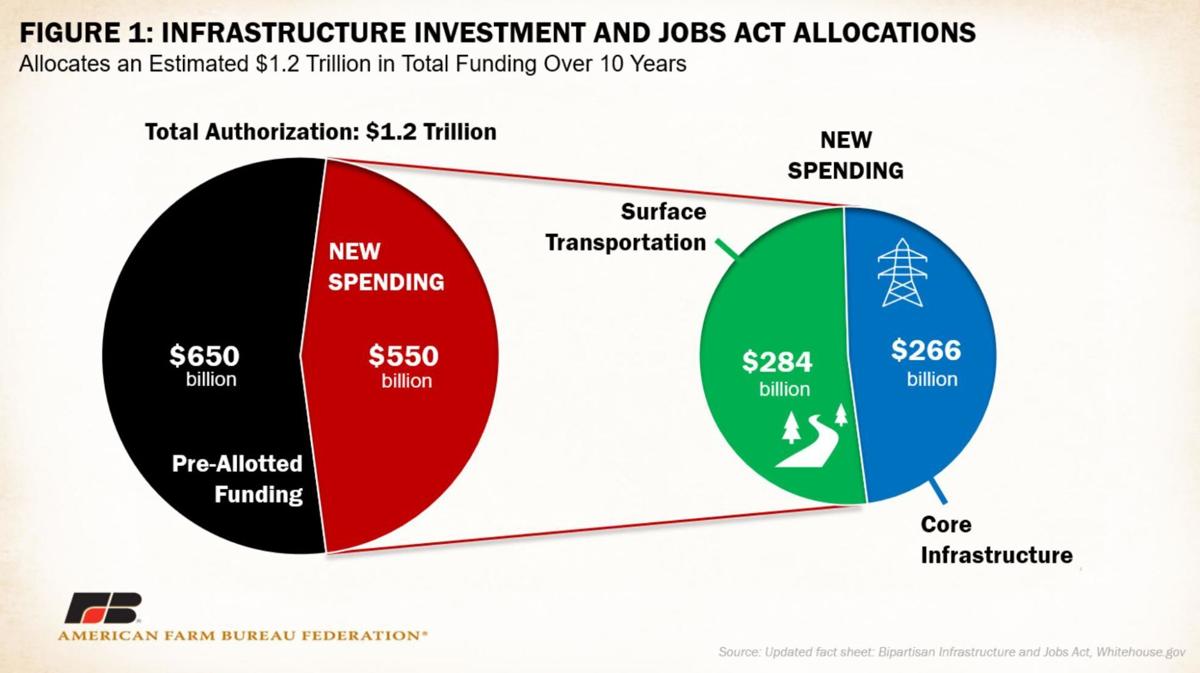 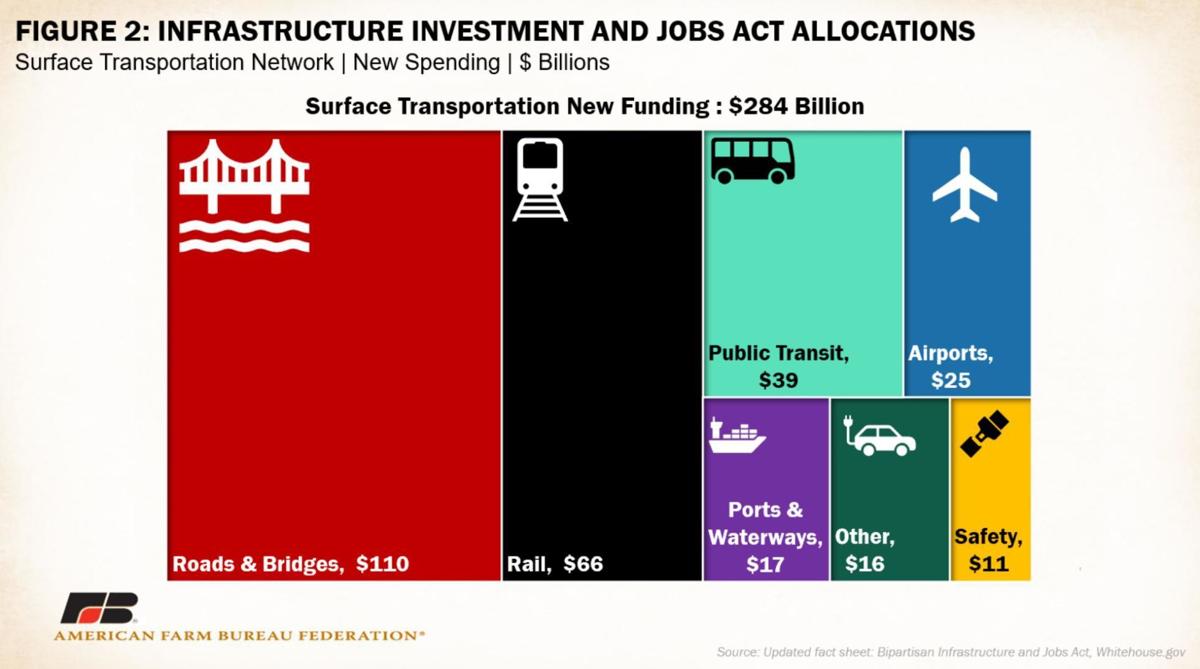 A breakdown of the $284 billion in surface-transportation outlays is presented in Figure 2. Estimates indicate more than 173,000 miles of highways and major roads, and 45,000 bridges are in poor condition. That poses challenges for rural communities that have fewer transportation options for conducting business and accessing food, health care and education.

During the next five years $110 billion of this category is dedicated to improvements to roads, bridges and highways. That includes $40 billion in new funding for bridge repair, replacement and rehabilitation through the Bridge Investment Program. It’s designed to reduce the number of bridges in poor condition or are at risk of poor condition in the next three years. Additionally $2 billion of the funds establishes a new rural-transportation grant program, allowing eligible rural counties to apply for funding of highway and bridge projects to increase connectivity, improve safety and facilitate movement of goods using a federal cost share of 80 percent.

Relatedly the $17 billion dedicated to ports and waterways brings needed investment to a network unable to meet record imports and associated wait times for ocean barges. That includes $9.6 billion designated for Army Corps of Engineers priorities such as $5.2 billion for new construction. Safety allocations include highway- and pedestrian-safety provisions, and pipeline safety and repair.

Categories under “other” include the replacement of school buses and ferries, with a priority on reduced-income and rural areas. Electrical-vehicle-charging infrastructure is also included, with a particular focus on difficult-to-reach communities. 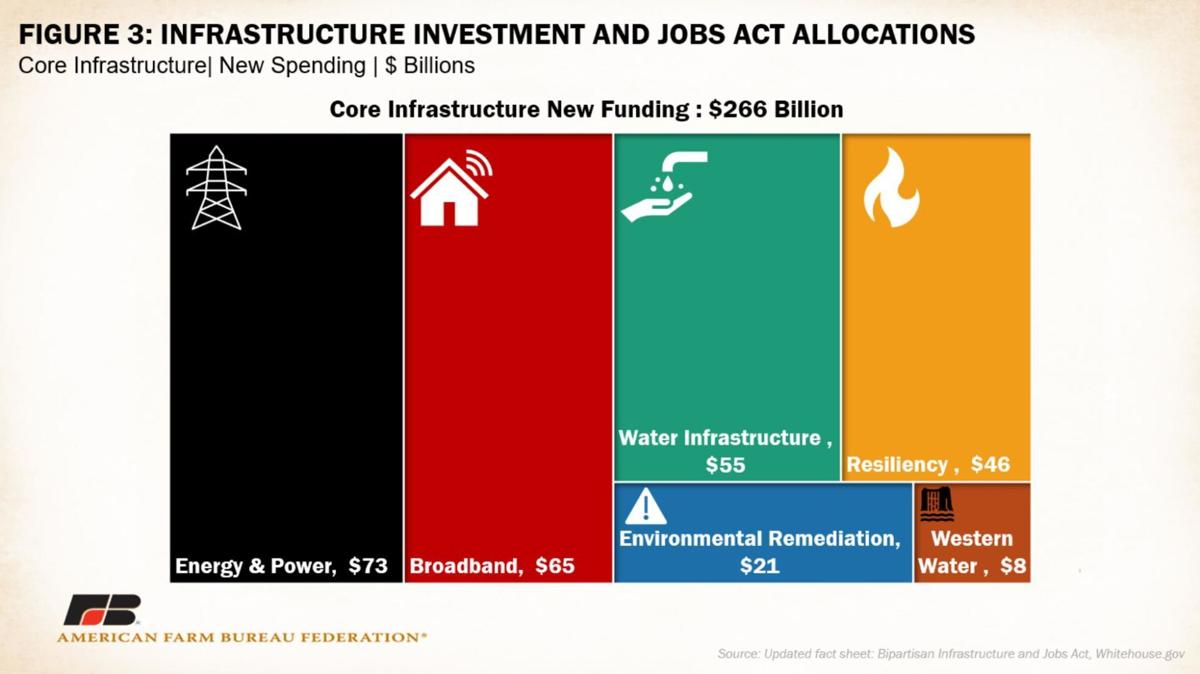 Figure 3 displays a breakdown of outlays categorized as core infrastructure. The $266 billion allocation includes more than $70 billion for energy and power-grid improvements. It’s estimated power outages cost the U.S. economy as much as $55 billion annually, exacerbated by natural disasters from coast to coast. Outlays for modernizing the power grid include general grant programs to reduce the impact of extreme weather, wildfire and natural disasters on the power system. It also includes $3 billion to incentivize battery production and manufacturing in the United States.

More than 30 million Americans have little or no access to high-speed internet. Included in broadband funding of $65 billion is $42.45 billion for the Broadband Equity, Access and Deployment Program, which will make grants to states for broadband deployment – improving high-speed-internet access across rural areas. Projects would need to meet a minimum upload-download standard of 100-20 megabits per second. All funding recipients must offer reduced-cost plans in order to receive funding.

An additional $2 billion is set aside to support programs managed by the U.S. Department of Agriculture, including the ReConnect Program, that provide loans and grants to fund acquisition, construction and maintenance of facilities providing service in rural areas. To increase competition and reduce operating costs, $1 billion is allocated for a “middle mile” grant program to support the construction, improvement and acquisition of middle-mile infrastructure that will connect to last-mile networks.

• $14.2 billion is used to create a permanent Affordable Connectivity Benefit to ensure reduced-income families can access the internet.

• $600 million is set to allow states to issue Private Activity Bonds to finance broadband deployment in rural areas where a majority of households do not have access to the internet. 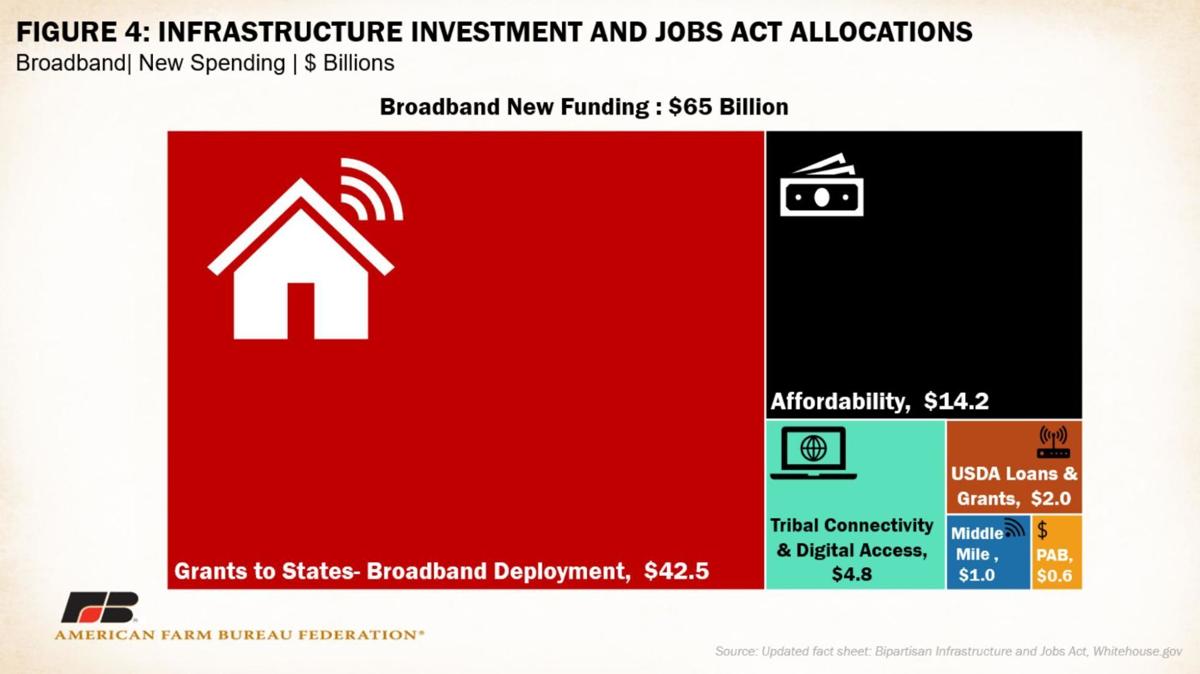 • $1 billion is allocated for water-recycling projects.

• $300 million is set for drought-contingency plans including $50 million for Upper Basin states.

The $46 billion for resiliency includes $7 billion for Army Corps of Engineers flood-mitigation priorities.

• $10 billion is set aside for a bioproduct pilot program at the USDA in partnership with land-grant universities to study the benefits of using materials derived from agricultural commodities in the production of consumer and construction products.

• $918 million is set aside through five years for the USDA’s watershed programs, with the largest share of the funding – some $500 million – going to the Watershed and Flood Prevention Operations program, which is administered through the USDA’s Natural Resources Conservation Service.

• $118 million is earmarked for the Watershed Rehabilitation Program, which provides assistance to renovate dams.

• $300 million is allocated for wildfire resilience in the Emergency Watershed Protection Program.

• $900 million will allow the U.S. Department of the Interior and the U.S. Forest Service to carry out hazardous-fuel-reduction projects.

• Sec. 23018 of the law includes an exemption for livestock and insect haulers from hours-of-service regulations within a 150-air-mile radius from their final destinations.

The Bipartisan Infrastructure Framework attempts to address the numerous infrastructure shortfalls facing rural America. Vital funding to improve roads and bridges, increase capacity at ports and rail terminals, and connect families may lessen the supply-chain gridlock that has hindered farmer and rancher abilities to operate. Further funding for aging western-water infrastructure and wildfire-fuel reduction can relieve stress for thousands of businesses facing constant threats from drought and wildfire conditions. Other provisions support projects to make the power grid more secure, allow states and counties to access funds for backlogged projects, and reduce hours of service burdens on livestock haulers.

It is important to note the Bipartisan Infrastructure Framework is separate from the Build Back Better Act currently under consideration by Congress.

With more than 70 percent of the American West, Southwest and Northern Plains categorized in D3 severe drought or worse since June, the Americ…