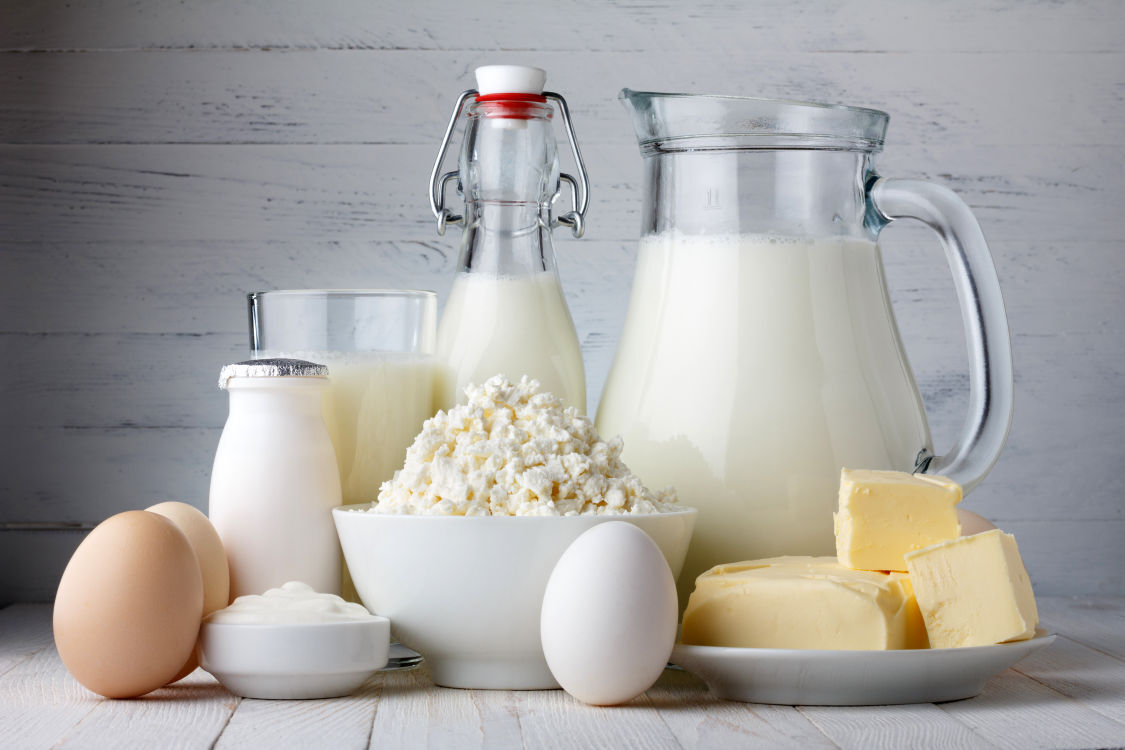 Even as the streak of year-over-year volume growth ends after 14 straight months, U.S. dairy exports remain 4 percent ahead of the previous record with one month to go. 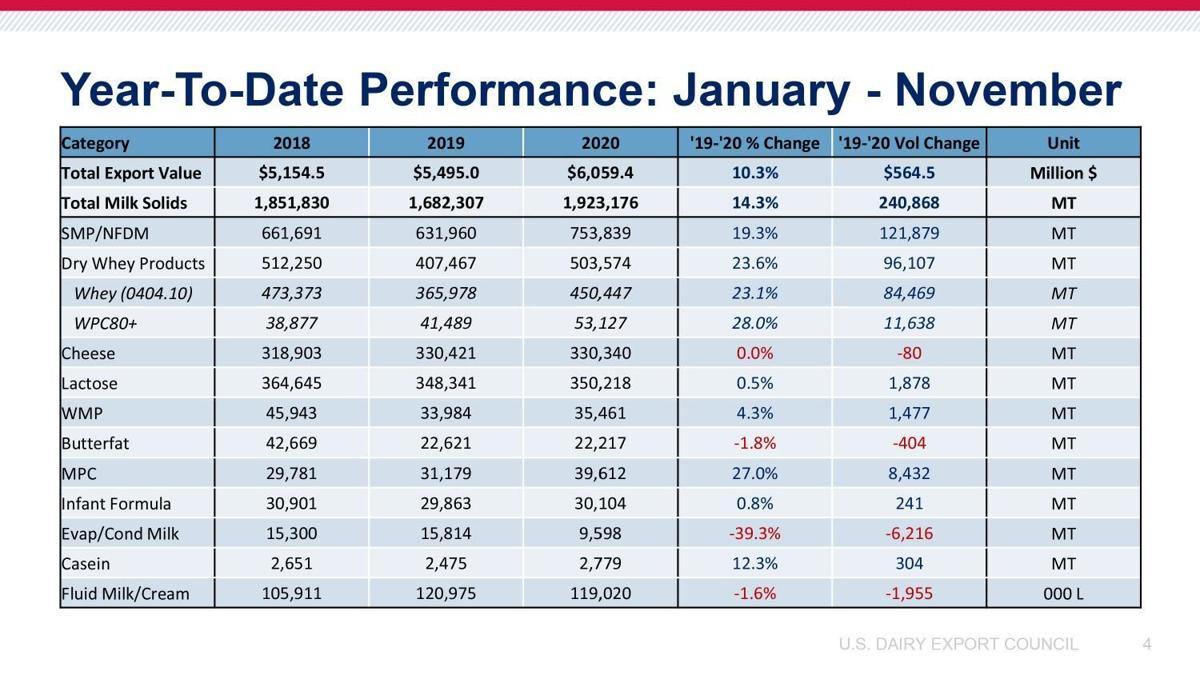 November did little overall to dampen year-to-date dairy-export volume and value. U.S. dairy-export volume on a milk-solids equivalent basis through 11 months increased 14 percent as compared to 2019, to a total of 1,923,176 metric tons – 71,345 metric tons greater than the previous record year in 2018. Value is on a similar trajectory, increasing 10 percent as compared to 2019 – to $6.06 billion through November. Both volume and value have already surpassed 2019 year-end levels. 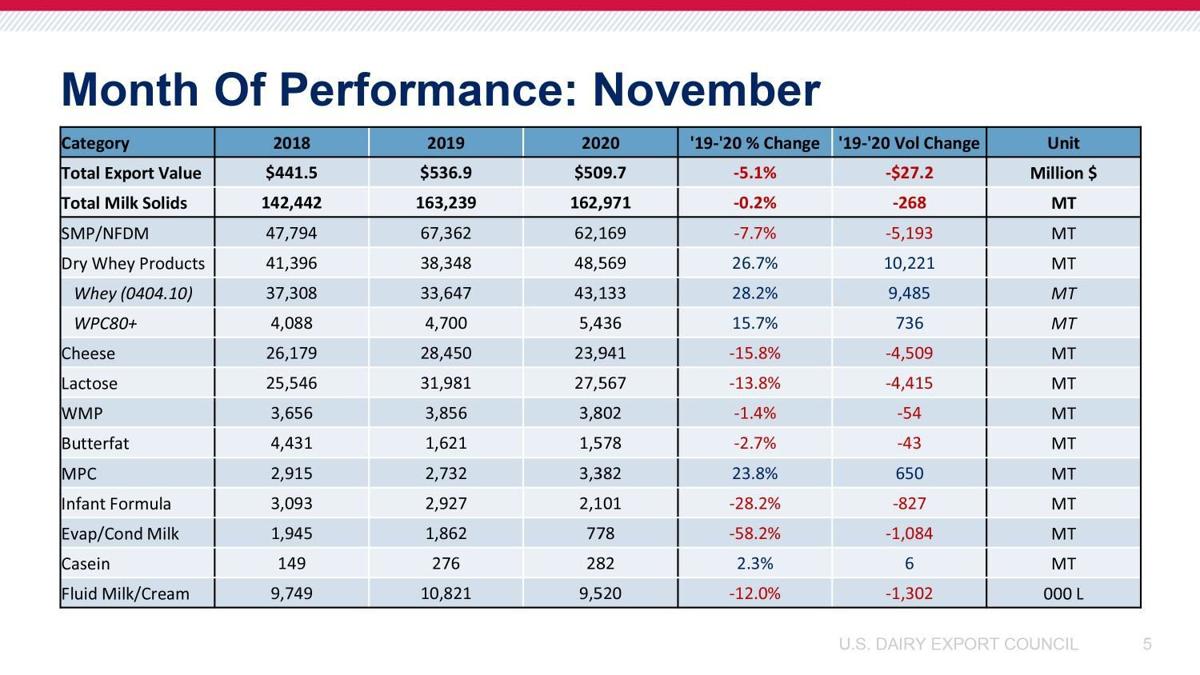 But U.S. dairy exports declined on a milk-solids equivalent basis for the first time in 2020, decreasing 0.2 percent in November. A 27 percent gain in whey products – by 10,221 metric tons – was not enough to account for reduced volumes.

As a greater-value product on a per-metric-ton basis, the diminished cheese exports – in part caused by record U.S. domestic prices in the summer and fall – contributed to the 5.6 percent decline in total value for the month. 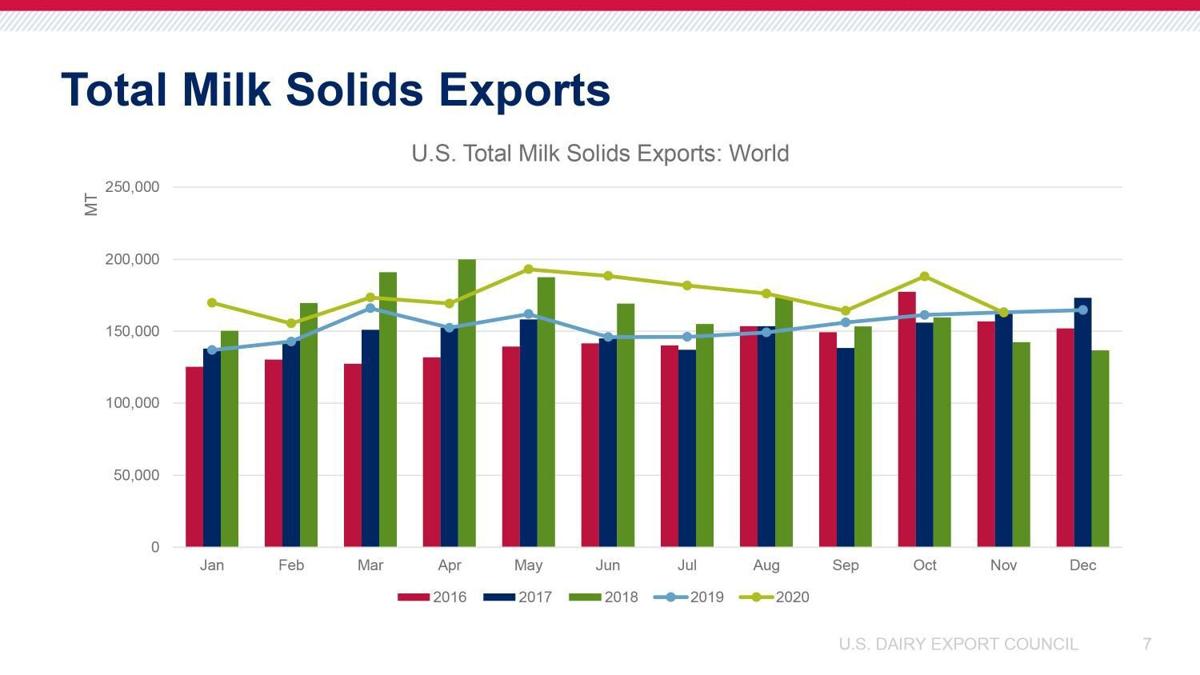 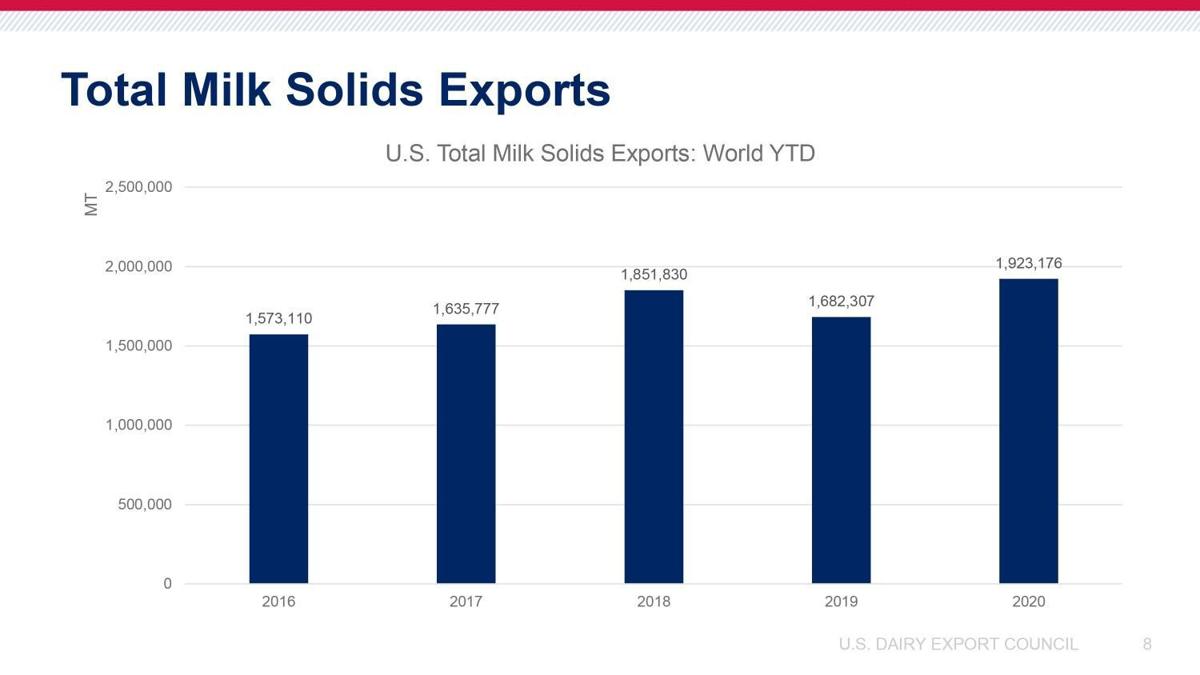 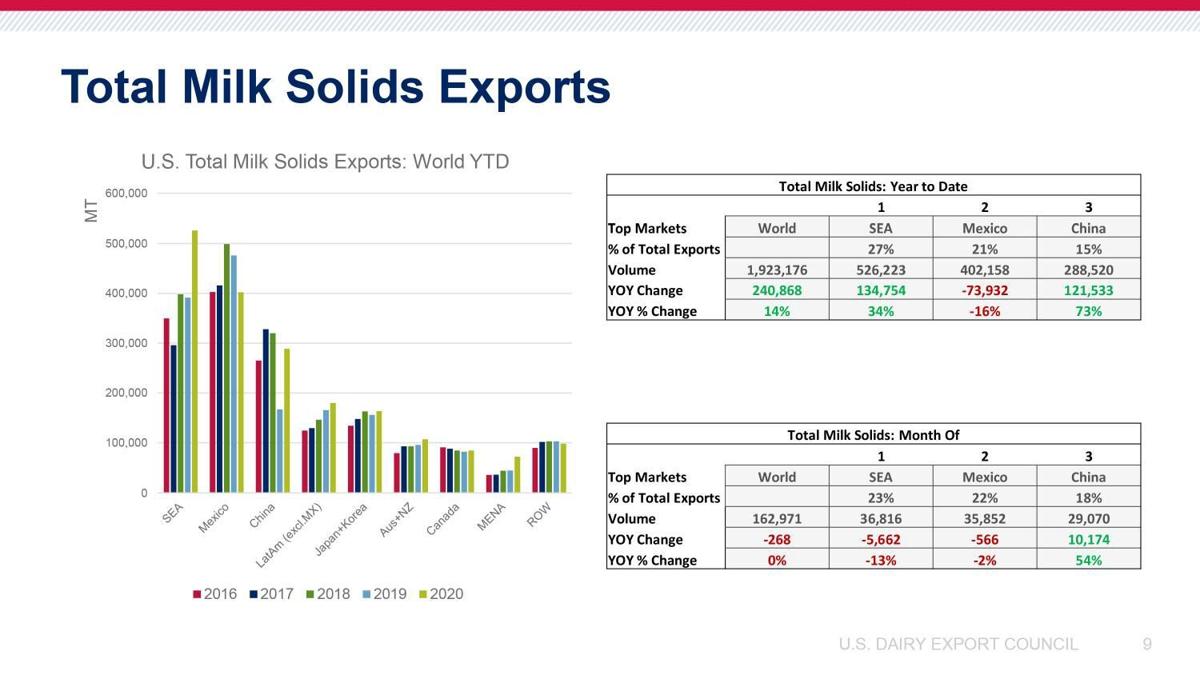 U.S. whey exports delivered another month of growth in November to help mitigate declines in milk powder, cheese and lactose. Whey volume increased 27 percent to 48,569 metric tons for the month, and has increased 24 percent year-to-date.

The major factors driving U.S. whey sales remain the same – heavy Chinese purchasing to support efforts to rebuild a pig herd decimated by African swine fever. China reported its herd had reached about 90 percent of normal levels at the end of November 2020. But pork output is still far short of demand; that as well as dry-whey pricing levels suggest strong Chinese buying activity. So we expect whey-import gains to persist into the new year. Volumes to China demonstrate that the market has moved from recovery to demand expansion.

U.S. whey shipments to China overall more than doubled in November to 21,616 metric tons and increased 111 percent year-to-date. U.S. suppliers have been able to grow volume and recapture market share in large part due to the retaliatory tariff exemption secured in 2019 and renewed for another 12 months in 2020. 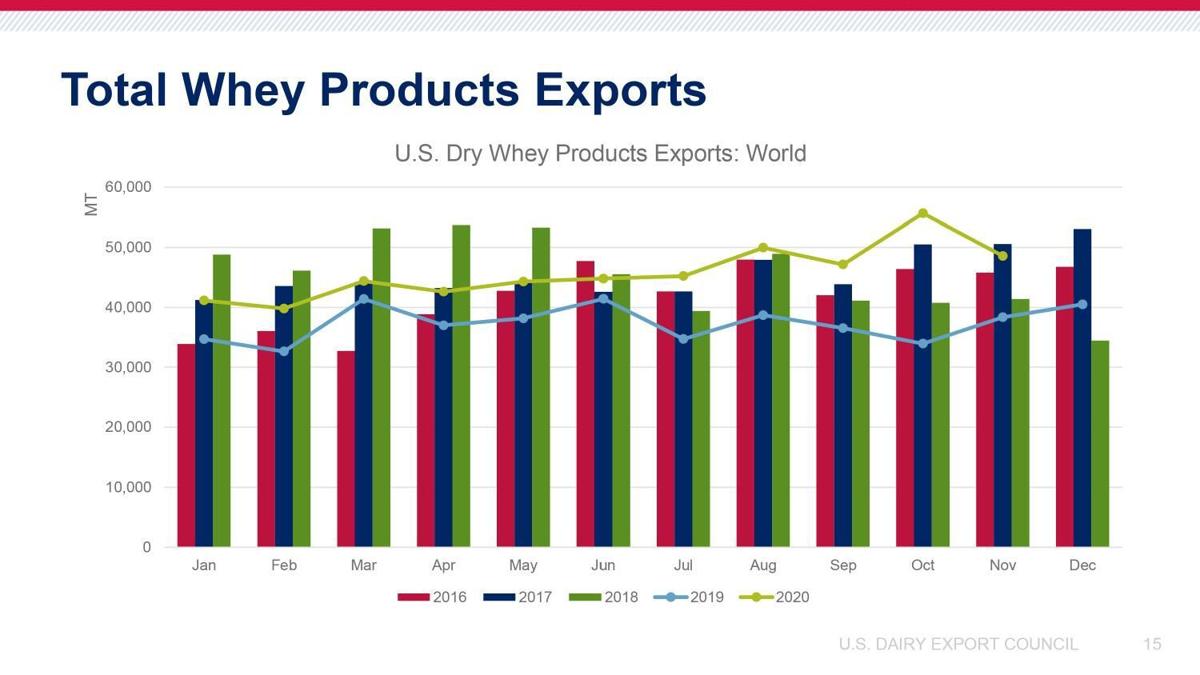 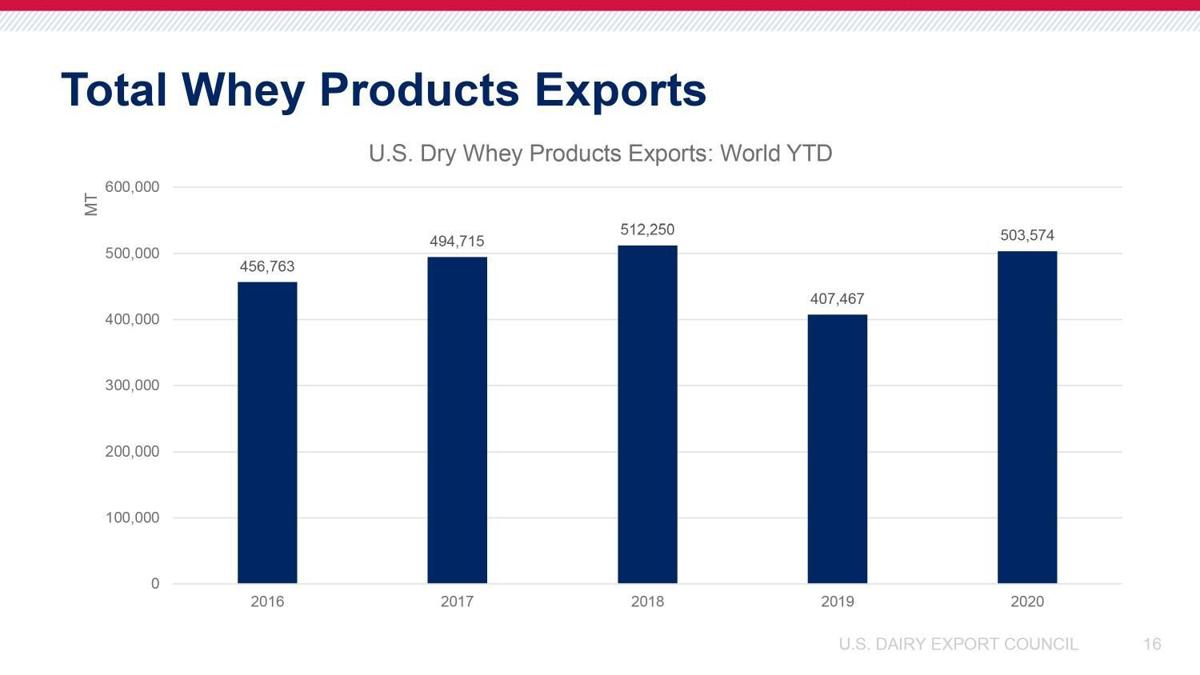 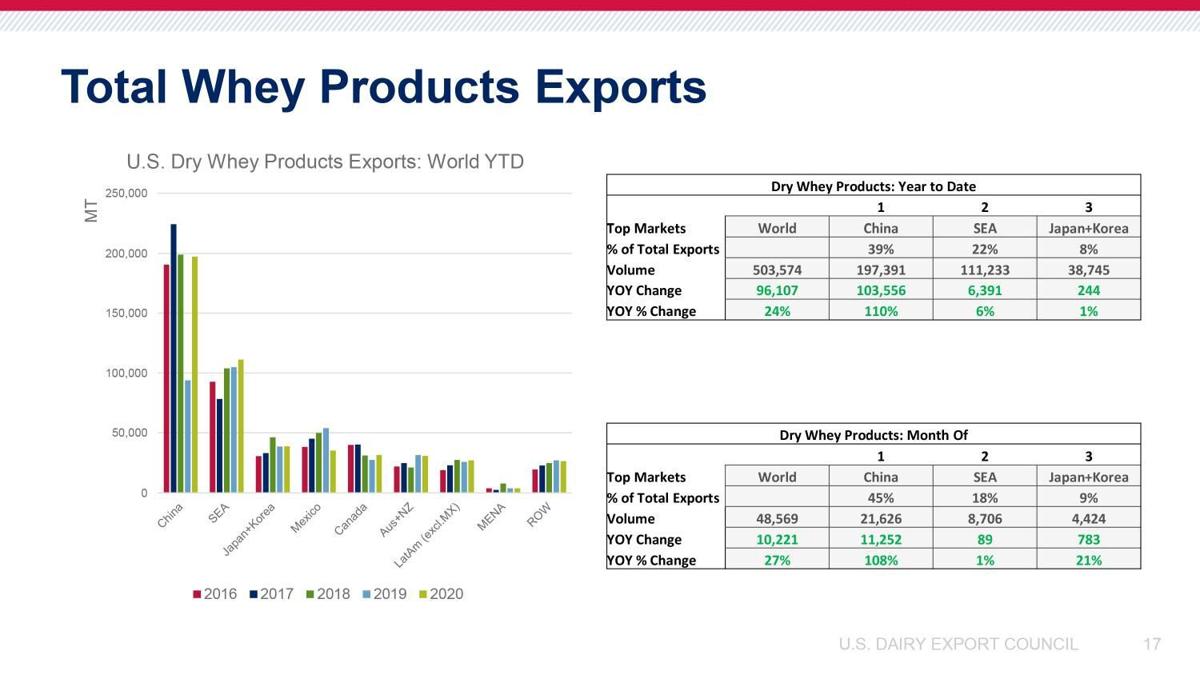 China also topped all buyers in November for greater-value whey products – WPC80+. Volume soared 254 percent to 1,740 metric tons for the month. Reinforced by its nutritional reputation – a particular selling point during the pandemic period where we have seen populations focus more squarely than ever on healthy eating – U.S. WPC80+ exports continue to find more broad-based geographical growth, setting new records every year since 2016. With November’s data, 2020 has already guaranteed another record year. Exports all saw big gains in November.

For much of the past year we’ve talked about Mexico buying less nonfat-dry-milk and skim-milk powder, a development that has driven U.S. suppliers to look elsewhere – especially to Southeast Asia. That trend abated in November with shipments of nonfat-dry-milk and skim-milk powder to Mexico posting the second-biggest month of the year behind only October, gaining 16 percent – 3,366 metric tons – as compared to November 2019. It appears that powder demand, while still not consistently back to pre-COVID levels, may be on the road to recovery with an improved fourth quarter. 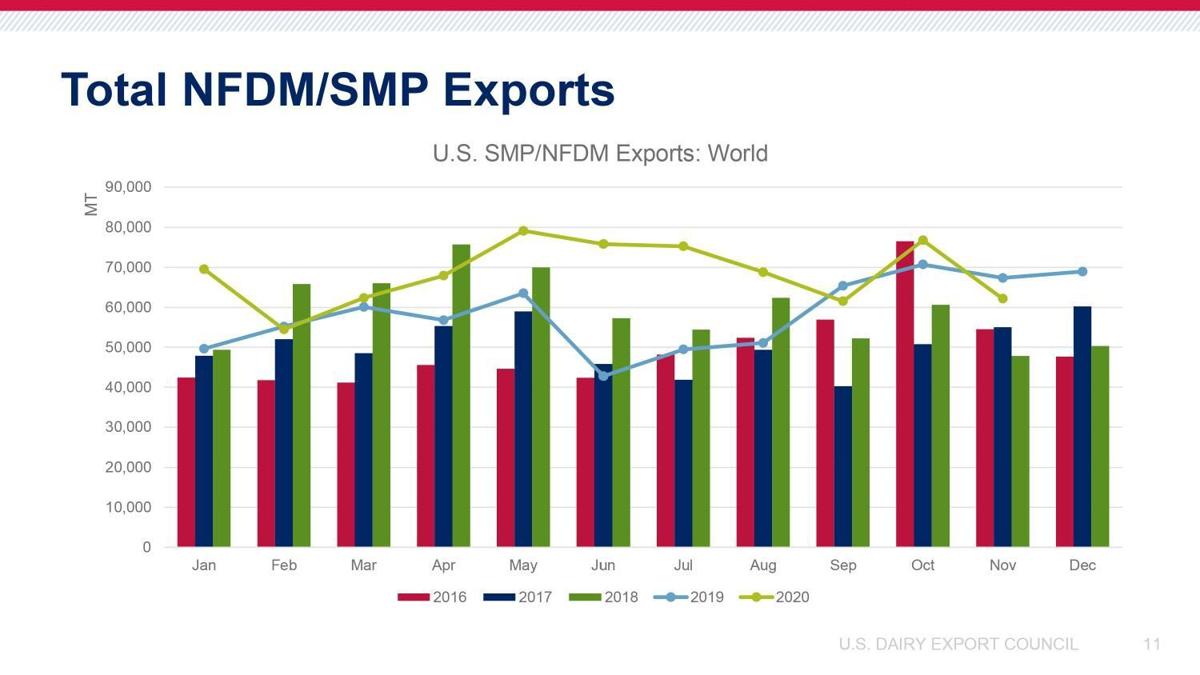 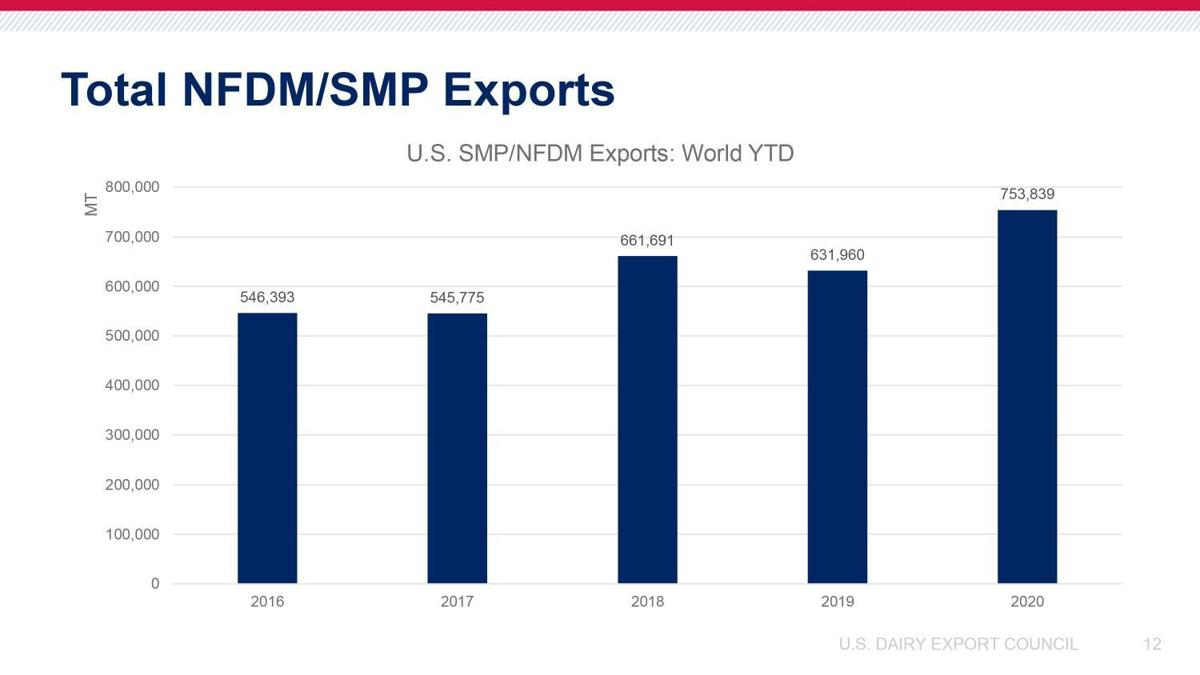 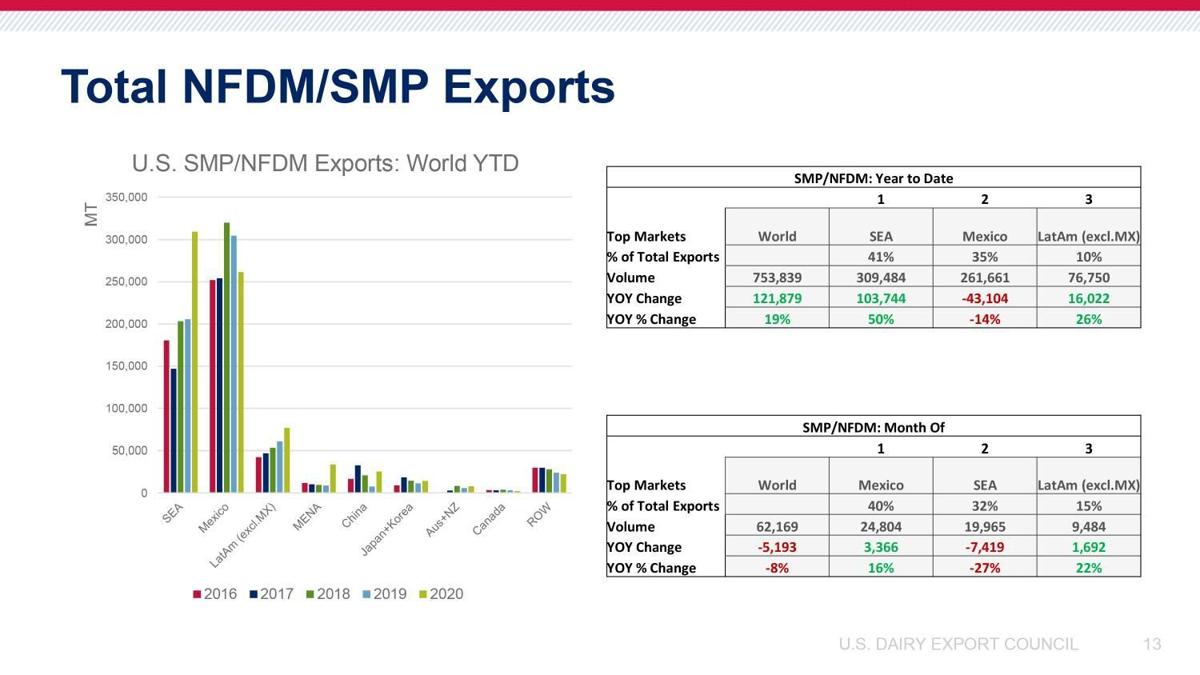 On the flip side exports of cheese to Mexico weakened significantly. Reduced consumer demand inside of Mexico due to the COVID-19 pandemic and its severe economic consequences likely contributed to November’s 38 percent decline – by 3,356 metric tons – in cheese exports to Mexico. The bigger factor was probably U.S. prices incentivizing international buyers to delay purchases during the summer and fall when domestic spot prices kept breaking records and cheese production was short compared to retail and food-box demand. But despite the pandemic, year-to-date cheese volumes to Mexico remain close to prior-year levels, decreasing just 1 percent. 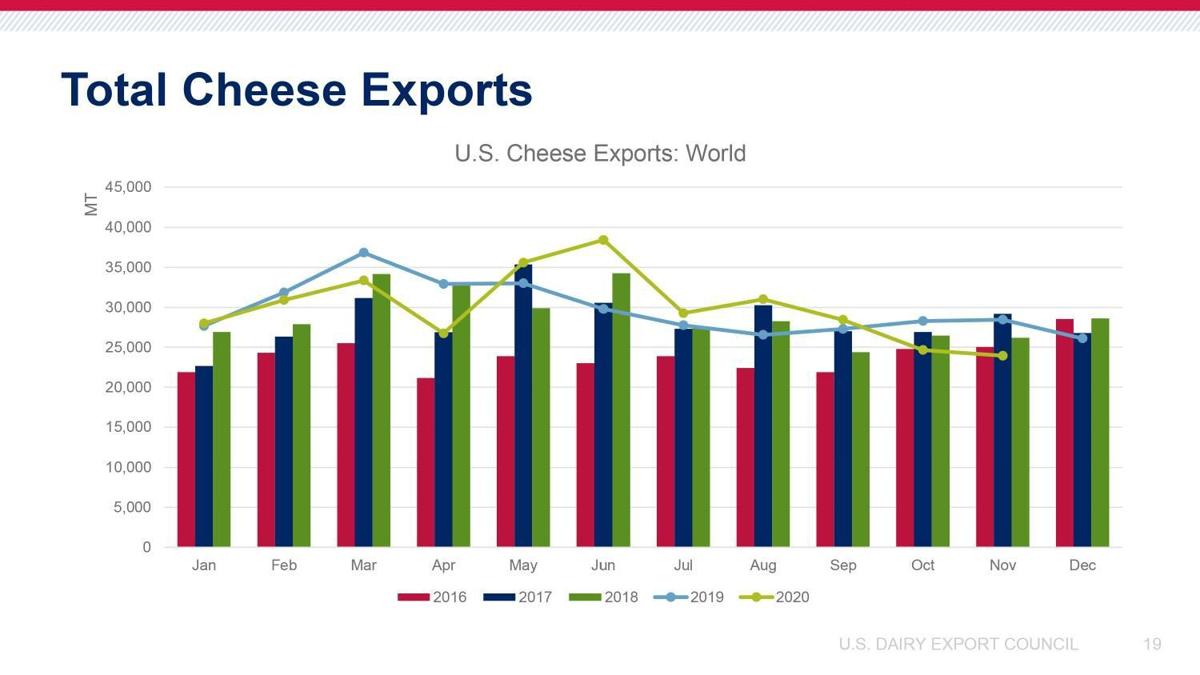 Looking ahead, more affordable U.S. cheese toward the end of 2020 should have been the signal for international buyers to buy U.S. product, particularly in Mexico. As a result exports should rebound. But with more price volatility on the way, volatility in export volumes may follow. 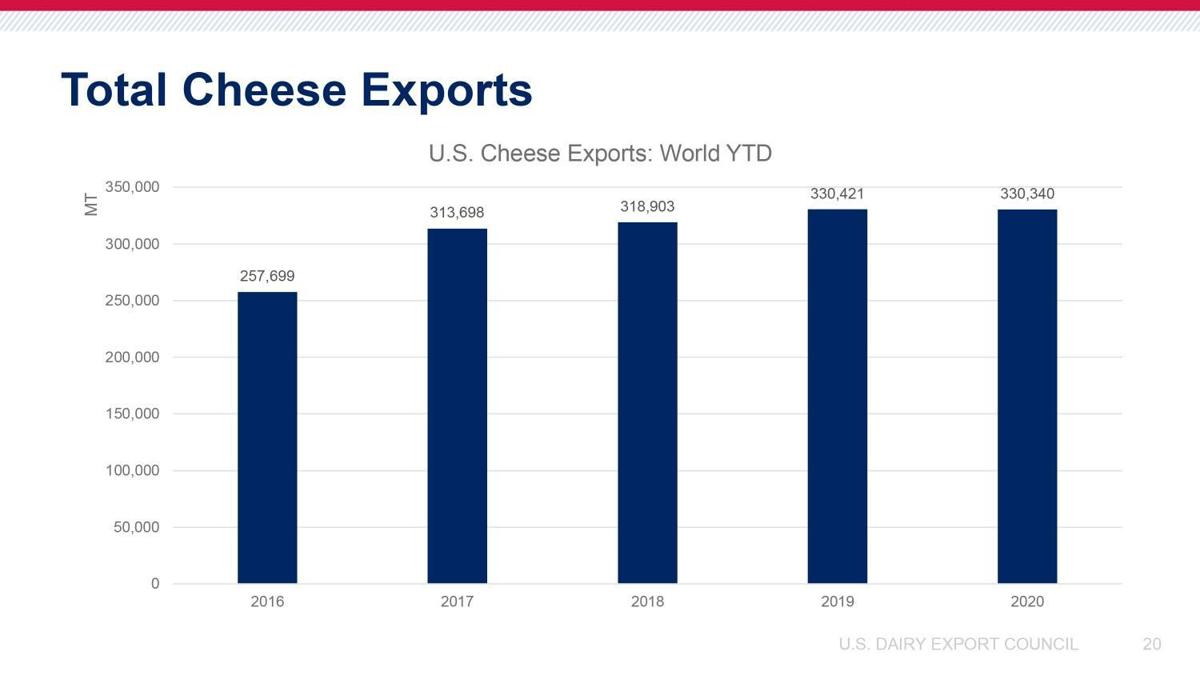 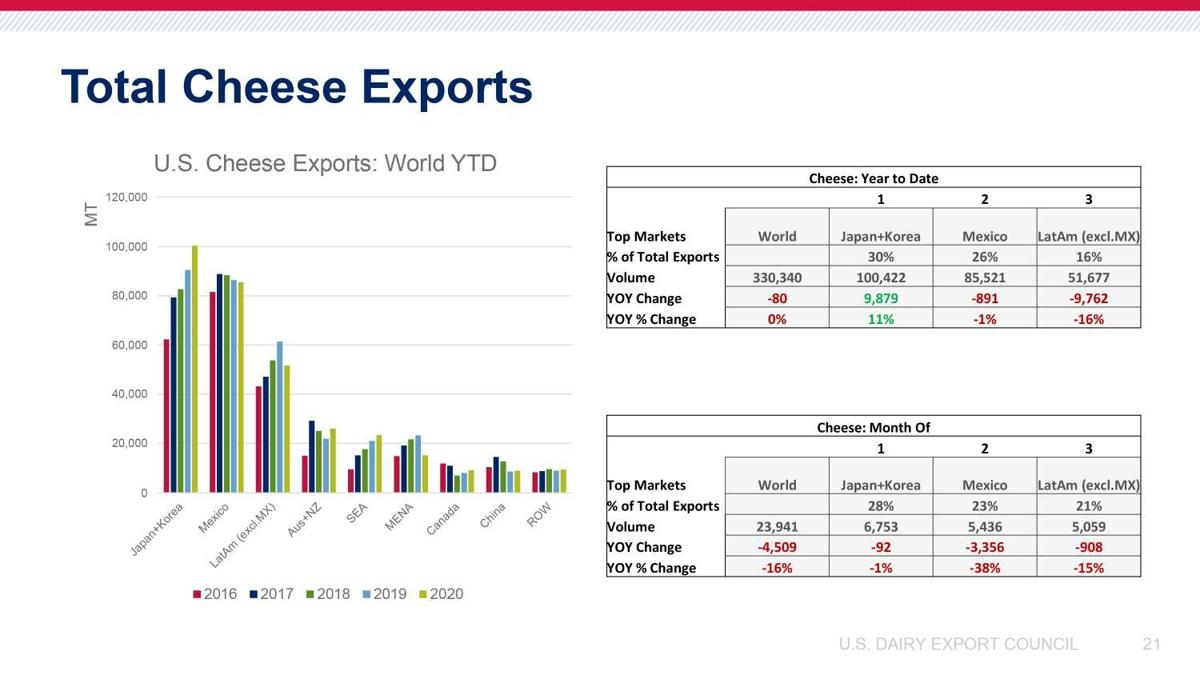 Let’s start off with some context. U.S. nonfat-dry-milk- and skim-milk-powder exports to Southeast Asia through November increased 50 percent compared to the same period the previous year – growth of more than 100,000 metric tons in 11 months. That acceleration was due primarily to a change in market share as the U.S. went from 31 percent of total Southeast Asian nonfat-dry-milk- and skim-milk-powder trade in 2019, to 46 percent on an annualized basis. So overall trade to the region was still very strong in 2020 despite November’s figures.

The question remains “Why?” and “Should we expect this to persist?”

As to why, there were likely multiple factors at play. A 46 percent share of trade for any supplier is well more than the norm in such a greatly competitive region, with European, New Zealand and Australian suppliers all focused on gaining business. Thus some regression in market share or volumes was to be expected.

And November was the strongest month of growth in 2019 so if volumes were to decrease from year-over-year levels, November would be the most likely candidate. October’s volumes were buoyed by record shipments to the Philippines, so it may just be a case that difference in shipping dates are causing some month-to-month declines.

The most relevant unknown, however, is whether demand in the region is slowing. Total nonfat-dry-milk- and skim-milk-powder trade to Southeast Asia accelerated sharply in the second and third quarters of 2020, increasing 16 percent from the same period in 2019. After total trade to the region declined 0.6 percent in October despite U.S. volumes increasing, a decrease in U.S. exports in November likely presages of a decrease in global nonfat-dry-milk- and skim-milk-powder trade to Southeast Asia for the month as well. European export figures will clarify that, but for now it’s something to monitor.

Looking ahead we will be watching closely what happens with Southeast Asian demand. But U.S. exports to the region going into 2021 should remain much closer to the record-breaking levels we saw in 2020 rather than the preceding era, given the growing U.S. presence in the region, price competitiveness and product availability going into a strong spring flush. 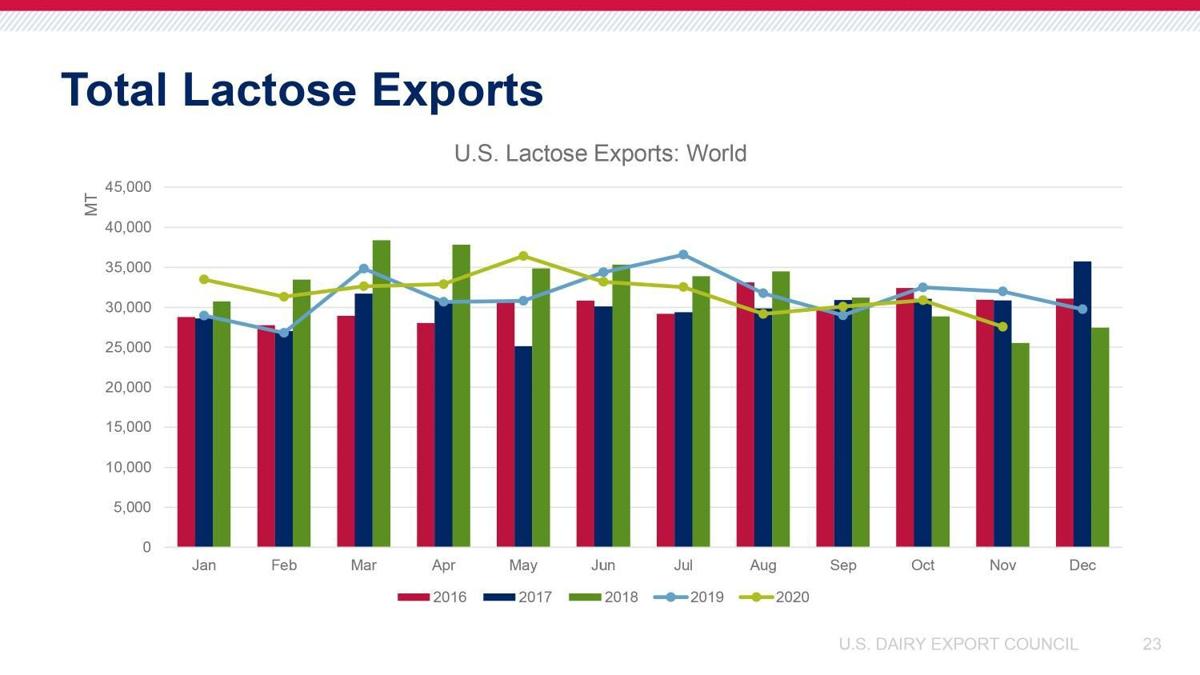 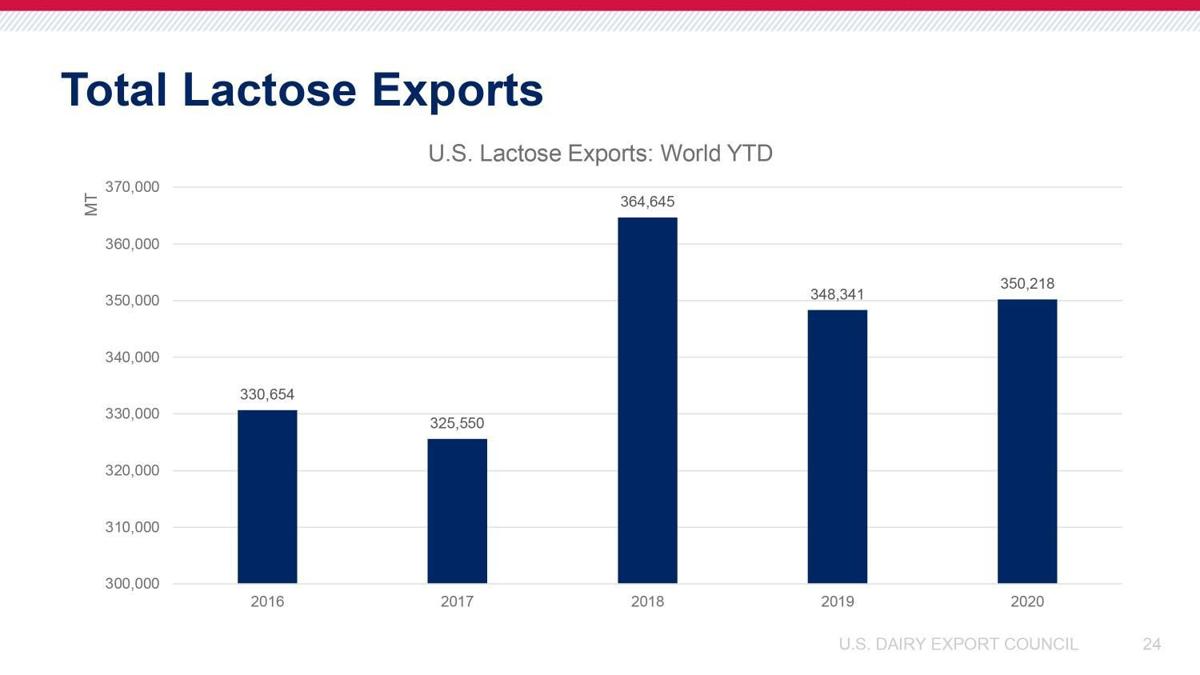 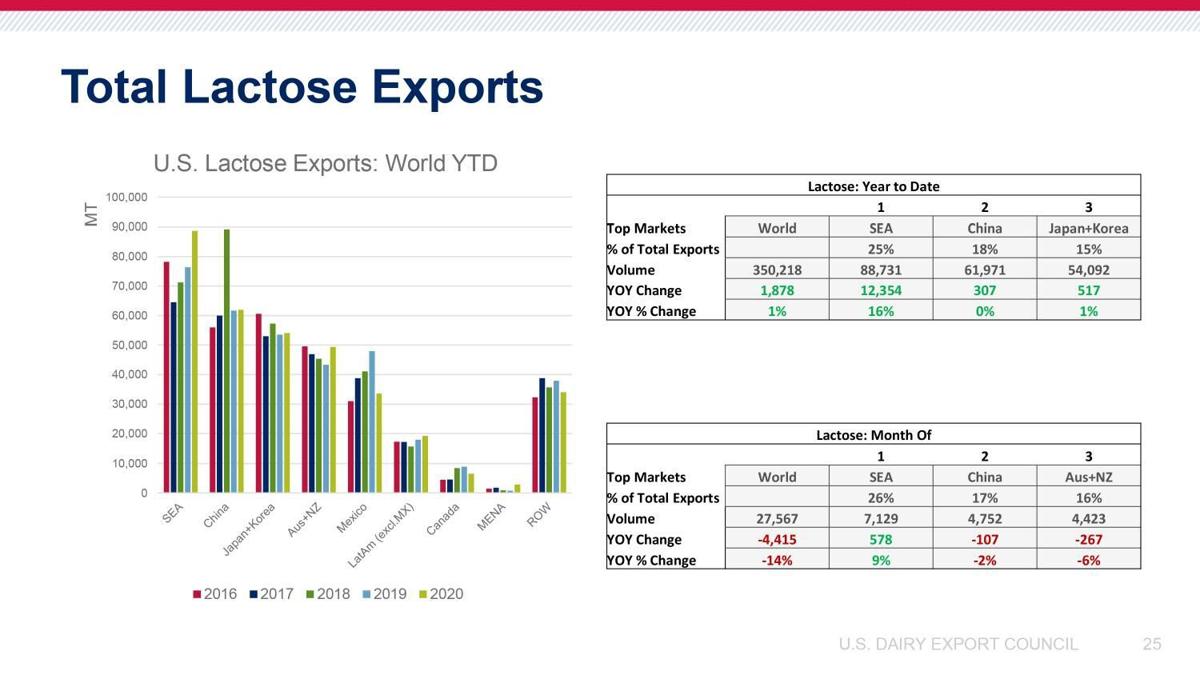 The year 2020 continued until its end to bring turbulent headwinds to dairy demand, which the industry has survived with heightened government…