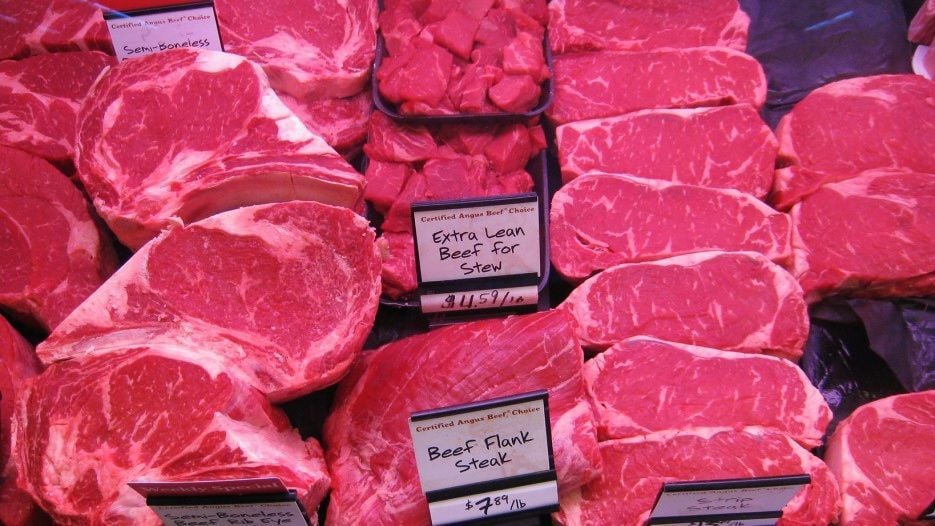 The livestock story has shifted to one of potential oversupply, soft demand and a relative return to normal in terms of the volume of product moving through the system. 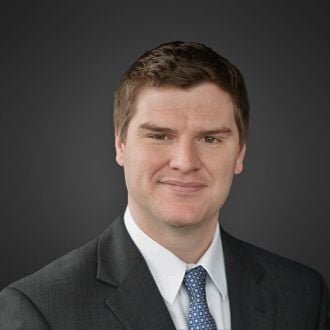 The livestock story has shifted to one of potential oversupply, soft demand and a relative return to normal in terms of the volume of product moving through the system.

But it wasn’t that long ago that consumers were emptying grocery-store shelves and processing facilities were closing due to labor and COVID-19 issues. That led to daily dire predictions of meat shortages in the United States.

The self-distancing and quarantine protocols put in place to slow the spread of COVID-19 reduced economic growth, shuttered consumers in their homes, and changed the way Americans purchase and consume food. Food production was significantly disrupted, especially at livestock-processing facilities where labor shortages and worker-protection measures slowed throughput at plants around the country. Some facilities closed their doors.

Now just a few short months later the story has shifted to one of potential oversupply, soft demand and a relative return to normal in terms of the volume of product moving through the system.

Due to COVID-19-related labor issues, slaughter-facility capacity decreased sharply in April and May. At its worst in early May, cattle slaughter decreased 35 percent from 2019. Hog slaughter decreased 35 percent from the previous year. Slaughter capacity has largely recovered to almost-normal levels, more quickly than most in the industry anticipated. We are by no means out of the woods yet; we face a large backlog of animals in the system that will remain with us through at least the early fall.

Fed-cattle slaughter has settled at about 95 percent of full capacity. That may be the most the industry can accomplish given the measures put in place at facilities to combat the spread of COVID-19.

Hog slaughter has returned to levels more than 2019; it’s mostly in-line with its pre-COVID-19 trajectory. Maintaining those greater slaughter levels will be critical to working through the backlog of animals. That’s particularly true of the pork complex. Previous U.S. Department of Agriculture hog and pig reports indicate a larger volume of animals in the pipeline for later in the summer. That means there may not be much room at slaughter facilities to clear additional animals that are waiting. The breeding decisions that resulted in that larger volume were made long before the impacts of COVID-19 could be imagined. 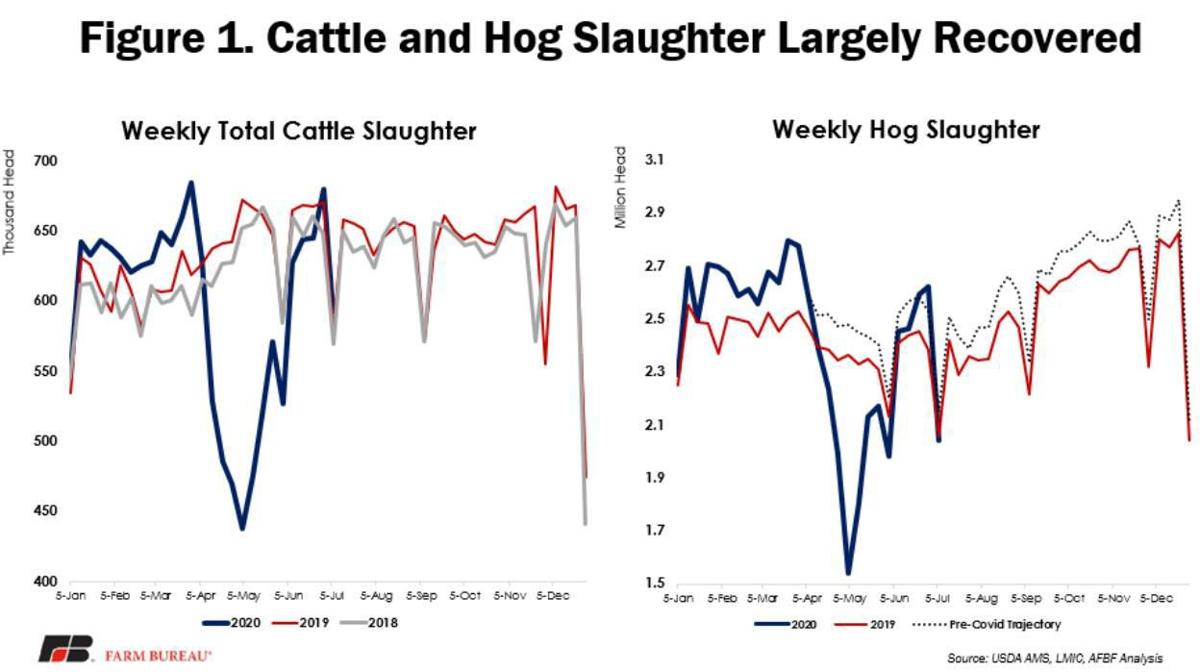 As the backlog of animals in the system forces producers to hold on to animals longer, they continue to gain weight before moving to slaughter. That’s resulted in an increase in live and dressed weights of animals in the supply chain, creating a problem with cattle-carcass weights. As evidenced in Figure 2, cattle-carcass weights tend to seasonally decline and bottom out in late spring. They then rebuild to a peak in October or November. This year carcass weights have mostly held steady throughout the summer because of the slowing of throughput at the plants the past few months, and the backlog of animals that created in the country’s feed yards. During the previous two months dressed-steer-carcass weights have averaged about 45 pounds more than 2019 weights. Those more-than-average carcass weights will likely be with us for several more months before returning to their normal pattern.

Hog-carcass weights have not been affected to the same degree as cattle, but we still have seen an increase in carcass weights for market hogs. The developments in animal weights leads us to our next point, the resulting increase in meat production. 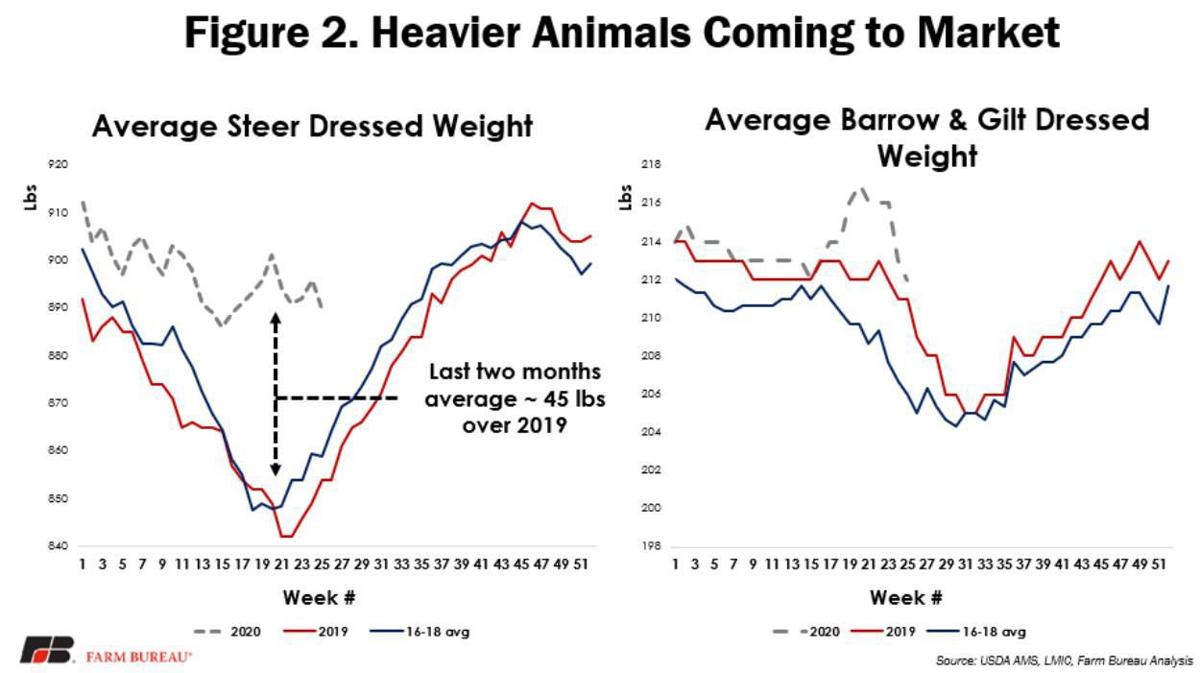 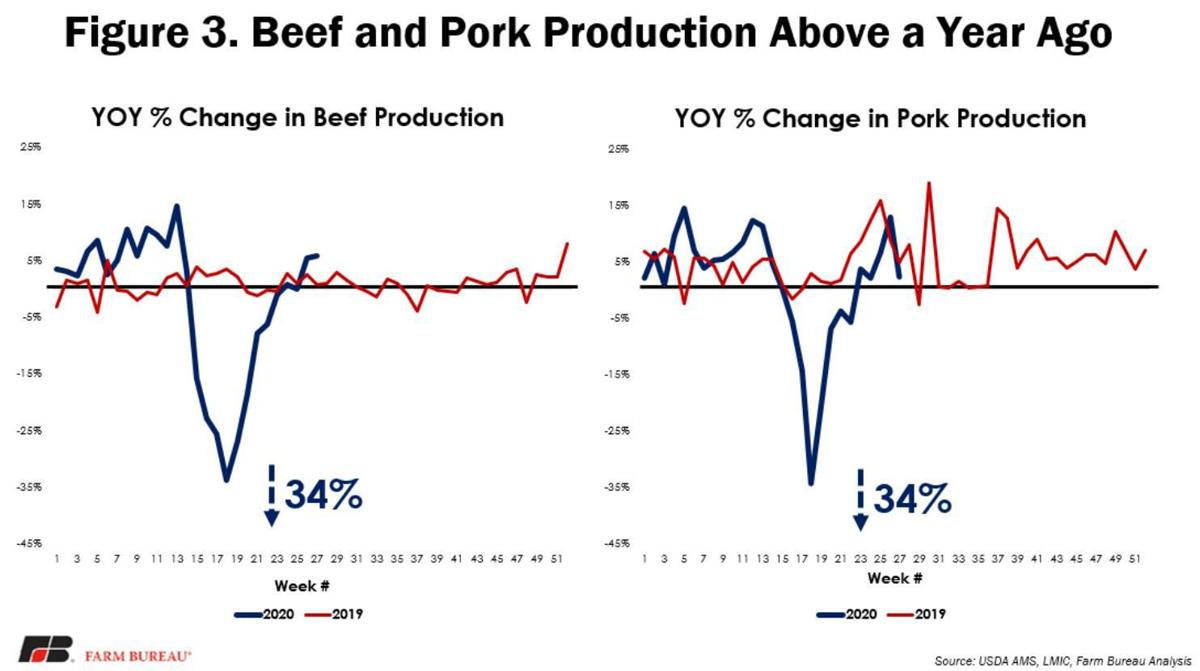 The conversation concerning the beef and pork complexes has largely shifted from a story of supply to a story of demand. Now that the Fourth of July has passed, one of the larger demand events of the summer for meat is behind us. Seasonally the next few months of summer tend to see slower beef and pork consumption and reduced prices than early summer when consumers, excited about warmer weather after winter, fire up their grills. But with many restaurants still closed and others reclosing around the country, greater-than-normal meat demand could occur at the retail sector as consumers continue to be stuck at home. With many food-service businesses forced to reclose due to spikes in COVID-19 infections, softer demand for middle meats – which are more exposed to the food-service and restaurant sectors – could continue through the summer. The reopening – or not – of schools and colleges this fall will also introduce uncertainty into institutional and food-service meat demand. Those institutions typically start procuring product for the fall in late summer, but the rising uncertainty about COVID-19 infections has injected more uncertainty into those demand channels.

The beef and pork complexes have considerably moderated from the extreme price swings and supply-chain disruptions that occurred throughout most of the past several months. The excessive carcass weights will continue to drive beef production greater, with levels exceeding where they were a year ago. But as we move into the fall we will likely see greater fed- and feeder-cattle prices as the incredibly light placements from this spring become slaughter-ready. Animals are still largely waiting in the system, but healthy margins in the processing sector will hopefully incentivize packers to attempt to aggressively pull animals through the system and work through the backlog.