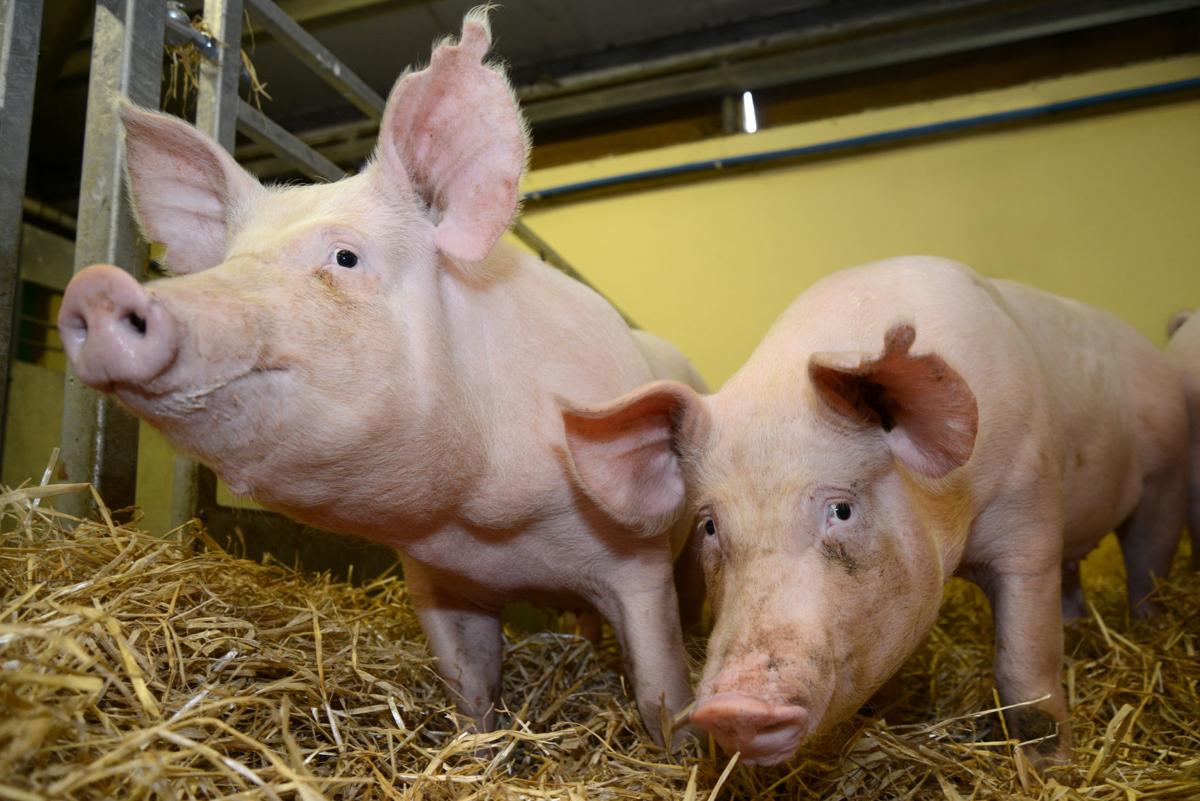 The U.S. Department of Agriculture’s December “Hogs and Pigs” report indicates producers continue to expand. The Dec. 1 inventory of all hogs and pigs came in at 77.338 million head, a record for the quarter and an increase of 3 percent from a year ago. 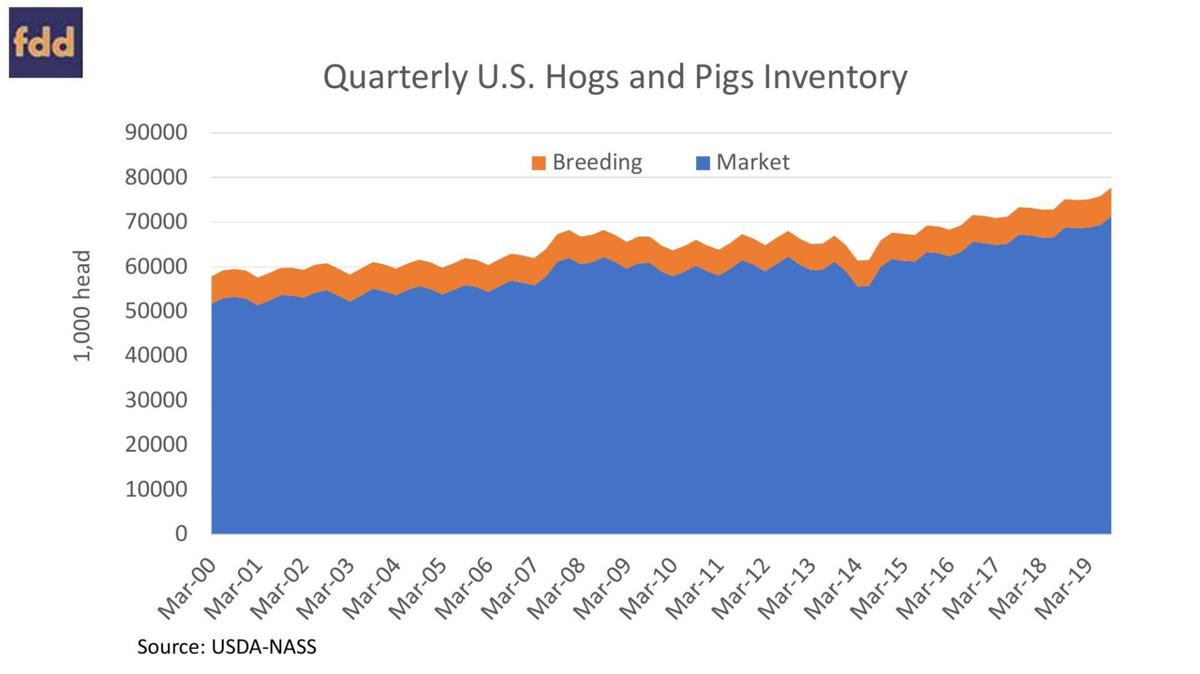 The U.S. hog industry has been expanding since mid-2014, with the annual breeding-herd growth rate peaking at about 3.5 percent in early 2018. Unprofitable margins and uncertainties from trade tariffs have slowed breeding-herd expansion. The USDA’s December report has breeding herds increasing by 2 percent and market herds increasing by 3 percent from the time the previous year. Those numbers are fairly in-line with pre-report expectations.

The number of pigs weighing less than 180 pounds was 2.25 percent larger than the inventory at this time a year ago. Those are the market hogs arriving at processing plants from January to May 2020.

The change reflects that the September-November pig crop increased 2 percent from 2018, despite 1 percent fewer sows farrowed during the period. The 2-percent-larger fall pig crop also implies about 2 percent more slaughter next spring.

The larger pig crop is due to a record of 11.09 pigs saved per litter, on average, or a little better than one pig per litter more than the previous year’s 10.76 for the September-November period. The 2019 average was 10.97 pigs per litter compared to 10.68 in 2018, continuing the trend with an average rate of annual increase of 1.3 percent during the past decade. 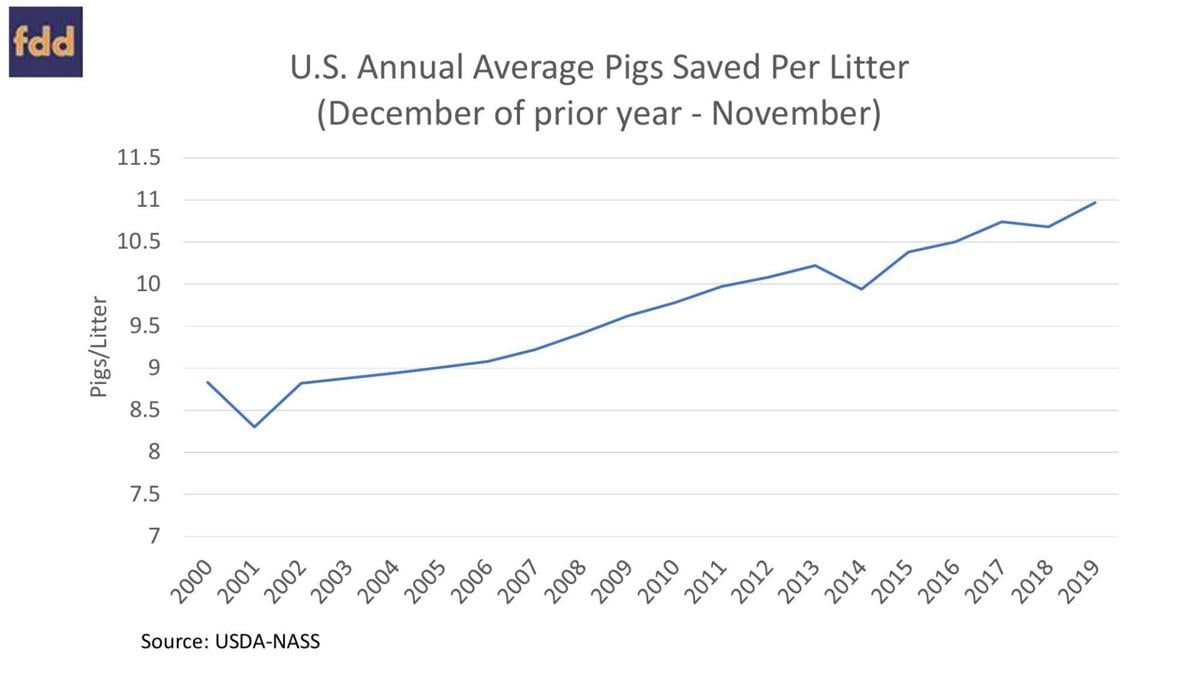 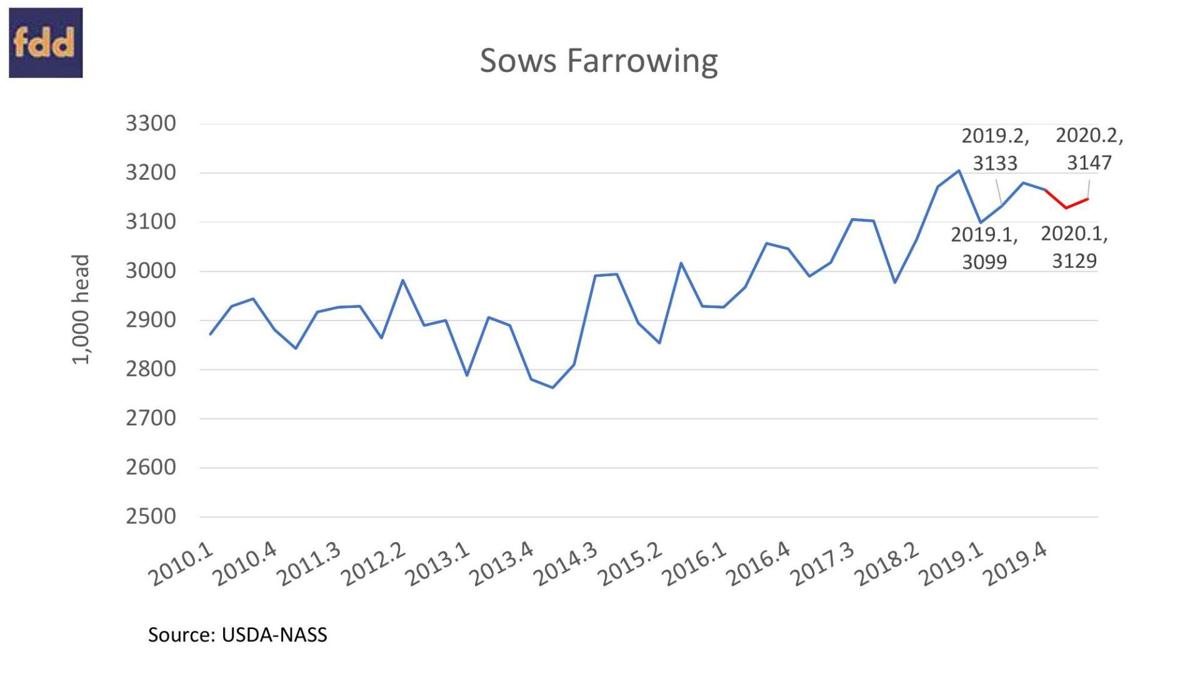 All those numbers point to a somewhat greater supply of hogs and pork in 2020. With greater production one might expect reduced prices, but there are additional items to consider on the demand side. 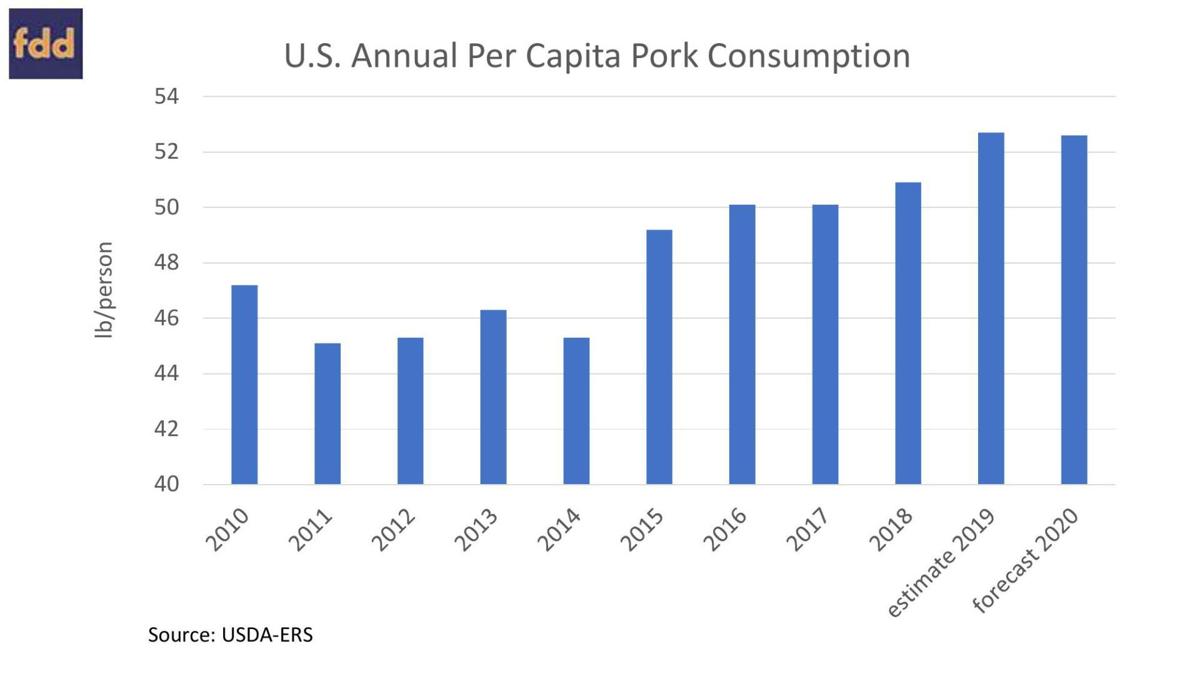 Pork production is expected to be 3.5 percent more in 2020, though consumption is expected to decline by just 0.1 pound per American. But we still have exports to consider. On the world market all eyes are on Asia, and China in particular, due to their production losses from African swine fever.

Although held back by China’s retaliatory duties, U.S. pork exports to China increased throughout 2019. China surpassed Japan in September and October to become the second-largest U.S. foreign customer, after Mexico. Mexico ceased a 20 percent retaliatory duty on U.S. pork late this past May; the duty had restrained exports through April. The U.S. House of Representatives approved the U.S.-Mexico-Canada Agreement in December. The Senate is expected to ratify it this year, which will help to ensure long-term duty-free access to that key market. 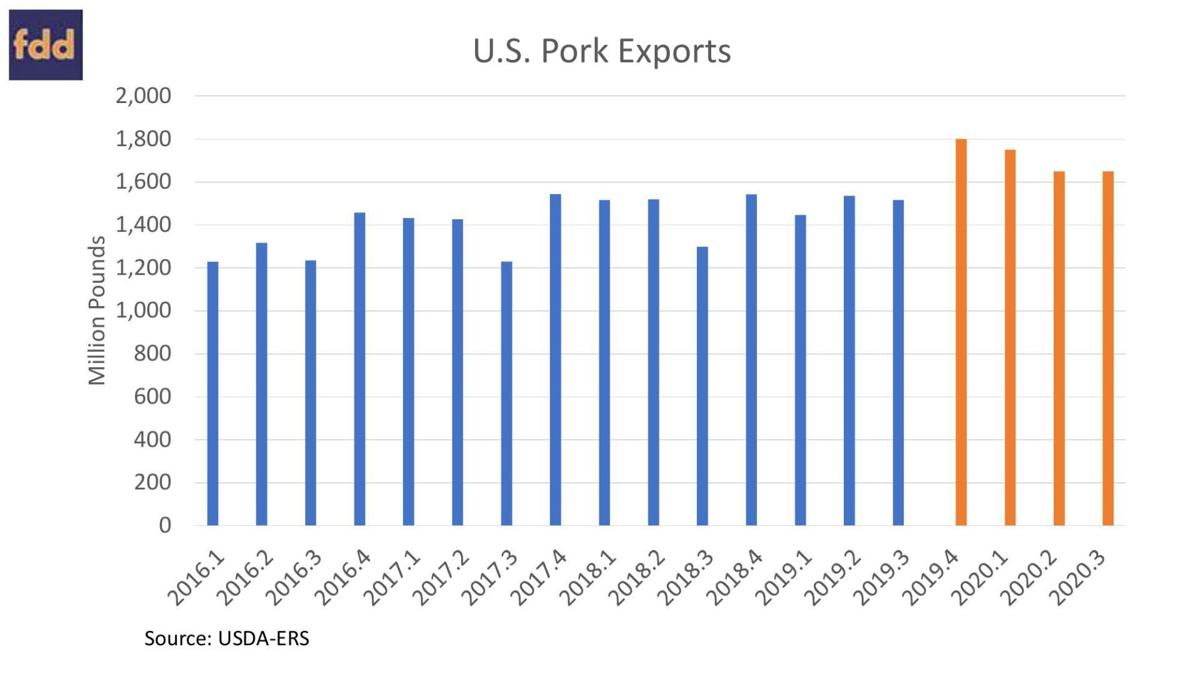 The USDA is forecasting U.S. pork exports in the first three quarters of 2020 to be 21 percent, 7.5 percent and 8.8 percent greater than the same time the previous year. Those forecasts are premised on the assumption that China and other Asian countries will continue to face significant domestic-pork-supply deficits, and that the preliminary trade agreement with China will eventually be finalized.

Taking all of that into account, hog prices should be profitable throughout much of 2020. That’s even though they have been at less than the cost of production in recent weeks – as they often are seasonally this time of year. 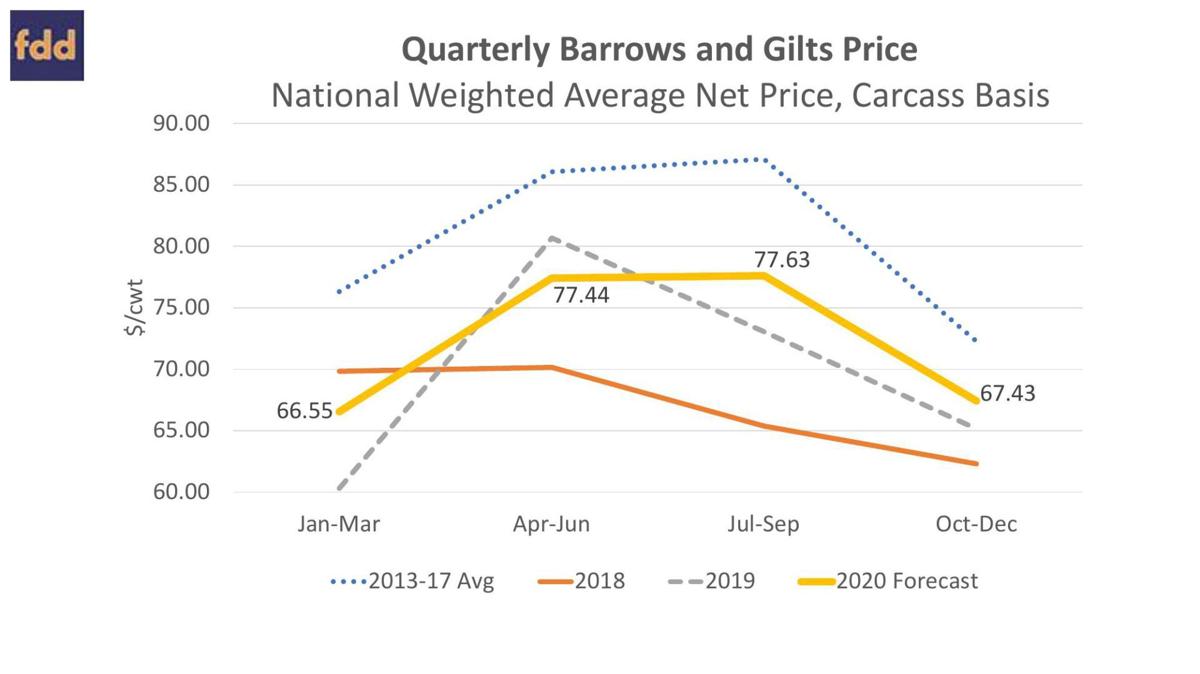 In other forecasts a base price might be reported on either a live or carcass basis. But the forecast presented here is for the national weighted-average net price for all transactions for producer-sold barrows and gilts, including negotiated and contract prices. That net price should be more reflective of what producers receive. It runs at a premium of more than $2 per hundredweight more than the base price on average, so take that into account if comparing to other forecasts.

By quarter the national net price is expected to average about $66 in the first quarter, $77 in the second and the third quarters, and then $67 in the final quarter of 2020. A range of $2 more or less would be reasonable for price projections. Given costs of production in the low- to mid-$60s, hog prices should be profitable on average throughout 2020.

Those projections are based on a scenario where growth in domestic and export pork demand more than offsets growth in U.S. hog production, as previously described. Because domestic production and consumption tend to be relatively easier to have a handle on, export demand from China in particular appears to be the wildcard. If the expected growth in U.S. pork exports to China doesn’t materialize, then U.S. hog prices would likely fall short of those projections.

Jason Franken is an agricultural economist at Western Illinois University.