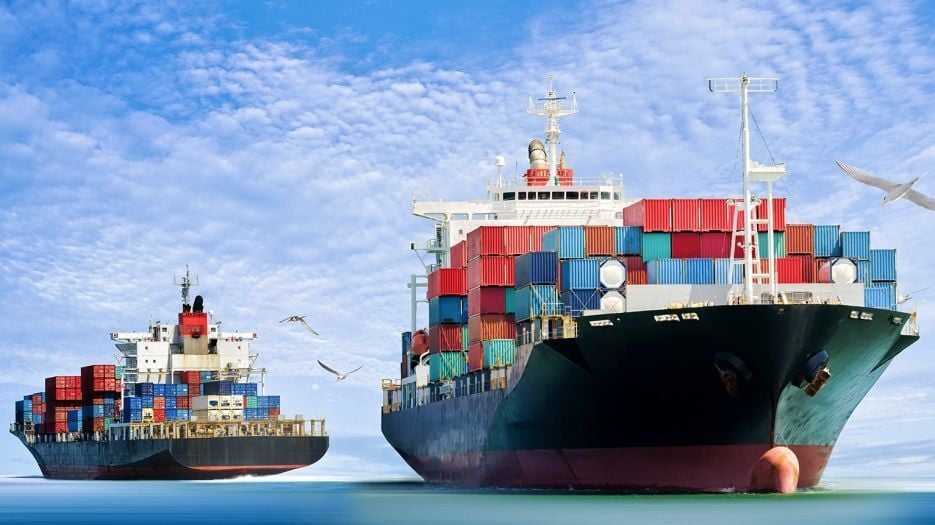 Meat exports continue to expand due to increased demand.

Fueled by impressive growth in a wide range of destinations, U.S. beef- and pork-export values shattered previous records in May, according to data released by the U.S. Department of Agriculture and compiled by the U.S. Meat Export Federation. Beef exports also reached a new volume record in May. Pork-export volume was the third-largest on record.

The outstanding May performance is especially gratifying when we consider where red-meat exports stood a year ago. The industry faced unprecedented COVID-related obstacles at all levels of the supply chain, and an uncertain international business climate. Those challenges are still not behind us, but international demand has been resilient. And the U.S. industry has shown a tremendous commitment to serving its global customers.

But U.S. labor availability remains a major concern and limitation for the industry, and exporters continue to face significant obstacles when shipping product overseas. Due to the ongoing fluid impact of COVID-19, food-service restrictions continue to affect several key markets where dine-in service is either suspended or subject to capacity limits and shorter hours. And tourism has not yet returned in many countries.

The U.S. Meat Export Federation remains optimistic that international demand will remain strong in the second half of 2021, but the road ahead is not an easy one. The U.S. industry must continue to be innovative and aggressive in defending existing market share. The industry must also expand its customer base by responding to COVID-driven changes in the marketplace as well as shifts in consumer trends and preferences. 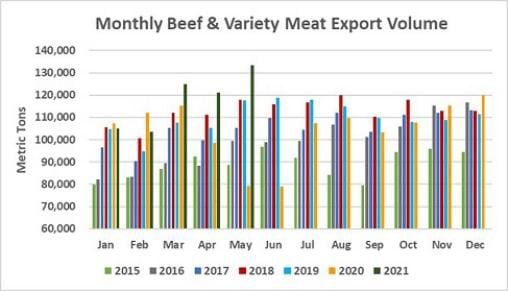 May pork exports totaled 283,617 metric tons, an increase of 16 percent from a year ago and the third-largest on record – trailing only March 2021 and March 2020. Export value exceeded $800 million for the first time in May, climbing 31 percent to $813.2 million. For January through May, pork exports were slightly less than the previous year’s record pace at 1.34 million metric tons – a decrease of 1 percent. But export value increased 3 percent to $3.63 billion. 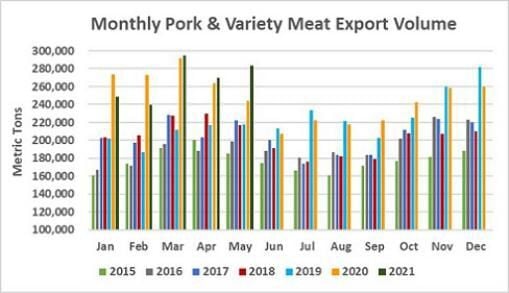 Beef-export value equated to $433.18 per head of fed slaughter in May, an increase of 53 percent from a year ago and breaking the previous record by more than $65. The January-May average was $361.29 per head, an increase of 13 percent. Exports accounted for 17.6 percent of total May beef production and 14.9 percent for muscle cuts only. That was a dramatic increase from the year-ago ratios of 12.5 percent and 10.5 percent. January-May exports accounted for 15 percent of total production and 12.6 percent for muscle cuts, each about one full percentage point more than a year ago.

May exports to Japan, the No. 1 volume destination for U.S. beef, rebounded to 30,721 – an increase of 54 percent from a year ago. It was valued at $208.3 million, an increase of 71 percent. Exports were impacted in April by an increased safeguard tariff rate, which Japan imposed for 30 days. But in mid-April the safeguard rate expired and U.S. beef received its annual tariff reduction under the U.S.-Japan Trade Agreement. That put U.S. product back on a level playing field with major competitors, with beef-muscle cuts tariffed at 25 percent. Beef exports to Japan through May were still 2 percent less than the previous year at 131,423 metric tons, but export value increased 3 percent to $864.2 million.

Beef exports to China totaled 16,472 metric tons in May, only slightly trailing the April record. They were valued at $130.2 million. With expanded beef access to China in place for more than a year under the Phase One Economic and Trade Agreement, exports to the world’s largest beef-import market continue to climb. January-May exports to China reached 64,763 metric tons valued at $474.7 million – each an increase of about 1,200 percent year-over-year and already establishing new annual records. The United States is now the largest supplier of grain-fed beef to China and accounted for 4.4 percent of China’s total beef imports in the first five months of the year. 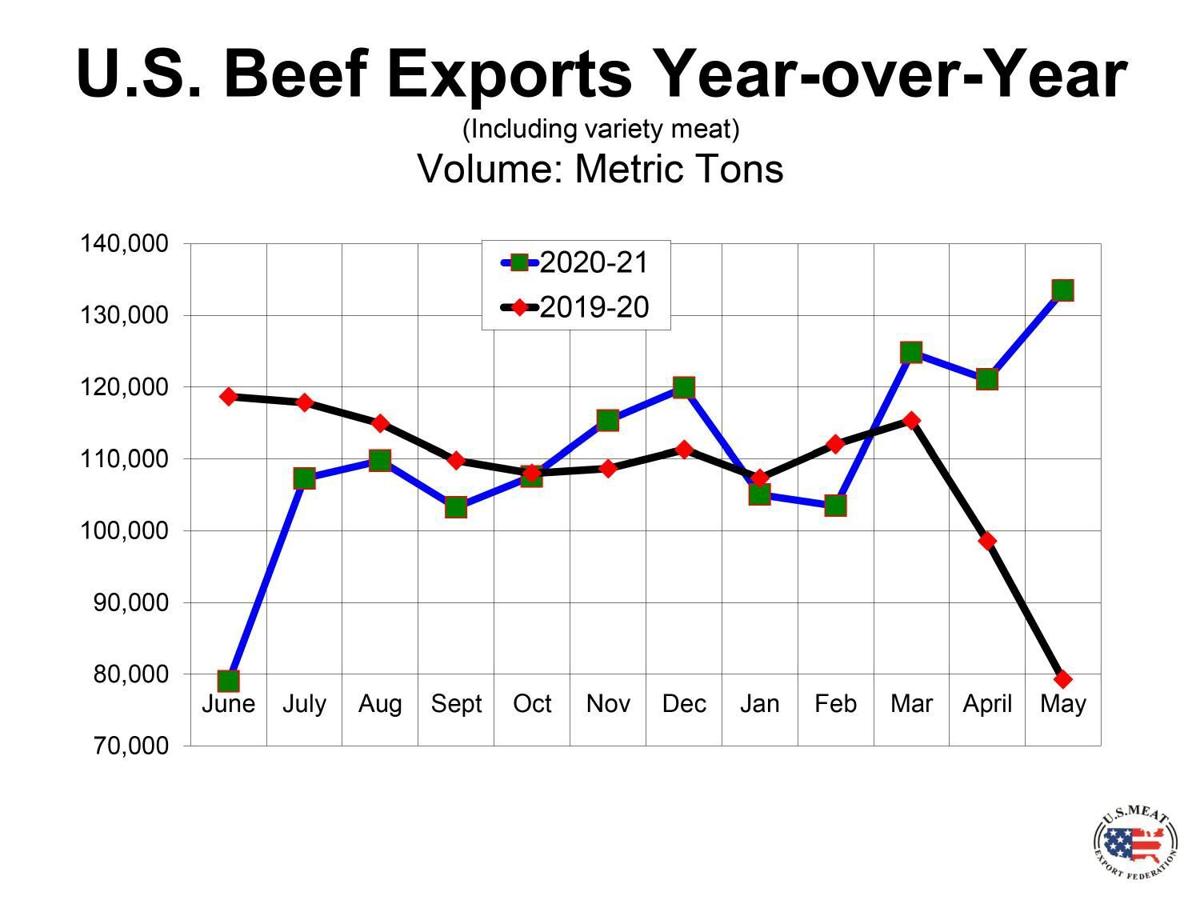 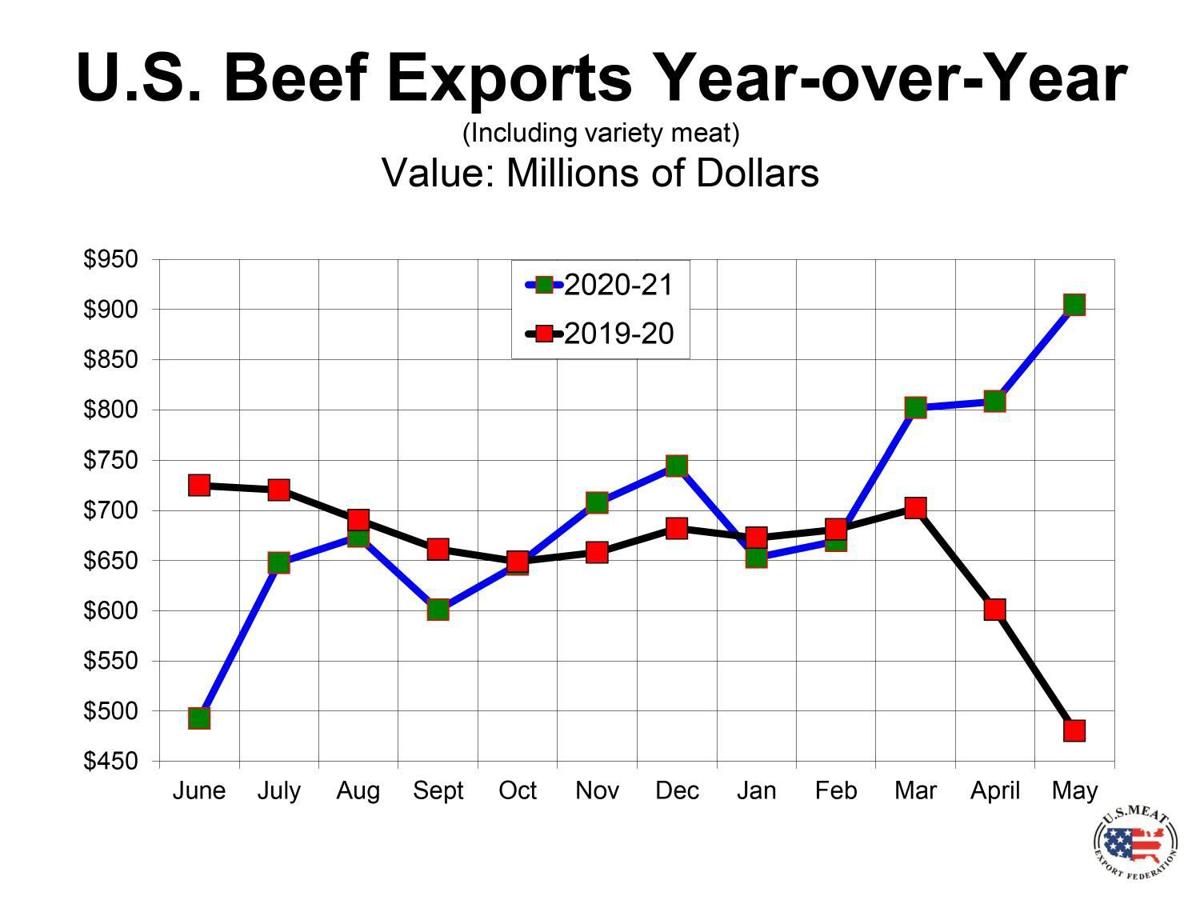 Decreasing by double digits in the first quarter, May exports of beef-variety meat trended more year-over-year for the second-consecutive month at 28,347 metric tons, an increase of 65 percent and the largest since 2019. May export value was $91.3 million, an increase of 72 percent and the third-most on record. While the variety-meat capture rate continues to be challenged by labor availability at the plant level, demand is strong in Latin America and Southeast Asia. Beef-tongue and other variety-meat exports to Japan also trended more and liver exports to Egypt rebounded. Beef-variety-meat exports through May were 6 percent ahead of the previous year’s pace at 125,175 metric tons, valued at $396.8 million for an increase of 7 percent.

Pork-export value per head slaughtered averaged $77.64 in May, an increase of 7 percent from a year ago. Through May the per-head average was $66.16 for a decrease of 2 percent. Exports accounted for 38.1 percent of total May pork production, an increase of almost 2 percentage points from a year ago. The share of muscle cuts exported was 33.8 percent, an increase from 33.3 percent. January-May exports accounted for 31.8 percent of total pork production and 28.6 percent of muscle cuts, compared to 33 percent and 30 percent, respectively, for the same period in 2020. That was sharply more than the 2019 ratios of 25 percent and 22 percent. 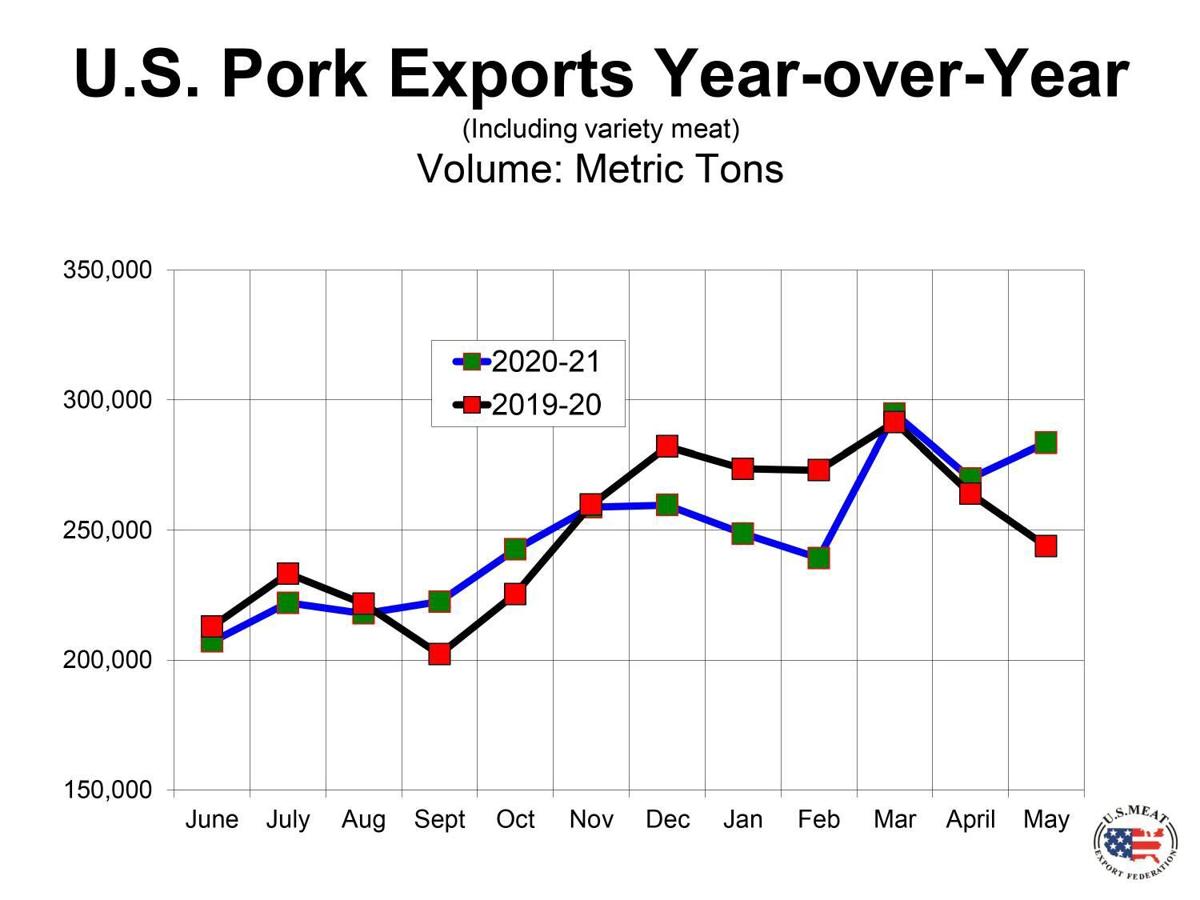 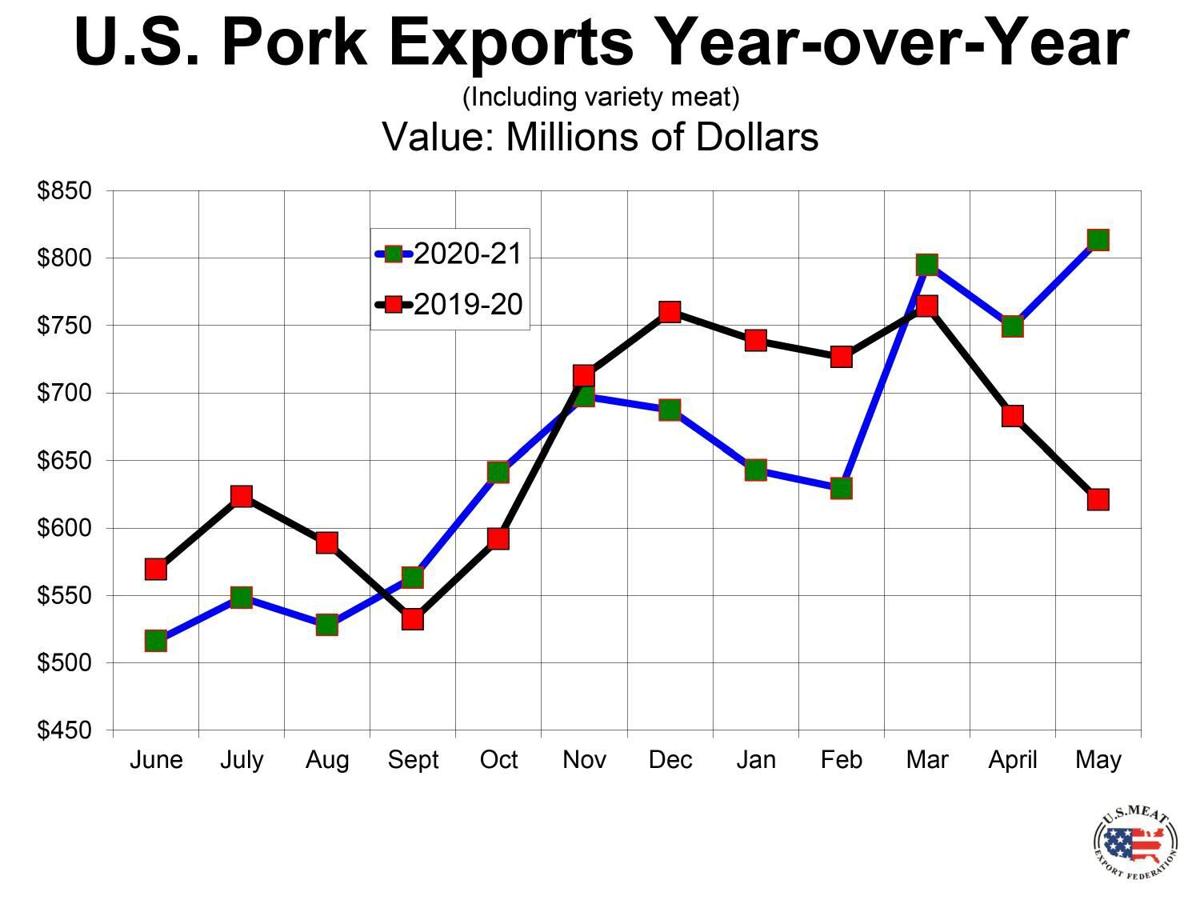 Led by larger shipments to Mexico and the Caribbean, May exports of U.S. lamb were the most of the year at 1,377 metric tons for an increase of 43 percent from a year ago, valued at $1.82 million for an increase of 67 percent. Through May exports were 53 percent more than the previous year’s pace at 5,733 metric tons, with value increasing 16 percent to $7.43 million. While variety-meat demand from Mexico accounted for most of the export volume growth for U.S. lamb, muscle-cut shipments also increased to Mexico, Canada, Bermuda, and Trinidad and Tobago. 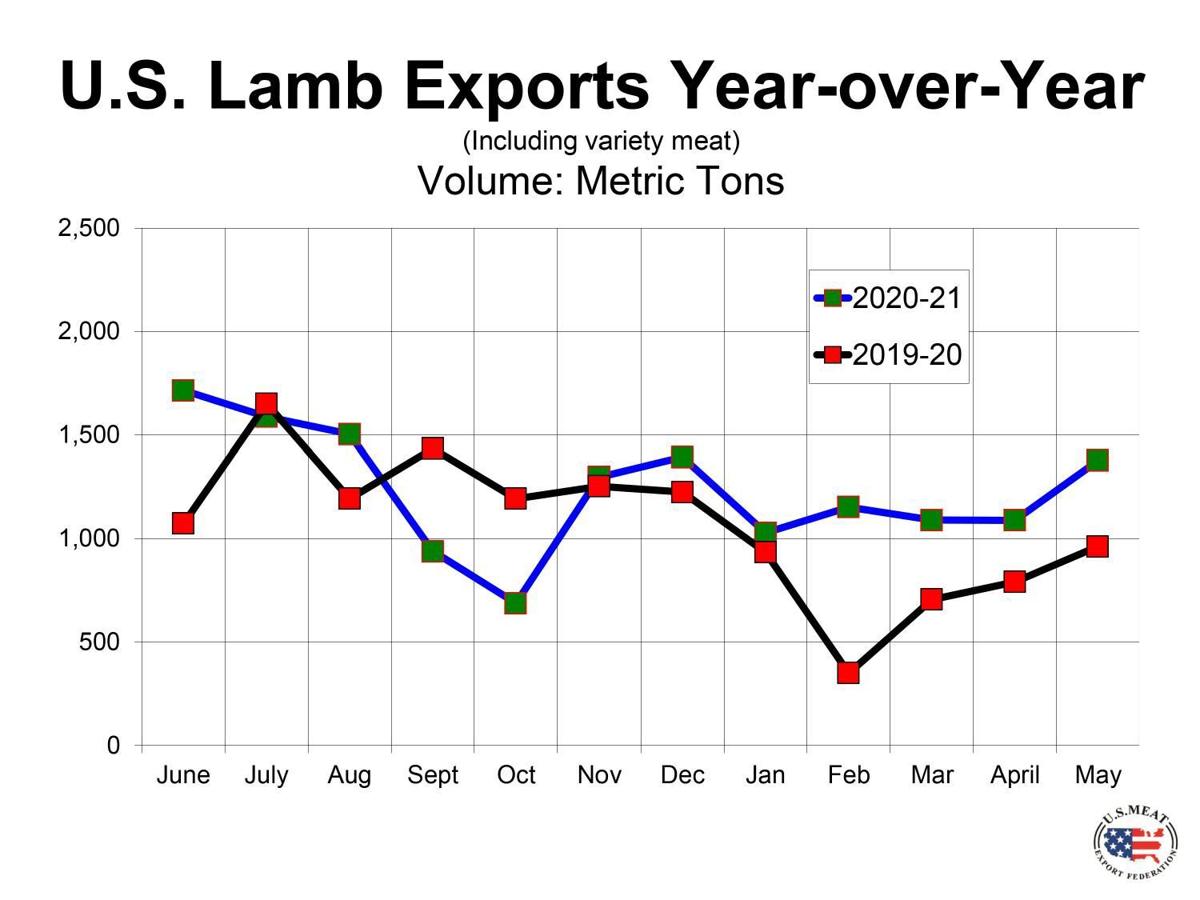 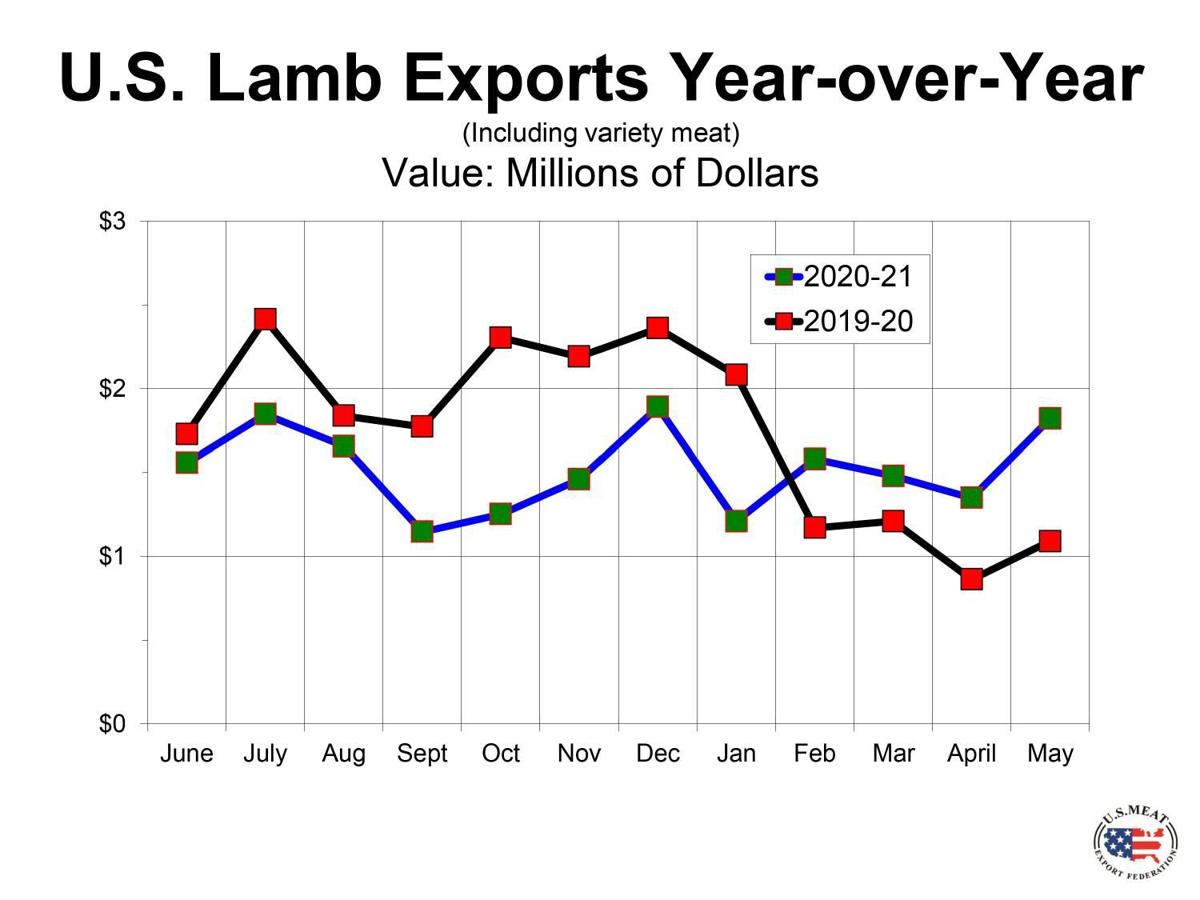 Dan Halstrom is the president and CEO of the U.S. Meat Export Federation.

Meat exports continue to expand due to increased demand. 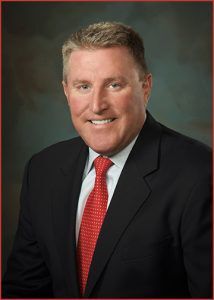