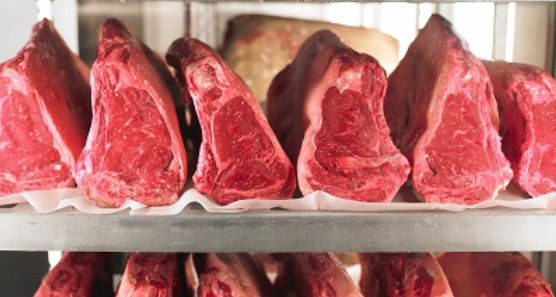 Meat exports achieved growth in a broad range of markets in 2020.

U.S. pork exports reached almost 3 million metric tons in 2020, topping the 2019 record by 11 percent according to data released by the U.S. Department of Agriculture and compiled by the U.S. Meat Export Federation. Pork-export value also climbed 11 percent to a record $7.71 billion. U.S. beef exports finished 2020 less year-over-year, decreasing 5 percent in both volume at 1.25 million metric tons and value at $7.65 billion. But beef exports finished the year with very strong momentum, with fourth-quarter volume increasing 4.5 percent from 2019 and posting one of the best months on record in December.

“Obviously the surge in demand from China, especially in the first half of 2020, was a driving force behind the record performance for U.S. pork exports,” said Dan Halstrom, U.S. Meat Export Federation president and CEO. “But China was not the only success story in 2020, as exports achieved growth in a broad range of markets. Diversifying export markets is a top priority for the U.S. Meat Export Federation and the U.S. industry. And that strategy paid dividends – especially in the fourth quarter, when exports to China-Hong Kong were down 9 percent from 2019 but shipments to the rest of the world almost offset that slowdown.”

Beef exports were heavily impacted by food-service restrictions in many major markets but increased late in the year, bolstered by strong retail and holiday demand.

“Consumers across the world responded to the COVID-19 pandemic by seeking high-quality products they could enjoy at home, and U.S. beef and pork definitely met this need,” Halstrom said. “We expect those retail and home-delivery demand trends to continue even as sit-down restaurant dining recovers, creating robust opportunities for U.S. red-meat export growth.”

Pork-export value equated to $59.87 per head slaughtered in December, a decrease of 10 percent from a year ago. But the full-year average of $58.65 per head was 10 percent more than 2019. December exports accounted for 28.8 percent of total pork production and 26.1 percent for muscle cuts, a decrease from the December 2019 ratios of 32.1 percent and 29.3 percent respectively. But for the full year, exports accounted for a significantly greater percentage of both total pork production – 29.3 percent from 26.9 percent – and muscle cuts – 26.5 percent from 23.6 percent.

December beef exports totaled 119,892 metric tons, an increase of 8 percent from December 2019 and the largest in almost 10 years. Export value was $744 million, an increase of 9 percent from a year ago and the second-best total on record – trailing only July 2018. December exports of beef-muscle cuts were the second-largest ever at 93,941 metric tons, climbing 11 percent year-over-year in both volume and value to $659.8 million. For 2020, beef-muscle-cut exports decreased 2 percent year-over-year at 976,953 metric tons and decreased 5 percent in value to $6.77 billion. 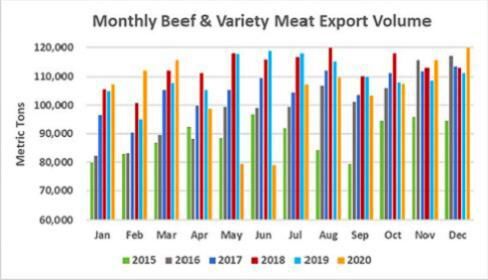 Pork exports to China-Hong Kong totaled 1.04 million metric tons in 2020, an increase of 56 percent from a year ago; value climbed 63 percent to $2.37 billion. Shipments to the region accounted for about one-third of total U.S. export volume, but that percentage declined later in the year as exports achieved more broad-based growth. The U.S. Meat Export Federation doesn’t expect 2021 exports to China-Hong Kong to match the levels posted during the past year, but the region will still have a strong need for imported pork.

Pork exports to Mexico finished less in both volume at 688,253 metric tons – a decrease of 3 percent – and value at $1.15 billion compared to 2019. But the market showed an impressive rebound late in the year. December exports increased 8 percent to 71,426 metric tons, the third-consecutive month of year-over-year volume growth.

Pork exports to Japan also gained momentum in the fourth quarter, increasing 12 percent, as the U.S. industry continued to capitalize on tariff relief provided in the U.S.-Japan Trade Agreement. Exports in 2020 to Japan finished 5 percent better than a year ago at 386,700 metric tons, with value increasing 6 percent to $1.63 billion. U.S. market share rebounded to 36 percent of Japan’s total pork imports, an increase from a low of 31 percent in 2019. 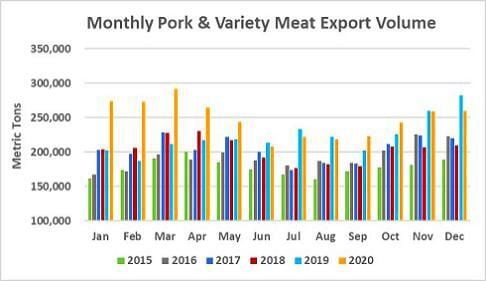 Led by strong growth in Honduras and Nicaragua, exports to Central America topped the previous record set in 2019 by 1 percent in both volume at 99,222 metric tons and value at $241.1 million. That marked the sixth-consecutive year for record pork exports to the region.

Pork exports to South America were substantially less in 2020, but Chile emerged as a bright spot with surging fourth-quarter demand. Exports to Chile finished the year 16 percent more at 49,828 metric tons, with value increasing 11 percent to $135.6 million. U.S. pork gained market share in Chile. Total imports were similar to 2019 but Chile’s exports surged, with more than 70 percent of its export volume bound for China. U.S. exports to Colombia, the regions’ largest destination for U.S. pork, declined sharply due to COVID-19 restrictions and a slumping Colombian peso. But demand showed strong signs of recovery late in the year and in early 2021.

Despite a slow start to the year, exports to the Philippines were 15 percent better in volume at 46,665 metric tons and jumped 24 percent in value at $115 million, finishing just short of the record levels of 2018. Exports to Vietnam were record-large at 25,183 metric tons, an increase of 82 percent with value almost tripling to $54.4 million. It was also a record year for the ASEAN region, with exports increasing 28 percent in volume at 77,149 metric tons and 43 percent in value at $186.3 million.

Strong demand in the Dominican Republic as well as Trinidad and Tobago pushed exports to the Caribbean 10 percent more in volume at 57,353 metric tons and 5 percent more in value at $136.8 million. Trinidad and Tobago is the region’s top destination for pork-variety meats, with 2020 exports climbing 58 percent to a record 1,736 metric tons, valued at $3.1 million – an increase of 72 percent.

Demand for U.S. beef exports proved resilient in most Asian markets in 2020, though with substantial shifts from food service to retail in some destinations. The limited labor situation challenged exports of certain items, especially variety meats, although December exports of beef-variety meats were the largest since March.

Exports to leading-market Japan slipped 2 percent year-over-year to 306,140 metric tons, with value holding steady at $1.94 billion. Beef-muscle-cut exports to Japan climbed 5 percent to 259,412 metric tons, with value increasing 1 percent to $1.57 billion. U.S. beef regained market share in Japan, climbing from 41 percent in 2019 to 44 percent in 2020, benefiting from the duty reductions in the U.S.-Japan Trade Agreement.

The U.S.-China “Phase One” Economic and Trade Agreement took effect in March, making beef from a much larger percentage of U.S. cattle eligible for the rapidly growing Chinese market. The U.S. industry capitalized in a big way, with exports quadrupling year-over-year to a record 42,813 metric tons, valued at $310.2 million – an increase of 260 percent. Since September the United States has surpassed Australia as the largest supplier of grain-beef to China.

Africa continued to emerge as a growing destination for beef-variety meats, led by strong demand in South Africa, Gabon, Cote d’Ivoire and Ethiopia. Variety-meat exports to the region increased 35 percent to 26,450 metric tons, valued at $20.1 million – an increase of 32 percent.

Meat exports achieved growth in a broad range of markets in 2020.