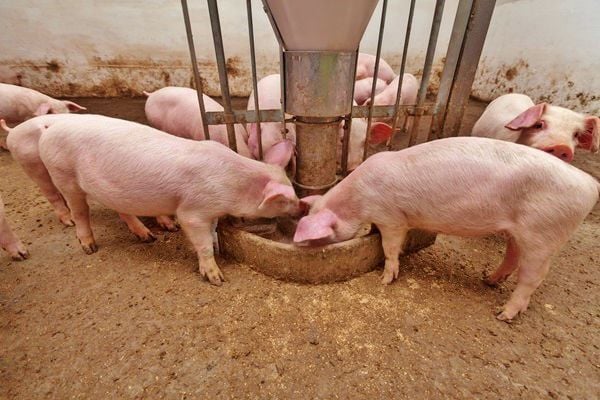 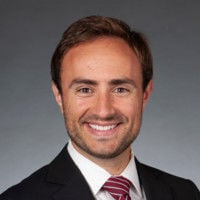 The U.S. pork industry has built multiple new plants during the past four years, increasing U.S. packing capacity by 12 percent, with much of the new capacity destined for international markets. As processing capacity has expanded so has production.

Compared to 2016, the U.S. Department of Agriculture’s September 2020 Quarterly Hogs and Pigs report reflected a breeding herd 5 percent larger and an inventory of market hogs 11 percent larger. If there was ever an example of a “if you build it, they will come” strategy, it’s the U.S. pork sector in recent years. International customers have bought more U.S. pork than ever before, allowing the industry to set export records each year since 2016. As the U.S. pork sector has grown, so have exports driven by shipments to China – especially this year.

By our math, two-thirds of industry growth since 2016 is being shipped to Greater China. China’s strong demand and overall export growth has kept domestic availability of pork relatively tight. Per capita consumption in the U.S. increased just 2 percent since 2016. 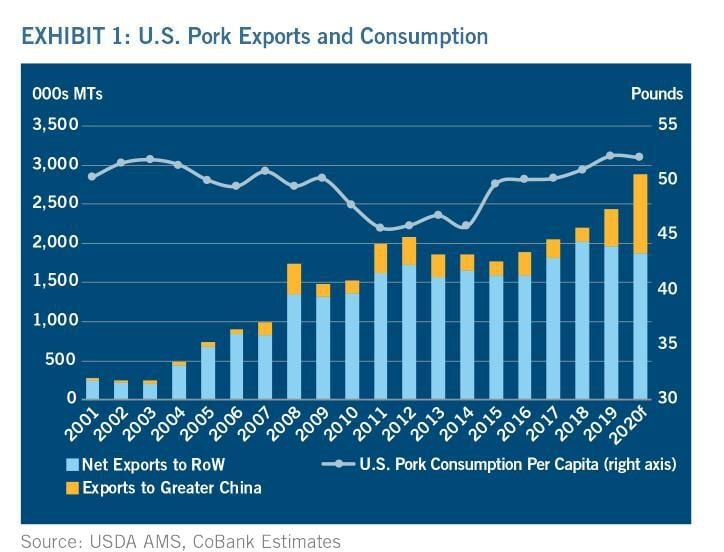 But the export growth has made the U.S. pork industry more reliant on Chinese demand. The Greater China region now accounts for one-third of all U.S. pork exports and almost 8 percent of U.S. pork production.

African swine fever was discovered in September in Germany, initially in a single wild boar on the border with Poland. Since then the disease has been found in dozens of wild boars; the virus can quickly become endemic in wild-boar populations as we have seen in Eastern Europe and China.

More significant for global trade, many key pork-importing countries have banned German pork. That opens the window for increased shipments from the United States and other key pork exporters. It gives the United States a short-term opportunity to increase market share in China because Germany represents about 14 percent of China’s pork imports. The ban may not last forever. And with China’s hog prices showing signs of weakening, the United States may still feel the pressure of reduced Chinese pork imports. 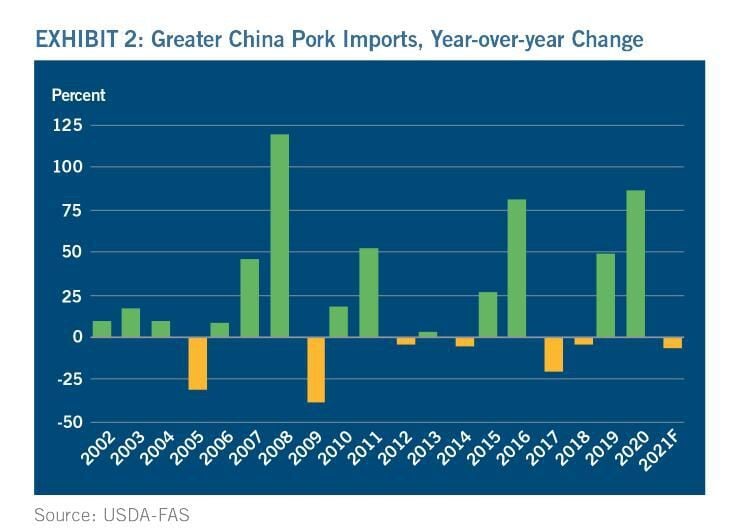 The environment for supply and demand for pork in China has always been difficult to pinpoint for numerous reasons. But the spread of African swine fever through China’s hog herd has made it even more difficult. We do know the virus claimed more than half of China’s hog herd during the past two years and has driven China’s hog prices to records. Those record prices have held for almost a year, other than a brief decline in April and May due to COVID-19. But China’s supply growth appears since July to be driving the decline in prices.

Official Chinese government data indicates growth in their hog herd and breeding herd versus prior-year levels. Some market participants look at those numbers with skepticism but we are starting to see the “green shoots” of the rebuilding of China’s hog herd. Those signs include billions of dollars of Chinese investments in large-scale production during the past couple of years, diminishing national and provincial subsidies and incentives for hog producers. Hog prices have decreased almost 25 percent in the past three months.

Unlike previous hog cycles in China when pork imports decreased almost as quickly as they increased, the impact of African swine fever may mean China’s imports will decrease far more slowly. African swine fever has been known to linger in hog herds for decades, stunting the local industry’s ability to fully recover. The disease will likely remain an issue in China’s hog industry for years if not decades. But the financial incentive to expand production is quite compelling because producer margins in China have averaged hundreds of dollars per head for months now. A flood of investment is building massive production facilities with greatly increased levels of biosecurity to help keep out African swine fever.

The year 2020 has been one of the most challenging years for the U.S. animal-protein sector, including the pork industry. The COVID-19 pandemic temporarily closed almost half of U.S. pork-processing capacity and drove a rapid shift in U.S. food consumption from restaurants to homes. In the midst of that domestic-market volatility, U.S. pork exports have skyrocketed, driven by massive shipments to China. To put it in perspective, U.S. shipments to Greater China accounted for about 2 percent of U.S. pork production in 2018. Just two years later Greater China accounts for almost 8 percent. That growth in exports has more than offset the rapid growth in U.S. pork production and processing capacity during that time.

Those strong trade flows may not last forever because we’re beginning to see those “green shoots” of expansion in China’s hog herd and the early signs of reduced hog prices. China’s hog prices returning to Earth has signaled a decline in China’s pork imports in previous hog cycles – whether that be in 2008, 2011 or 2016. Each time U.S. pork exports to China decreased in the years following the peak in prices. Reducing trade flows with China to pre-African swine fever levels would bring a good deal of stress to the U.S. pork sector.

But there are strategies and changes the pork industry can make now to help dampen that impact.

Shift the trade relationship from transactional to strategic. While we don’t expect China to change overnight from being an opportunistic buyer of animal proteins, we do see avenues for U.S. packers to strengthen relationships they have with the importers and customers of their end products. Russia in 2001 accounted for a similar proportion of U.S. chicken exports as Greater China accounts for U.S. pork exports now. The United States knew Russia had every intention of being self-sufficient for its meat and poultry needs. But the U.S. chicken industry and the USA Poultry and Egg Export Council built strategic relationships with Russian importers and customers that helped keep the trade flow for as long as possible. With all major pork-producing countries eyeing the Chinese market, suppliers with strategic relationships in China will fare far better during the down cycle.

Pursue trade diversification. With Greater China accounting for one-third of U.S. pork exports and almost 8 percent of U.S. production, efforts by industry associations like the U.S. Meat Export Federation to spur demand from other markets is an imperative. The growth opportunities may come from U.S. pork’s core trade partners but through also expanding trade opportunities with secondary customers. Markets like Japan, Korea and Mexico are critical, making trade agreements like the U.S.-Japan Trade Agreement and the United States-Mexico-Canada Agreement vital for the U.S. pork sector to retain and grow exports. But the U.S. pork sector has great export opportunities in numerous smaller markets, especially in the Caribbean and in Central and South America.

Better appreciate customers at home. The greatest opportunity and possible challenge for the U.S. pork sector is the U.S. market itself. With few exceptions during the past 30 years, annual per capita pork consumption in the United States has been ranged between 48 and 52 pounds. The chicken sector has grown domestically through increased consumption, and the beef sector by way of a focus on quality and increased prices. But the pork sector has struggled. The National Pork Board has many initiatives to improve pork consumption. The organization represents almost 20 percent of the U.S. population and has the potential to help offset the losses of reduced Chinese purchases.

Make yourself too big to fail. One of the many lessons from the COVID-19 pandemic of 2020 is the necessity of having a strong relationship between producer and packer. That’s true in both beef and pork. Those producers who had deep and strategic relationships with their packers fared far better during the plant shutdowns and slowdowns in April and May 2020. The relationship between a hog producer and his or her packer can become “strategic” in many ways – whether that be by contract, ownership, geography, size and-or efficiency. In an environment where demand is decreasing as exports shrink, producers with the deepest relationships will better weather any changes in plant capacity.

Know benchmarking numbers and raise the bar. Benchmarking is a crucial management tool for most hog producers in the United States. Benchmarking data has given the industry and producers the ability to see how they compete with others but has also illuminated the significant disparity between the best and the worst in the industry. But benchmarking is valuable only if a producer uses the data to identify and address weak points in his or her operation. Productivity in the U.S. pork industry improves each year. But with the headwinds of weaker demand, efficiency is critical for individual producers as well as the industry’s global competitiveness as a whole.

Consider liquidity, liquidity, liquidity. If all else fails, the liquidity in the U.S. pork sector could be key in helping some producers and processors through a difficult period. Going into 2020, equity and working capital at the producer level was good. But it had decreased after the influx of capital during the porcine epidemic diarrhea virus outbreak of 2013 and 2014.

Margins for producers have been reasonable the past five years, but producer operations – and balance sheets – have expanded in sync with new processing plants. Now that producer margins have averaged a loss of almost $10 per head in 2020 on an unhedged basis, liquidity takes on even-greater importance.

Will Sawyer is a lead economist with CoBank. Visit cobank.com for more information.