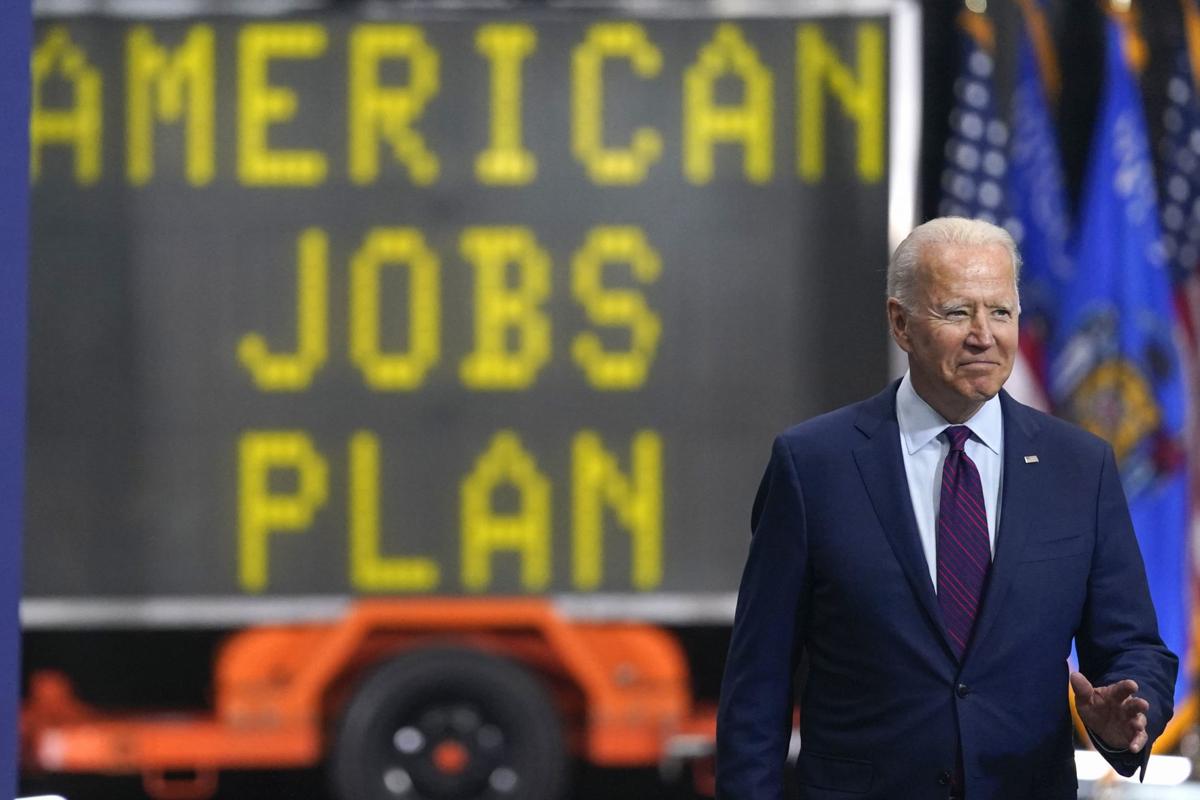 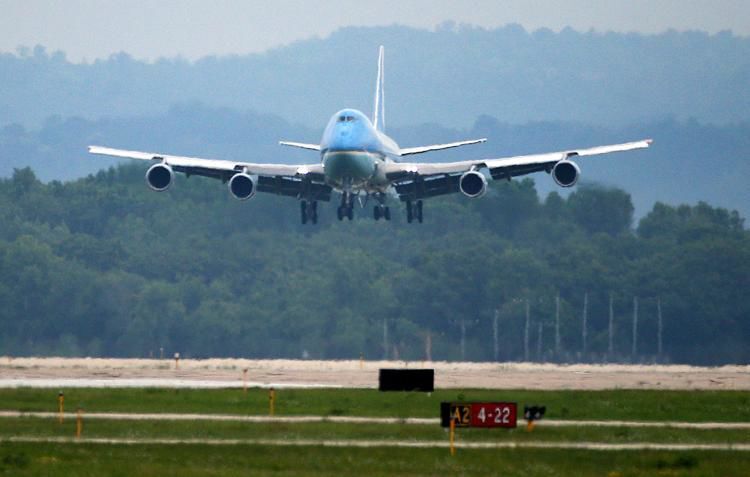 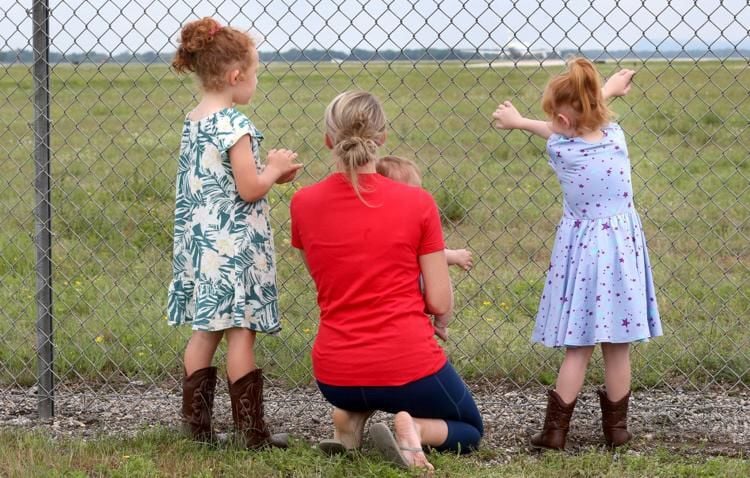 The Remus family of Holmen, including Kelly, Rexton, 4 months, Amelia, 4, and Adeliana, 5, watch the arrival of Air Force One. 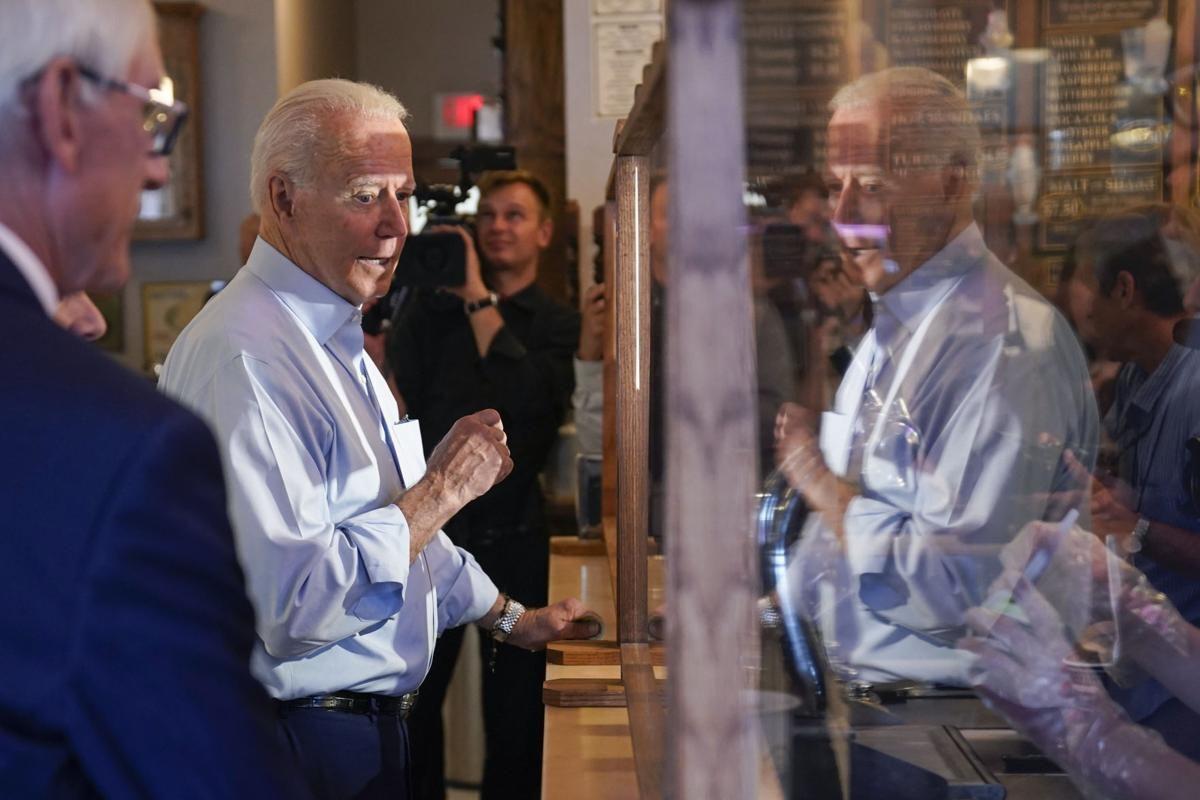 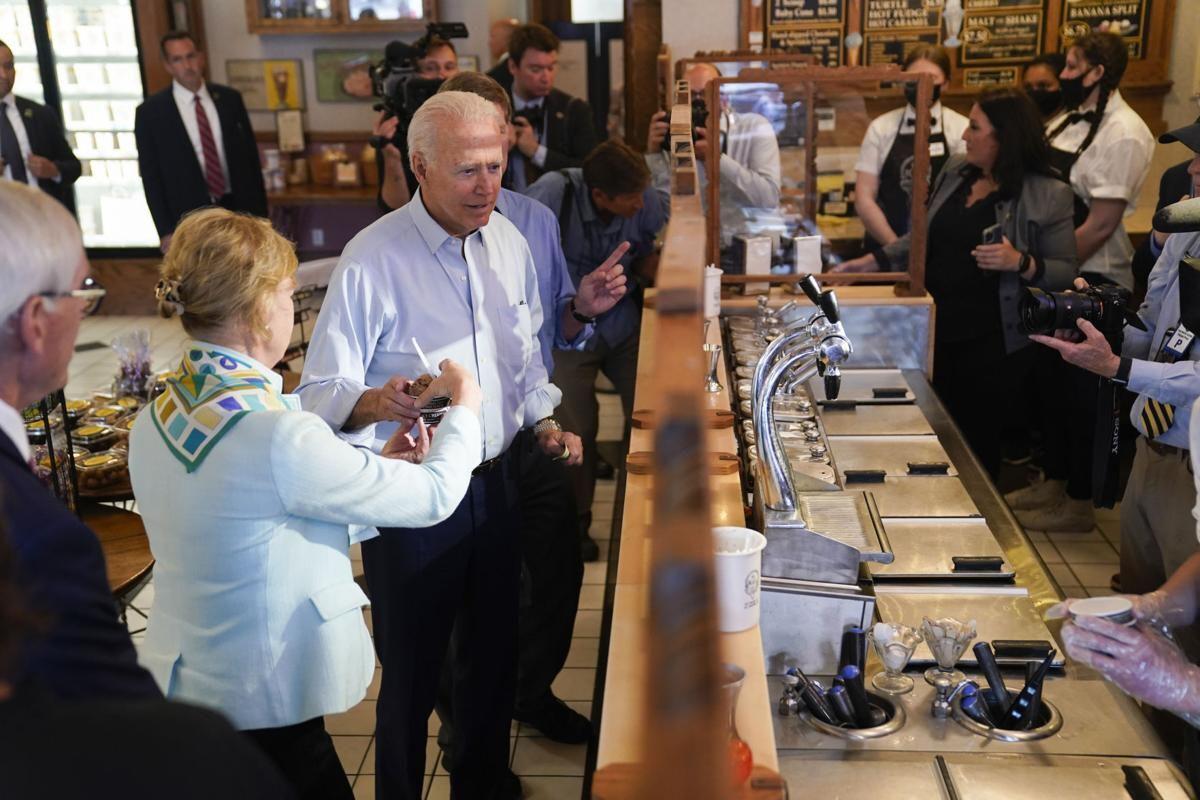 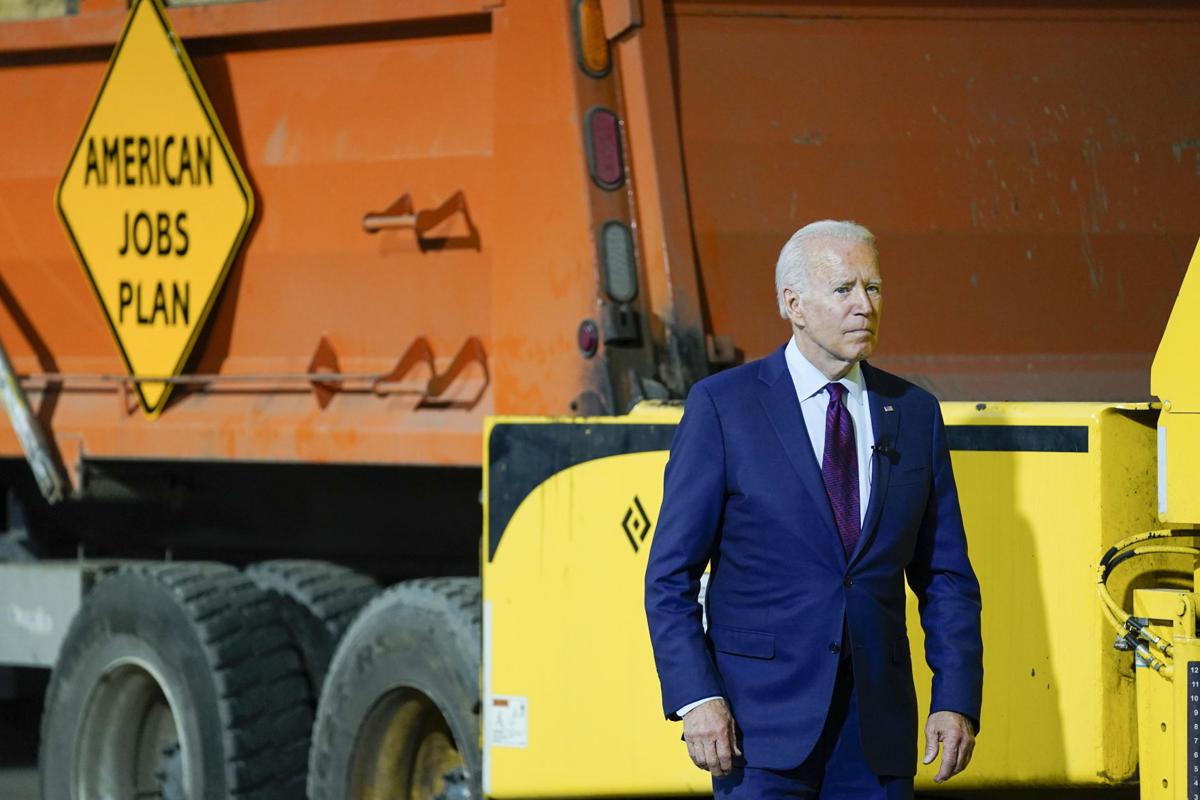 LA CROSSE, Wis. – President Joe Biden made a stop June 29 in La Crosse to promote his infrastructure plan, pitching to communities big and small that the new bill will work for them. He made the case that the American Jobs Plan will directly benefit rural and working-class America, emphasizing the bipartisan agreement reached is a testament that it will help Americans from all walks of life.

“After months of careful negotiation, of listening, compromising together and in good faith moving together, with ups and downs and some blips, a bipartisan group of senators got together and they forged an agreement to move forward on the key priorities of my America Jobs Plan,” Biden said. “There will be more disagreements to resolve, more compromises to forge along the way, but today the American people can be proud. The Democrats and Republicans, the families here in Wisconsin can be proud. Because this country came together and forged a bipartisan deal ... that delivers for everybody.”

He spoke about building infrastructure to address environmental concerns that plague Wisconsin, such as flooding and drinking-water contaminations. He spoke directly on the Per- and polyfluoroalkyl substance contamination – a group of toxic chemicals that has been detected in Wisconsin wells.

“It’s a problem all over the country and I know that you’re feeling it right here in La Crosse County,” Biden said. “Just this spring the state had to provide free bottled water to thousands of people on French Island because they were worried about those chemicals in their groundwater, which were linked to cancer and other illnesses. We’ll pay for that; we’ll get that done.”

Biden touched on the benefits the plan will have on broadband, highways, roads, bridges and more, as well as the jobs the plan is expected to create. He also touched on his tax plan he’s proposed to help pay for it, part of which a group of local Republicans and farmers said they opposed at an event the day before Biden’s trip because of its impact on family farms. But Biden emphasized that the plan would mostly impact the country’s wealthiest.

“I think it’s time to give working people a tax break,” Biden said, a comment that received applause from the group of local workers.

Wis. Gov. Tony Evers said, “In order for our recovery to be successful, and President Biden knows this as well, we have to do what I like to call ‘connecting the dots.’ Which is just to say we have to see how each issue in our state and country affects all of them. Issues from child care to job training, transit, the environment, farming, broadband and more need to be looked at together.”

Wis. Sen. Brad Pfaff, D-Onalaska, said, “I really like what he said is this – from the bottom out and the middle out. And that is so important; let’s make sure that we include everyone in our economy. It connects the dots. It demonstrates that what’s happening in Washington, D.C., has a real-world impact here at the local level. And it also demonstrates the fact that in order for us to make sure we can control to grow our economy we need to make sure that we include all different facets of it. It’s all interconnected.”

The executive director of the Wisconsin Farmers Union, Julie-Keown Bomar, penned an op-ed ahead of Biden’s visit in support of the American Jobs Plan for its investment in broadband, roads, flood control and more.

“Help educate those around you about the benefits of the American Jobs Plan, even if you don’t agree with every single line item,” she said. “This is the largest investment in rural areas that most of us will see in our lifetime and it could change the quality of life in big ways.”

Biden compared his plan to the 1930s rural-electrification program, saying the new infrastructure program will change the rural world in the same way.

“This infrastructure bill signals to the world that we can function, we can deliver,” Biden said. “We can do significant things, show that America is back.”

White House officials issued an internal memo that highlights how the largest investment in transportation, water systems and services in almost a century would boost growth. The memo notes that the total package is four times the size of the infrastructure investment made a dozen years ago in response to the Great Recession and the biggest since Franklin D. Roosevelt’s New Deal in the 1930s.

“This deal isn’t just the sum of its parts. It’s a signal to ourselves, and to the world, that American democracy can come through and deliver for all our people,” Biden said. “America has always been propelled into the future by landmark investments.”

He said there is a critical need to improve crumbling infrastructure – from overwhelmed power grids to lead-filled water pipes to traffic-clogged roads. He stressed that a plan needs to be ambitious to not only improve American daily lives now but also to combat the growing challenges of climate change.

“We’re not just tinkering around the edges,” he said. “I’m going to be out there making the case for the American people until this job is done, until we bring this bipartisan bill home.”

Biden, making an impromptu stop for ice cream after his speech, received a suggestion to order the rocky-road flavor as a nod to the infrastructure bill. But he quipped, “It’s been a rocky road but we’re going to get it done.” He instead ordered cookies and cream, and strawberry.

The Associated Press contributed to this story.

WEST SALEM, Wis. – The village of Neshonoc was one of those towns whose fate was decided by the railroad. But its long legacy of providing pow…

CALEDONIA, Minn. – In their quest for holistic farming methods, Jordan and Rachelle Meyer of southeastern Minnesota are stretching the limits …

Sharing the road with farm machinery is a way of life for drivers in many parts of Wisconsin.  But the potential risk for both farmers and the…

Finding value-added uses for crops is the mission of a team of scientists at the U.S. Department of Agriculture Agricultural Research Service’…

MONTICELLO, Wis. – Taking a new approach to local food production and distribution is the vision of the Community Kitchen Co-op. Based out of …

Ivermectin for animals unsafe for people

AUBURN UNIVERSITY, Ala. – Farm-supply and feed stores can’t keep a livestock-deworming medication on the shelves because social-media posts ar…

The Remus family of Holmen, including Kelly, Rexton, 4 months, Amelia, 4, and Adeliana, 5, watch the arrival of Air Force One. 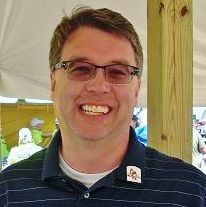