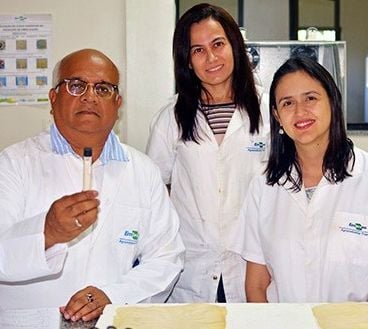 Finding value-added uses for crops is the mission of a team of scientists at the U.S. Department of Agriculture Agricultural Research Service’s National Center for Agricultural Utilization Research. The researchers are especially focused on using procedures that are sustainable and that generate less downstream waste.

Atanu Biswas, a chemist at the center, is using enzymes instead of harsh solvents to catalyze reactions that can transform a raw commodity such as soybean oil into entirely new materials. Among those materials are self-curing biobased resins, gels and sealants such as those used for medical and dental applications. The center’s team also has a patent on a procedure for converting epoxidized soybean oil into additives that can improve the heat resistance and other properties of mechanical lubricants.

Biswas’ group also is using microwave energy to kick-start reactions that can render soybean oil, corn starch or cellulose into biopolymers for use in plastics, coatings, films and other products typically derived from petrochemicals.

“Agricultural commodities such as soybean oil, starch or cellulose can all be chemically transformed via various chemical reactions using conventional heating for industrial applications,” Biswas said. “But microwave reactors allow for increasing yields of biobased material while significantly reducing reaction times – typically from days or hours to minutes or even seconds, saving both time and energy.”

“The biobased plastics we’re working on decompose in just a few months depending on several factors such as the nature of the bioplastic, temperature, microbes present in soil, rate of aeration, and moisture present,” he said.

While that’s a relatively short time compared to some petrochemical-based plastics, biopolymers shouldn’t be considered a panacea, he said. Rather they should be viewed as part of a larger circular economy in which plastics pollution is reduced through recycling, reuse and repurposing discarded products, among other measures.

Biswas values collaboration. He worked with scientists from the Brazilian Agricultural Research Corporation, for example, on ways to improve the properties of edible films made from shrimp chitin, cashew byproducts, sugarcane and other commodities.

Biobased polymers created from soybean oil and corn can replace synthetic products such as polyethylene bags and polystyrene-foam packing materials. That helps to reduce reliance on petroleum, reduce pollution through improved biodegradability, and increase demand for agricultural products from farmers, he said. Visit ars.usda.gov for more information.

WEST SALEM, Wis. – The village of Neshonoc was one of those towns whose fate was decided by the railroad. But its long legacy of providing pow…

CALEDONIA, Minn. – In their quest for holistic farming methods, Jordan and Rachelle Meyer of southeastern Minnesota are stretching the limits …

Sharing the road with farm machinery is a way of life for drivers in many parts of Wisconsin.  But the potential risk for both farmers and the…

A more comprehensive surveillance and tracking system is needed to better illuminate agriculture-related fatalities in the United States, acco…

MONTICELLO, Wis. – Taking a new approach to local food production and distribution is the vision of the Community Kitchen Co-op. Based out of …