The National Oceanic and Atmospheric Administration’s National Centers for Environmental Information has released the final update to its 2022 billion-dollar-disaster report, confirming another intense year of costly disasters and extremes throughout much of the country. The year 2022 tied 2017 and 2011 for the third-most number of billion-dollar disasters. The year 2022 was also third-most in total costs, with a price tag of at least $165 billion. The total annual cost may increase by several billion when we’ve fully accounted for the costs of the Dec. 21-26 Central and Eastern winter storm-cold wave.

In 2022 the United States experienced 18 separate weather and climate disasters costing at least 1 billion dollars. That number puts 2022 into a three-way tie with 2017 and 2011 for the third-most number of billion-dollar disasters in a calendar year, behind the 22 events in 2020 and the 20 events in 2021.

It was another year with an increased diversity of destructive disasters.

• 1 wildfire event – wildfires across the western United States including Alaska

• 1 flooding event in Missouri and Kentucky

• 2 tornado outbreaks across the southern and southeastern United States

• 9 severe-weather-hail events across many parts of the country, including a derecho in the central United States 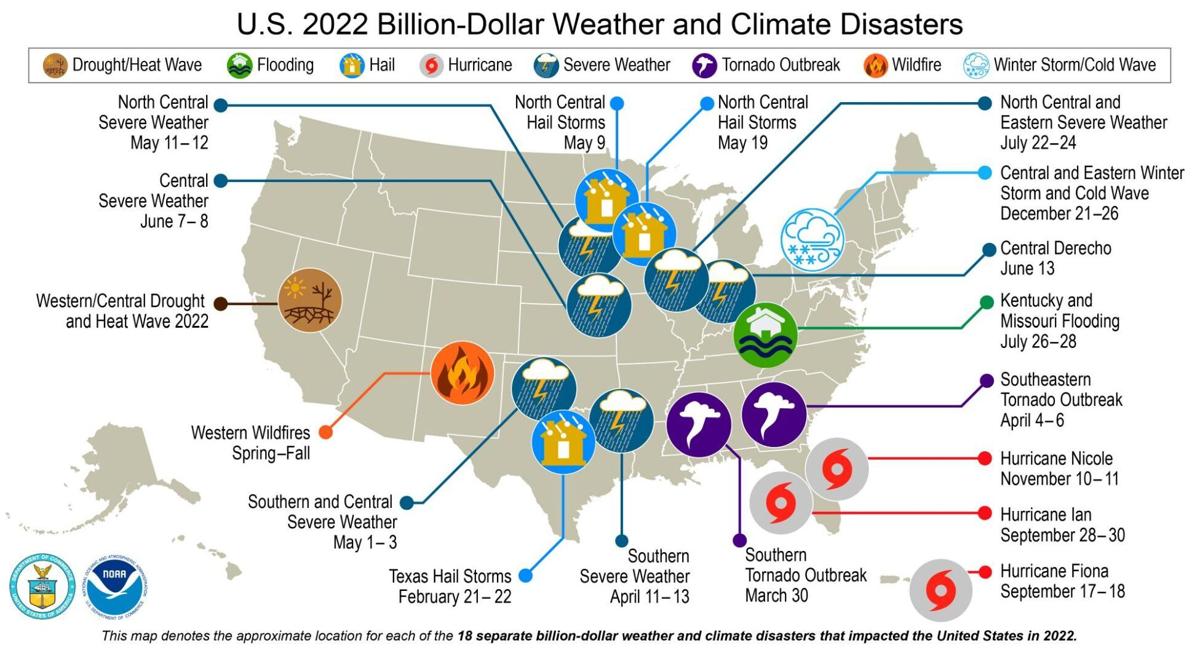 The year 2022 was also deadly in that the 18 events of 2022 caused at least 474 direct or indirect fatalities – the eighth-most disaster-related fatalities for the contiguous United States since 1980.

Damages from the 2022 disasters totaled $165.1 billion. The costliest 2022 events were Hurricane Ian at $112.9 billion and the Western and Central drought-heat wave at $22.1 billion. Adding the 2022 events to the record that began in 1980, the United States has sustained 341 weather and climate disasters with the overall damage costs reaching or exceeding $1 billion. The cumulative cost for those 341 events exceeds $2.475 trillion.

Like many years in the past decade, 2022 was another active year during which we had an increased frequency, an increased cost and large diversity of extreme events that affect people’s lives and livelihoods. That’s concerning because it hints that the extreme activity of recent years is becoming the new normal. The year 2022 marks the eighth-consecutive year in which 10 or more separate billion-dollar disaster events have impacted the United States. The 1980-2022 annual average is 7.9 events; the annual average for the most recent five years is 17.8 events. 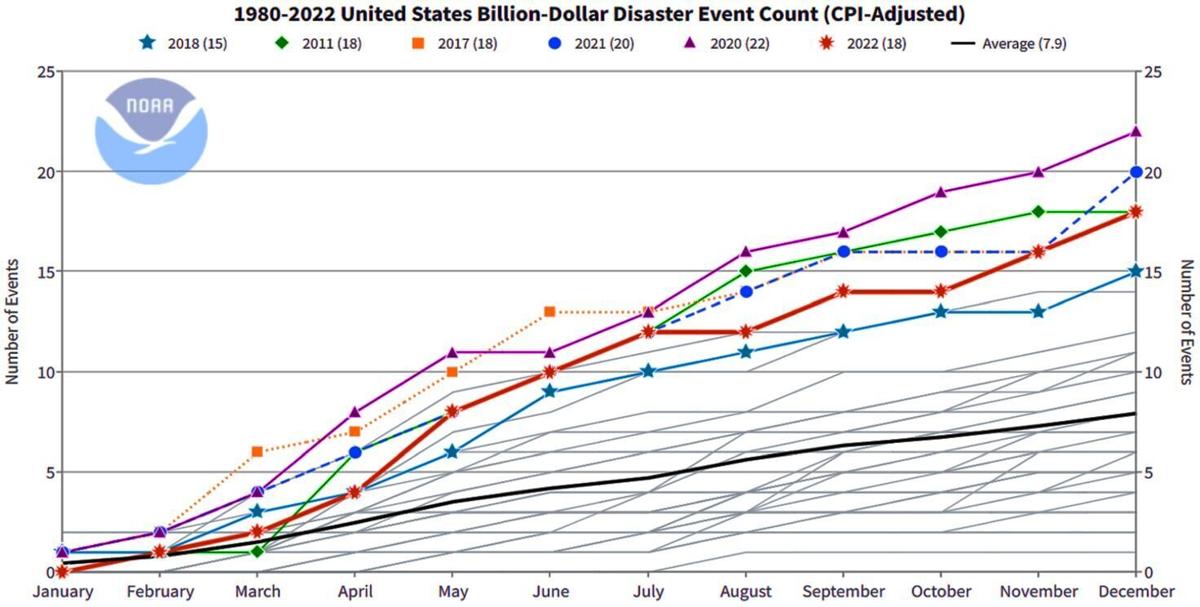 During the past seven years, 122 separate billion-dollar disasters have killed at least 5,000 people and cost more than $1 trillion in damage. In addition, the $100 billion cost figure has been eclipsed in five of the past six years, with 2019 being the exception. One of the drivers of that cost is that the United States has been impacted by land-falling Category 4 or 5 hurricanes in five of the past six years. 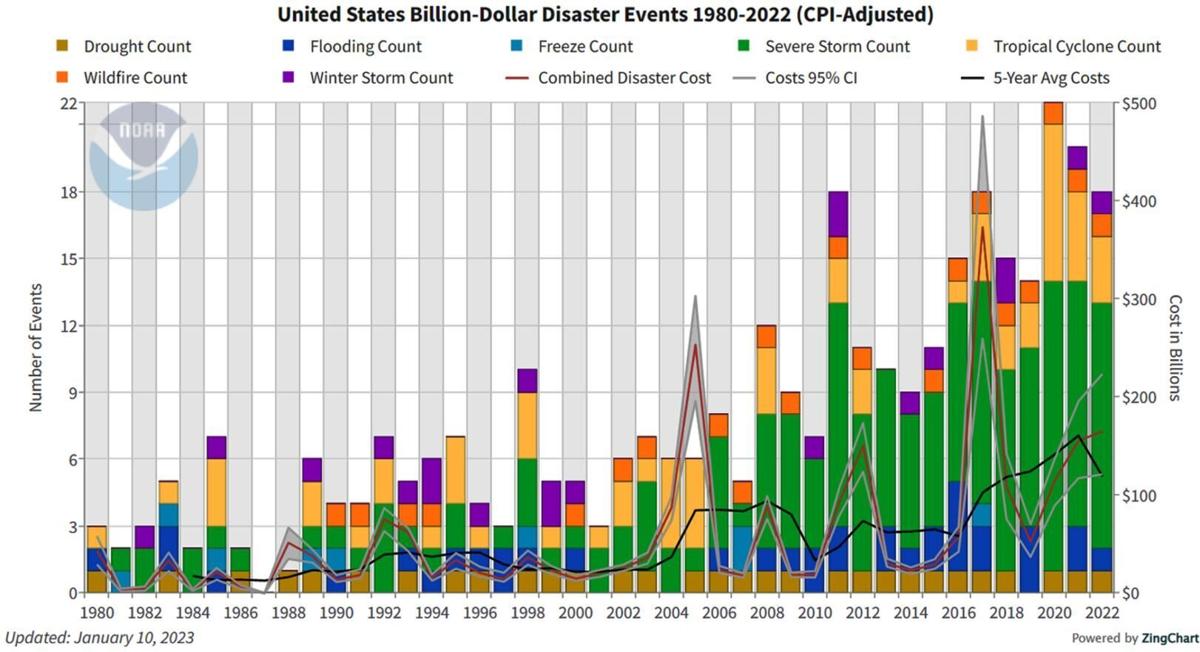 It’s important to keep in mind that those estimates do not reflect the total cost of U.S. weather and climate disasters – only those associated with events more than $1 billion in damages. That means they’re a conservative estimate of how much extreme weather costs the United States each year. But those billion-dollar events do account for most of the damage from all recorded U.S. weather and climate events. And they are becoming an increasingly larger percentage of the total damage costs from weather-related events at all scales and loss levels.

The U.S. losses from billion-dollar disasters during the past seven years are more than $1 trillion and have further skewed the total distribution of extreme weather costs. From 1980-2000, about 75 percent of all disaster-related costs were due to billion-dollar disasters. By 2010, the percentage had increased to about 80 percent. By 2022, it has increased to about 85 percent of all disaster-related costs, or $2.475 trillion out of $2.850 trillion.

• vulnerability or how much damage a hazard of given intensity – wind speed or flood depth, for example – causes at a location, and

• the fact that climate change is increasing the frequency of some types of extremes that lead to billion-dollar disasters.

In other words, the increase in population and material wealth during the past several decades are an important cause for the increasing costs. Those trends are further complicated by the fact that much of the growth has taken place in vulnerable areas like coasts, the wildland-urban interface and river floodplains. Vulnerability is especially great where building codes are insufficient for reducing damage from extreme events. That’s part of the reason that the 2010s decade is far costlier than the 2000s, 1990s or 1980s. 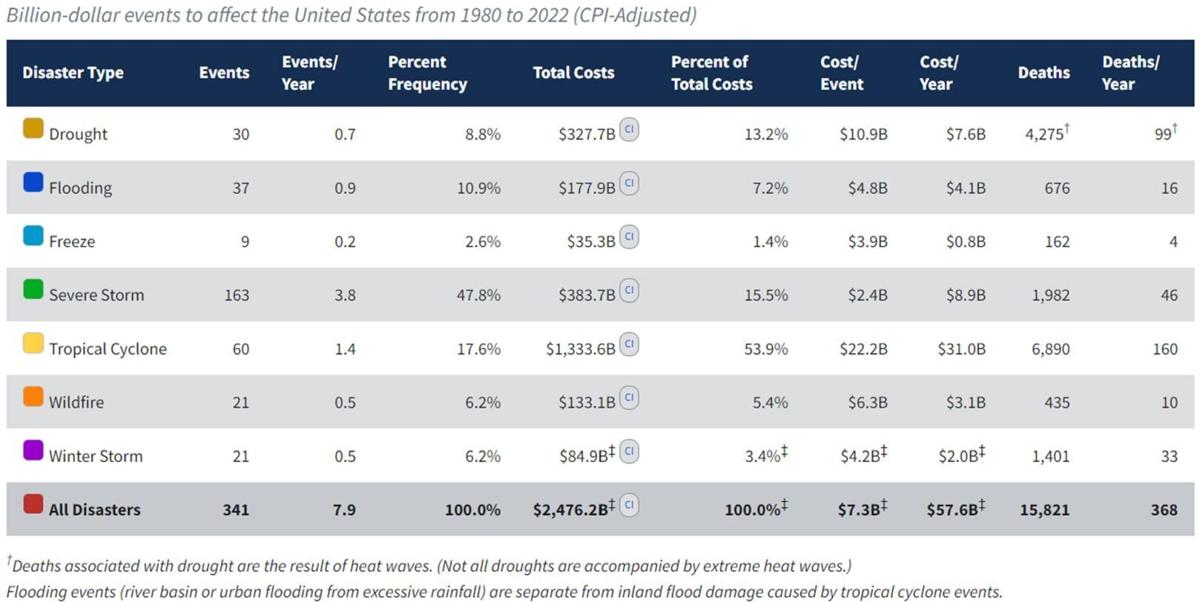 Climate change is also supercharging the increasing frequency and intensity of certain types of extreme weather that lead to billion-dollar disasters – most notably the increase in vulnerability to drought, lengthening wildfire seasons in the Western states and the potential for extremely heavy rainfall becoming more common in the eastern states. Sea-level increase is worsening hurricane storm-surge flooding. Given all those compounding hazard risks, there is an increased need to focus on where we build and how we build, and to invest in infrastructure updates that are designed for a 21st-century climate.

Among the many weather and climate-related disasters to affect the U.S. in 2022, the following caused the most damaging impacts and broke numerous records.

Severe drought conditions impacted the Western and Southern Plains states. Large reservoirs across the West including Lake Mead, Lake Powell, Lake Oroville and Shasta Lake, among others, continue to be depleted. Lake Mead, the nation’s largest reservoir, is nearing dead-pool status and is at the lowest level since it was filled in the 1930s. The Great Salt Lake is also near-record-low levels. The impacts of the drought are affecting crops and feed costs for livestock. Extreme heat also developed for many days across Western and Central states, causing more than 100 heat-related fatalities across Arizona, Nevada, California, Oregon and Texas. It’s one of the more-costly droughts on record, with a diverse array of direct impacts across different regions and industries.

The distribution of damage from U.S. billion-dollar disaster events from 1980 to 2022 is dominated by tropical-cyclone losses. Tropical cyclones have caused the most damage and have the greatest average event cost. Drought, severe storms and inland flooding have also caused considerable damage based on the list of billion-dollar events.

The South, Central and Southeast regions of the United States, including the Caribbean U.S. territories, have suffered the greatest cumulative damage costs, reflecting the severity and widespread vulnerability of those regions to a variety of weather and climate events.

The 43-year climatology of U.S. billion-dollar disasters offers a view of risk from extreme events, which are often seasonal in nature. For example during the spring months severe storms, including tornadoes, hail and high winds, often occur in many Central and Southeast states, but they taper off in the second half of the year. During the spring months there is also greater potential for major river flooding. U.S. springtime flooding from snowmelt and-or heavy rainfall is a persistent hazard that affects many towns and agricultural regions within the Missouri and Mississippi River basins, among others.

The winter months are also active with the potential for powerful winter storms and cold-wave events, much like what two-thirds of the United States experienced Dec. 21-26, which killed at least 87 people and caused billions of dollars in damage. 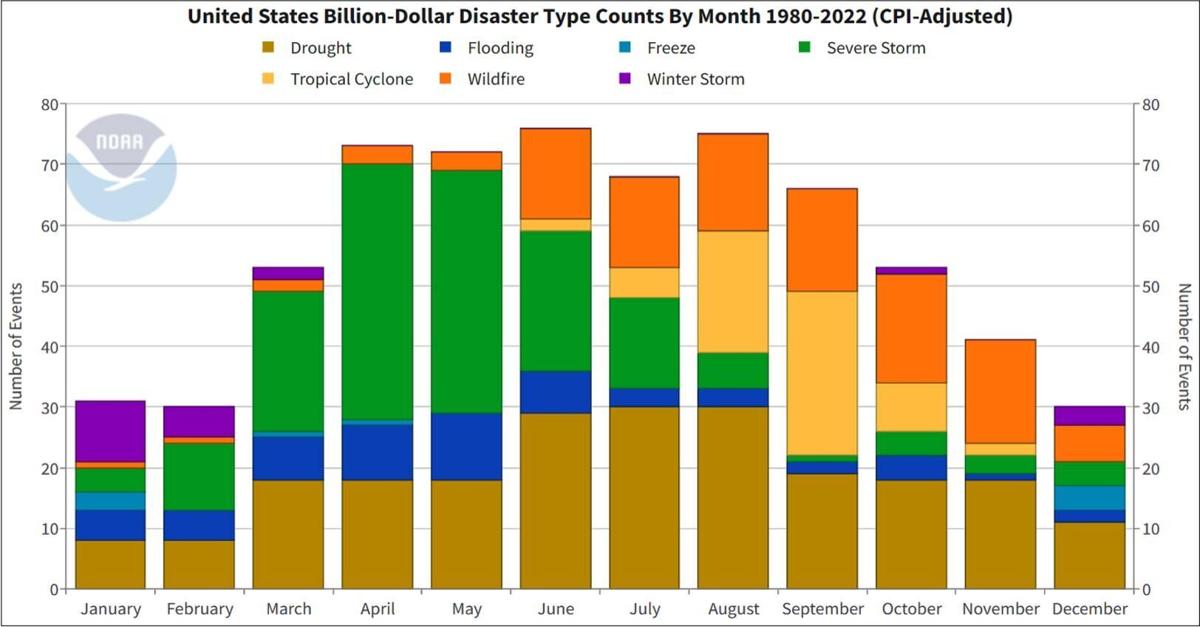 The increase in disasters create “compound extremes” or billion-dollar disaster events that occur at the same time or in sequence, which are also an increasing problem for recovery. The physical and socioeconomic impacts of compound extreme events such as simultaneous heat and drought, wildfires associated with hot and dry conditions, or flooding associated with extreme precipitation on top of snow or waterlogged ground can be greater than the sum of the parts.

During the past six years there were just 18 days on average between billion-dollar disasters compared to 82 days in the 1980s. Shorter time intervals between disasters often mean less time and resources available to respond, recover and prepare for future events. This increased frequency of events produces cascading impacts that are particularly challenging for vulnerable socioeconomic populations.

There is a new focus on multi-hazard risk-mapping at local scales, highlighting areas of socioeconomic vulnerability where communities may be most impacted are less served. As we have seen in recent years, many parts of the country are prone to hazards and their impacts such as the Western megadrought and longer more-intense wildfire seasons to the strong hurricanes that have frequently impacted Florida and Louisiana in recent years. Many new tools from across Federal agencies help us better examine the exposure, vulnerability and resilience to many different hazards so that we can better plan and prepare for the future. Visit www.ncei.noaa.gov/access/billions/mapping for more information.

Visit www.ncei.noaa.gov/access/billions for more information on the report.

MINERAL POINT, Wis. — The surroundings are humble for one of the world's most talked-about batches of cheese.

The United States could potentially produce as many as 15 billion bushels of corn from a projected 92 million acres in 2023. Demand for that c…

The year 2022 was filled with mountains for U.S. cattle producers to climb. From inflated feed costs to the third-consecutive year of drought,…

NEW AUBURN, Wis. – Potential for an additional income stream, the effect of the COVID-19 pandemic and the availability of grant money – that c…