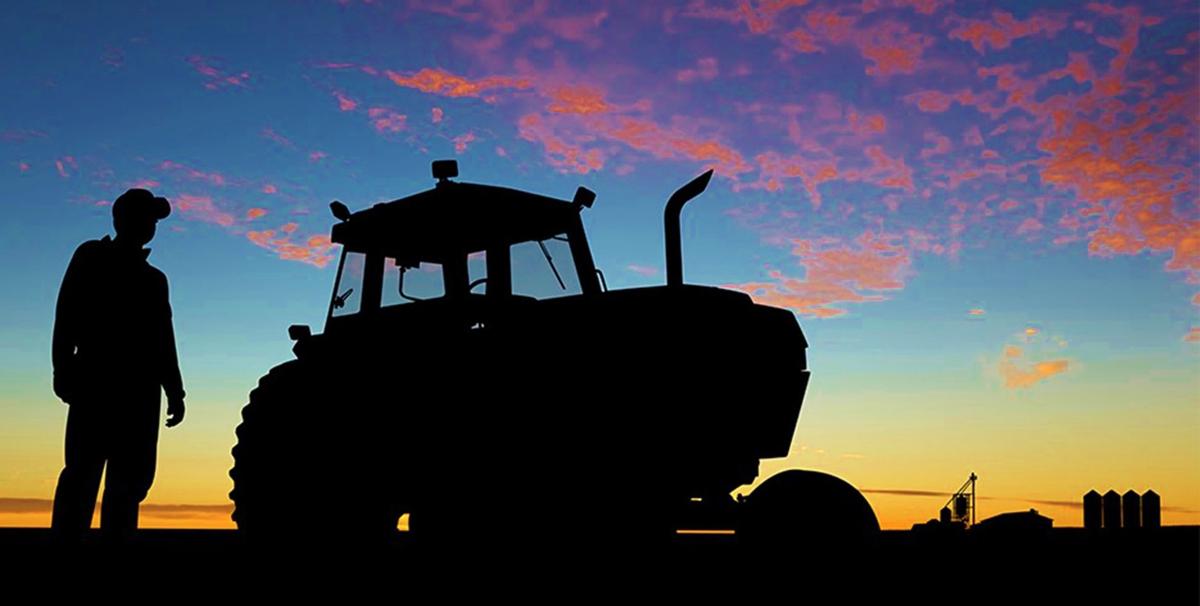 No matter which farm-income forecast a producer follows, one thing is certain. Those numbers will change.

No matter which farm-income forecast a producer follows, one thing is certain. Those numbers will change.

U.S. net farm income, a broad measure of farm profitability, is currently forecast at $96.7 billion. That’s an increase of 3.3 percent or $3.1 billion from the prior year. If realized, net farm income in 2020 would represent the fourth-consecutive year of better net farm income. It would be 55 percent more than the decade worst of $62 billion in 2016. But it would remain 22 percent less than 2013’s best income – and would be only slightly more than the 20-year inflation-adjusted average of $93 billion. 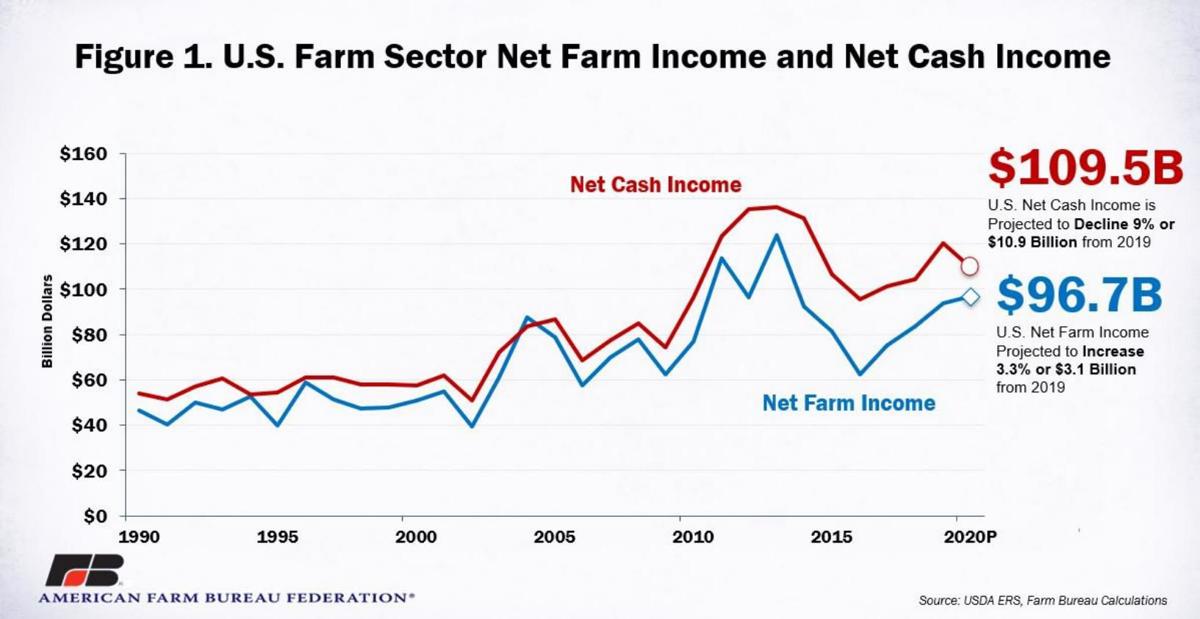 U.S. net cash income is currently forecast at $109.5 billion, a decrease of 9 percent or $10.9 billion from 2019. Net cash income doesn’t include adjustments such as depreciation, non-money income related to farm-level consumption of the farm’s own production, or inventory adjustments that transfer the value of inventory across tax years. 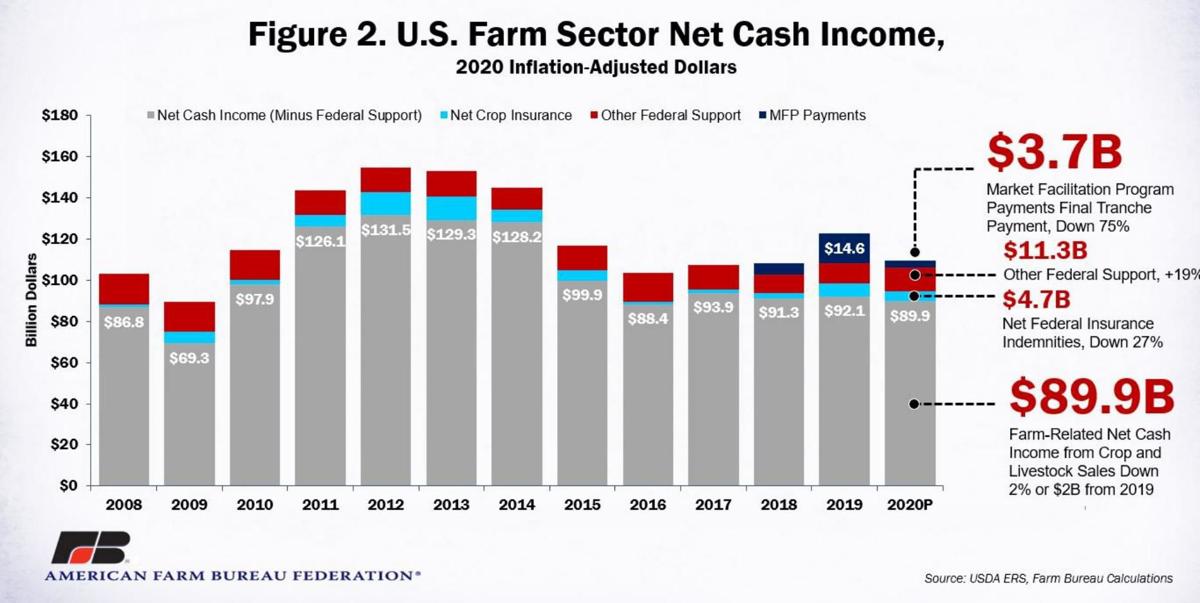 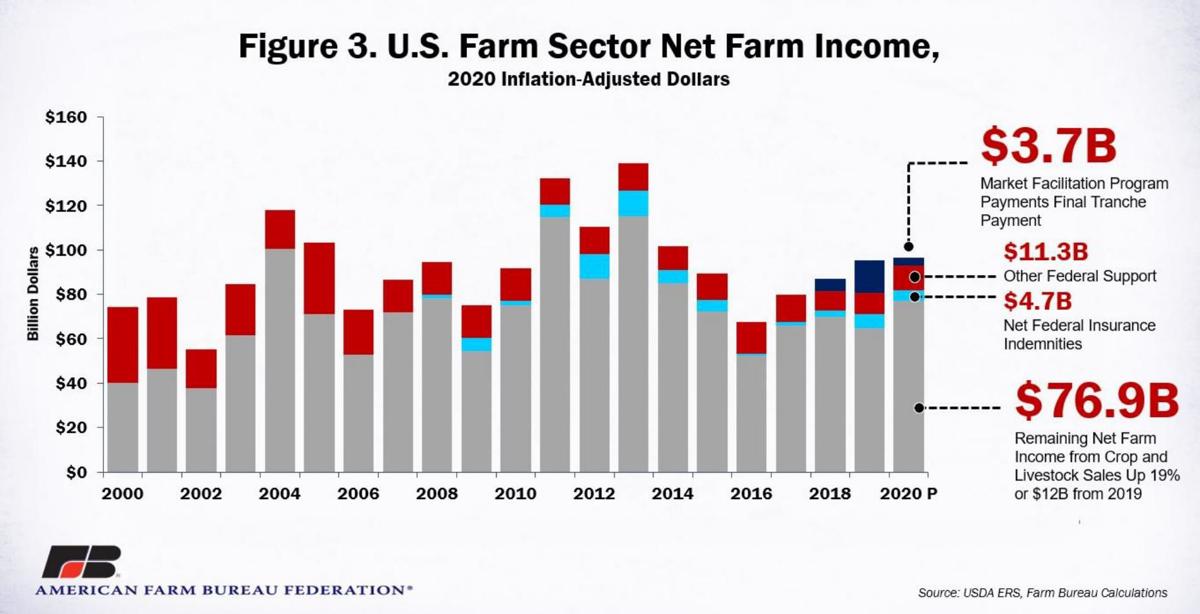 The divergence of the two measures doesn’t happen often – twice in the past 20 years – but it’s primarily related to how sales of inventory are treated. For example during the short crop year of 2019, farmers likely sold products from the prior year’s inventories. Net cash income is based on the year in which the sales occur. But net farm income is based on the year the production occurred. So the inventory adjustment changes total gross income and net farm income for the production year. The inventory adjustment during 2019 totaled -$14.5 billion. That’s the largest since 2012’s -$20 billion. In 2020 it’s forecast at $350 million.

Cash receipts from crops are forecast at $198.6 billion, an increase of $1.9 billion or 1 percent from the prior year. The better crop and livestock cash receipts don’t fully offset the loss in federal-government payments. During 2019 the federal government paid $14.6 billion, in inflation-adjusted dollars, to farmers impacted by retaliatory tariffs, according to the USDA’s Economic Research Service. The final tranche of Market Facilitation Program payments – China and Market Facilitation Program Tranche 3 – was distributed in February 2020. They’re forecast at $3.7 billion, a decrease of 75 percent or almost $11 billion from 2019. Combined gross cash income in 2020 is forecast at $430.9 billion, a decrease of $1.3 billion or one-third of 1 percent from 2019.

When removing trade support, net federal crop-insurance indemnities and other federal support such as farm-program risk-management and conservation programs, the remaining net cash income totaled $89.9 billion. That’s a decrease of 2 percent or $2 billion from 2019. If realized, the remaining net cash income would be the second-worst during the past decade, behind only 2016’s $88.4 billion. It would be $18 billion less than the 10-year average.

After factoring in the smaller inventory adjustment for 2020, the remaining net-farm-income value was $76.9 billion, an increase of 19 percent or $12.2 billion from the prior year in inflation-adjusted dollars.

The USDA for 2020 is forecasting farm debt to reach $425 billion – a record in nominal dollars. If realized, farm debt in 2020 would increase 2.3 percent or $9.7 billion from prior-year levels. In inflation-adjusted dollars, total farm debt would be $15 billion shy of the $440 billion record set in 1980. 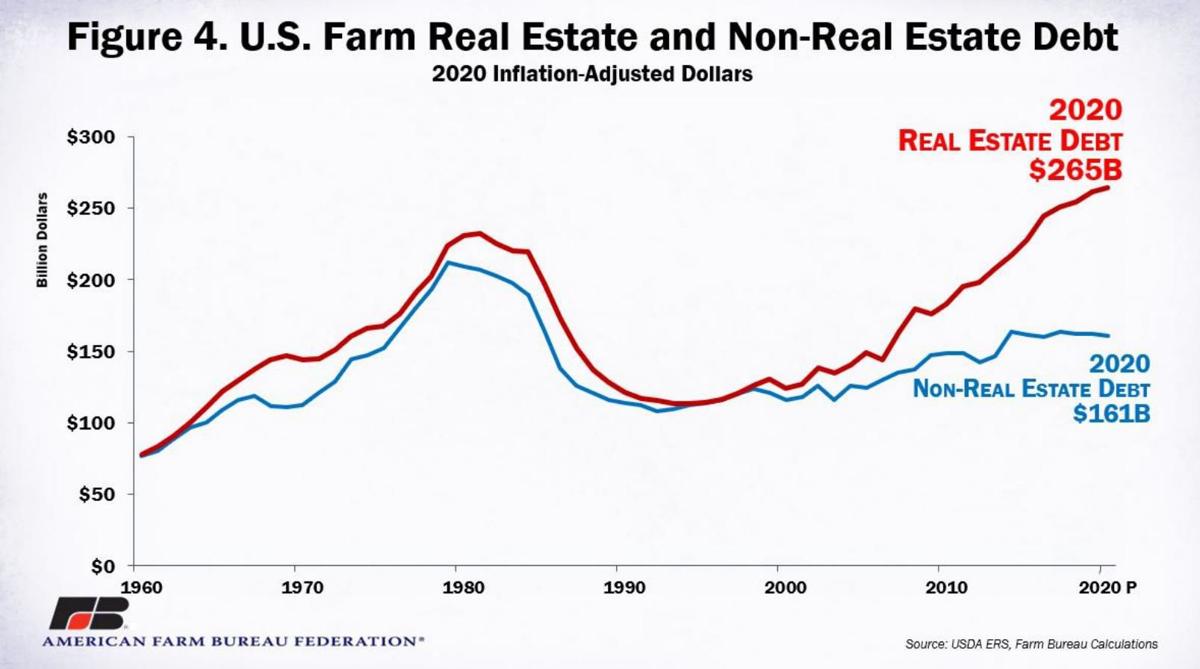 While total farm debt remains at less than inflation-adjusted worst amounts, real-estate debt in 2020 is forecast at $265 billion, an all-time record in both nominal and real terms. That’s $33 billion more than 1981’s $232 billion. It would be an increase of $8 billion or 3 percent relative to 2019 in nominal terms.

The USDA’s recent report forecasts farm-sector profitability to both increase and decrease in 2020. Cash receipts for crops and livestock are expected to increase in 2020 to $384.4 billion. But their increase doesn’t fully offset the $11 billion decline in Market Facilitation Program benefits.

Net cash income is projected at $109.5 billion, a decrease of 9 percent or $10.9 billion from the prior year. Meanwhile net farm income, a broader measure of farm profitability that includes factors such as optional inventory adjustments, is forecast at $96.7 billion. That’s an increase of $3.1 billion or 3.3 percent from 2019. The divergence of the two profitability measures is due to a $14 billion adjustment in inventory made during 2019.

No matter which farm-income forecast we follow, one thing is certain. Those numbers will change. The February 2020 Farm Income Forecast is based on supply and utilization data from a variety of sources – including the January World Agricultural Supply and Demand Estimates, and the USDA analysts’ expectations of acreage, yields and prices in 2020. Farm income would likely improve if additional sales materialize as a result of improved trade with Canada, Mexico, China and Japan among others. But farm income could face more pressure if those sales don’t materialize as expected in the face of increased crop acreage and production.

Hay and Straw for sale: Big Round wrapped bales. Bruning