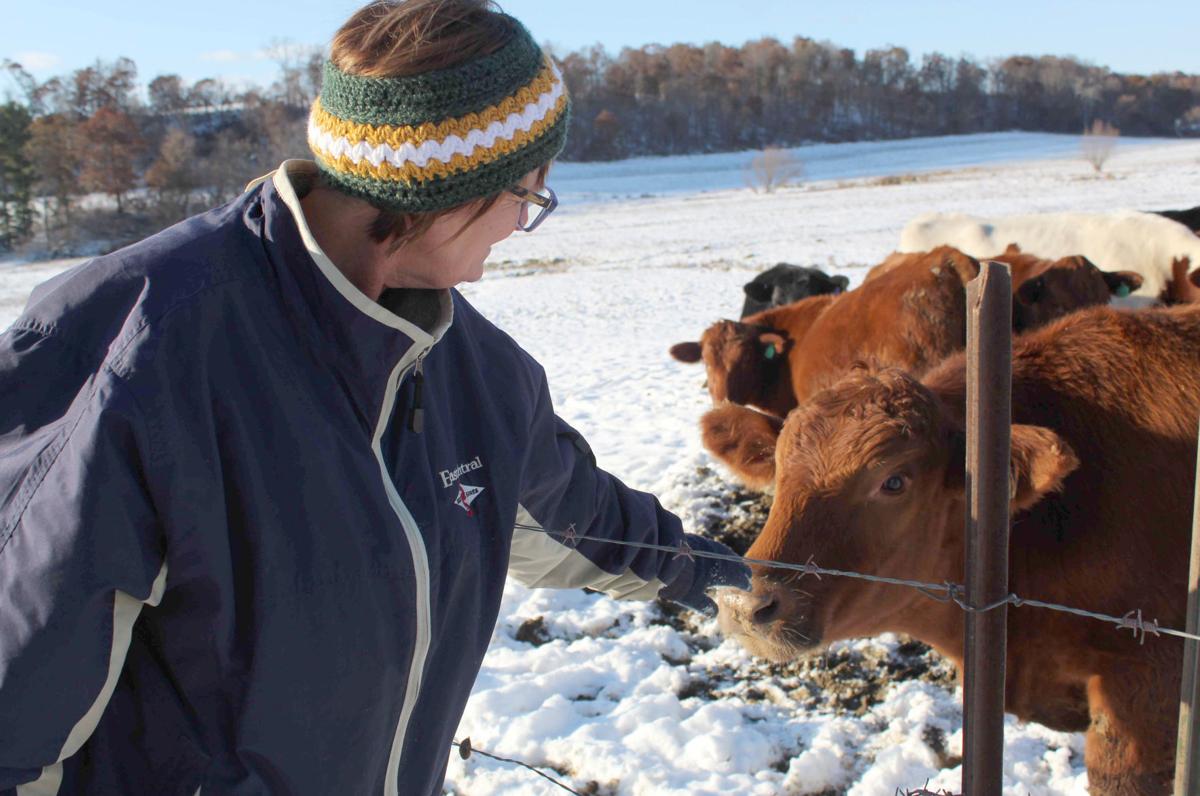 Dorothy Harms pets a RedAangus cow at her farm near Reedsburg, Wisconsin. 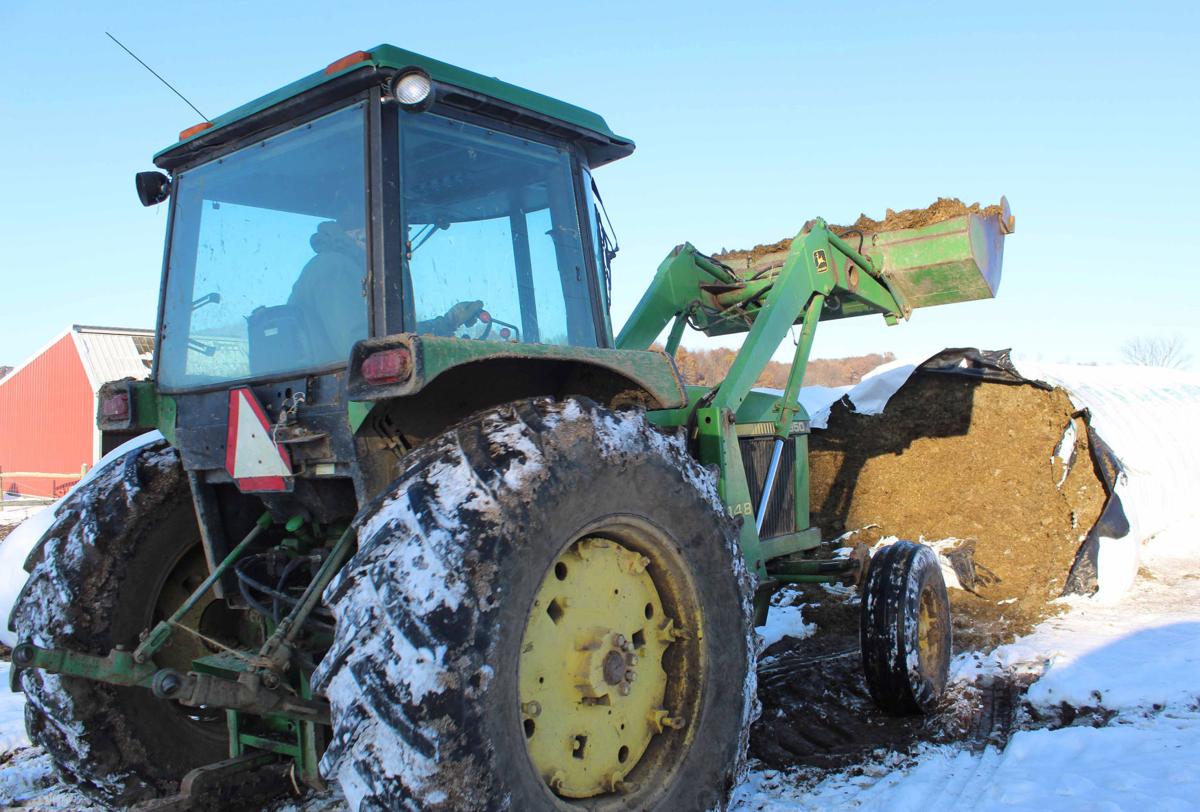 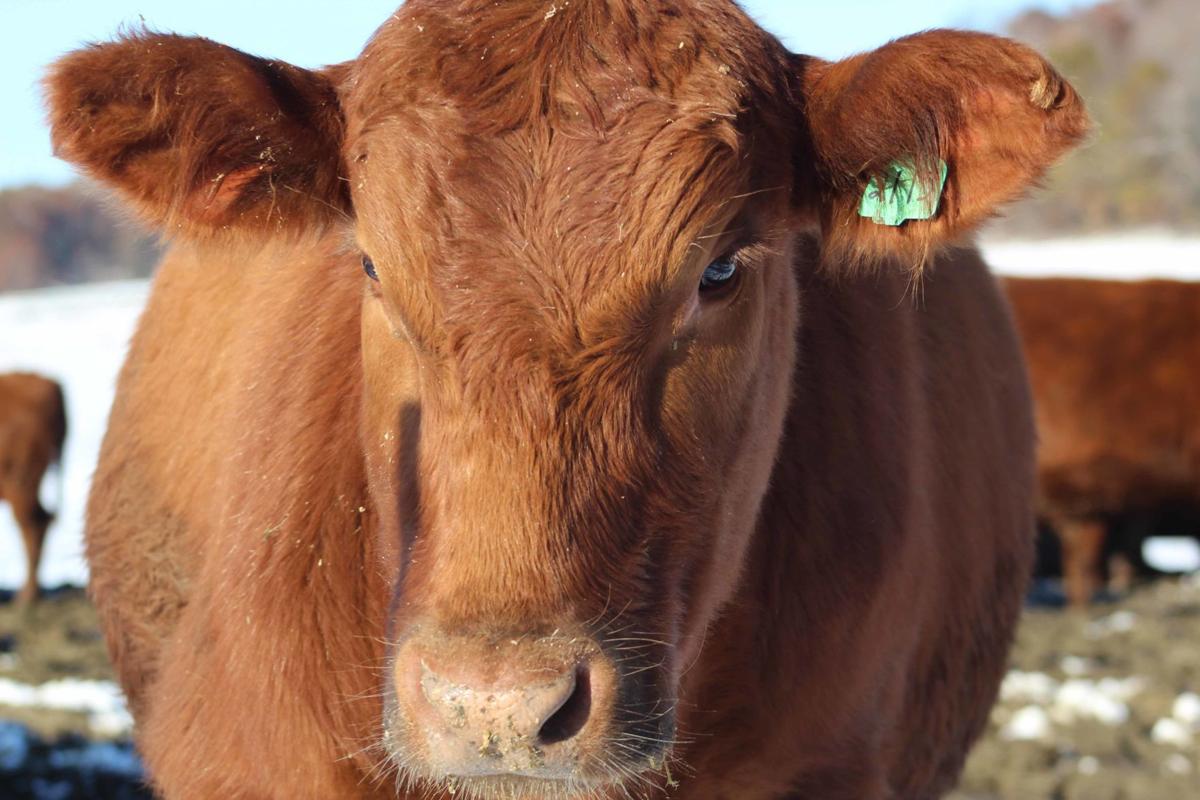 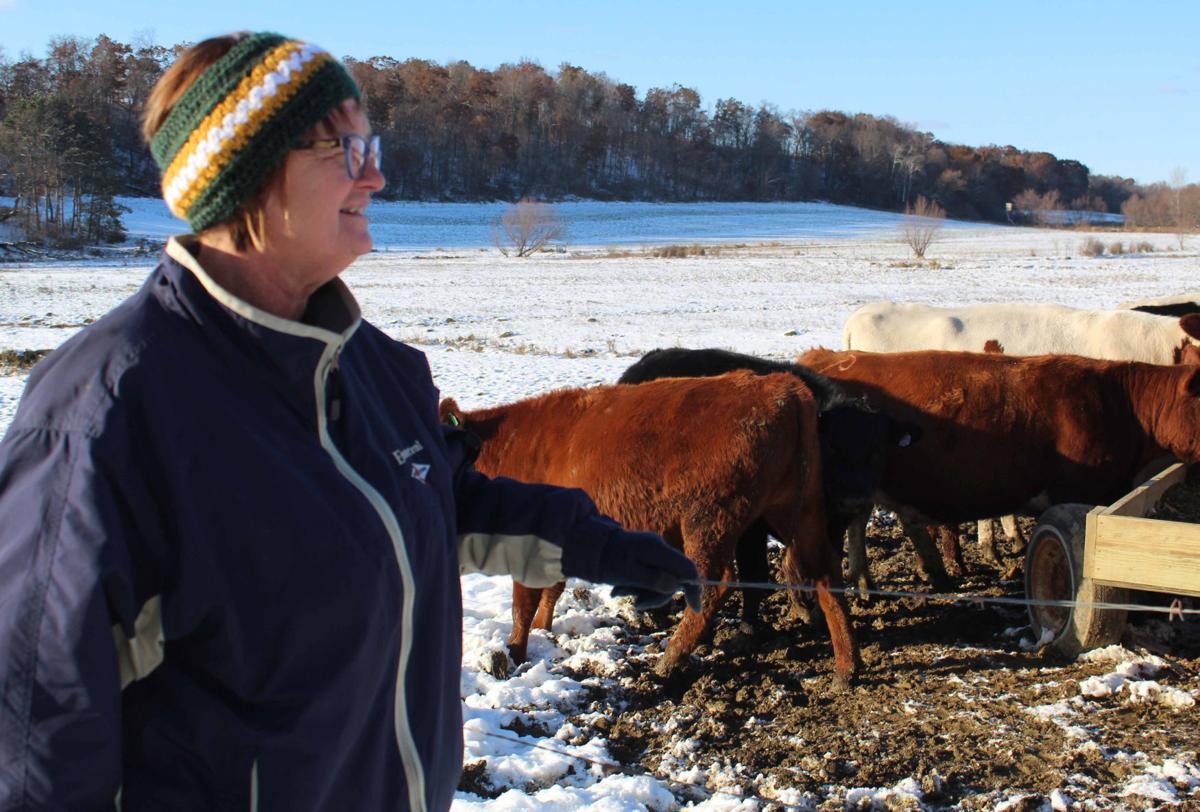 Dorothy Harms, who co-owns Valley Springs Farm near Reedsburg, Wisconsin, looks out at the herd of beef cattle she and her husband take care of.

Dorothy Harms pets a RedAangus cow at her farm near Reedsburg, Wisconsin.

Dorothy Harms, who co-owns Valley Springs Farm near Reedsburg, Wisconsin, looks out at the herd of beef cattle she and her husband take care of.

Jim Goodman decided it was time to retire in June 2018. He was the fourth generation at Northwood Organic Farm near Wonewoc, Wisconsin. There he milked 45 cows each day and grew crops.

The decision to close came from declining milk prices and no one around to purchase the farm, Goodman said. He was receiving $42 per hundredweight in April 2014. His last milk check four years later was about half that, at $23 to $24 per hundredweight.

Goodman, 65, first sold all his cows and then sold the land for his farm in March, except for 40 acres he rents out. He isn’t the only farmer who’s decided to hang up his hat and put his boots away after decades in the industry. Wisconsin lost 638 dairy farms in 2018. As of November 2019, 718 dairy farms had closed during the year. The state leads the nation in farm bankruptcies, with 45 farms declaring Chapter 12 bankruptcy this past year.

Farmers struggled the past couple of years as inadequate commodity prices failed to keep pace with increased production costs and an oversupply of goods. Weather challenges and trade wars have slapped on more difficulties for farmers. The recent trends have the baby-boomer generation deciding to retire for good or switch to more lucrative operations.

Paul Mitchell, director of the Renk Agribusiness Institute, said many farm losses have more to do with baby boomers like Goodman retiring from farming – especially those who don’t want to struggle through difficult market cycles. Because not every farm has another generation to take over and may not want to keep borrowing money to operate, it can be the end of the road for many small farms.

Mitchell said farmers can decide whether to close shop completely or change operations to a more-profitable commodity. Those could be a beef, corn or hay operation. Some may decide to rent their land to others.

The loss of dairy farms is tracked more easily than others because dairy farms are licensed through the Wisconsin Department of Agriculture, Trade and Consumer Production. Tracking closure of non-dairy farms is more difficult because they are not licensed. Farm bankruptcies only represent the worst-case scenario; they don’t reflect operations reducing expenses or refinancing.

When a local farm closes, a ripple effect happens in the local economy; operations like machinery companies and grocery stores are affected as well as the local tax base. Agriculture is still a big contributor to Wisconsin’s economy, contributing $104.8 billion annually, according to a recent study completed by the University of Wisconsin.

Farms are also consolidating; the amount of production in the agriculture industry is contributing to oversupply.

“What you get is lots of production,” Mitchell said. “And the number of people involved just keeps going down because all these farmers are chasing economies of scale, getting a little bit bigger to cut overhead costs on things, a little bit more management efficiency.”

Dairies not only farms struggling

It isn’t only dairy farms. Producers of other popular commodities are also affected by difficult times. Prices of corn, soybeans and cranberries have decreased. Mitchell said the Wisconsin vegetable-processing industry, the second-largest in the country, was also hit with inadequate commodity prices and weather challenges from a wet spring and early-fall snow. There are record shortages in hay stocks.

“Everyone’s just struggling with some of our major crops,” Mitchell said.

The question of whether to keep or sell the 400 cows on their farm near Wisconsin Dells, Wisconsin, is something Sarah Lloyd said she and her husband, Nels Nelson, discuss every day.

“Because you can’t make any money it’s too risky and it’s too hard,” she said. “It’s hard work and if you are not making any money it just breaks your heart to be working so hard and basically paying to work so hard.”

The farm went further into debt by taking short-term loans and converting them into long-term notes. She said the farm also hasn’t fixed machinery that needs replacing.

The trade war between the United States and China has reduced market demand for the nation’s agricultural products.

“(But) things would be bad even without the trade war and the tariffs,” Mitchell said. “It’s not like that’s the cause; it just made a bad situation worse.”

Milk prices have increased slightly after almost five years. But that’s because production has decreased with the loss of farms. The number of milk cows going to the slaughter house increased markedly, said Mark Stephenson, director of dairy-policy analysis for the University of Wisconsin-Madison.

“That’s given us some tightness in the marketplace and allowed our markets to come back up,” he said.

Even though the dairy industry has seen an increase in prices, farms may still close because of the financial hit they’ve taken, he said.

Dean Foods announced in December 2019 that it was filing for Chapter 11 bankruptcy. But the company’s bankruptcy shouldn’t have a major effect on Wisconsin dairy farms, Stephenson said. The only big impact with the bankruptcy would be farmers deciding where else to ship their milk. They may need to pay more to do so, if one of its plants were to close down in resizing operations.

“That’s probably the biggest impact we’ll see down the road,” he said. “There may also be a few farms (affected) if Dean Foods does not honor their obligations for milk already purchased. Under a resettlement that could lose some money, but probably not in Wisconsin. Wisconsin has what they call an agricultural-settlement fund that the companies have had to pay into over the years, if they are to try to make sure farms get paid for what they’ve sold.”

Dorothy and Don Harms recently retired from the dairy industry from their 60-cow operation near Reedsburg, Wisconsin. When they started their retirement plan six years ago, they turned their farm into a bed and breakfast. They also built a beef operation.

The Harms decided to leave the dairy industry because of age, with the couple approaching their 60s. Diversifying a farm helps guard against financial risk. Completing daily tasks on a beef operation is working more like a 40-hour workweek – while dairy was about 80 to 90 hours per week.

Dorothy Harms said her husband is a fourth-generation farmer; the farm’s been in the family for more than 140 years. A fifth generation may take over if her daughter and son-in-law want to purchase the farm. But it won’t continue as a dairy operation.

“We feel that continuing this farm as a beef operation will be the best opportunity for them to continue it in the family,” she said.

She explains to guests how commodity prices affect farmers selling their grain, milk or animals for less money.

“Just imagine if your 401k just (decreased) 50 percent in value,” she said. “That’s how these milk prices impact people like ourselves.”

While relief from lost money came from the federal government in the form of a check, it only provided dairy farms about 12 cents per hundred weight for farms that lost about $1 per hundredweight.

Markets and weather are out of a farmer’s control. The problems have caused stress and depression – and that’s lead to an increase in farmer suicides. Organizations have taken notice, providing an avenue of help. The Farmers Angel Network provides help and support to farmers to spread awareness of mental-health issues. Harms decided to join the group after noticing the need to provide information on resources to help farmers at a crucial time in the industry.

“I was kind of blown away when I went to the first couple of meetings (by) all this assistance that’s available for people they don’t realize,” she said. “Sauk County Human Services have things that can help farmers (but) farmers don’t typically think about going to human services for help.”

Harms said the initiative was started by the St. Peter’s Lutheran Church in Loganville, Wisconsin, after a farmer who was a member of the church took his own life. The group held its first ice cream social in July 2019 at the Sauk County Fair, with 275 farmers attending. It was a way to create socialization, share stories and provide resources with mental-health and financial assistance, Harms said.

Alana Voss is an agricultural educator with the UW-Division of Extension in Juneau and Sauk counties. She said UW-Extension is looking to start the same networking effort in Juneau County. They’re designing a training program for agricultural professionals who work with farmers. They want to teach them how to handle the stress of hearing stories and how to identify resources to provide help. She said UW-Extension is planning another program related to farm succession.

Voss said something positive to highlight in the bleakness surrounding the agriculture industry is that the farming community remains strong. Members help each other in a time of need.

Lloyd works as a special-projects coordinator for the Wisconsin Farmers Union. The organization is leading a national initiative called Dairy Together, which advocates a fair price for farmers that will cover the cost of production.

“We are advocating for an actual change to the pricing system so we aren’t on this wild roller-coaster ride,” she said.

The solution involves economics. Mitchell said it will take commodity prices increasing, which requires an increase in demand and a decrease in supply. Stephenson said fixing trade negotiations will help the dairy industry, especially with other markets.

“It would be good to get that relationship built back up again,” Stephenson said.

He sees potential for a new deal in the ratification of the United States-Mexico-Canada Agreement. But he warns little may change if the deal is approved because many of the same aspects for free trade are seen in the North American Free Trade Agreement. Even if trade negations are settled, markets won’t see an increase overnight. It often takes years for effects to be seen.

Instead of a model focusing on export markets and overproduction, Lloyd said a system needs to focus on the local and regional economies.

“Let’s work with our farmers to help them build up markets that will be of higher value, and sell them and build relationships in the region,” she said. “Of course we’re still going to export some things … but there is a lot of room for us to take opportunity in building out the regional food system in a way that can benefit farmers and will be beneficial to the rural communities.”