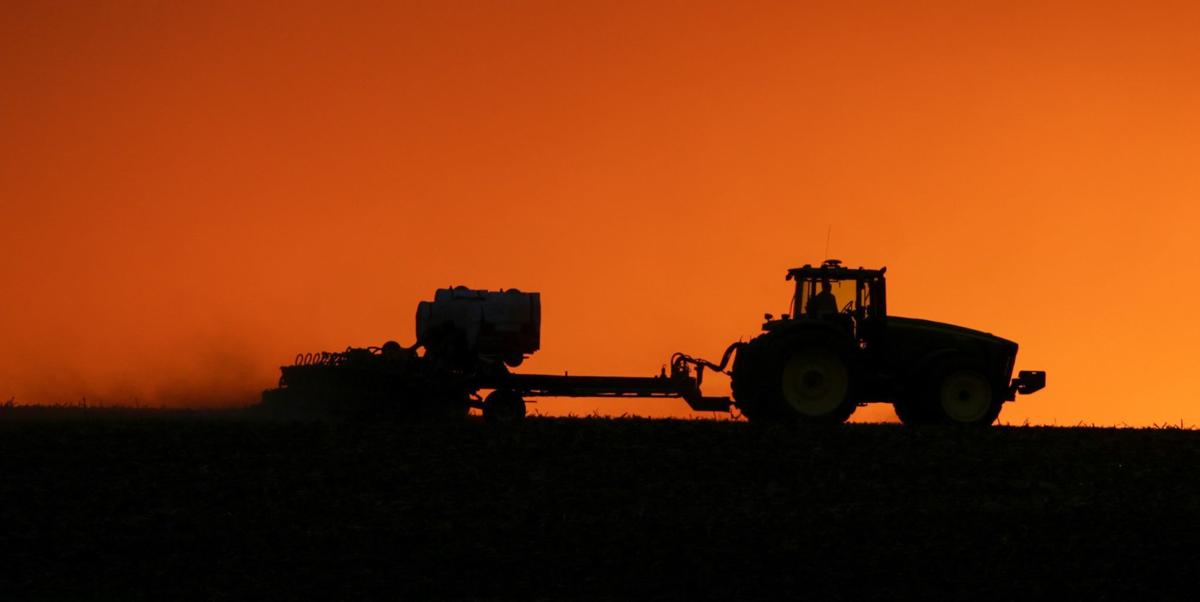 A farmer is silhouetted by the setting sun as he plants a field April 20 near Walford, Iowa. U.S. farmers across the nation leaned more heavily upon the federal government this past year to finance their agricultural operations amid reduced commodity prices and trade disputes, and more of the money they borrowed is now delinquent.

A farmer is silhouetted by the setting sun as he plants a field April 20 near Walford, Iowa. U.S. farmers across the nation leaned more heavily upon the federal government this past year to finance their agricultural operations amid reduced commodity prices and trade disputes, and more of the money they borrowed is now delinquent.

As the COVID-19 pandemic continues to tear through the U.S. economy, the U.S. House of Representatives has released the text of the Health and Economic Recovery Omnibus Emergency Solutions Act – the HEROES Act. Similar to previous stimulus packages, the HEROES Act includes support for various sectors of the economy from additional relief for workers to health care and retirement. It also includes a specific subsection for agricultural producers and additional matters relating to agriculture.

This article reviews some but not all of the agricultural provisions in the HEROES Act. But these are only proposals. Senators, who have yet to release a fourth stimulus bill, will likely have many changes.

There are several provisions within the bill specific to the livestock industry, which has been particularly impacted by COVID-19-related supply-chain disruptions. The livestock supply chain has been significantly disrupted, especially at processing facilities where labor shortages and worker-protection measures are slowing throughput at plants around the country and even causing some facilities to close. As a result some producers have been forced into the heart-wrenching position of needing to euthanize their animals. That’s a last resort because farmers do everything they can to avoid that outcome. But in such a tightly coupled delivery system they’re threatened with going out of business having raised animals they can no longer sell. Figure 1 shows the estimated backup of animals in the hog sector. Not all those animals will need to be euthanized, but many producers may not have a choice.

There’s no way to know for sure the exact number of animals backing up, but one can estimate the difference between a forecast of what slaughter would have been without COVID-19 impacts and actual slaughter. Each week that slaughter numbers decline, the greater the backup becomes. 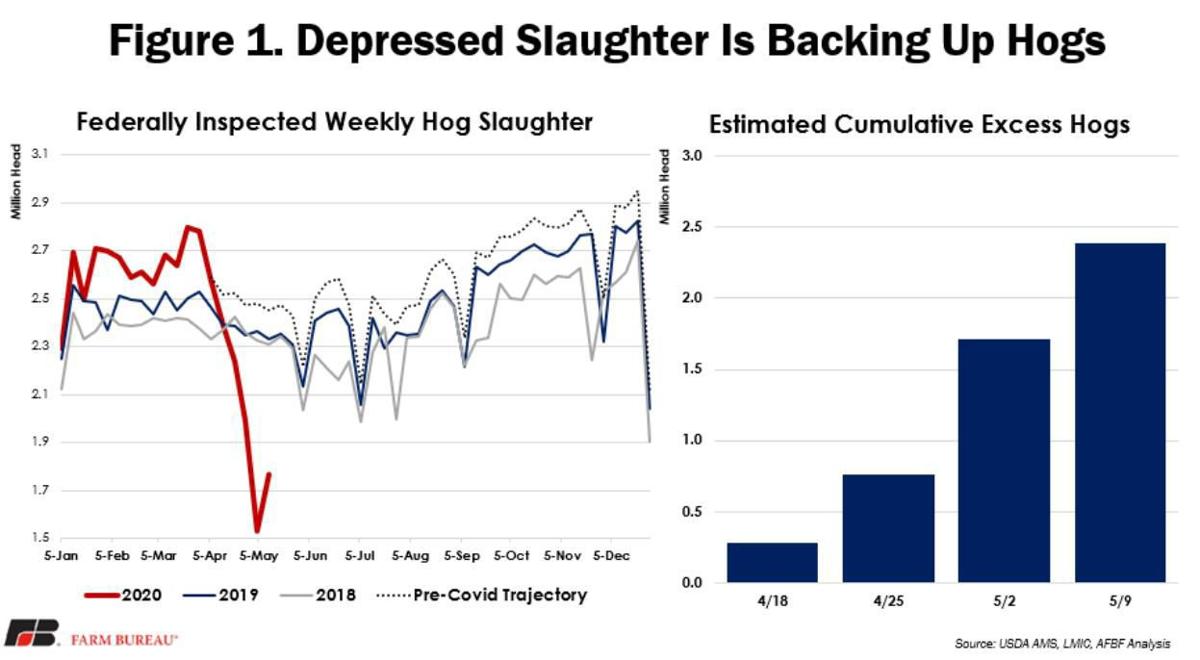 The HEROES Act provides critical relief for producers who have been forced to make those difficult decisions. The bill directs the agriculture secretary to make payments to covered producers to offset losses related to the intentional depopulation of market-ready livestock and poultry due to insufficient regional processing access. For the first month following an initial date set by the secretary, the payment rate would reimburse a producer for 85 percent of the losses determined by the secretary. For each subsequent 30-day period, the payment rate would decline by 10 percent of the value of the losses.

The bill ensures that livestock producers are paid for their animals by requiring dealer trusts. In the current system dealers frequently buy and resell livestock, often grouping them together to meet volume and type needs of their customers. Dealers are allowed to take possession of livestock and pay for them later; dealers don’t maintain a trust account to guarantee payment.

If a livestock dealer were to purchase livestock from a producer and then go out of business before making payment, the producer often has no legal ability to reclaim livestock. Others have priority as compared to the unpaid producer when recovering funds. The Dealer Statutory Trust would give unpaid producers first priority in livestock and related proceeds prior to other creditors.

The bill would provide $300 million to support improved animal-health surveillance and laboratories, some of which are performing COVID-19 tests.

To help streamline the donation of distressed milk through finished-dairy-product donations to food banks and feeding programs, the bill establishes a direct dairy-donation program – a significant expansion of the 2018 farm bill’s milk-donation program. Under the proposed program, the bill directs the agriculture secretary to reimburse participating organizations at the greater rate of Class I milk price for the volume of milk it took to produce the dairy products that were donated.

One particular concern is the price paid for milk products that are donated. The bill proposes to use the Class I milk price, which is often the best milk price, to compensate for dairy products that are donated – such as lesser-valued cheese, butters or milk powders in the donation program. That potentially creates a financial windfall for non-beverage milk products in the donation program.

Already-donated beverage-milk products would be eligible for a retroactive payment equal to the Class IV milk price plus 5 percent of the Class I milk price – a substantial expansion of the 2018 farm bill’s authority that reimbursed only the difference between the Class I value and the Class IV price. As much as $500 million would be available to pay for donated milk and dairy products.

Many small and midsize dairies have grown their operations since their production history was established and locked in under previous farm bills, based on 2011 through 2013 milk marketings. The proposed legislation would allow those operations to qualify for additional coverage for any increases in milk production by as much as 5 million pounds. The bill would not reopen registration for Dairy Margin Coverage for 2020, but producers who register for Dairy Margin Coverage in subsequent years would also be allowed that option for increased milk-production coverage.

Producers who elect into Dairy Margin Coverage with a one-time three-year registration for 2021-2023 will be eligible for a 15 percent discount on their premiums for their elected coverage. That reduces the cost of participating in Dairy Margin Coverage and would help to incentivize producers to participate in critical risk-management programs in the future.

Under a Dairy Recourse Loan Program the U.S. Department of Agriculture would provide as much as $500 million in much-needed recourse loans to be made to qualified applicants. The loan amounts would use the dairy products in inventory as collateral and would be as much as a term of 24 months.

The bill includes direct assistance to the biofuels industry through the Renewable Fuel Reimbursement Program. Any entity or facility that produced renewable fuel or advanced biofuel in 2019, including corn-starch ethanol, is qualified to receive a direct payment of 45 cents per gallon of fuel produced Jan. 1-May 1, 2020. If the facility idled production during that period it’s eligible to receive 22.5 cents per gallon for the amount produced during the same time period in 2019. That equates to an estimated $2.5 billion in direct assistance for ethanol producers. The much-needed support ensures the survival and continuity of the renewable-fuels industry, a critical demand-driver for corn, grain sorghum and other feedstocks.

A direct payment is made available to domestic users of upland cotton and extra-long staple cotton, regardless of the origin of the crop, for 10 months beginning March 1, 2020, through Dec. 31, 2020. The payment can only be used for operating expenses. The direct payment is calculated by multiplying the domestic user’s historical monthly average consumption by 6 cents per pound consumed, then multiplying by a factor of 10 – effectively 60 cents per pound. The historical monthly average-consumption variable is derived from the average consumption of each month from Jan. 1, 2017, through Dec. 31, 2019.

As a result of COVID-19 prices for many agricultural products have cratered. Through the Coronavirus Aid, Relief, and Economic Security Act there is $16.5 billion available for direct payments to producers through the end of the year for losses incurred in specialty crops, livestock and other commodities during first-quarter 2020. Producers who are eligible to receive direct payments under the Coronavirus Food Assistance Program can receive a payment equal to 85 percent of their second quarter’s actual commodity losses as estimated by the agriculture secretary.

For those producers who were not originally covered under the Coronavirus Food Assistance Program, those producers who incurred losses during that time may receive a payment equal to 85 percent of actual losses as estimated by the secretary for both the first and second quarter of 2020 for each commodity. 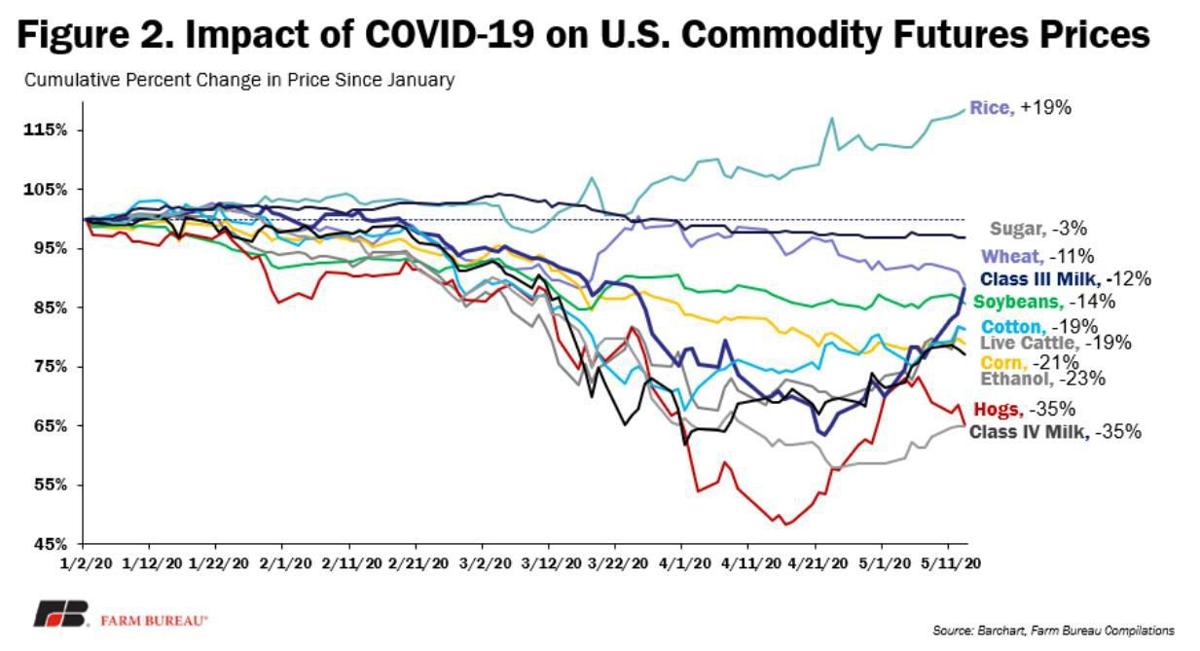 Differences in prices will be accounted for based on location, specialized varieties and farming practices such as certified-organic. Payments will be calculated using differentiated prices as determined by the USDA-Risk Management Agency for federal crop insurance when available, as well as other data from USDA and universities to determine estimated prices.

The bill addresses the Commodity Credit Corporation by amending the CCC’s original charter to allow coverage for the removal and disposal of surplus livestock and poultry due to significant supply-chain interruption during an emergency period. The bill also adds language to the CCC’s charter to aid agricultural processing plants to ensure supply-chain continuity during an emergency period.

The conservation title of the bill includes an emergency soil-health and income-protection pilot program to effectively idle as much as 5 million acres of cropland, with an average rental rate of $70 per acre for three years. Land would be eligible to be enrolled until Dec. 31, 2020. The secretary would be authorized to make an advanced payment for the length of the contract and would also be authorized to make additional cover-crop cost-share payments of as much as $30 per acre. As much as an estimated 5 million acres would be eligible for a one-time advance payment of $300 per acre under the bill’s provisions.

The bill makes $100 million available to eligible states for block grants to alleviate the impacts related to COVID-19 in the specialty-crop industry, specific to supply-chain issues at the state level. Monies would be distributed through the Specialty Crop Block Grant Program; the matching requirements would be waived for the additional funds requested.

In addition to supply-chain assistance, an additional $50 million would be provided for local farmers, farmers markets and other local food outlets impacted by COVID-19 market disruptions. The matching-fund requirements would be waived for recipients.

With the effects of COVID-19 reverberating through the U.S. agricultural sector, Congress has responded with a variety of proposals designed to help farmers, ranchers and agribusinesses bridge the gap. While the Farm Bureau recognizes the need for some of those assistance packages, further analysis is needed. In addition some of the provisions in the HEROES Act do not align with current Farm Bureau grassroots-approved policies.

The next step for the HEROES Act is consideration and potential modification in the Senate. The HEROES package in total is a $3 trillion stimulus package that follows a $2 trillion stimulus package approved earlier this year. It’s likely to be several weeks until the Senate considers additional aid packages, given the desire to measure the effectiveness of previous stimulus efforts as states begin to re-open their economies. In addition any action in the Senate will require bipartisan support. As a result it’s likely that provisions in the HEROES bill could be changed or eliminated in the coming weeks.

To provide immediate financial assistance to farmers and ranchers impacted by COVID-19, the Coronavirus Aid, Relief, and Economic Security Act…