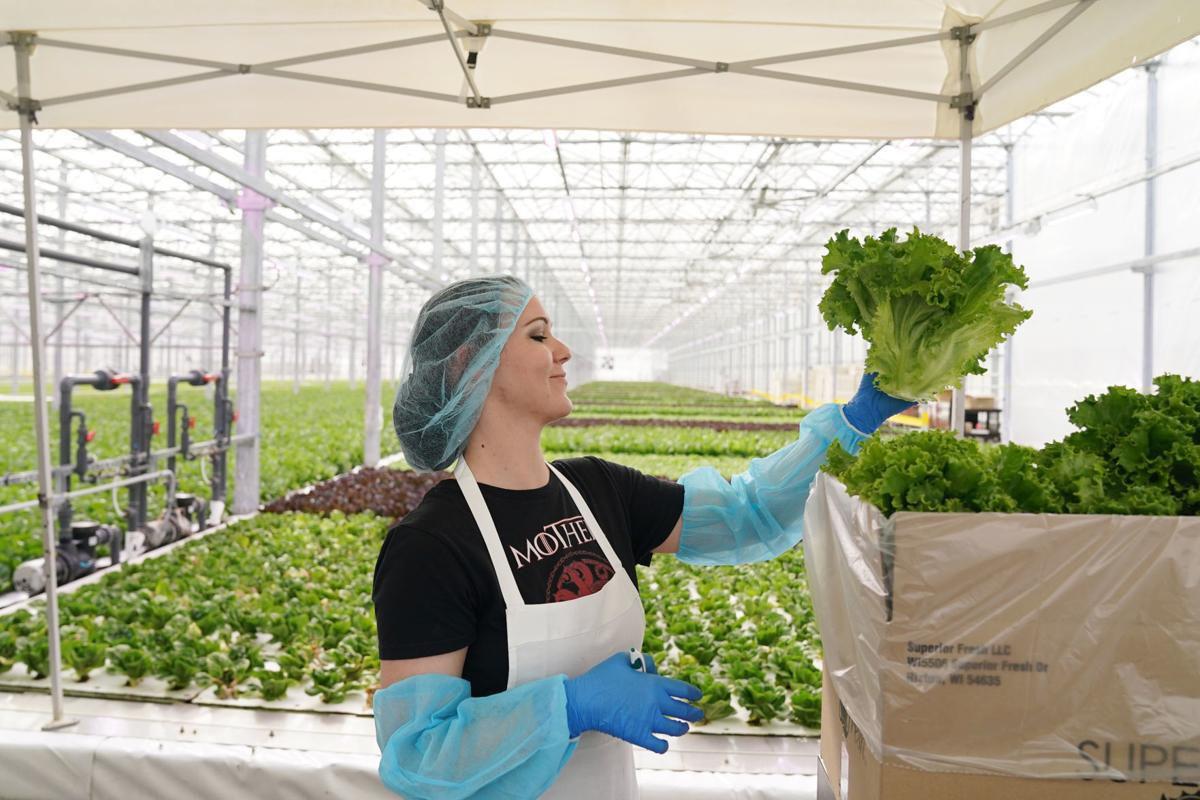 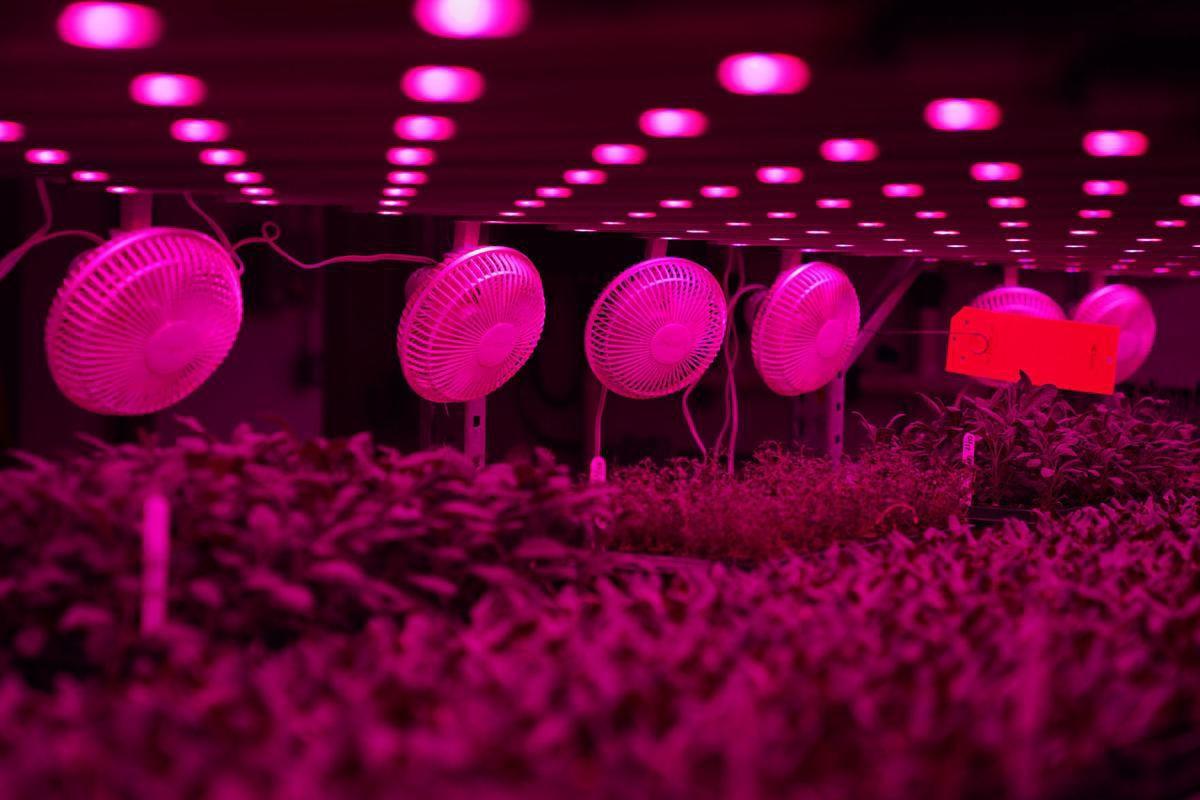 Fans circulate air as produce is started under the pink glow of grow lights near the greenhouse. 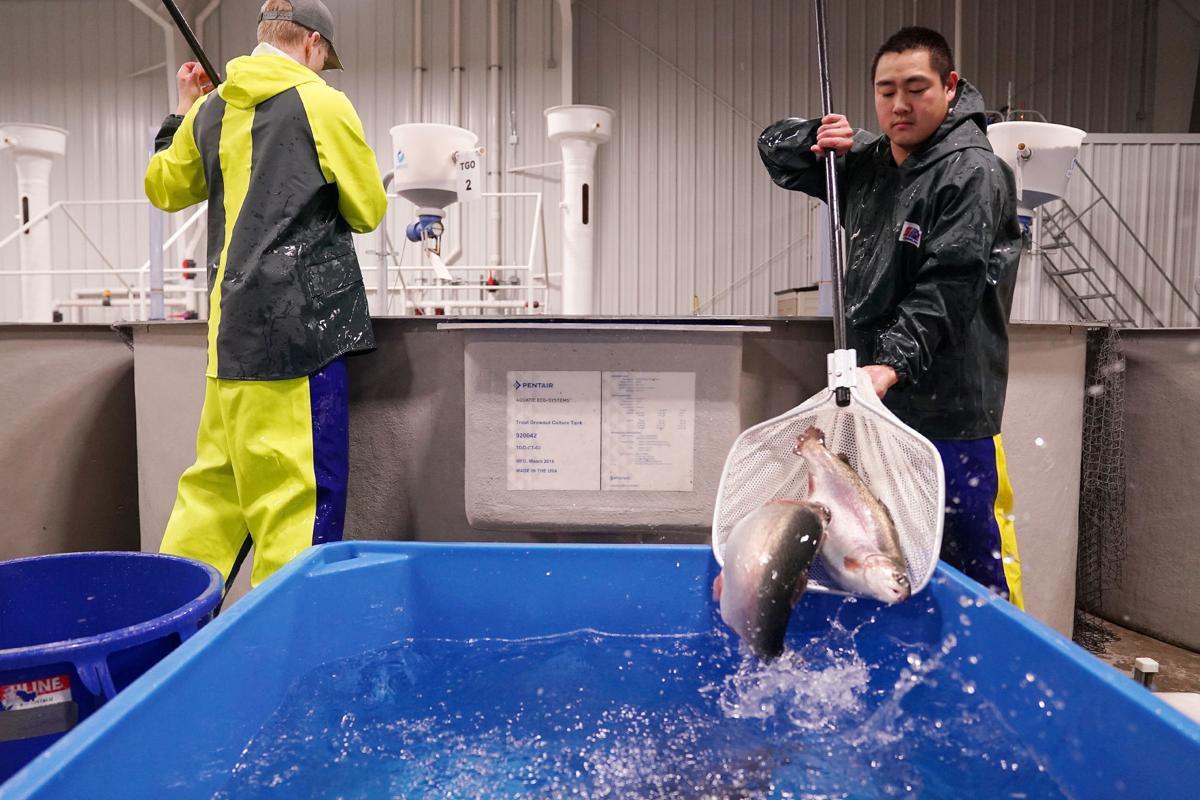 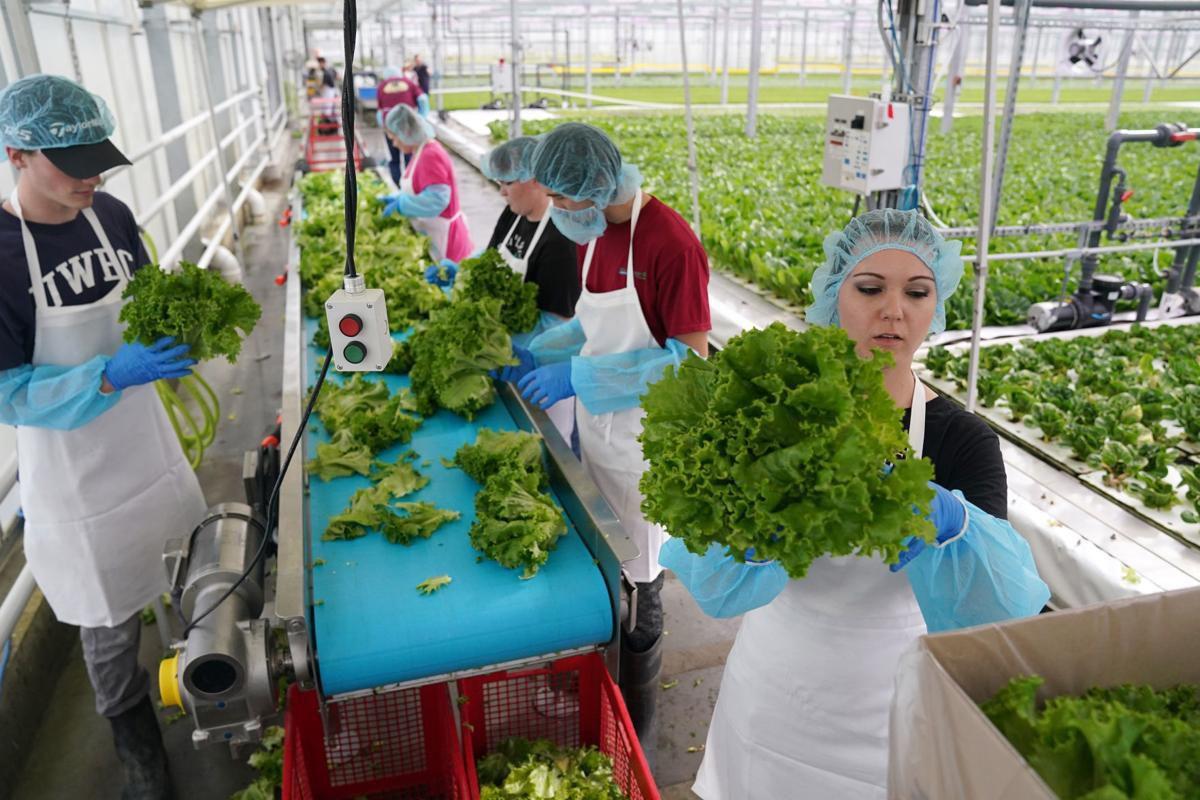 Greenhouse workers sort through produce Feb. 25 as others pack boxes for distribution. 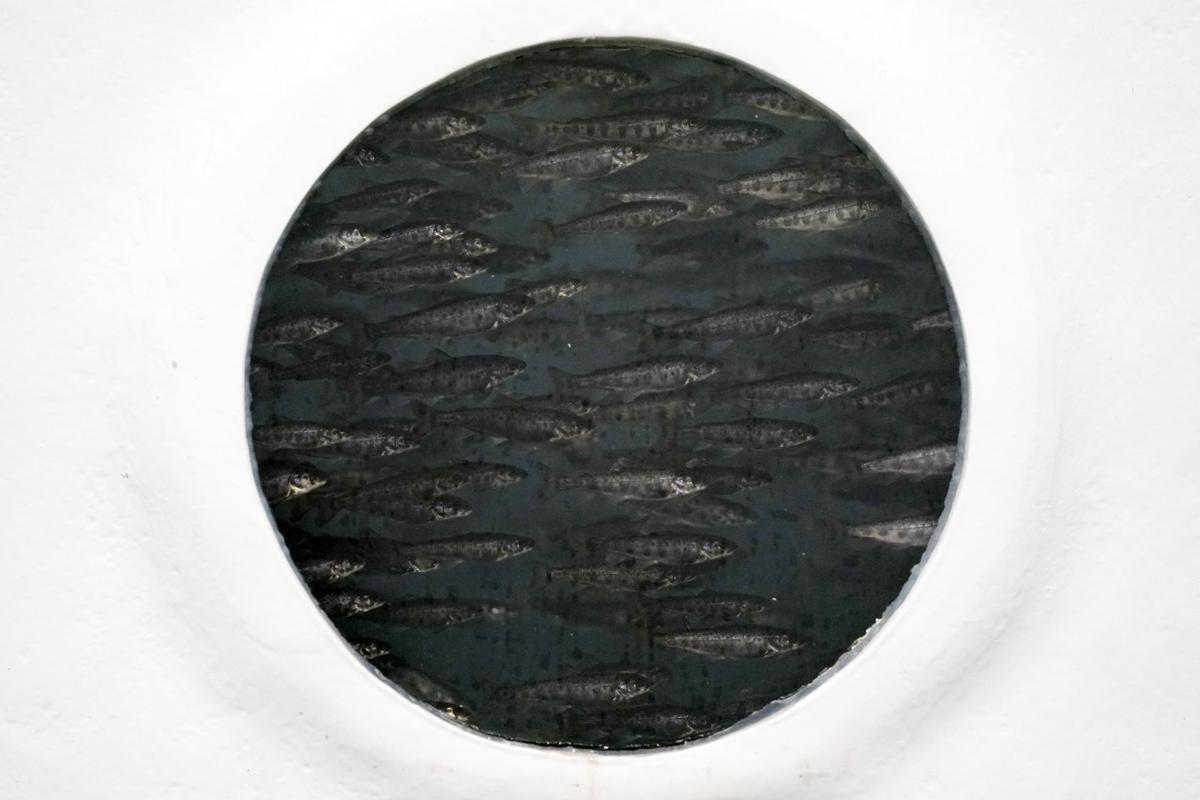 Atlantic Salmon swim past the window of their tank in the fish house. 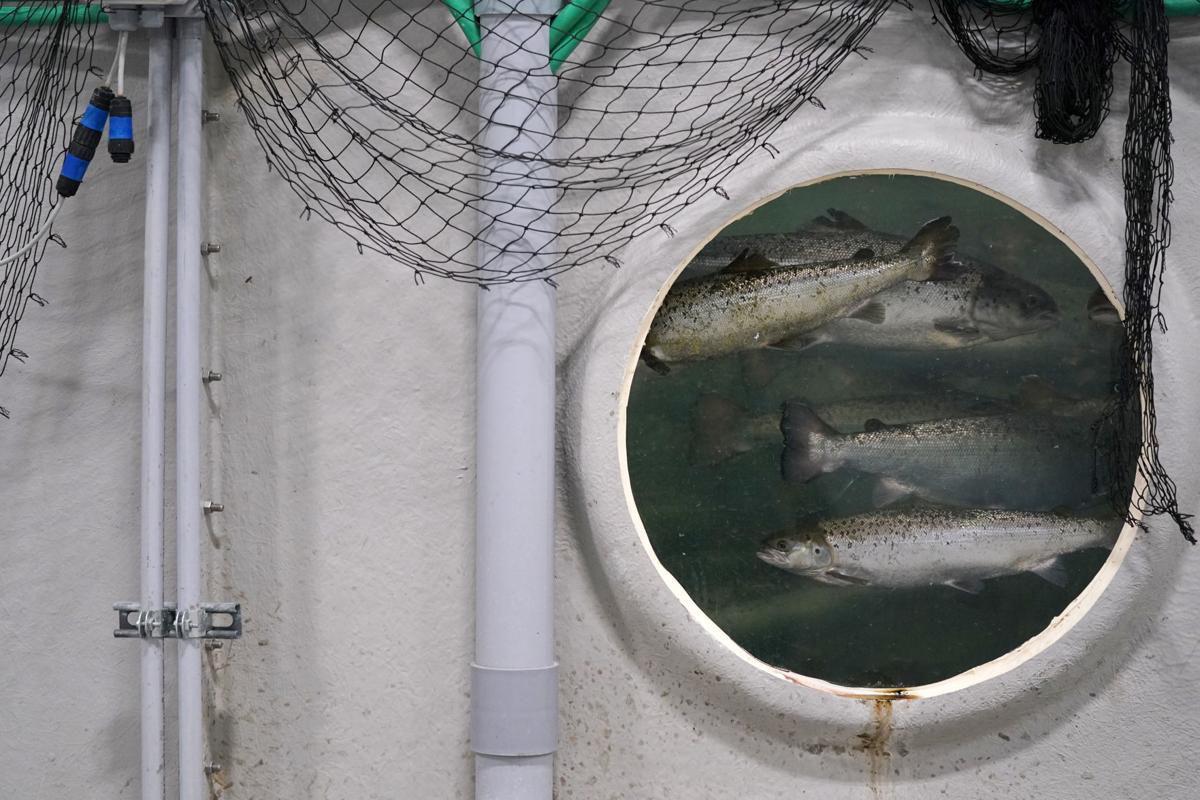 Atlantic Salmon swim close to the window of their tank in the fish house.

NORTHFIELD, Wis. – Stepping into the massive greenhouse of Superior Fresh – 6 acres under one roof – the gentle embrace of warm humid air is quickly followed by the smell of lush green plants.

Daylight streams through the roof and the sound of sloshing water tricks the senses into a kind of tropical reverie. Seen from nearby Interstate 94, the greenhouse at night glows purple as red and blue lights come on to help organic leafy greens grow during sun-deprived winter months.

But Superior Fresh is not just another player in the nature-defying business of growing produce all year in the Midwest. It runs the nation’s and likely the world’s largest aquaponics facility, raising vegetables and fish in a way that benefits both.

Next to its greenhouse is a fish house where 600,000 Atlantic salmon swim in giant tanks. Sharing a closed-loop water system, the fish fertilize the greens and the greens filter water for the fish.

Built in 2015, the farm first reached its full output in 2018 and this past year produced 3 million pounds of greens and about 200,000 pounds of salmon. Both were sold to groceries and restaurants, and ultimately consumers throughout the Midwest.

The farm’s owners, members of the family who owns Ashley Furniture in Arcadia, Wisconsin, aim to double its size and production this year. Even then Superior Fresh will produce just a tiny fraction of the nation’s demand for leafy vegetables and salmon.

But as it tests the prospect for fish farming in the landlocked Midwest, Superior Fresh’s grand experiment raises an intriguing question that, for now, can’t be answered. That is how many other Midwest farmers can follow its path.

“I’ve been working with some dairy farmers in Wisconsin who have reached out and asked how much retraining would they need to convert from a dairy farm to a fish farm,” said Chris Hartleb, professor of fisheries biology and co-director of the University of Wisconsin-Stevens Point Northern Aquaculture Demonstration Facility.

Aquaponics is heralded as a sustainable local solution for a future where resources are under increased strain from a ballooning global population.

“There are very few places in the world where you can actually put salmon farms into the oceans, and those areas are kind of tapped out now,” said Christopher Good, director of research at the Conservation Fund’s Freshwater Institute. “But the demand keeps rising, so the solution has to be land-based and I think the major salmon companies are starting to realize that.”

Hartleb said he sees nothing but growth in aquaponics.

“More and more we are realizing that we have very little food safety and control over our food,” he said. “Most of that risk is eliminated in aquaponics.”

But it’s an expensive business to start and a difficult one to sustain.

Pentair shuttered Urban Organics’ tilapia-and-greens plant in St. Paul this past year without explanation. Some farmers and entrepreneurs have found that focusing solely on either plants – through a system called hydroponics – or the fish, called aquaculture, is easier to manage.

“You have to achieve a certain size to become commercially viable,” Hartleb said. “Prior to that it’s a hobby or side business. But to start out at that large size you have to have private financial backing because banks aren’t willing to take the risk.”

There are a fair number of what Hartleb calls “medium-sized” aquaponics farms in operation that support two to three employees, and largely serve local markets. Those are financially viable because they keep their costs in check with their smaller output.

“Most people getting involved with commercial aquaponics lack the farming background and this can lead to failure,” Hartleb said. “Current farmers have that experience, so they would just need to learn about water-based aquaponics.”

The owners of Superior Fresh decided to go big. The company spent $30 million on the first phase alone. The current expansion is phase three.

They invested in expensive systems that ozonate – add oxygen – and filter the water with ultraviolet light as it returns to the fish. The farm also constantly monitors and tests water for pathogens, temperature and other crucial factors. It has backup pumps for their backup pumps, and generators powerful enough to keep the whole operation running if the power goes out.

The farm produced its first harvest of lettuce about a month after opening in 2017. That brought revenue as salmon grew to harvest weight, which took two years.

“It’s not an easy business,” Gottsacker said. “If you make one mistake, you can literally kill fish in minutes. So if you’re going to do it, do it right. This is definitely a farm so you can’t just leave for the weekend.”

Gottsacker studied biology with a focus on fisheries and aquaculture. He started the farm with backing from Todd Wanek, chief executive and co-owner of Ashley Furniture, and wife, Karen Wanek.

Superior Fresh greens are certified-organic. Its salmon are fed an organic non-genetically-modified diet of fishmeal and fish oil. They are never given antibiotics or pesticides. The farm earned a certification for humane kill methods. The facility sits on almost 800 acres that was changed from monoculture farmland to oak savanna and prairie.

“The hundreds of acres of land that you would need here to grow the same amount of production now can be converted back to its native state,” Gottsacker said.

With vegetables in the mix, the numbers look even better. Every 1.1 pounds of feed produces 1 pound of salmon and 10 pounds of organic leafy greens, Gottsacker said.

Critics of aquaponics often point to the energy required to keep a controlled system stable. Superior Fresh also needs to heat both greenhouse and fish house all winter.

“(But) compared to shipping seafood thousands of miles or trucking produce across the country, the energy footprint to grow fish and greens locally is significantly less than the alternative,” Gottsacker said.

When it comes to animal and environmental welfare, salmon raised in the closed-loop water system – called a recirculating aquaculture system – receive a “best choice” ranking from Seafood Watch. It’s run by the Monterey Bay Aquarium, informing consumers and chefs on sustainable seafood.

“Farmed salmon, generally speaking, tends to have a pretty bad reputation,” said Ryan Bigelow, senior program manager for Seafood Watch. “There are a lot of old tapes still playing on how wild is better than farmed. And while there is a lot of truth to parts of that, (a recirculating aquaculture system) tends to be a much better way to raise salmon than in (ocean) net pens.”

The organization is critical of large net-pen farms where fish escape and concentrations of feed are concerns. Sea lice, a naturally occurring ocean pest, is worsened in tight spaces.

“They are also interacting with wild animals, which probably means a higher use of antibiotics,” Bigelow said.

Open ponds are the most common form of aquaculture in the United States but they aren’t feasible in northern climates. Flow-through systems look like streams and are a common way to raise salmon and trout.

“The negative side is you are constantly flushing water through the property, which is high in nutrients,” Hartleb said.

Flow-through systems are tightly regulated in most states to prevent water pollution so that style of farm is becoming less common.

“Because the permitting is nearly impossible,” he said.

Recirculating aquaculture systems are the newest and therefore the least-common.

The waste is being filtered out and, depending on the facility, either treated on-site or sent to feed plants. Because the entire system is contained it’s unlikely to find parasites in the water, reducing the use of drugs. And the risk of a food-borne illness at an indoor aquaponics facility is also unlikely.

Some of the nation’s biggest leafy-green recalls in recent years have been traced back to outdoor farms where the groundwater was contaminated with waste from nearby cattle farms. Salmon are a cold-water fish that aren’t known as Escherichia coli carriers.

“As long as you keep your biosecurity up, and pathogen-free eggs, then you can raise really healthy fish,” Good said.

Because salmon obtain their pink hue from eating carotenoid-rich food like krill and shrimp, Superior Fresh needed to find a natural way to achieve that same color. The company doesn’t add a synthetic dye to achieve the color, a technique at farmed facilities around the world. Instead the company feeds the fish a product called Panaferd that’s derived from a microorganism found in the ocean. The product is approved for use in the organic-aquaculture industry.

More than 90 percent of salmon in the United States is imported, with the majority coming from Chile, Norway and Canada. The vast majority of salmon sold to Americans is raised in ocean net pens.

Right now land-based recirculating-aquaculture-system aquaculture – and the even-smaller aquaponics subset within it – is largely being pioneered by entrepreneurs and investors.

“But the major salmon companies are watching this,” Good said. “As soon as one of those companies decides that land-based is the way to go, this will really take off.”

When completed later this year, Superior Fresh’s greenhouse will expand from 6 acres to 13 acres; the fish house will double from 1 acre to 2 acres. Its salmon harvest could increase to 1.3 million pounds a year. Even though no other aquaponics facility in the United States is as large as Superior Fresh, many fish-only recirculating-aquaculture-system farms are larger.

“We want to keep growing,” Gottsacker said. “We’ve got other sites that we like throughout the U.S. – one on the East Coast, one on the West Coast – where we would build farms, likely as large or larger than this one because the markets are bigger there. This is a long-term game and a long-term business plan with long-term solutions.”