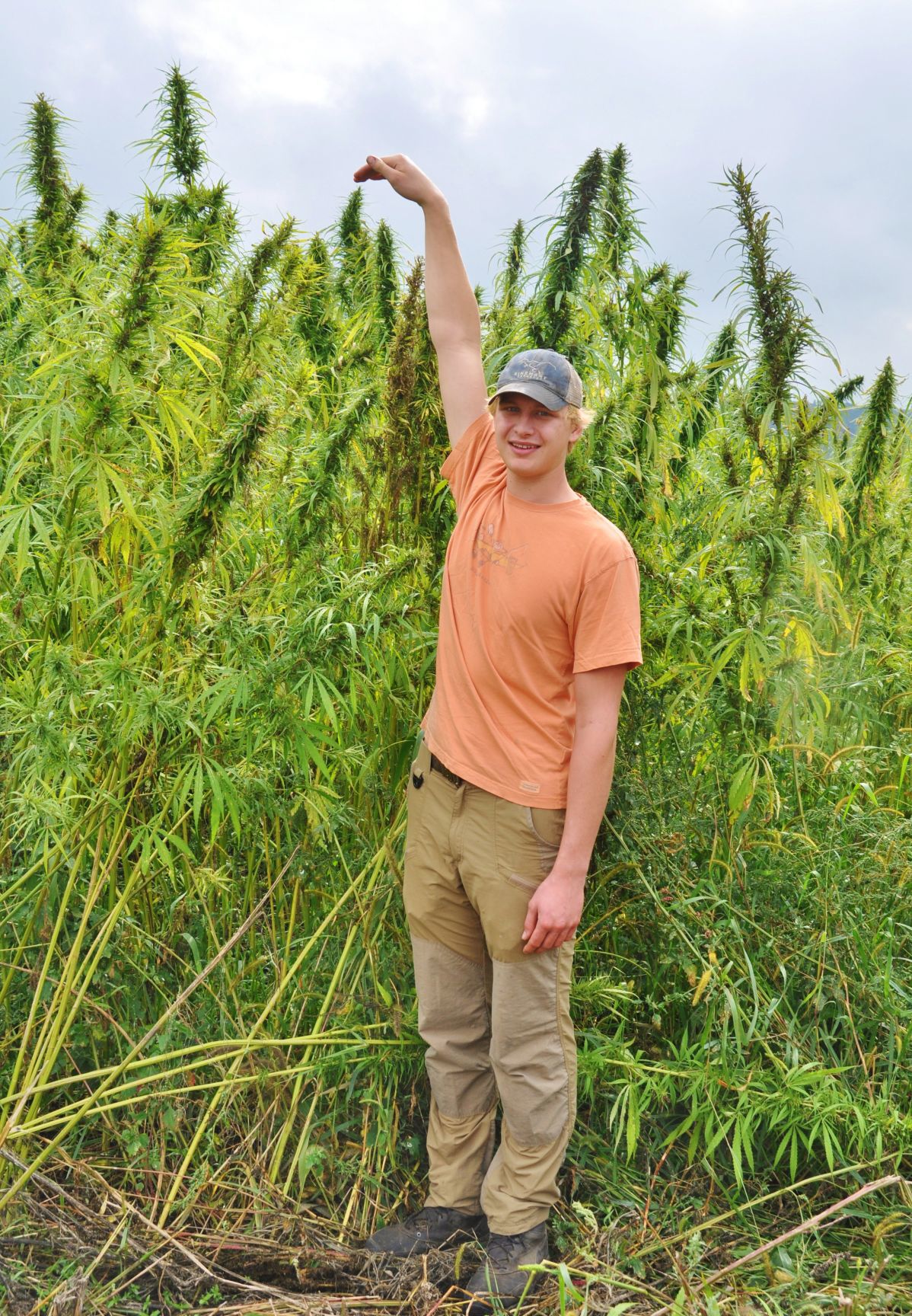 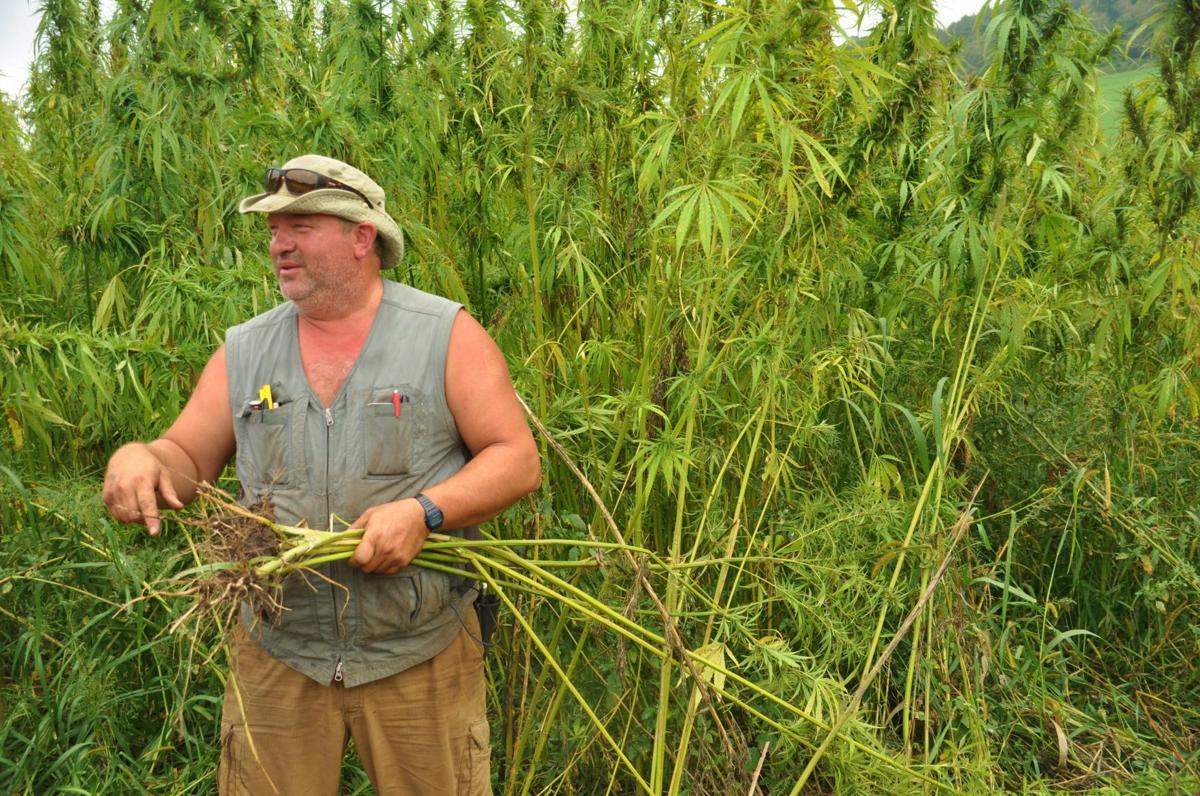 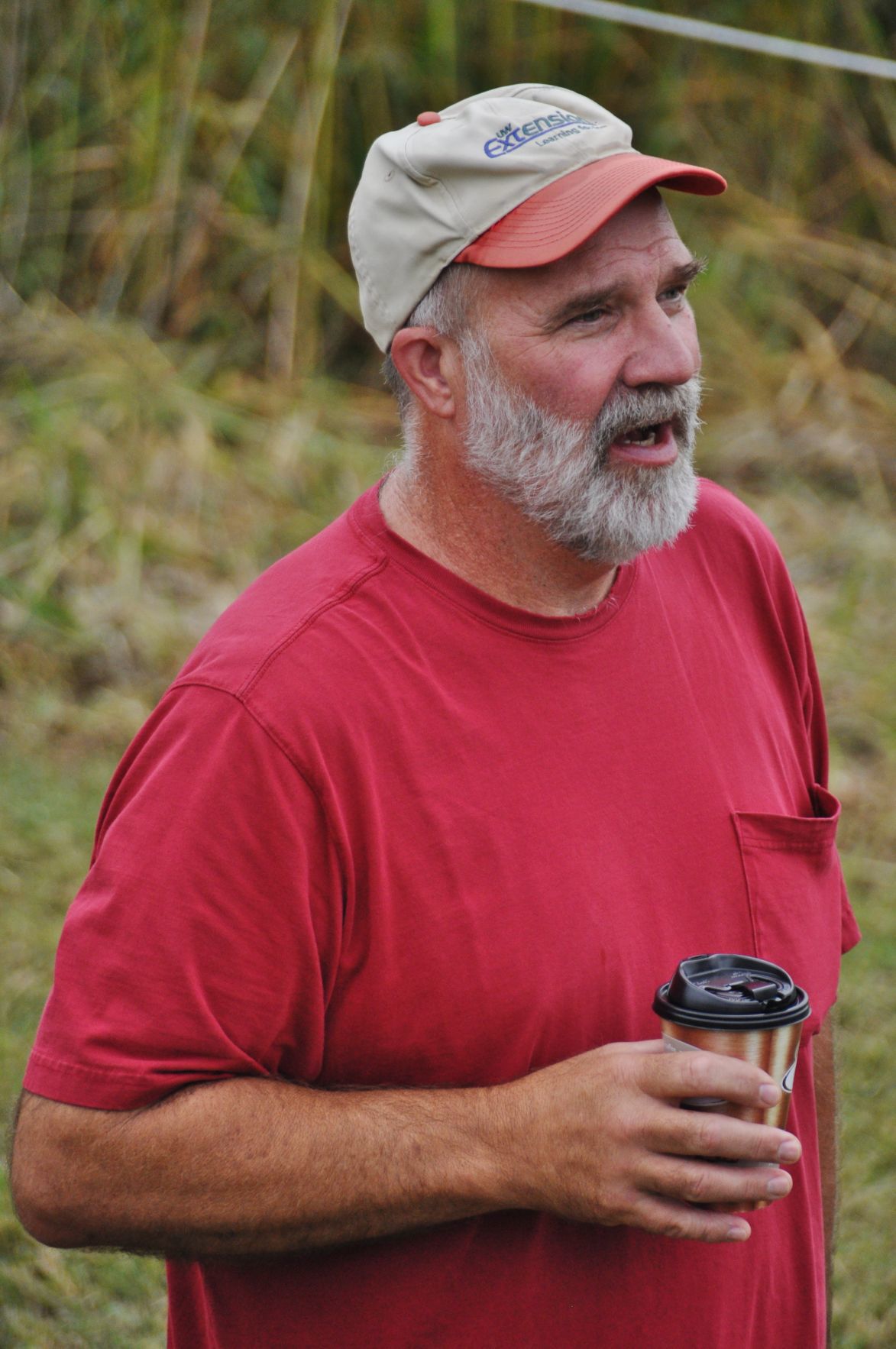 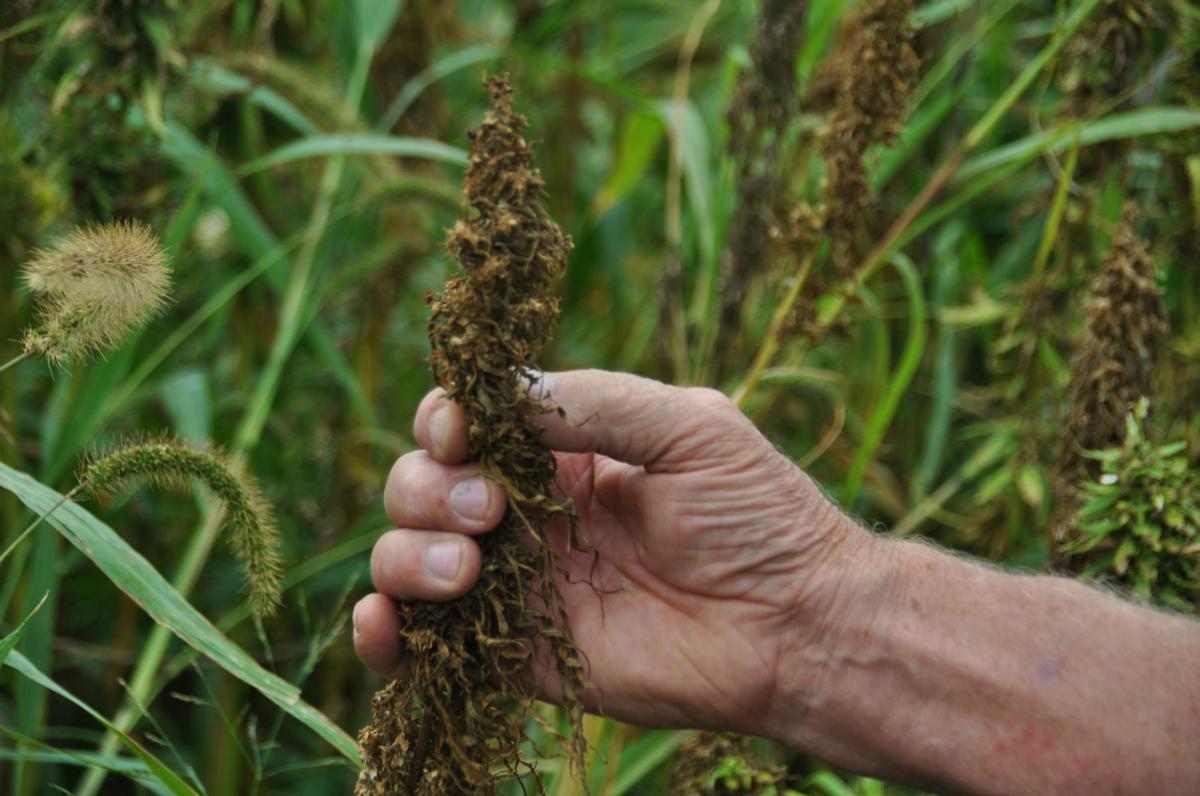 A seed head for industrial hemp will be ready in about a day or two to be harvested. 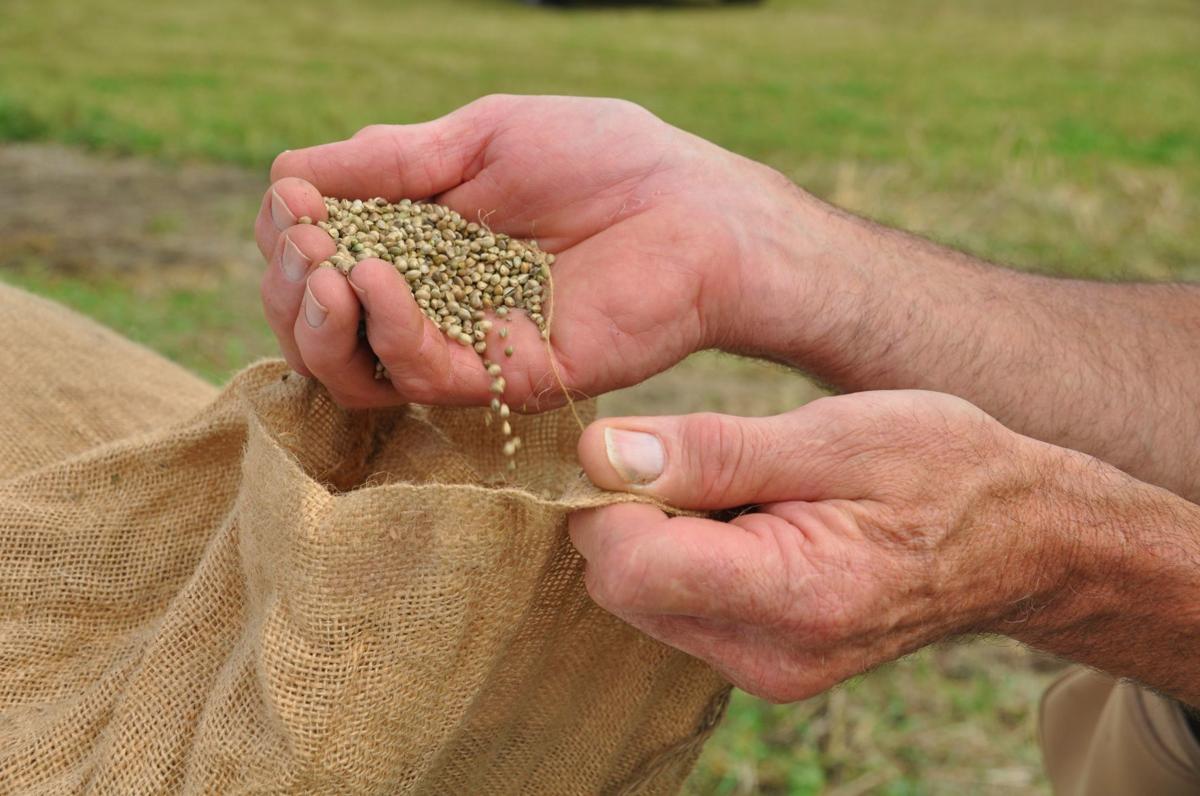 Tiny hemp seeds are planted at 30 pounds to the acre in Joe Bragger's test plot. 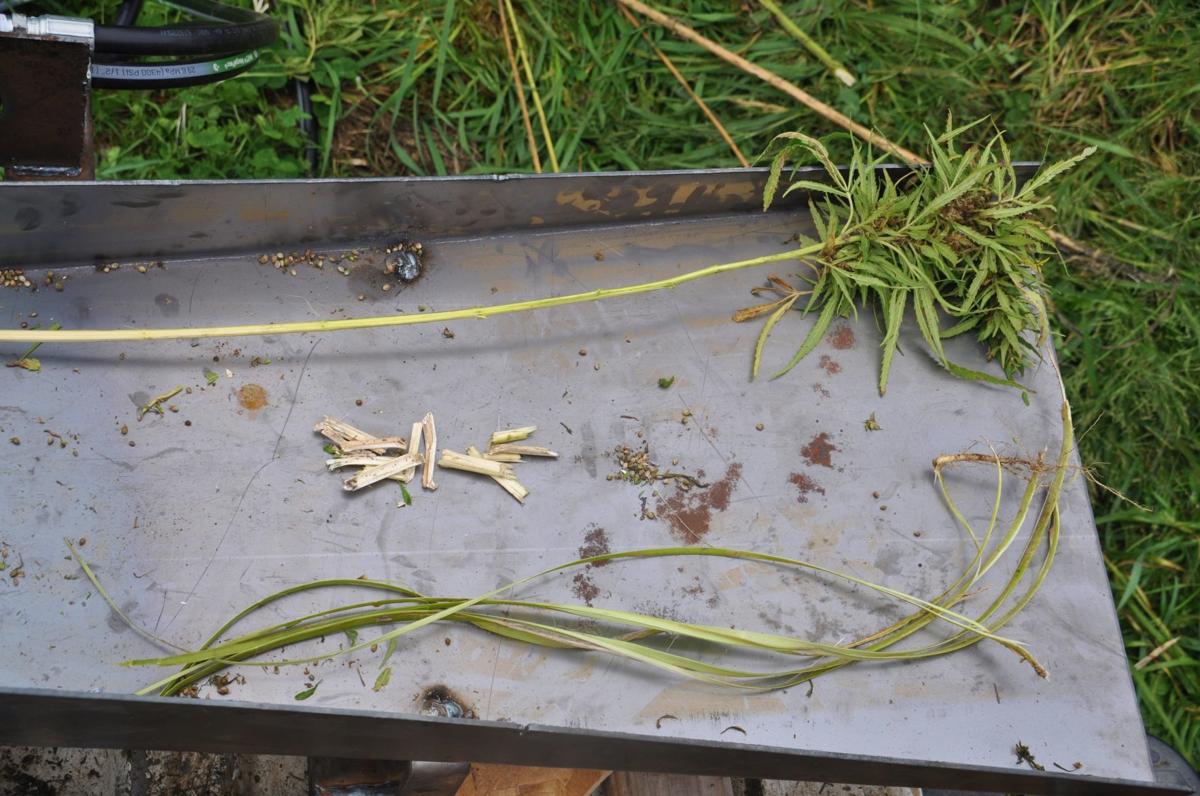 Three different parts of the hemp plant are usable, from top, the flower, the hurd or inner core, and the bast or outer fiber. 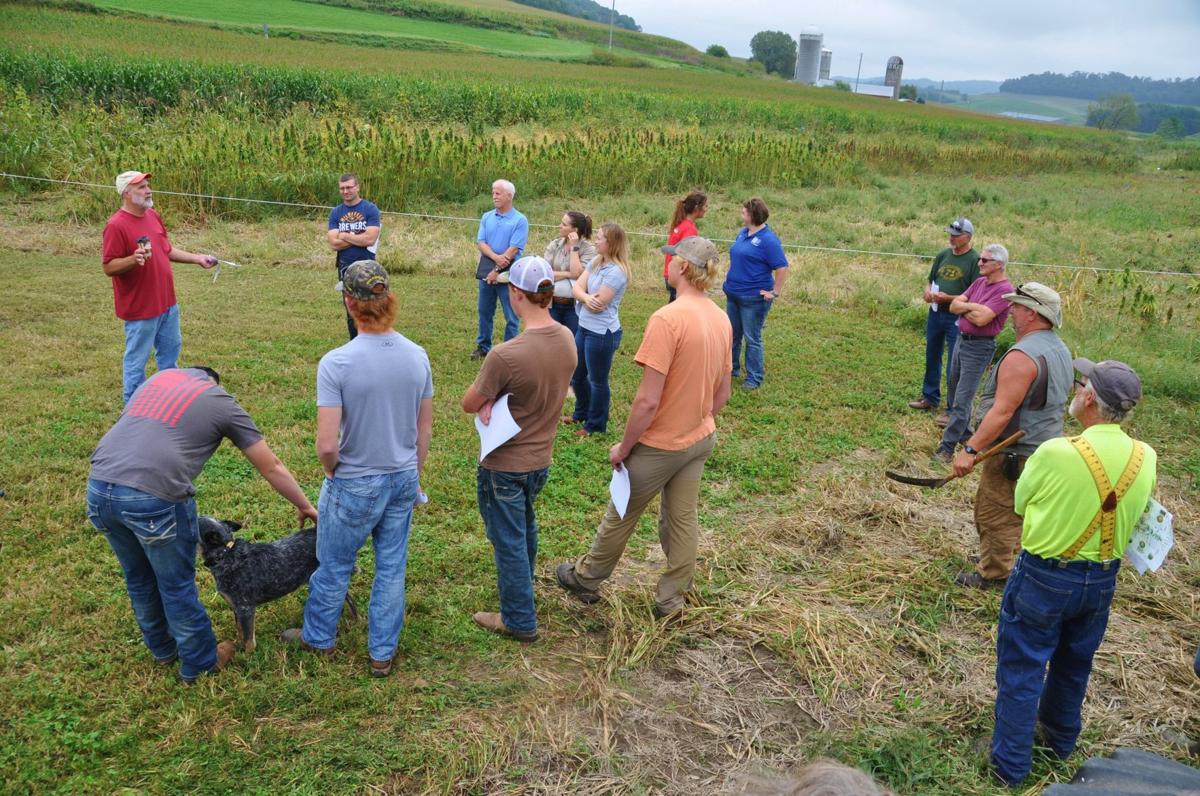 Carl Duley, in red shirt, gives information he had gleaned at a hemp conference held in Cologne, Germany. 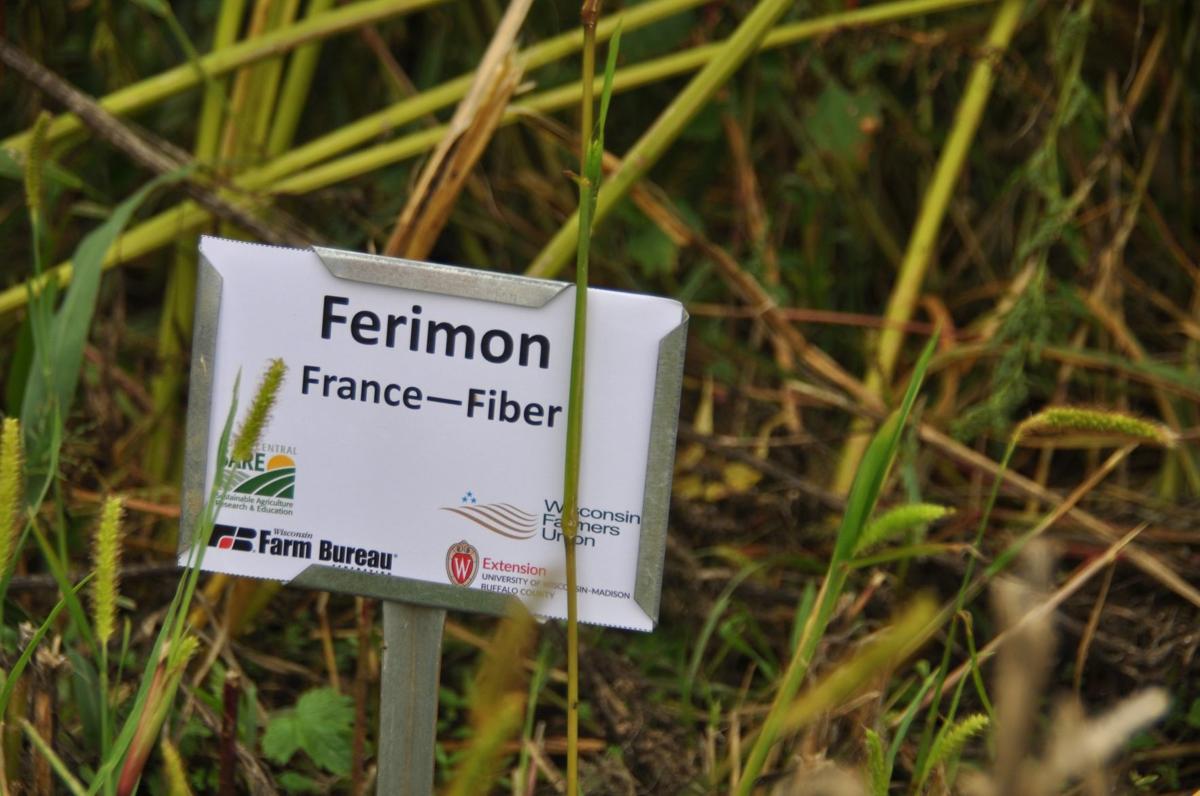 INDEPENDENCE, Wis. – “This is so fun because it’s all new,” Joe Bragger says.

Carl Duley shares Bragger’s enthusiasm. An agent with the University of Wisconsin-Division of Extension in Buffalo County, Duley said he sees lots of potential for the crop. He attended this past June the 16th annual European Industrial Hemp Association conference in Cologne, Germany. He’s been working with Bragger in an experimental plot.

“(But) right now the profit is zero,” Duley said, “I have encouraged way more people to not grow it than to grow it.”

Bragger said, “The nice thing about corn and beans is that someone’s always there to buy it.”

Marketing industrial hemp isn’t possible because the 2018 farm bill has not been implemented – although imported hemp products are legal to sell.

Having a plot of an unmarketable crop is expensive, Bragger said.

“(But) learning costs money no matter what, if you’re going to school or what you are doing,” he said.

And there’s plenty of opportunity for innovation and market development, Duley said.

Industrial hemp has two fibers in the stem. The outer fiber is called the bast; it’s the one that is most common. Its heyday was during World War II when it was used for rope; it’s still considered the best material because it doesn’t rot. Unfortunately it costs more to produce than polyester so it’s no longer a popular choice. It is used for clothing in other parts of the world due to a soft texture similar to rayon.

The inside fiber is called the hurd. The hurd is not a good value, although Duley said he thinks there’s lots of potential for development. It can be made into wood pellets for burning and is absorbent for animal bedding. It has an excellent insulation value and can be made into hempcrete, a bio-composite that’s lightweight but makes strong building blocks for building and insulation. It could be a source of animal feed, but the U.S. Food and Drug Administration has not approved it for that use.

Bragger’s plot included seed from Canada, Ukraine and France. He prepared the field by making two passes with glyphosate before seeding. Because hemp likes warm weather he seeded June 10 with a drill. It took two to three days for emergence. Industrial hemp doesn’t like wet feet, but it will do well on marginal soils. There are no chemicals approved for use on hemp.

Industrial hemp can cross-pollinate with the cannabidiol – CBD – variety and with wild hemp, although it’s not likely because they flower at different times. Duley recommends fields be at least 3 miles away from each other.

By law the hemp is tested for tetrahydrocannabinol or THC, the element that makes it psychoactive. If industrial hemp has a level of more than .32 percent it must be destroyed. Duley said the Wisconsin Department of Agriculture, Trade and Consumer Protection has been cooperative about testing; it’s hired more people to be timely.

In addition to the sampling there are permits needed for transporting plants. Duley recently took some plants to an agricultural show. He ensured they had been tested for THC and carried paperwork with him to show they were legal.

“There is so much to remember,” Bragger said. “It was a big deal to get it passed in Wisconsin. They have been cautious.”

Three products can be harvested from the hemp – the bast, the hurd and the seeds. Short varieties can be taken straight with a combine but the taller ones need to be cut in a windrow. Harvesting seeds can be a mess. The fiber can wrap around combine bearings making the combine prone to fires. Air needs to be on the harvested seeds within two hours. They spoil rapidly and need to be dried to 10 percent and kept there. The drying requires mild heat with lots of air.

The remaining stem of the hemp needs to go through a retting process where the fiber stays moist but starts to rot so it easily separates. The separation is done by the use of a decorticator machine. Bragger hired a local welder to make one for him based on what he saw on the internet. The stem is fed in the machine, through rollers that crush the stem and peel the hurd from the bast. Because the bast is difficult to dry, it’s prone to causing fires similar to those that result from baling and storing wet hay.

Duley said at one time the largest industrial hemp-processing plant in the country was across the Mississippi River from Buffalo County in Winona, Minnesota. Hemp was a profitable crop for farmers in the area. Duley and Bragger hope it will be again.

LeeAnne Bulman writes about agriculture from her farm overlooking the beautiful Danuser Valley on Wisconsin’s west coast. When not writing, she helps her husband on their small grain and beef farm.