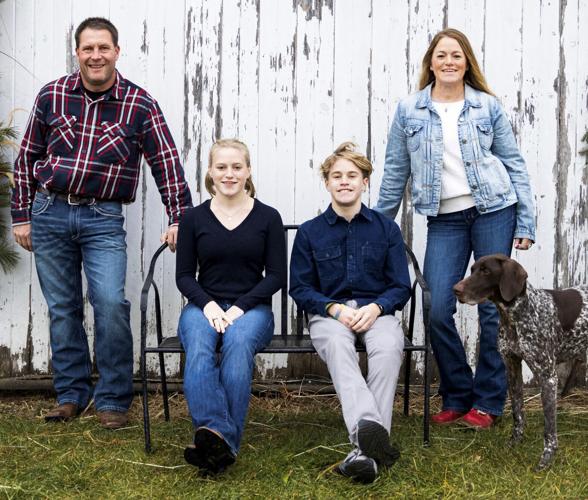 The Atten family farms near Cuba City, Wisconsin. From left are Chris, Cori, Andy and Becky Atten, and their dog, Brick. 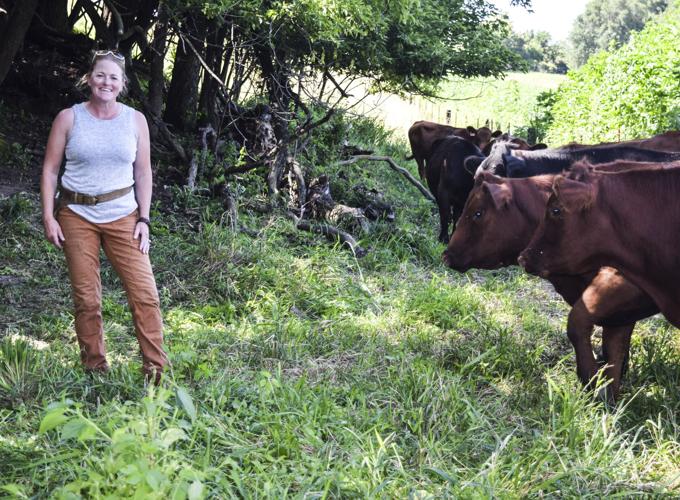 Becky Atten, owner of Grazin' Beef, spends time in the shade with her Angus cattle. 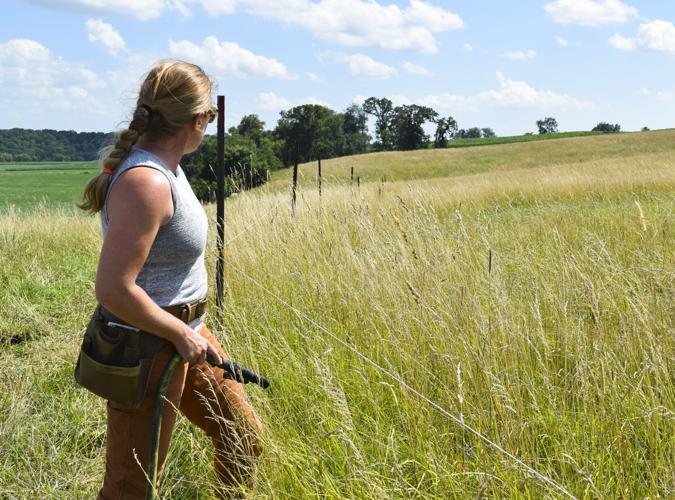 Becky Atten surveys her paddocks. She rotationally grazes cattle on 32 acres, moving the animals every 24 hours. 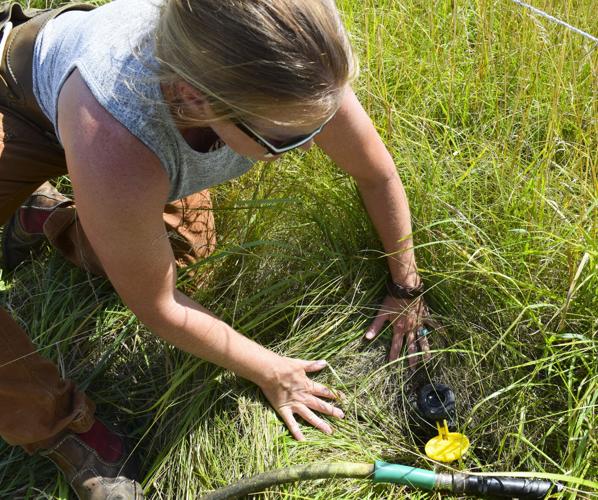 Becky Atten shows a valve on her water line for cattle. Providing a couple of valves per paddock allows her the flexibility to move water tanks to less-trampled areas. 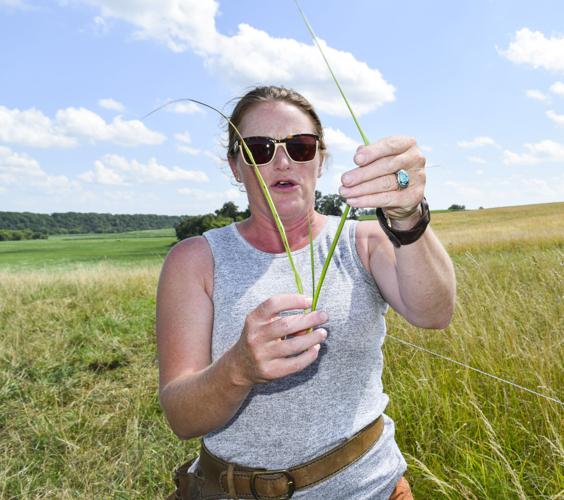 Becky Atten examines grass blades in a paddock. Grazing of too many leaves has a negative effect on the grass root system. 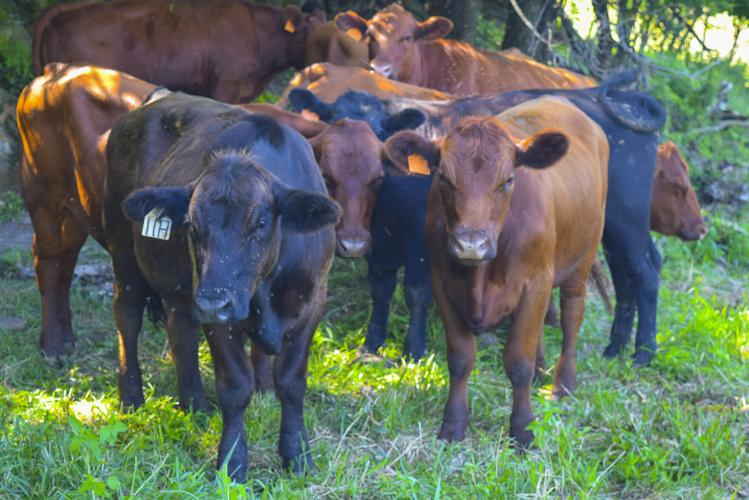 Yearling cattle will be fed at Grazin' Beef until spring 2023. 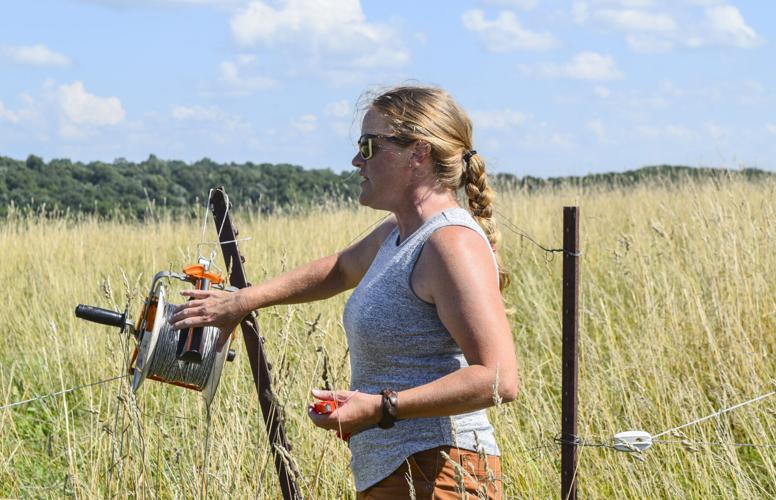 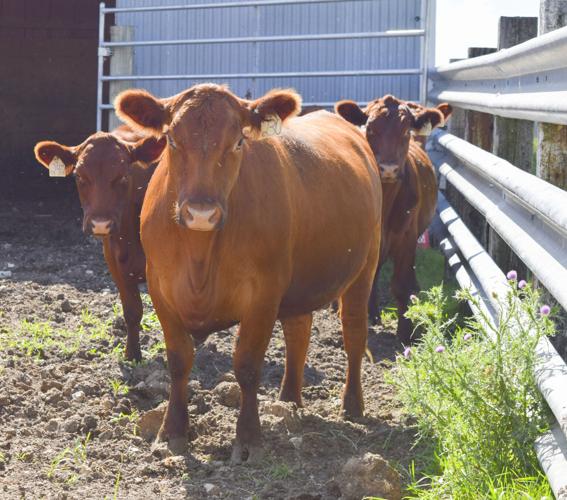 At times when her freezers are full Becky Atten sends a group of fat cattle for sale to the Wisconsin Grass-fed Beef Cooperative. 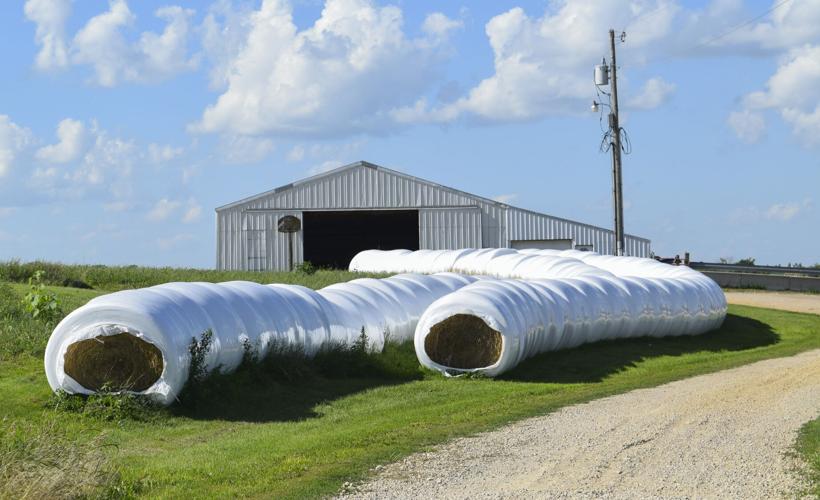 Long tubes of plastic-wrapped hay snake along the landscape at Grazin' Beef. The hay will be fed to cattle during the winter months. 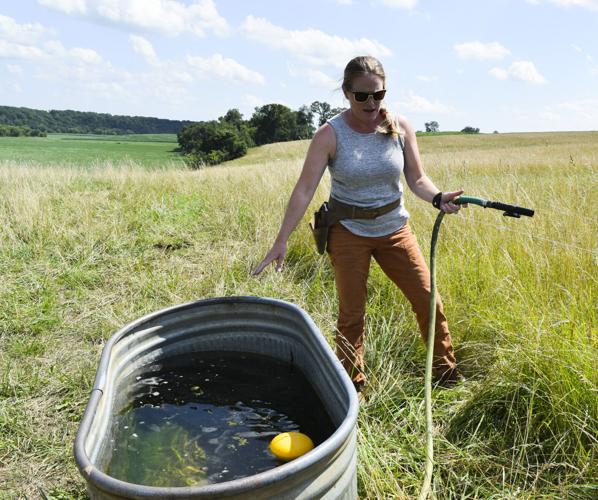 CUBA CITY, Wis. – It all started with a question posted in a private Facebook group of runners, said Becky Atten about her decision to raise grass-fed beef cattle. One of the runners asked where her fellow runners bought grass-fed beef. Many of the group members didn’t know. The few suggestions posted were retail stores in relatively large cities.

Atten said, “I thought to myself, ‘I’m a farmer. I could raise grass-fed beef.’”

So in 2017 she established Grazin’ Beef, a grass-fed cattle operation near Cuba City.

The timing was good. Her two children were old enough that she could devote more time to farming, although she already had been farming with her husband, Chris Atten. Their operation, Hillwood Farms, is a beef-cattle and row-crop operation near Cuba City. He’s also a principal at Atten Babler Commodities.

But she wanted a business of her own into which she could pour her individual interests and passion, she said. Having earned in 2003 a soil-science degree from the University of Wisconsin-Platteville, she understood soil and plants as well as their interactions. She was on the university’s soil-judging team. And having been raised on a beef-cattle and grain farm in northern Illinois she also had experience with cattle.

But what really made the difference for her was a Practical Farmers of Iowa conference that focused on rotational grazing.

“That changed everything for me,” she said. “I realized I could raise cattle and supply my community with nutritious food. Grass-fed beef is simple and authentic. People crave something that’s real – from one farmer and from one process.”

That fall she bought a few open heifers and a bull. The following spring she started rotational grazing on 20 acres. And she developed a watering system that would enable her to supply water to every paddock.

“Water is a limiting factor in rotational grazing,” she said.

She installed a water line that connects to a pump from what had been a dairy farm’s milk house. The 1-inch water line runs on top of the ground underneath her exterior fence lines. By running the water line under fences, she can help prevent it from being trampled by cattle.

She installed a couple of valves for each paddock. She can attach a short hose from a valve to a stock tank each time she moves cattle to a new paddock, she said.

Atten was able in 2019 to expand her grazing operation to 32 acres with assistance from the U.S. Department of Agriculture’s Natural Resources Conservation Service. She worked with Helen Leavenworth, then a soil conservationist at the USDA Service Center in Darlington. Leavenworth now works as a district conservationist in east-central Iowa.

Leavenworth helped Atten apply for funding through the USDA’s Environmental Quality Incentives Program. She was able to use the funding to extend her water line as well as to incorporate a pollinator mix in the new paddocks.

“I enjoyed working with Becky,” Leavenworth said. “We communicated a fair amount about her plan and goals. She was organized and shared thoughts on what she wanted. She also asked questions and understood what the plan entailed.”

In addition to being eligible for funding, Atten said she’s able to earn grazing payments through the program. She moves cattle every 24 hours, which provides enough time for the plants in grazed paddocks to recuperate.

“It also allows time for plant roots to recover,” she said. “Rotational grazing is the foundation of good grass-fed farming.”

Her paddocks primarily consist of brome grass and legumes. She overseeds paddocks with timothy, clover and fescue to provide more diversity but brome grass often outcompetes the other species, she said.

During the winter months she feeds hay to the cattle. Her husband, who maintains a separate herd of Black Angus, raises hay on 20 acres. The Attens share equipment such as their cattle trailer. She credits her husband with being able to start Grazin’ Beef.

In spring 2022 she grazed 20 head of cattle; about half of them were fat cattle. Most had already gone to the butcher by mid-July. The other half are yearlings that will be ready in spring 2023, she said.

Atten raises Red Angus because they’re more tolerant than Black Angus to heat stress, she said. Her Red Angus bull is short in stature and tends to produce offspring that are short as well. Smaller cattle finish better on grass.

Meredith Hannah became acquainted with Atten on the Facebook group of runners. She’s been buying grass-fed beef from Atten since 2020.

“I think grass-fed beef tastes better (than grain-fed beef) and I like to know where it comes from,” Hannah said.

As the economic-development coordinator for Glen Ellyn, Illinois, Hannah said she likes to support small businesses such as Grazin’ Beef.

“Becky refers to herself as a grass farmer and that makes sense,” Hannah said. “Grass is a good food source for cattle and she’s diligent about rotational grazing. The process and the science are fascinating to me.”

Hannah said she appreciates the cooking videos that Atten features on Facebook and Instagram. Atten uses those social-media platforms to tell her story to customers and prospective customers; she provides links to her website. She’s found that people on Instagram are especially interested in what she’s doing.

And it was Instagram that helped spark a friendship between Atten and Leslie Svacina of Cylon Rolling Acres near Deer Park, Wisconsin. Svacina grazes meat goats.

“I met Becky a few years ago at a GrassWorks Conference,” Svacina said. “We were sitting by each other in a direct-marketing workshop and realized we followed each other on Instagram. From there we’ve grown as business colleagues.

“We’ve talked a lot about the importance of building relationships with our community and customer base through various digital communication strategies – such as a website, ecommerce, email marketing and social media.”

To be effective with direct marketing one needs to go beyond one-time transactional marketing, Svacina said. One needs to focus on relationship-building and ongoing customer service.

Both women said they see opportunities for smaller-scale producers of grass-fed livestock. There’s a growing group of consumers – such as those in Atten’s Facebook running group – interested in nutrient-dense protein and locally raised food, as well as in supporting farmers.

But there also are challenges. Atten pointed to a recent consumer survey conducted by the University of Minnesota-College of Food, Agricultural and Natural Resource Sciences. The survey indicated 80 percent of U.S. adult consumers prefer animal-based protein – but plant protein is gaining popularity. Thirty-one percent of the consumers surveyed said they plan to eat more plant protein in the next five years.

“Gen Xers” – a term typically used to describe the generation of Americans born between 1965 and 1980 – indicated the most preference for plant protein at 26 percent, compared to 20 percent across other consumer segments. But younger “Gen Zers” – a term usually given to people born between 1997 and 2012 – expressed the most willingness to pay more for plant-protein options, at 44 percent.

“I believe consumers need to understand that nature is a complex system and a plant-based diet is dependent on row crops,” she said. “That green plant growing in straight rows and making maximum yields isn’t (an) environmentally friendly choice.”

Wisconsin is banding together with five other Midwestern states to promote development of a “clean hydrogen” economy.

MADISON, Wis. – Liz Henry’s continuing dedication to Wisconsin agriculture and the University of Wisconsin-College of Agricultural and Life Sc…

Glenda Gillaspy, new dean of the University of Wisconsin-College of Agricultural and Life Sciences in Madison, recently met with stakeholders …

ASHLAND, Wis. – Quiet pride is most impressive. No loud boasting is needed because its reason is self-evident. We see quiet pride when a team …

Keep smile alive to save children

GLEN HAVEN, Wis. – Whether it’s their Angus breeding stock or the beef sold in their meat shop, the Retallicks of 2K Cattle Enterprises shoot …

Wisconsin Gov. Tony Evers has issued his proclamation for “Wisconsin Farm Safety and Health Week,” a tradition started a few years ago to para…

The Atten family farms near Cuba City, Wisconsin. From left are Chris, Cori, Andy and Becky Atten, and their dog, Brick.

Becky Atten, owner of Grazin' Beef, spends time in the shade with her Angus cattle.

Becky Atten surveys her paddocks. She rotationally grazes cattle on 32 acres, moving the animals every 24 hours.

Becky Atten shows a valve on her water line for cattle. Providing a couple of valves per paddock allows her the flexibility to move water tanks to less-trampled areas.

Becky Atten examines grass blades in a paddock. Grazing of too many leaves has a negative effect on the grass root system.

Yearling cattle will be fed at Grazin' Beef until spring 2023.

At times when her freezers are full Becky Atten sends a group of fat cattle for sale to the Wisconsin Grass-fed Beef Cooperative.

Long tubes of plastic-wrapped hay snake along the landscape at Grazin' Beef. The hay will be fed to cattle during the winter months. 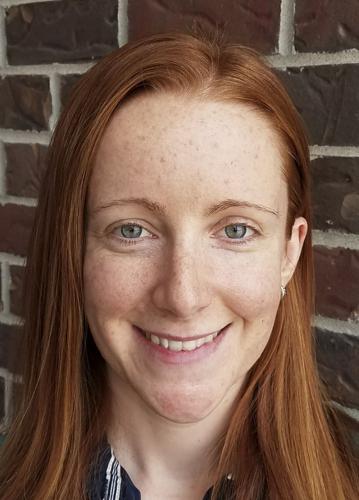 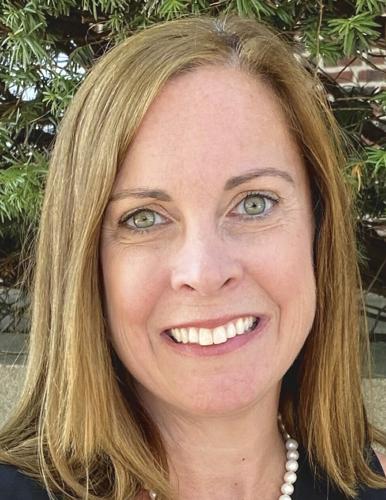