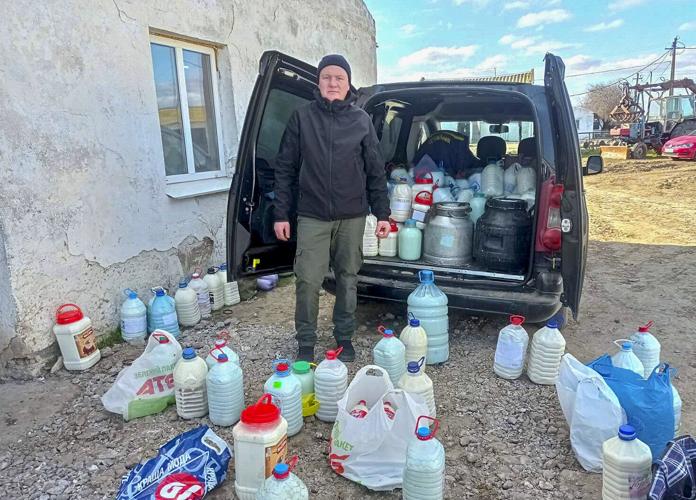 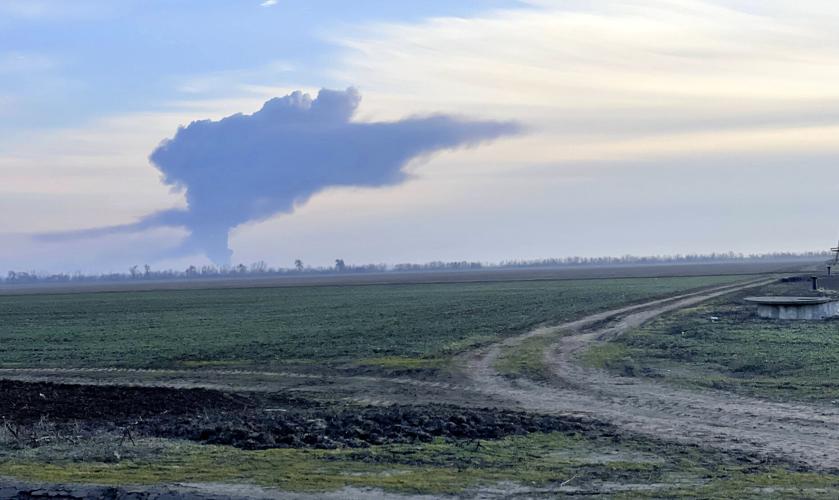 Smoke from bombs and destroyed vehicles in Kherson, Ukraine, can be seen from the Pastushenko farm. 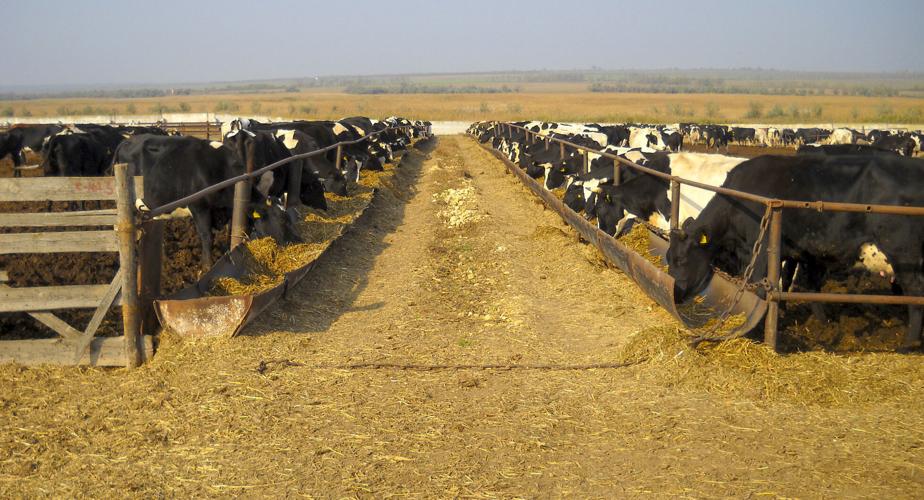 Andrii Pastushenko’s cows stay in the yards during the summer time but are now being slaughtered one by one to feed the farm's staff. 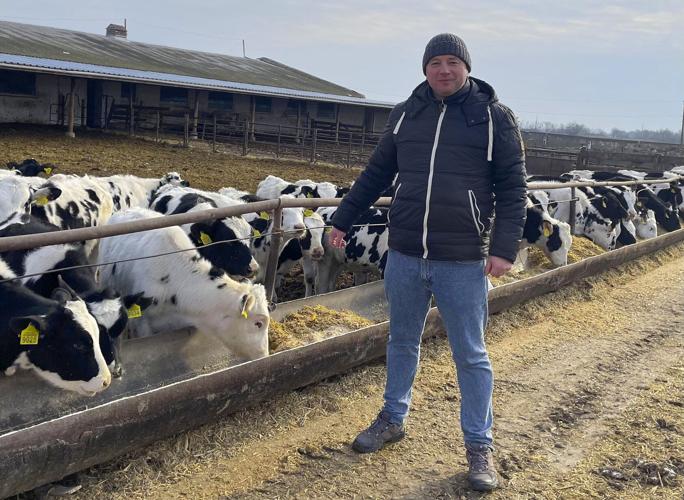 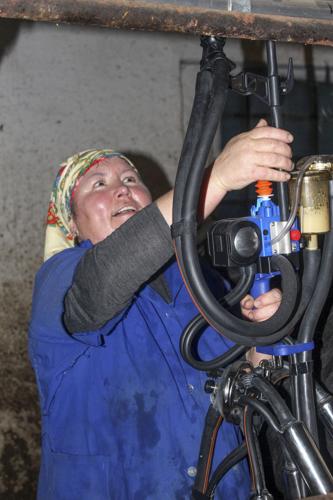 Cows are still being milked twice per day but the milk cannot be sent to the processor because Russian soldiers have occupied the nearby city of Kherson, Ukraine. 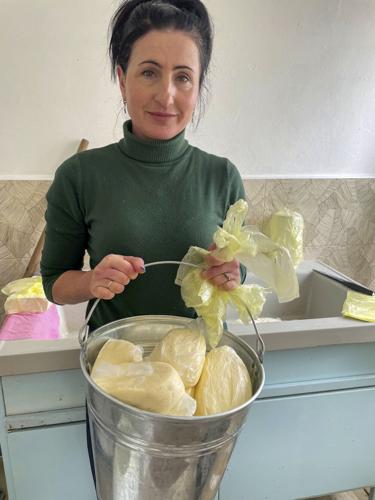 Farm staff make quark and butter on the farm to survive. 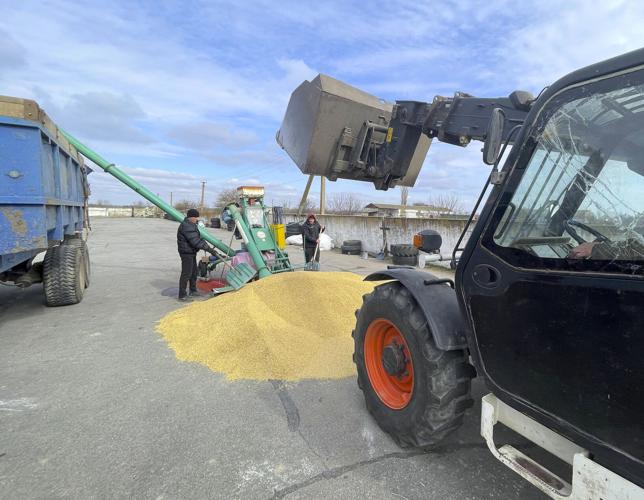 Barley is now being crushed on the farm to make porridge. 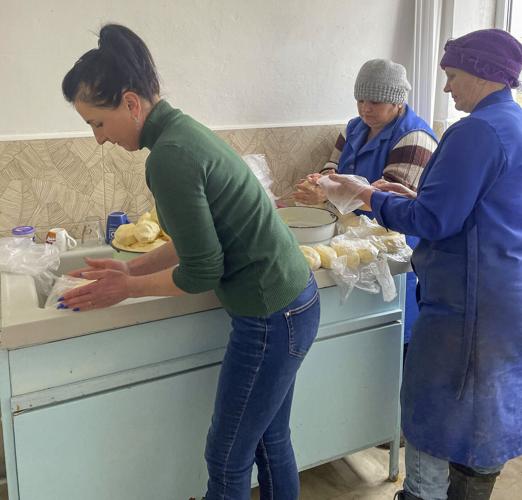 Churning milk into other dairy produce is a daily task for the staff. 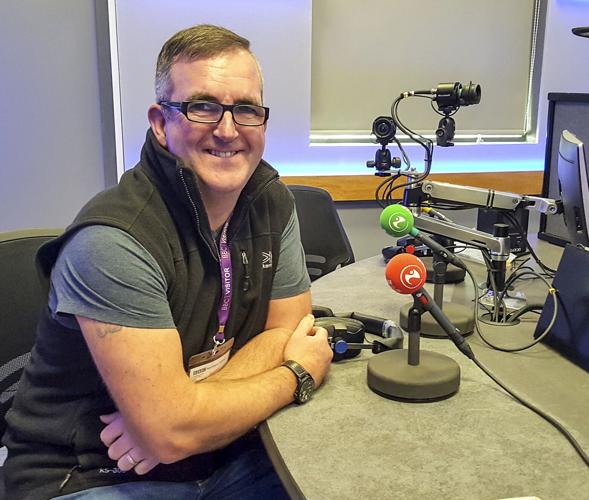 Update as of March 18 – Russian soldiers that had based themselves on the Pastushenko dairy farm near Kherson in Ukraine quickly packed their belongings and left after Ukrainian forces started shelling the nearby airport.

The Kherson airport had been under the control of the Russians but the Ukrainians attacked them, blowing up five Russian helicopters and other equipment in one night.

"On hearing the commotion the soldiers upped and left our farm," Andrii Pastushenko said. "They packed up their stuff within 10 minutes and left. They had been sleeping on straw in a calf house, and had taken a lot of milk and eggs. They also took two of our cars, without paying of course.

"Needless to say they didn't bid me farewell. They just said 'see you soon' but I hope they don't come back."

Sadly the next night the Russian soldiers did come back. This time they arrived in one of the cars stolen from Pastushenko and wanted him to fix some tires.

"I told them to get lost, as the only place that could repair them was in the city, and that they had bombed it," he said.

KHERSON, Ukraine – A Ukrainian dairy farmer trapped on his farm near Kherson is slaughtering his own cows so his family, his staff and local villagers have something to eat.

Andrii Pastushenko, 39, is also turning his grain supply into porridge and the cow’s milk into other dairy products so they all have enough to eat.

Russian soldiers took control of Kherson, in the south of Ukraine, more than a week ago. But brave residents have continued to protest the occupation by charging and chanting at the soldiers.

Pastushenko’s farm is only 20 kilometers south of Kherson; he could see the smoke from bombs and destroyed vehicles bellowing from the city. And then what he feared most, happened. Russian soldiers arrived March 14 to set up a base on the Pastushenko farm – taking over a farm office, two cars and food supplies. The soldiers remained polite, Pastushenko. He said his staff were working in fear but continued to do their jobs.

“The Russian soldiers arrived on my farm yesterday,” Pastushenko said. “Ten of them are here during the day but more arrive at night. They took two cars from my guards and some food. They remain polite but don’t say very much. My Ukraine army know they are here.”

He said for now he must keep the farm going; he is with his 15-year-old son and their staff. His wife and other young son fled to their home town of Zhytomyr in the northwest of the country, 575 kilometers from Kherson. If Pastushenko and his son were to leave, he knows the villagers would slaughter all his animals for food.

Pastushenko is a former university lecturer who taught the German language. He started working at the farm company Dnipro Ltd as an interpreter before becoming a director.

“Back in 2008 a few German investors bought the farm out of bankruptcy and I acted as their interpreter,” he said. “A few months later I became a director of the farm myself.

“I have a wife and two sons. The older son is 15 and studies at the agrarian lyceum in Uman in central Ukraine. He had a vacation before the war started and came to stay at my place in the south. Now it’s impossible to drive away from here.

“My wife, Liudmyla, and younger son, Matvii, 9, are in Zhytomyr, just 100 kilometers from Kyiv. Now I’m trying to evacuate to Germany.”

“Before the war started our cows were giving over 10 tonnes of milk per day or 31.5 litres per cow per day (about 69.5 pounds),” Pastushenko said. “Now we have had to cut their feed as it’s running out. We only feed corn silage and alfalfa to the cows, and the milk produced has dropped to around 6 tonnes per day.”

During the winter the animals are kept in the barn, but from April to November they stay in open yards. Pastushenko grows corn silage, alfalfa hay, rye silage, barley, corn and barley to feed his animals; he’s needed to buy rapeseed meal, soybean meal, sunflower meal, spent grains, urea, sugar and minerals to complete the ration.

But his feed stocks are running out. And he’s worried the staff won’t be able to go into the fields to prepare for this year’s crop and grass harvests.

“We have about 70 workers,” he said. “Right now everyone stays on the farm and keeps working. The cows are milked twice per day and we paid our workers’ wages on March 1.

“Before the war our milk was sold to the French dairy processor Lactalis in Mykolaiv and we received 45-euro-cents-per-litre payment price.

“In the first five days of the war, a milk truck came from Kherson and picked up 4 tonnes of milk and delivered it to all the city’s hospitals, before distributing the leftovers to the local people.

“Since March 28, Kherson is occupied by the Russians and surrounded. Therefore no cars are allowed in or out. In the first 10 days we gave away milk worth 50,000 euros. Now we are producing our own butter, quark and cream in the barn, and crush our barley supply to make into porridge. We need food as it’s impossible to go out and buy some.

“Now we have someone in every village who comes to the farm and picks up milk and food then distributes it, with the help of the churches.”

“We have our own fodder until harvest, but we don’t know if we will have a harvest. We will need to harvest silage in June for the cows to eat next winter.

“Before the war all areas were fertilized with nitrogen and around 50 hectares of lucerne were drilled. We managed to drill 90 hectares of spring barley during the war.

“We only have one month’s supply of diesel left and we know the Russians are looking for diesel. Seeds of corn and sunflower were paid for in the fall; they should have already been delivered but they have not arrived.”

The war must end soon, he said. But he isn’t very hopeful.

“Russian civilians don’t understand what’s going on here,” he said. “Everything they see on TV is lies. Their propaganda tells them everyone is bad, that there are enemies everywhere, and only the Russians are good and are kissed by God.

“Negative information about Ukraine has been spread in Russia since 2004, when I was still watching Russian channels. The hatred arose and it took 10 years to prepare when Russia attacked us.

“We are not nationalists or fascists. Here in the south, the majority of the people used to speak Russian but less and less are since 2014. Now they try to speak Ukrainian as a matter of principle.

“I can’t leave. I can’t take my son away. We are trapped here. If I leave the hungry people will steal and slaughter the cows and other animals. We do that already, but only one cow every two days because we need meat for my employees and the rest of us.”

In the future he says if the Russians stay in his region and create a people’s republic like in Donetsk or Luhansk – in the southwest corner of Ukraine – he will leave.

“I will leave my house and drive away,” he said. “I will never live and work under occupiers. I am a free and proud person. Everything will be Ukraine. Long live free Ukraine!”

The past months, our nation and the world have watched Russia’s unjust war in Ukraine unfold and progress. I believe for many of us, it is tru…

Map of Ukraine and surrounding area

Farm-machinery companies pull out of Russia

A number of big-name global farm-machinery companies have pulled out their operations in Russia, condemning the country for starting a war wit…

DONETSK, Ukraine – Workers on a farm near Donetsk in the east of Ukraine were forced to run to the bomb shelter March 15 as missiles fired by …

Smoke from bombs and destroyed vehicles in Kherson, Ukraine, can be seen from the Pastushenko farm.

Andrii Pastushenko’s cows stay in the yards during the summer time but are now being slaughtered one by one to feed the farm's staff.

Cows are still being milked twice per day but the milk cannot be sent to the processor because Russian soldiers have occupied the nearby city of Kherson, Ukraine.

Farm staff make quark and butter on the farm to survive.

Barley is now being crushed on the farm to make porridge.

Churning milk into other dairy produce is a daily task for the staff.