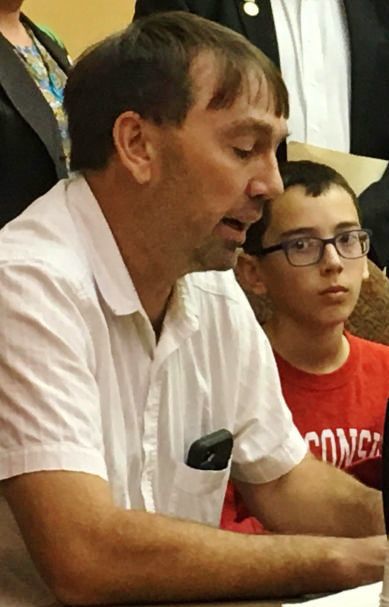 Les Danielson, pictured with his son Henry, testifies in 2017 at a Wisconsin Capitol hearing on a bill that proposes changing Wisconsin’s cooperative law. 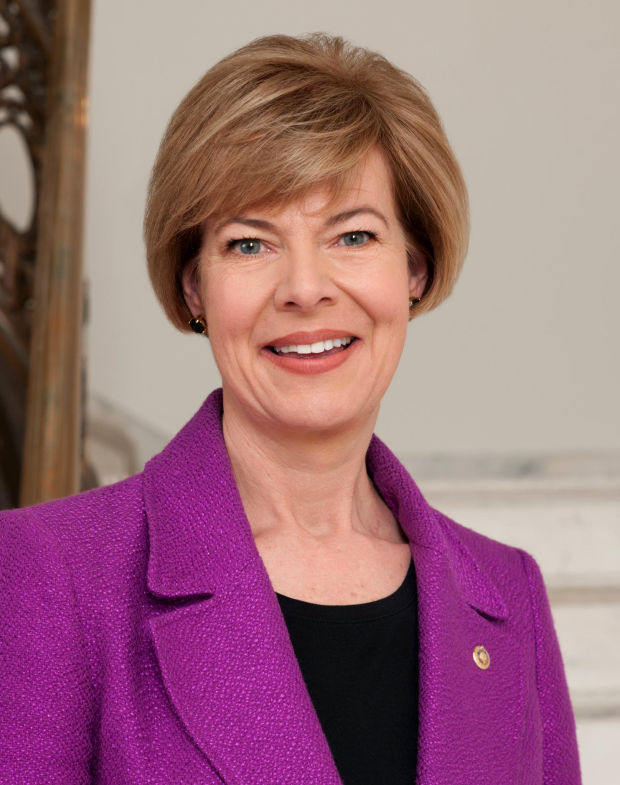 He shared his perspectives on the address and the effect of federal trade and biofuel policies on farmers.

“First I want to thank Sen. Baldwin for inviting me to attend and for emphasizing farming,” he said. “I also appreciate that President Trump mentions farmers. He’s touting trade and a strong economy, but farmers in our area aren’t seeing it.”

“For example we had zero tariffs on agricultural products sold to Mexico (with the North American Free Trade Agreement) and we still have zero tariffs,” he said.

Canada has yet to ratify the agreement but its representatives have agreed to eliminate its Class 6 and 7 milk-pricing programs. That will prevent Canada from dumping milk powder on the global market, Danielson said. But demand for U.S. dairy products won’t be significant because Canada’s population is only about 11 percent the size of the U.S. population.

“We’re not going to see much of an increase in our milk checks,” he said.

Danielson milks 30 cows and farms more than 500 acres of crops. He stores and dries for himself and others about 300,000 bushels of corn and 30,000 bushels of soybeans. Between 80 percent and 90 percent of the corn is sold for ethanol production.

Almost all the soybeans from his facility are loaded into shipping containers in Chippewa Falls, Wisconsin. From there River Country Cooperative ships them to Thailand, Malaysia and other countries in Asia.

The combination of the trade wars and the U.S. Environmental Protection Agency decision to grant several small-refinery biofuel waivers has hurt grain farmers in the past two years, he said. The EPA in August 2019 granted 31 Renewable Fuel Standard small-refinery exemptions. That reduced the amount of biofuel required to enter the U.S fuel supply by exempting 7.4 percent of the total renewable-fuel volume mandate for the 2018 compliance year. That represented about 1.43 billion gallons, according to the U.S. Energy Information Administration.

EPA’s waivers in the past three years have reduced volume requirements by more than 4 billion gallons, significantly reducing corn demand. Geoff Cooper, president and CEO of the Renewable Fuels Association, said at least 15 ethanol plants as of August 2019 had been shuttered or idled since EPA began granting exemptions.

“Waivers are eroding corn demand, with the U.S. Department of Agriculture reducing its estimate of corn use for ethanol by 225 million bushels – equivalent to erasing demand for the entire Michigan corn crop,” Cooper said.

Danielson said, “Trump says ‘I’ve got the farmer’s back,’ but small-refinery exemptions have hurt the ethanol industry. I don’t know how farmers can square that.”

In the same week that Trump touted a strong economy, the USDA announced a third round of Market Facilitation Program payments to farmers totaling $3.4 billion.

The Market Facilitation Program has been beneficial for farmers, but has cost U.S. taxpayers more than $20 billion.

The first round of trade assistance totaled more than $8 billion. The second round, as of Jan. 6, 2020, provided about $11 billion in support, according to the American Farm Bureau Federation.

He doesn’t expect farmers will continue to receive that level of assistance.

In the Phase One agreement China pledged to purchase at least an additional $12.5 billion worth of agricultural goods in 2020, and at least $19.5 billion more than the 2017 level of $24 billion in 2021, according to Reuters. But Chinese officials also said the country would buy based on market conditions.

U.S. soybeans for example will need to be market-competitive with other countries. Danielson said after the Phase One agreement was signed new-crop soybean prices on the Chicago Board of Trade declined by more than 60 cents per bushel.

Baldwin said, “President Trump’s trade wars have hurt Wisconsin’s economy. More than 1,900 dairy farms have gone out of business since he took office. After his State of the Union address, it’s clear he doesn’t understand the challenges farmers like Les are facing as a direct result of his trade policies. President Trump must do better for farmers and start delivering results before it’s too late.”

Visit youtube.com and search for "Zlz5sgRj6r4" to see a video from Danielson shared on Baldwin's Youtube channel.