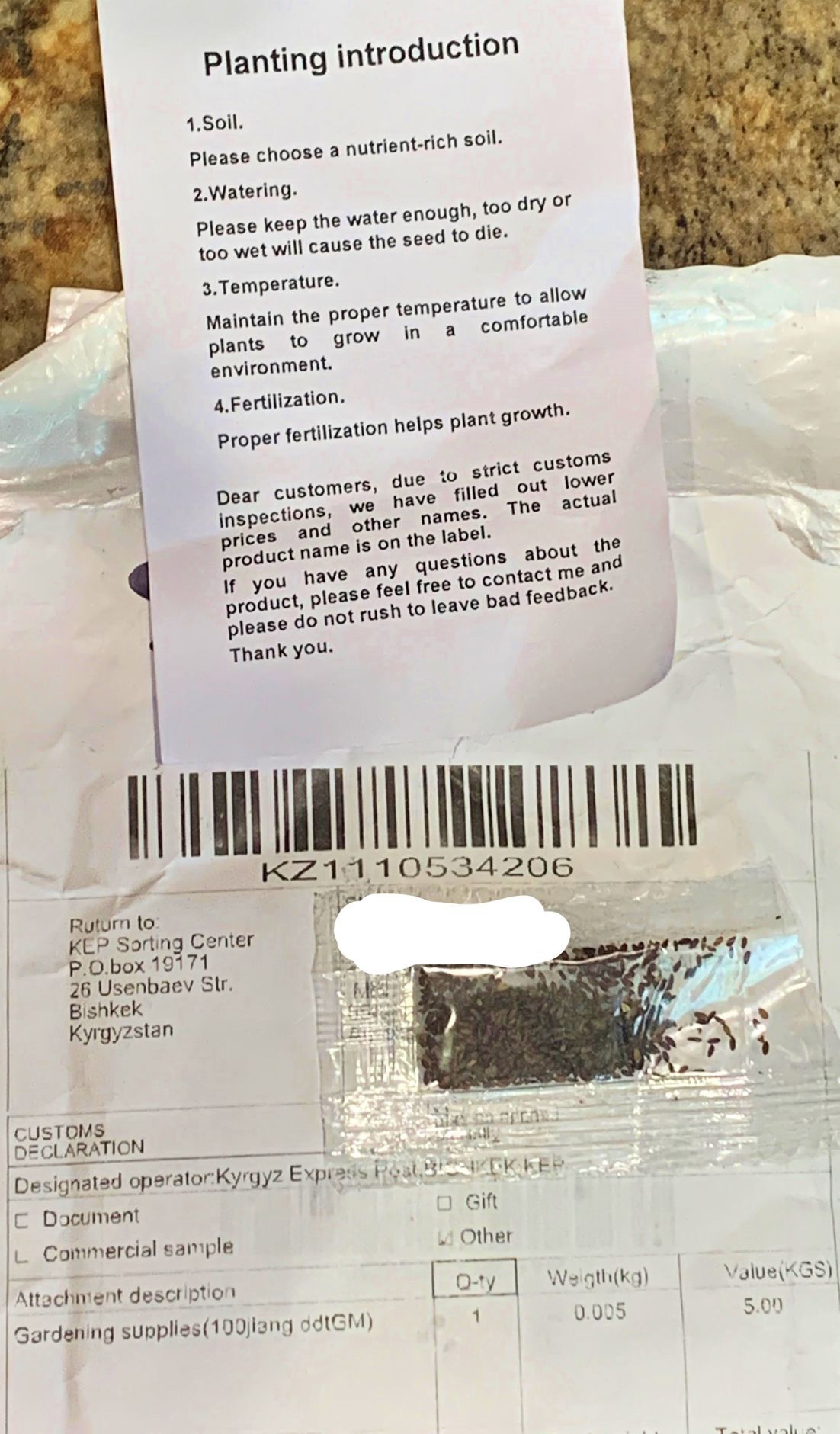 A suspicious package of seeds is being held by the Minnesota Department of Agriculture. This package indicates it was sent from Kyrgyzstan.

A suspicious package of seeds is being held by the Minnesota Department of Agriculture. This package indicates it was sent from Kyrgyzstan.

The American Seed Trade Association is coordinating with the U.S. Department of Agriculture’s Animal and Plant Health Inspection Service along with state departments of agriculture to determine the type and origin of the seeds that have illegally entered the country.

“If you receive unsolicited seeds don’t open the package or plant the seeds,” the American Seed Trade Association stated. “Limit your contact with the seed package and immediately contact your state plant-regulatory official or the Animal and Plant Health Inspection Service state plant-health director. Seeds of unknown origin may constitute agricultural smuggling, be invasive, (and) introduce pathogens, toxins, or plant and animal diseases. They could pose a threat to plant, animal and human health.”

The Animal and Plant Health Inspection Service is working with the U.S. Department of Homeland Security’s Customs and Border Protection, other federal agencies and state departments of agriculture to investigate the situation.

The Animal and Plant Health Inspection Service stated, “At this time we don’t have any evidence indicating this is something other than a ‘brushing scam’ where people receive unsolicited items from a seller who then posts false customer reviews to boost sales. USDA is currently collecting seed packages from recipients and will test their contents and determine if they contain anything that could be of concern to U.S. agriculture or the environment.”

Allen Sommerfield, communications manager for the Minnesota agriculture department, said, “We’ve been asked to ship the packages to the USDA for identification and destruction. It appears there are a variety of seeds being received. Some of the packages have planting instructions. We’ll be working with federal officials on tracing the seeds to a source.”

Katie Boyer, public information officer for the Ohio agriculture department, said her department is asking people to keep seed packages until the department receives further guidance from the USDA.

“USDA is working with the Ohio Department of Agriculture and other state departments of agriculture to determine from where the seeds are being sent,” she said. “We don’t know the reason for the shipments. Our focus is on assisting with the USDA’s investigation and mitigating the risk to Ohio agriculture and our environment from a noxious-weed, invasive-plant and plant-disease perspective.”

The Iowa Department of Agriculture and Land Stewardship is advising recipients of such seed packages to not open the package, plant the seed or attempt to destroy it. The Iowa department or the Animal Plant Health Inspection Service will collect, analyze and properly destroy the seeds, it stated.

“Unlabeled seeds and seeds from unknown origins should never be planted,” the Iowa agriculture department stated. “They pose the risk of introducing an invasive plant species or seed-borne diseases that don’t currently exist in the United States.”

The Wisconsin agriculture department provides advice to anyone who receives a suspicious package.

1. Don’t plant or throw away the seeds.

2. If the seeds are in sealed packaging don’t open the package. If possible retain the original packaging because it may be useful in the investigation of the issue.

3. Report the seeds to the Wisconsin Department of Agriculture, Trade and Consumer Protection using the online form.

After completing the form retain the seeds and packaging, including the mailing label, until the Wisconsin Department of Agriculture, Trade and Consumer Protection, or the Animal and Plant Health Inspection Services, contacts you with further instructions.

All foreign seeds shipped to the United States should have a phytosanitary certificate, which guarantees seeds meet import requirements. Unsolicited seeds could be invasive species, contain noxious weeds, could introduce diseases to local plants or could be harmful to livestock, the Wisconsin agriculture department stated. Invasive species and noxious weeds can displace native plants and increase costs of food production.

Visit datcp.wi.gov and click on the "unsolicited seeds" tab for more information.