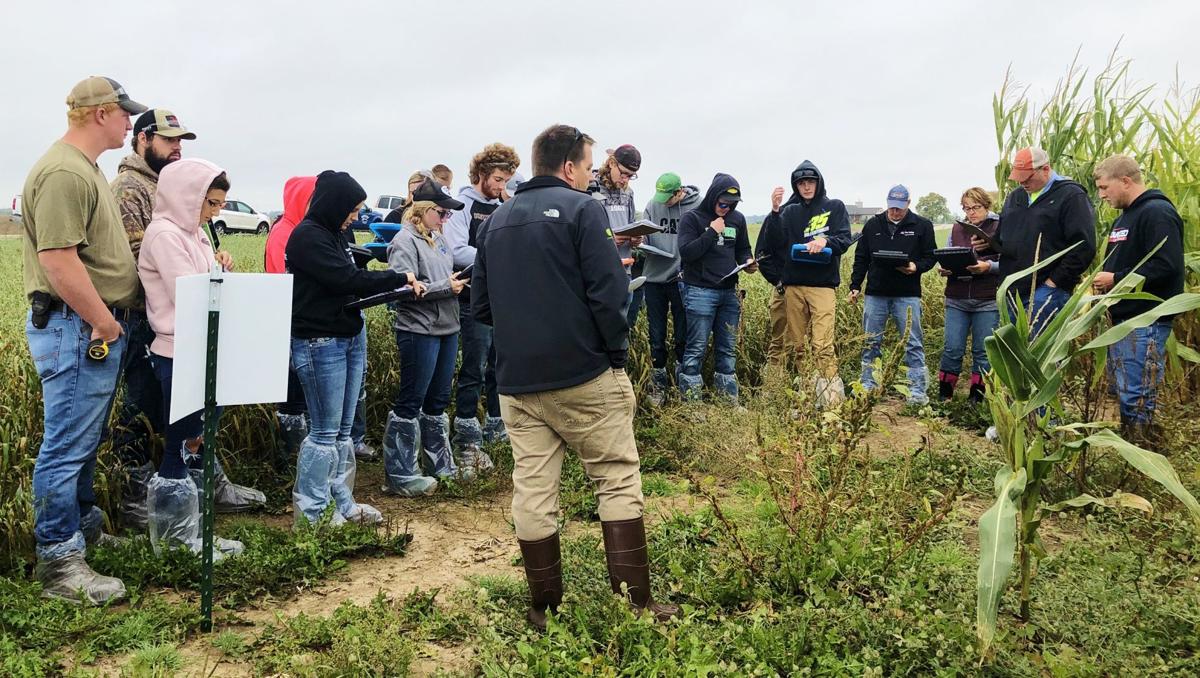 Students from Fox Valley Technical College visit trial plots in Calumet County, Wisconsin, to learn about nutrient management as well as how to conduct stand counts and yield estimates. The Calumet County Agricultural Stewardship Alliance wants the public to be involved in learning about nutrient management and other conservation practices, says John Vandenboom, who leads the farmer-led watershed-protection group. 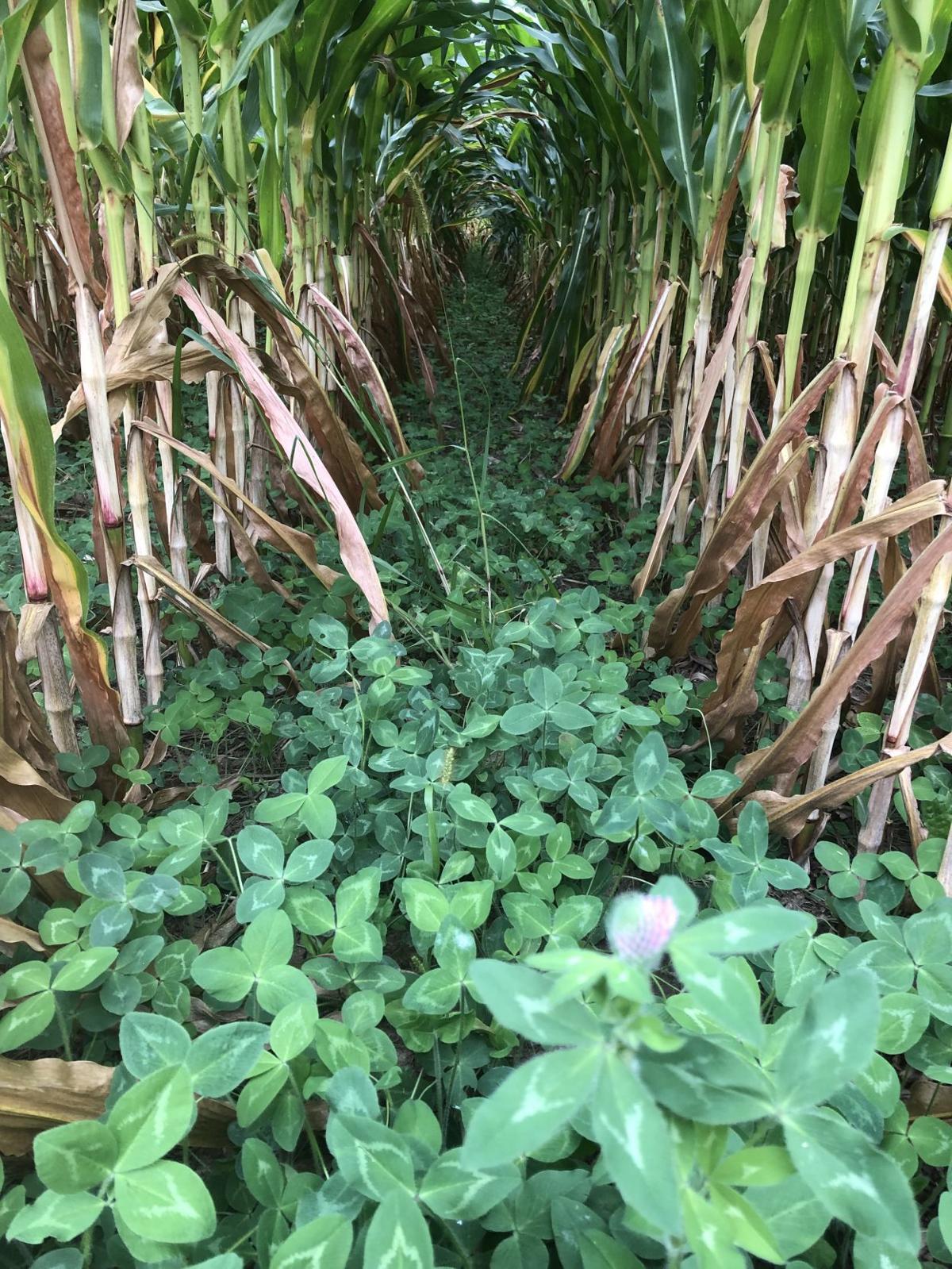 Students from Fox Valley Technical College visit trial plots in Calumet County, Wisconsin, to learn about nutrient management as well as how to conduct stand counts and yield estimates. The Calumet County Agricultural Stewardship Alliance wants the public to be involved in learning about nutrient management and other conservation practices, says John Vandenboom, who leads the farmer-led watershed-protection group.

CALUMET COUNTY, Wis. – The Calumet County Agricultural Stewardship Alliance is a first-time recipient of the Producer-Led Watershed Protection Grant program. The Calumet County group was formed a little more than a year ago by a group of farmers focused on the water quality of Pipe Creek, which drains into Lake Winnebago from the east. The farmers also are focused on the south branch of the Manitowoc River.

John Vandenboom, who works with Holsum Dairies of Hilbert, Wisconsin, leads the alliance. There are currently about seven farmers in the group, with most of them dairy farmers. The board is comprised of four farmers and a non-farmer resident of the town of Stockbridge. Together they’ll work to expand membership to other farmers and the general public through field days and meetings, Vandenboom said.

“We want people to join and see what we’re about,” he said. “We want the public to be involved.”

The alliance was formed partly in response to an ordinance proposed in fall 2018 by the town of Stockbridge, said Barbara Fett, an area resident who serves on the watershed-protection group’s board. The proposal called for prohibiting the spreading of manure on rented land. Excepted from the ordinance were farmers who own the land on which manure is spread.

Some areas of Calumet County have shallow soils – 0 to 20 feet of soil overlaying bedrock – and karst features. The karst areas are susceptible to groundwater contamination. The Calumet County Land and Water Conservation Department in its “Land and Water Resource Management Plan, 2020-2029” defines karst as “landform features formed on the land surface and underground in fractured limestone or dolomite bedrock. The features are formed by rainwater and snowmelt running through the fractures, dissolving and enlarging them. Karst features include sinkholes, caves and disappearing streams.”

Farmers in the alliance want to reduce the potential for groundwater contamination as well as surface runoff, Vandenboom said, by testing and demonstrating different types of manure application, pre-tillage practices and cover crops.

The farmer group is working with the Calumet County Land and Water Conservation Department on proper nutrient handling. With the department and possibly a third-party water-testing company, they plan to conduct baseline testing of wells that are at most risk for contamination by nitrates and bacteria. The Calumet alliance will use some of its $7,500 producer-led grant for establishing the well-testing program.

Anthony Reali, a conservationist with the Calumet County Land and Water Conservation Department, is working with the farmer group. The group as well as a newly formed demonstration-farm network – comprised of participating farmers from the Wisconsin counties of Calumet, Manitowoc, Sheboygan and Fond du Lac – will be learning from each other about manure-handling methods and low-disturbance manure application on growing crops, he said.

Amber O’Brien, agriculture educator for the University of Wisconsin-Division of Extension, serves as outreach and education adviser to the Calumet County Agricultural Stewardship Alliance. She’ll work with the group on coordinating field days and other educational programs.

One of the alliance’s subcommittees will be focused on the baseline testing of wells. In cases where a well would be at greatest risk for contamination there will be efforts to focus on conservation-farming practices in surrounding areas. That will include no-till and the planting of cover crops.

The Calumet County Agricultural Stewardship Alliance is one of 27 farmer-led groups that recently were awarded funding by the Wisconsin Department of Agriculture, Trade and Consumer Protection. The groups are receiving $750,000 appropriated in the state budget for 2020. The recent round of grant awards is the fifth since funding was made available in the 2015-2017 state budget.

Grants range from $7,500 to $40,000 for conservation-practice incentives, education and outreach, and water-quality testing and monitoring efforts. All projects are led by farmers in collaboration with local partner agencies and organizations to increase conservation activities in their watersheds. The emphasis is on innovation and practices not already covered by other state and federal programs. The intent is that participating farmers will work with other farmers to help them adopt conservation practices by offering incentives, and through education and outreach activities, according to the Wisconsin Department of Agriculture, Trade and Consumer Protection.

Producer-led watershed protection groups are implementing conservation practices around the state of Wisconsin. Wisconsin's latest round of Pr…