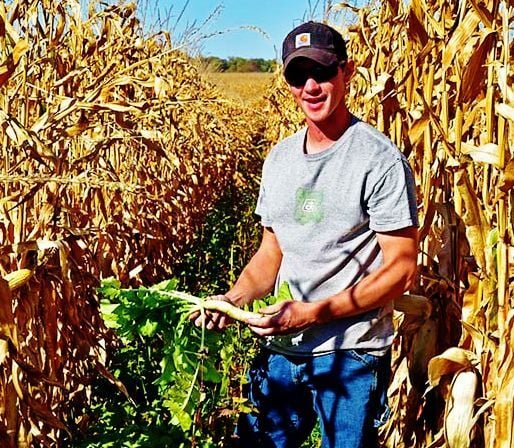 Aarik Deering farms near Postville, Iowa. He will use his cover crops as winter forage for cattle.

Summer interseeding may be a good cover-crop strategy for shorter growing seasons. That’s the finding from a soil-health demonstration project in northern Iowa. Interseeding enables cover crops to grow and take root prior to corn canopy. After canopy the cover crop goes dormant due to being shaded. It then regrows after corn harvest.

Fifteen producers who struggled for years to consistently establish fall-seeded cover crops are working with the U.S. Department of Agriculture’s Natural Resources Conservation Service. They’re interseeding cover crops at the V4 to V7 corn-growth stage, which typically occurs in June in northern Iowa.

Two participants also interseeded 60-inch cornrows through the trial. Brady Kruger of Waukon, Iowa, planted 60-inch twin rows at the same population as his 30-inch rows. The difference in growth was substantial, he said.

“I really enjoyed walking the 60-inch plot throughout the summer and seeing how cover-crop species performed much better when given more sunlight,” he said. “The corn yielded about the same as the rest of the farm so I was pleased considering how dry August was.”

The trials revealed not all seeding methods provided equal results.

“Farmers who broadcast the cover crop seemed less satisfied,” he said. “They had issues with growth consistency and overall delayed growth, leading to less biomass.”

The USDA awarded the Allamakee Soil and Water Conservation District a three-year, $236,000 Conservation Innovation Grant to lead, manage and analyze a series of field-based trials.

CRIVITZ, Wis. – Joseph and Ashley Dudkiewicz have a strong conservation ethic in addition to business acumen, Scott Reuss says. That’s why he …

What exactly is the relationship between soil nitrogen, corn yield and nitrogen loss? Most farmers would be forgiven for assuming a straightfo…

Honey-bee health has been on the decline for two decades, with U.S. and Canadian beekeepers losing between 25 percent to 40 percent of their c…

The prices one can receive from growing organic grain have increasingly attracted more farmers. Organic corn can fetch two to three times the …

Aarik Deering farms near Postville, Iowa. He will use his cover crops as winter forage for cattle.