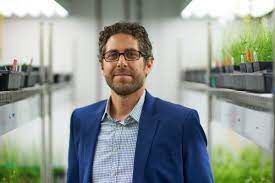 Keith Slotkin and his research team gain new understanding about how silencing of new and foreign genetic material is triggered in plants. Slotkin is a member of the Donald Danforth Plant Science Center, and an associate professor of biological sciences at the University of Missouri-Columbia.

Crop improvement often involves the transfer of genetic material from one organism to another to produce a valuable trait. Some examples of crops with “transgenes” include disease-resistant cotton and beta-carotene-enhanced golden rice. But when foreign deoxyribonucleic acid – DNA – is introduced into a host organism, a natural defensive response in plants is to repress or silence the expression of the unfamiliar genetic material. “Silencing,” a process known to involve DNA methylation, is a multimillion-dollar problem in the global crop-improvement industry.

Research led by Keith Slotkin, a member of the Donald Danforth Plant Science Center and an associate professor in the division of biological sciences at the University of Missouri-Columbia, has established a new understanding about how silencing of new and foreign genetic material is triggered in plants.

“Gene silencing is a key bottleneck that’s inhibiting plant improvement,” Slotkin said. “No matter what new trait plant biologists work on, they’re going to have to fight against gene silencing.”

Normally breeders must start with thousands of plants to identify the few that express, instead of repress, a trait of interest. By discovering how and why DNA methylation occurs, crop breeders may be able to avoid silencing of the trait from the outset.

“One day we could start with three plants instead of thousands,” Slotkin said. “All of the time and money that’s usually put into producing a crop could be reduced.”

Another major advancement of the work by Slotkin and his team was the establishment of a new model as to how gene silencing is initiated. One conventional theory in the field proposes that a critical protein called ‘RNA Polymerase V’ is present all across the genome and surveils different regions of genetic material to test for regions that need silencing. Once RNA Polymerase V identifies a gene region to silence, DNA methylation starts.

The methods used by the Slotkin team were just as valuable as their findings – the researchers overcame technical hurdles in the process. For example gene silencing is typically studied as a cycle rather than how it starts. Consequently the researchers needed to do everything in the first generation of transgenic plants to watch the initiation of the process.

“That’s a huge challenge,” Slotkin said. “We plant thousands of seeds that may have integrated a transgene. Sometimes we get only five plants back because they didn’t transform well. This isn’t enough because we want a lot of tissue off of them to measure DNA methylation. The experiments require biological replicates so more tissue is needed, and the experiment needs to be done again.

"While it’s a monumental amount of work to grow and regrow enough plants for such an experiment, it’s all worth it to be able to investigate the first generation of transgene silencing.”

The study recently was published in “Nature Plants.” Visit nature.com and search for "initiate DNA methylation" for more information.

MINERAL POINT, Wis. – At 90 years of age David Reichling could be sitting at home taking it easy. Instead he’s checking harvest progress and m…

Corn's resistance to insects may potentially be enhanced by transplanting beneficial microbes found in teosinte, corn’s ancestor. By focusing …

Keith Slotkin and his research team gain new understanding about how silencing of new and foreign genetic material is triggered in plants. Slotkin is a member of the Donald Danforth Plant Science Center, and an associate professor of biological sciences at the University of Missouri-Columbia.