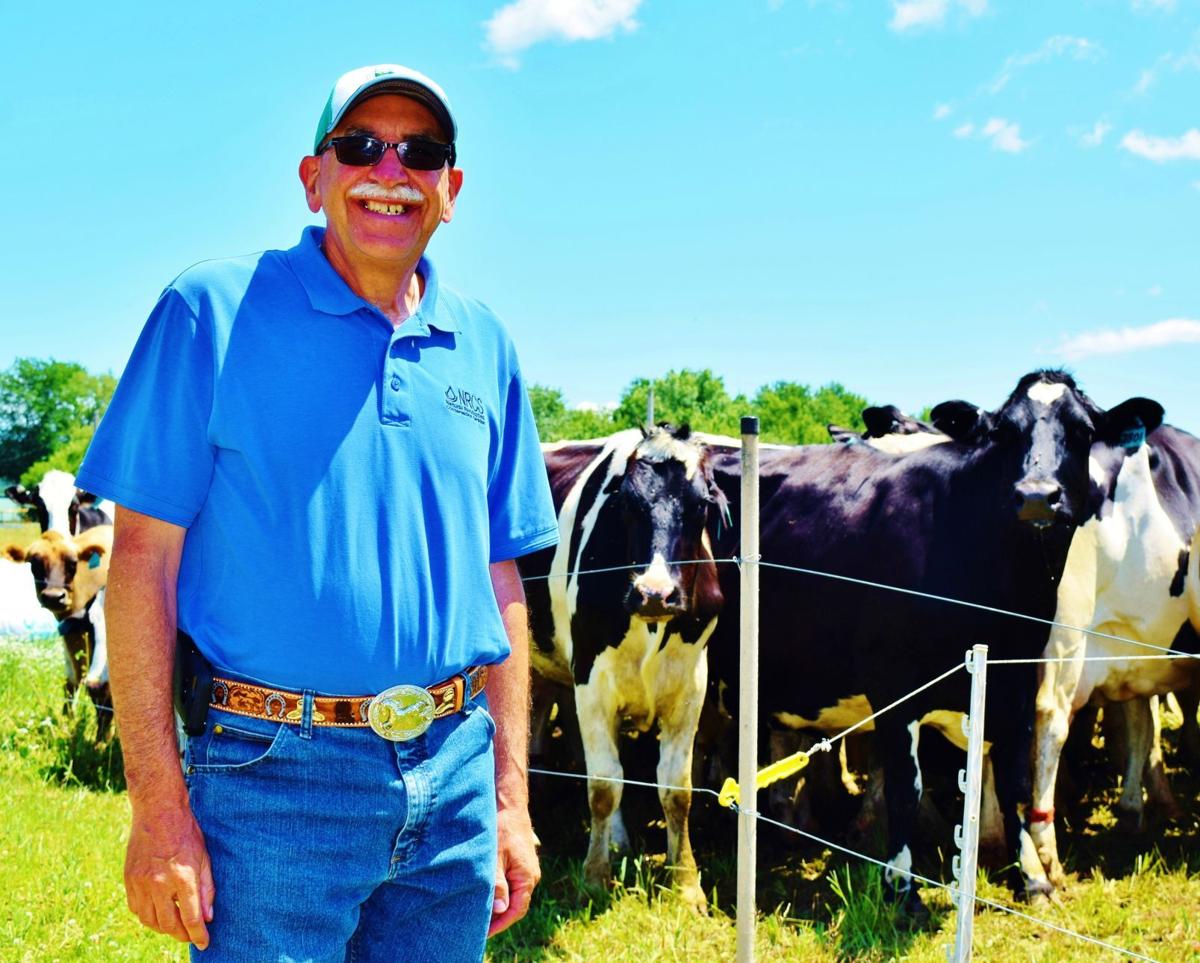 Brian Pillsbury enjoys a pasture walk at Schoepp Farms near Lodi. It's one of the last such events in which he'll participate in his official post as grazing-lands specialist for the U.S. Department of Agriculture's Natural Resources Conservation Service in Wisconsin. He retires July 31. 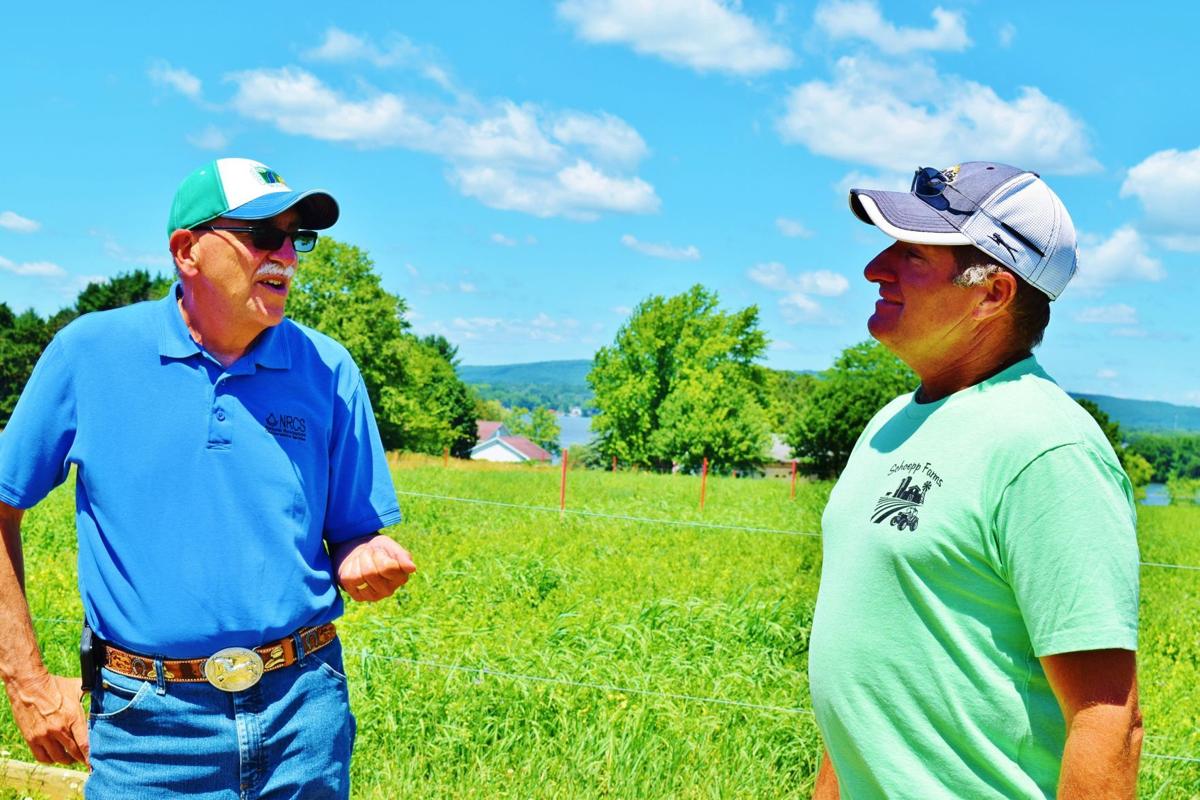 Brian Pillsbury, left, and Ron Schoepp discuss the mob-grazing program at Schoepp Farms. Schoepp moves cattle to new paddocks three to five times per day. The heavily grazed paddocks are then allowed to rest for 60 days, giving them time to regenerate a mix of meadow fescue, bluegrass, alfalfa and more. 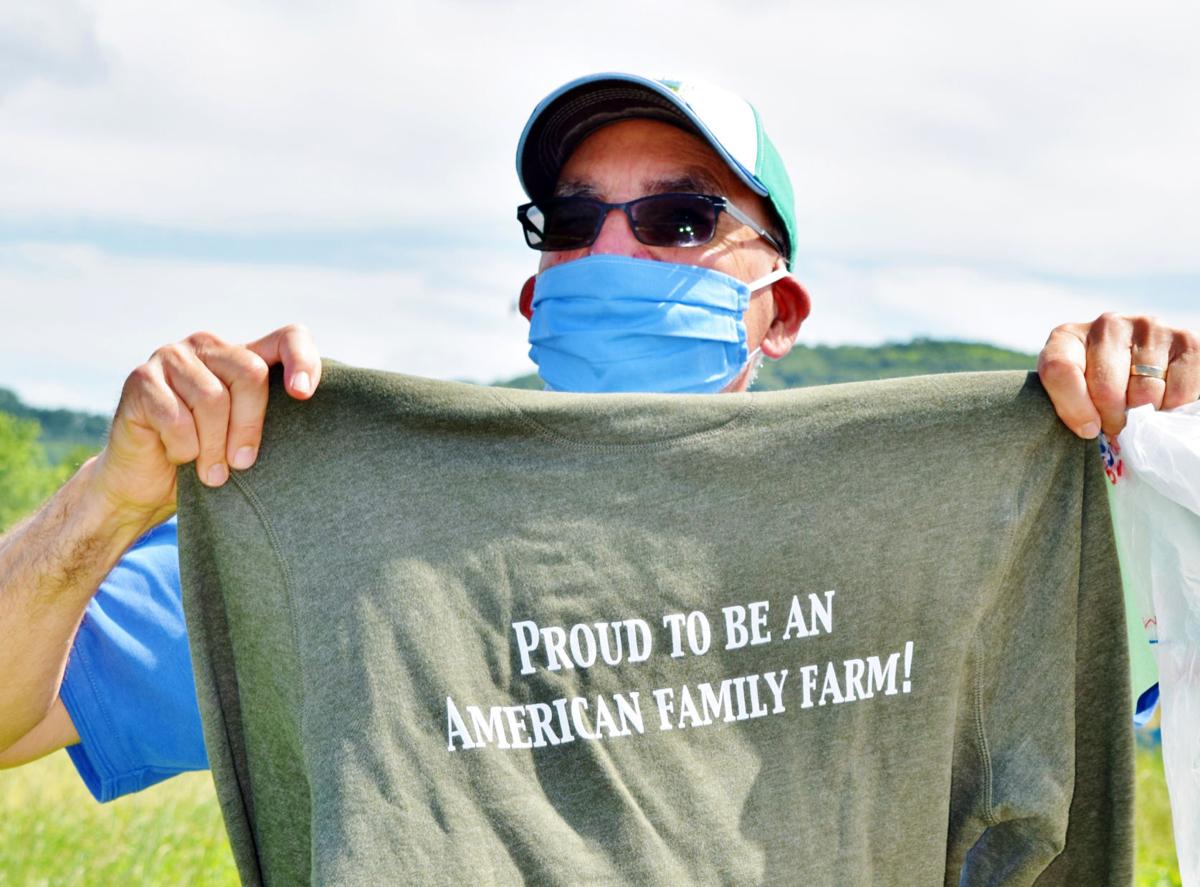 Brian Pillsbury shows off a shirt he receives as a gift from the Schoepp family. Pillsbury has been a great friend to Wisconsin graziers, Ron Schoepp says. 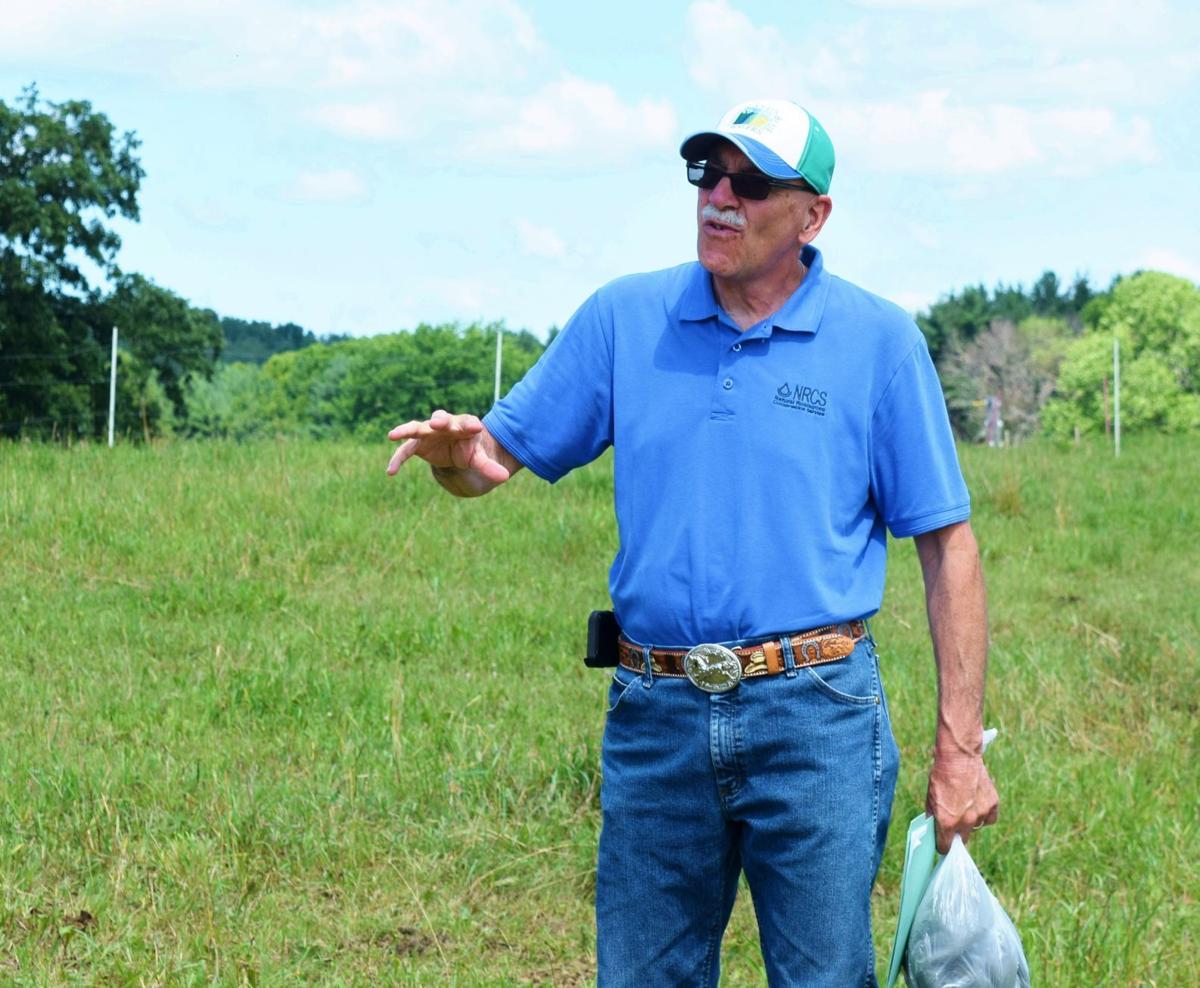 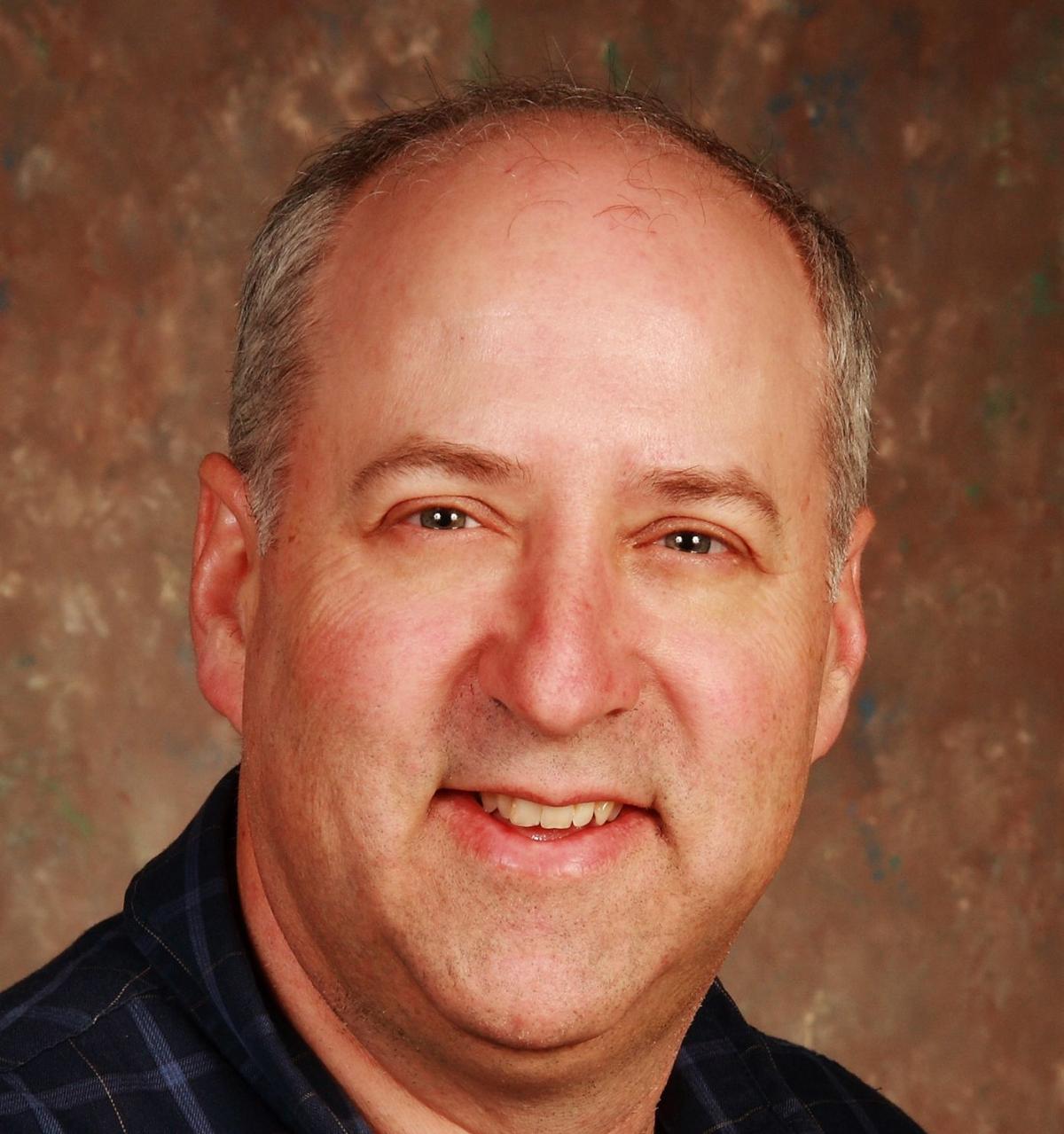 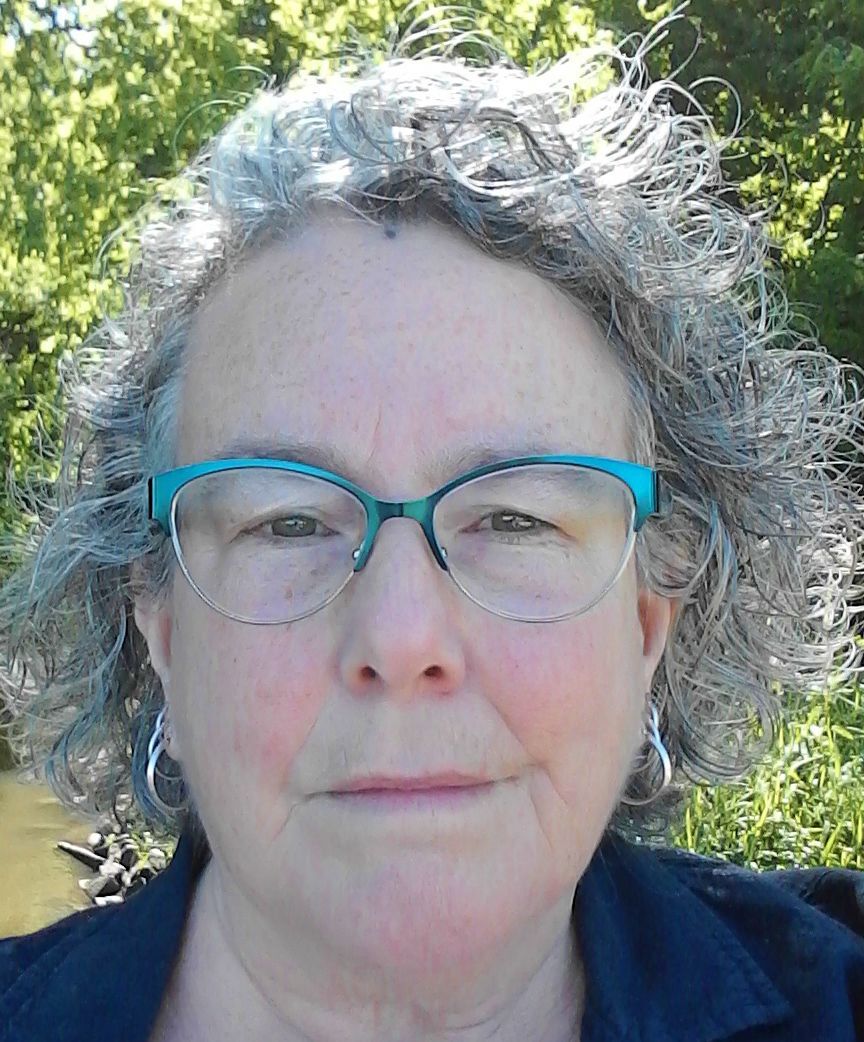 Brian Pillsbury enjoys a pasture walk at Schoepp Farms near Lodi. It's one of the last such events in which he'll participate in his official post as grazing-lands specialist for the U.S. Department of Agriculture's Natural Resources Conservation Service in Wisconsin. He retires July 31.

Brian Pillsbury, left, and Ron Schoepp discuss the mob-grazing program at Schoepp Farms. Schoepp moves cattle to new paddocks three to five times per day. The heavily grazed paddocks are then allowed to rest for 60 days, giving them time to regenerate a mix of meadow fescue, bluegrass, alfalfa and more.

Brian Pillsbury shows off a shirt he receives as a gift from the Schoepp family. Pillsbury has been a great friend to Wisconsin graziers, Ron Schoepp says.

LODI, Wis. – Brian Pillsbury was in his element during a recent pasture walk at Schoepp Farms near Lodi. He maintained the recommended 6-foot COVID-19 distance from others attending the event but could still talk with them to share his passion for grazing.

The pasture walk was one of the last such events he’d attend in his official capacity as grazing-lands specialist for the U.S. Department of Agriculture’s Natural Resources Conservation Service in Wisconsin. He’s retiring July 31.

Pillsbury has held the post since 1997 – but he’s been a grazing enthusiast since childhood. He was raised on a 40-cow dairy farm near Shelburne, Vermont. He entered the University of Vermont with plans to become an engineer but said he found that field of study boring. He changed his major and in 1979 earned a bachelor’s degree in plant and soil science.

After graduating he worked for the USDA in western Iowa. There he helped to build terraces to reduce erosion on the area’s sloping cropland. He then managed a USDA office in northern Iowa before pursuing a master’s degree in entomology at the University of Idaho.

After earning that degree in 1986 he returned to Vermont. His mother had recently had a heart attack and his father had passed away years earlier so he wanted to return to his home state to be closer to her. The Natural Resource Conservation Service also was just starting a grazing program in Vermont.

“I started the grazing program there; grazing was my love,” he said.

Then in 1997 an opening became available in Wisconsin for the state’s first Natural Resources Conservation Service grazing-lands specialist.

“I knew there was a good network of rotational graziers in Wisconsin,” he said. “During that time the USDA was hiring a number of grazing specialists across the country because there was a lot of concern about highly erodible land.”

Mary C. Anderson, a grazing and conservation specialist for the Wisconsin Department of Natural Resources, has worked with Pillsbury for 21 years in multiple capacities. She recalled a 1996 meeting of the Coulee Grazers where Jim Enlow, now-retired Natural Resources Conservation Service assistant state conservationist, asked the group what they wanted in a new state grazing specialist.

“They said someone with real grazing experience,” she said. “Brian was from Vermont … the same home state as Bill Murphy, the author of ‘Greener Pastures on Your Side of the Fence.’ It’s the best grazing book ever published.

“Brian is a dear friend, a skilled grazing planner, a tactful federal employee who went to great lengths to support and promote the benefits of grazing. He did that for conservation of clean water and healthy soils but also profitable beef, dairy and other livestock farms.”

Paul Daigle, director of the land and water program for Wisconsin’s Marathon County Conservation, Planning and Zoning Department, said, “Brian brought his knowledge of managed grazing to Wisconsin from the Northeast, which was a great asset. But more importantly he brought his passion for managed grazing. He explained how it could be incorporated into most any type and size of livestock farm if the land was available and the farmer desired to do so. People who make a difference are invested in what they do. Brian cares about the land, and people and their livelihoods.”

Pillsbury has also been a mentor.

“Brian mentored me early in my career in rotational grazing.” said Serge Koenig, a conservation technician for Wisconsin’s Sauk County Land Resources and Environment Department. “He has a deep knowledge of all things grazing, but what stands out about him is his love and passion for the people he works with. He genuinely cares about them.”

Kevin Mahalko is a grazier from Gilman, Wisconsin, and serves as president of GrassWorks.

“I met Brian in the late 1990s,” he said. “We hosted a pasture walk at our farm and I was happy he made the effort to visit. Since then I’ve seen his passion to help people by sharing his knowledge about grazing.”

Pillsbury held grazing schools for farmers and other agricultural professionals, who in turn shared what they learned with other farmers and farming organizations. In the 2000s there was more federal and state funding available for grazing education. But much of the federal funding came from earmarks, Mahalko said.

“When earmarks went away, funding was reduced for grazing education,” he said.

But Pillsbury still found ways to help farmers. He helped them, for example, to apply for Environmental Quality Incentives Program assistance.

At the peak of state and federal support for grazing, he helped to guide the state Grazing Lands Conservation Initiative coalition. He managed and distributed $900,000 in additional federal funding and $400,000 in state funds for grazing research, education and on-farm technical assistance, Anderson said.

“Those dollars were distributed via a competitive grant program and benefited the entire state of Wisconsin,” she said. “Brian was here through the good funding times … and now the not-so-good.”

Laura Paine is an outreach coordinator for Grassland 2.0. It’s a group of producers, researchers and public- and private-sector leaders working to help producers achieve increased profitability. The groups also works to improve water and soil quality, biodiversity and climate resiliency through grassland-based agriculture. The project is housed at the University of Wisconsin-Madison.

Paine has known Pillsbury since he started his job in Wisconsin.

“I’ve worked closely with him on grazing issues,” she said. “We’ve organized and taught grazing-education programs. We co-coordinated the Grazing Lands Conservation Initiative steering committee. We’ve both served as advisers to the GrassWorks board. And we’ve worked together on policy issues related to grazing.

“He’s brought unwavering support for farmers. Even as he took on more administrative duties he made it a point to continue working with individual farmers and continue advocating for grazing support. He’s been a great colleague and friend. I’ll miss him and the state will miss his knowledge and leadership.

“Many others and I hope the Natural Resources Conservation Service will fill his position. Although he’s irreplaceable, maintaining the position will be critical for the growth of well-managed grazing lands in Wisconsin.”

Pillsbury said, “My job has been gratifying and I’ve been blessed. It’s been fun to watch producers succeed and be happy with what they’re doing.”

His plans for retirement include travel to Alaska and consulting work in the grazing arena.

“I’d like to keep my hand in it,” he said. “Graziers do so much for the environment. We really need to show them appreciation for feeding us and taking care of our land.”