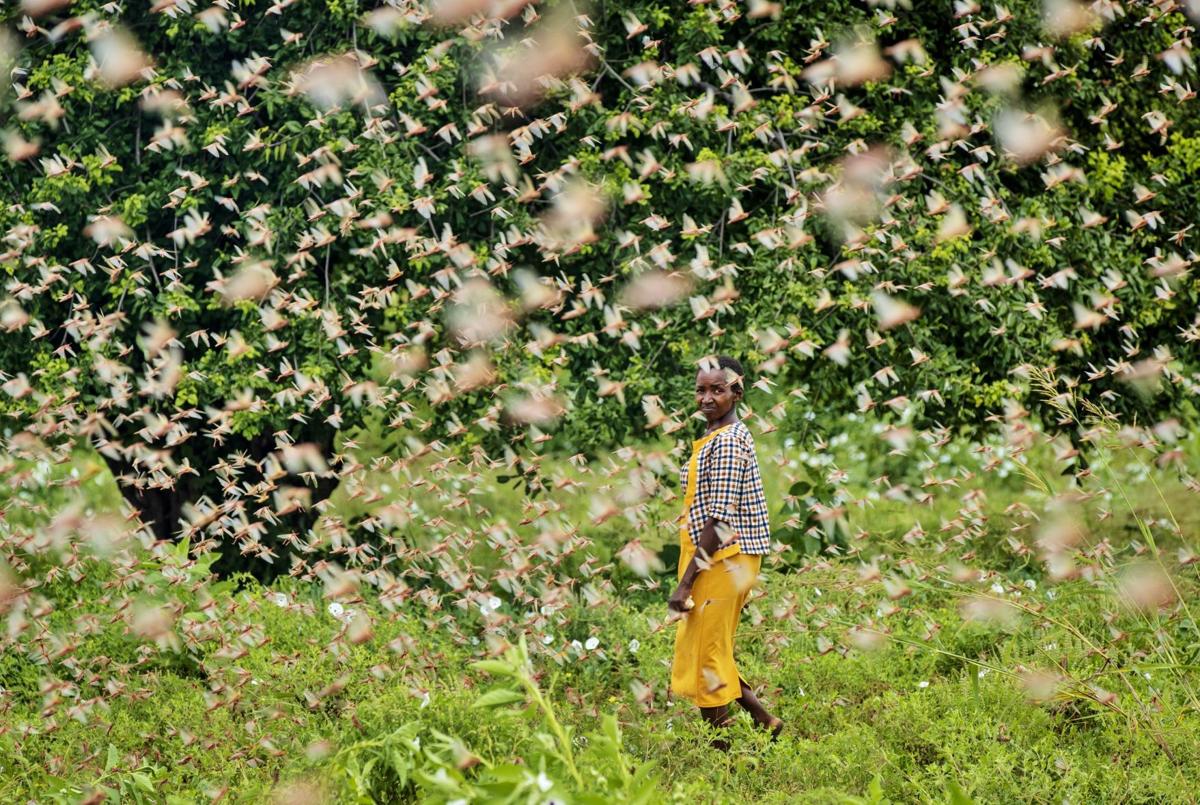 A farmer looks back as she walks through swarms of desert locusts feeding on her crops Jan. 24 in Katitika village, Kitui County, Kenya. Desert locusts have swarmed into Kenya by the hundreds of millions from Somalia and Ethiopia, countries that haven't seen such numbers in a quarter-century, destroying farmland and threatening an already vulnerable region. 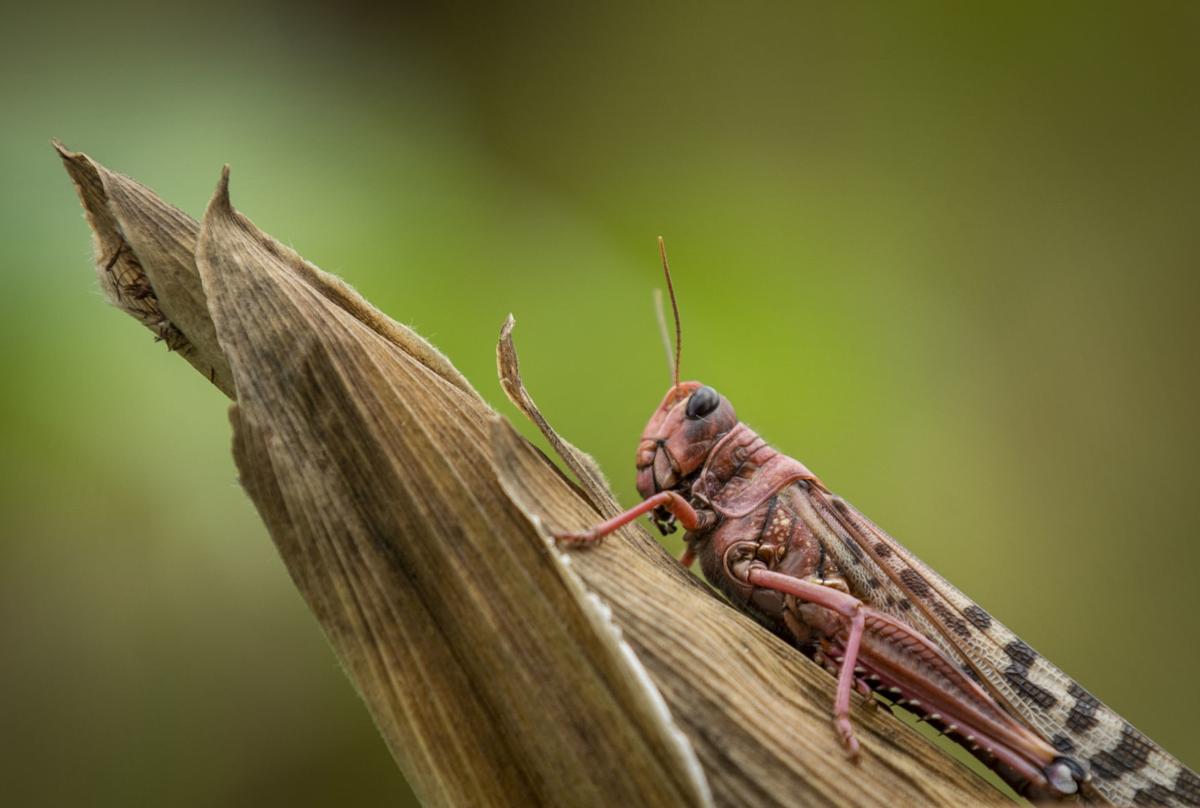 A desert locust sits on a maize plant Jan. 24 at a farm in Katitika village in Kitui County, Kenya. 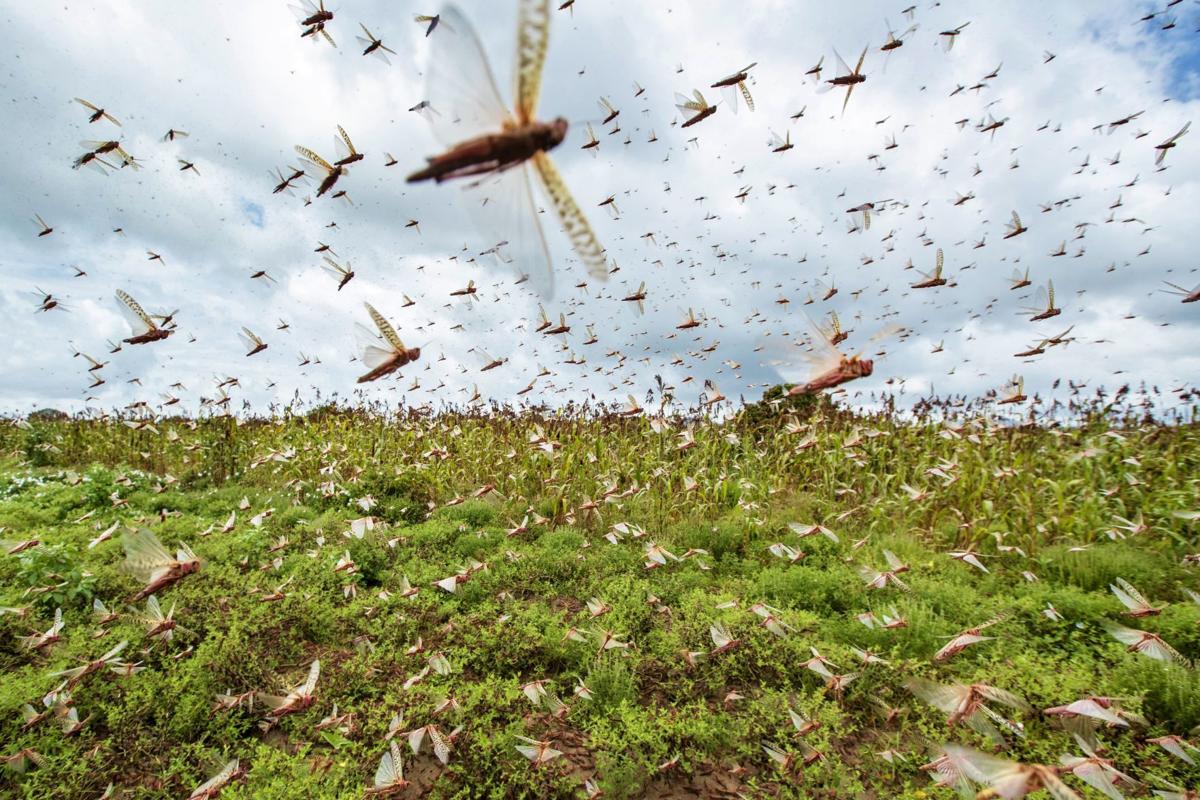 Swarms of desert locusts fly up into the air Jan. 24 from crops in Katitika village in Kitui County, Kenya.

A farmer looks back as she walks through swarms of desert locusts feeding on her crops Jan. 24 in Katitika village, Kitui County, Kenya. Desert locusts have swarmed into Kenya by the hundreds of millions from Somalia and Ethiopia, countries that haven't seen such numbers in a quarter-century, destroying farmland and threatening an already vulnerable region.

A desert locust sits on a maize plant Jan. 24 at a farm in Katitika village in Kitui County, Kenya.

Swarms of desert locusts fly up into the air Jan. 24 from crops in Katitika village in Kitui County, Kenya.

KATITIKA, Kenya (AP) – The hum of millions of locusts on the move is broken by the screams of farmers and the clanging of pots and pans. But their noise-making does little to stop the voracious insects from feasting on crops in the rural community.

The worst outbreak of desert locusts in Kenya in 70 years has seen hundreds of millions of the bugs swarm into the East African nation from Somalia and Ethiopia. Those two countries have not had an infestation like this in a quarter-century, destroying farmland and threatening an already vulnerable region with devastating hunger.

“Even cows are wondering what is happening,” said Ndunda Makanga, who spent hours trying to chase the locusts from his farm. “Corn, sorghum, cowpeas – they have eaten everything.”

When rains arrive in March and bring new vegetation across much of the region, the numbers of the fast-breeding locusts could grow 500 times before drier weather in June curbs their spread, according to the United Nations. The outbreak threatens to worsen an already poor hunger situation for millions of people in Kenya, Ethiopia, Somalia and elsewhere, said Dominique Bourgeon, emergencies director with the U.N. Food and Agriculture Organization.

“You can imagine that a country that has not seen such a thing in 70 years is not well-prepared,” he said of Kenya, East Africa’s economic hub.

The rose-colored locusts turn whole trees pink, clinging to branches like quivering ornaments before taking off in hungry rustling clouds. Astonished by the finger-length insects, children dash here and there waving blankets or plucking at branches to shake the locusts free. One woman, Kanini Ndunda, batted at them with a shovel.

“The situation is very bad but farmers are fighting it in the traditional way,” said Buni Orissa, a resident of Ethiopia’s Sidama region. “The locusts love cabbage and beans. This may threaten the shaky food security in the region.”

Even a small swarm of the insects can consume enough food for 35,000 people in a single day, said Jens Laerke of the U.N. humanitarian office in Geneva. Farmers are afraid to let their cattle out for grazing. Their crops of millet, sorghum and maize are vulnerable, but there is little they can do.

About 172,973 acres of land in Kenya are already infested.

“This one, ai! This is huge,” said Kipkoech Tale, a migratory-pest-control specialist with the agriculture ministry. “I’m talking about over 20 swarms that we have sprayed. We still have more. And more are coming.”

The outbreak, blamed in part on changing regional weather, now threatens to spread to South Sudan and Uganda. New rains in the weeks to come will fuel fresh vegetation and a new wave of locust breeding. The outbreak might not be under control until June when drier weather arrives, authorities have said.

But by then the number of locusts, if left unchecked, could grow 500 times, experts have warned. A single swarm can contain as many as 150 million locusts per square kilometer of farmland – an area the size of almost 250 football fields, regional authorities say. One especially large swarm in northeastern Kenya measured 37 miles long by 25 miles wide.

“The locals are really scared because they can consume everything,” Kitoo said. “I’ve never seen such a big number.”

The locusts eat the fodder for animals, a crucial source of livelihood for families who now worry how they will pay for expenses like school fees, he said.

He has his own concern about the locusts.

“They will lay eggs and start another generation,” he said.

The changing regional weather has contributed to exceptional breeding conditions, said Nairobi-based climate scientist Abubakr Salih Babiker. Migrating with the wind, the locusts can cover as many as 93 miles in a single day. They look like tiny aircraft lazily crisscrossing the sky.

An Ethiopian representative said some farmers in Africa’s second-most populous nation have lost 90 percent of their production. The locusts have been moving steadily toward Ethiopia’s Rift Valley, the country’s breadbasket, according to the U.N.

Authorities have said aerial pesticide spraying is the only effective control in the outbreak. But officials in Kenya and elsewhere have said more planes and more pesticide are needed.

“We depend a lot on this season,” said Esther Kithuka, a farmer in Kitui County. “We worry that the locusts will destroy our harvest and we end up remaining hungry through the rest of the year, waiting for October for the next cropping season.”

Even before the outbreak almost 20 million people faced inflated levels of food insecurity across the East African region, which has been long challenged by periodic droughts and floods.

As exasperated farmers look for more help in fighting one of history’s most persistent pests, the Food and Agriculture Organization’s Locust Watch offers little consolation.

“Although giant nets, flamethrowers, lasers and huge vacuums have been proposed in the past, these are not in use for locust control,” the U.N. agency states. “People and birds often eat locusts but usually not enough to significantly reduce population levels over large areas.”

Still it offered recipes. A suggested seasoning in Uganda is chopped onion and curry powder. Then fry.