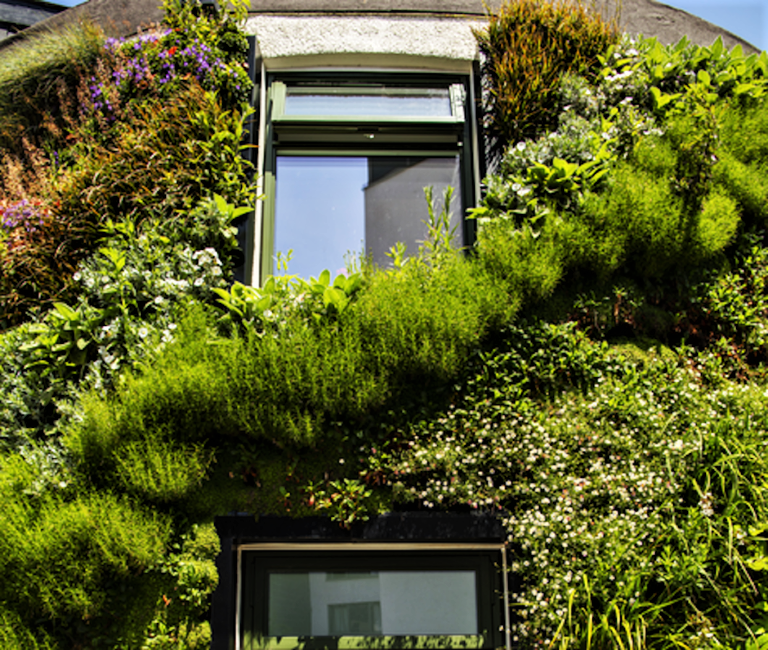 Retrofitting an existing masonry cavity-walled building with a living wall can reduce the amount of heat lost through its structure by more than 30 percent, according to researchers at the United Kingdom’s University of Plymouth. The research was focused on the Sustainability Hub – a pre-1970s building on the university's campus. Researchers compared how two sections of the building’s walls retained heat.

Despite being on the same west-facing elevation, one of the sections had been retrofitted with an exterior living-wall façade. It was comprised of a felt-fabric-sheet system with pockets for soil and planting.

After five weeks of measurements, researchers found the amount of heat lost through the wall retrofitted with the living façade was 31.4 percent lower than that of the original structure. They also discovered daytime temperatures within the newly-covered section remained more stable than the area with exposed masonry, meaning less energy was required to heat it.

About 57 percent of all buildings in England were built before 1964, said Matthew Fox, a researcher in sustainable architecture and the study’s lead author.

“While regulations have changed more recently to improve thermal performance of new construction, existing buildings require the most energy to heat and are a significant contributor to carbon emissions,” he said.

The researchers aim to optimize the performance and sustainability of external living walls through research on the thermal properties and carbon sequestration offered by different plant and soil types.

The research was published in “Building and Environment.” Visit sciencedirect.com and search for “living wall systems” for more information.

Alan Williams is a media and communications officer at the University of Plymouth.

Daily life with nature outdoors – with plants, animals and soil – can provide a direct connection to the soul. Sometimes even a particular aro…

HELENA, Wis. – Reinventing itself three times didn’t work for Helena, a town on the south shore of the Wisconsin River in Iowa County, Wiscons…

Sometimes folks feel overwhelmed. They feel separate, divided from those around them. But in some country places people are working to bring p…

Scientists at the U.S. Department of Agriculture’s Agricultural Research Service are preparing wheat for future climate challenges. Their aim …

On a chilly September afternoon, a flock of Targhee-Rambouillet-cross sheep quietly wander the grounds of an 18-acre solar-garden site in sout…