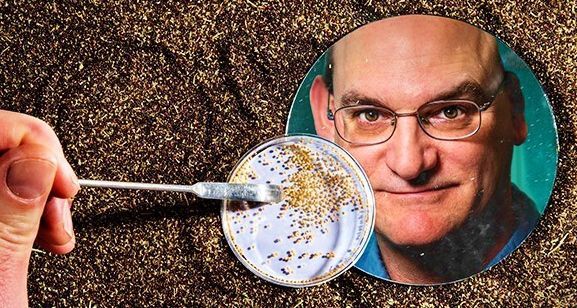 Pat Tranel, pictured along with millions of waterhemp seeds, is narrowing the search on the genetic architecture of herbicide resistance in the herbicide-resistant weed. Tranel is a professor in the department of crop sciences at the University of Illinois.

A University of Illinois study is opening that box in a new way. Researchers are identifying gene regions responsible for non-target-site herbicide resistance in waterhemp.

“We used a genetic-mapping approach with the reference genome for waterhemp, a species that can cause yield losses of as much as 70 percent in corn and is resistant to seven herbicide modes of action,” said Pat Tranel, a professor and associate head in the department of crop sciences at the University of Illinois and co-author on the study. “We were able to narrow it to two regions of the genome, or about 60 genes.”

Being able to pinpoint the genes for non-target-site resistance could lead to development of tools for early detection and herbicide management.

“We eventually want to develop an assay farmers can use to tell if the waterhemp in their field is resistant to a given chemical, either to confirm why a previous application didn’t work or before they spray to see if they're going to waste money,” said Brent Murphy, a doctoral researcher at the University of Illinois and lead author on the study. “The genomic assays exist for target-site resistance because we know the region of the genome where those mutations are, but for non-target-site resistance, we have had no idea where to look until now.

“Now we know the genes responsible are somewhere in the two small regions of the genome. So we’ve come to an intermediary step to eventually developing an assay that growers can use to determine whether they should spray a certain chemistry.”

The researchers looked for genes that allow waterhemp to evade hydroxyphenylpyruvate dioxygenase – HPPD – inhibiting herbicides. One of those herbicides is tembotrione, a chemical commonly applied in seed corn and other production systems.

To find the genomic regions responsible, they mated waterhemp plants that showed resistance or sensitivity to hydroxyphenylpyruvate dioxygenase inhibitors. Then they exposed the grandchildren of those parent plants to hydroxyphenylpyruvate dioxygenase-inhibiting herbicides to see how they fared. Because the complete waterhemp genome is now available, they were able to look for commonalities among plants that survived the inhibitor application.

“Using that genetic-mapping approach, we identified two regions of the genome that seemed to be associated with resistance,” Tranel said.

Murphy determined which plants had each of the two regions, and which had both. That allowed him to rank the importance of the gene regions.

Tranel said, “A lot of times we know a trait is controlled by two genes. But does that mean both genes are equally important, or one gene is 90 percent responsible and the other gene is 10 percent responsible? That's part of what we’re looking at in the genetic architecture of a trait – the number of genes, where they are, and the relative importance of the different genes. Here we saw a nice stepwise effect. If you had one of the regions, you were kind of resistant. If you had the other one, you were kind of resistant. If you have them both? You're pretty resistant – essentially like the resistant parent.”

While the researchers still don’t know which of the 60-some genes are essential to hydroxyphenylpyruvate dioxygenase-inhibitor resistance – they’re considering additional work to narrow the search. They know none of the genes encode p450 enzymes. Those have been implicated in multiple studies as key players in non-target-site resistance.

“While a p450 enzyme might still be involved, our study indicates the change causing resistance is in a gene regulating the p450 rather than in the p450 gene itself,” Tranel said.

Hydroxyphenylpyruvate dioxygenase-inhibitors are commonly used in seed corn and other corn-production systems. But they hadn’t been used in the field where the researchers collected the waterhemp for the study.

“There wasn't a previous field-use history of the chemistry,” Murphy said. “So it was interesting to see that our population was resistant to it. How did this develop? Most of the time you expect resistance to develop as a result of some form of selection pressure. But here we didn’t have an obvious one.”

“Finally we’re getting the tools we need to determine metabolic herbicide resistance, which is the greatest threat to contemporary weed management,” he said.

The article recently was published in Pest Management Science. Visit onlinelibrary.wiley.com and search for “HPPD-inhibitor resistance” for more information.

Lauren Quinn is a media-communications specialist for the University of Illinois-College of Agricultural, Consumer and Environmental Sciences. The Department of Crop Sciences is in that college. Visit aces.illinois.edu for more information.

RED CLIFF, Wis. – In ancient times alchemists claimed they could transform straw and dross into gold. They claimed they did it through a combi…

Grandpa always used to say in early fall there is food to beat the band. So it is this year in far-northern Wisconsin. It’s the time of wonder…

Calculating the timing of seasonal plant events could become easier to do, thanks to time-series images. Images are being captured by tower-mo…

URBANA, Ill. – By the end of the century scientists expect climate change to significantly reduce corn yield. Some predict losses of as much a…

PESHTIGO, Wis. – Firestorm – a raging, angry inferno so large and powerful that it creates its own weather. Not just a crown fire, but a fire …

Regenerative farming and planting green were the main topics of discussion at an Aug. 17 field day hosted by Peninsula Pride Farms and the Doo…

Pat Tranel, pictured along with millions of waterhemp seeds, is narrowing the search on the genetic architecture of herbicide resistance in the herbicide-resistant weed. Tranel is a professor in the department of crop sciences at the University of Illinois.