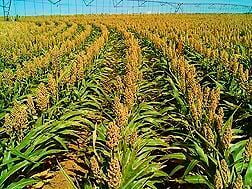 Sorghum is known to be more heat- and drought-tolerant than its close relative corn. But the underlying reason for the difference isn’t well-established. Solving the mystery may be key to developing corn that’s more resilient to elevated temperatures and the often dry summer conditions in parts of the Midwest.

A team of researchers from the University of Nebraska-Lincoln has taken a big step toward identifying the biochemical and genetic basis for the large differences in the ability of corn and sorghum to tolerate environmental extremes.

The differences, which make sorghum a grain and forage crop of choice for semi-arid climates, have been attributed in part to the large amounts of wax that coat sorghum’s leaves and stems. The wax serves as a barrier to water loss, especially at elevated temperatures.

Mature sorghum plants feature an enriched, steroid-like wax. Sorghum also has more wax on its surfaces than corn. The abundance of the particular kind of wax was missed in previous sorghum analyses, according to the researchers.

They also found that corn wax is devoid of that particular wax component. The steroid wax has been shown to “seal” the wax of some desert plants to further reduce water loss. Comparing the genomes of sorghum and corn, the team concluded that the key gene for steroid-wax production is mutated in corn, resulting in an inability to make it.

The research team was led by former postdoctoral fellow Lucas Busta, working in the laboratory of Ed Cahoon, director of the University of Nebraska-Lincoln’s Center for Plant Science Innovation. Busta is now an assistant professor at the University of Minnesota-Duluth.

Busta is working with Tom Clemente, a professor of biotechnology at the University of Nebraska, to add the non-mutated sorghum gene to corn. The researchers said they hope the modified corn will gain the ability to make steroidal waxes for improved production in high-temperature, low-rainfall seasons and in regions of the world currently unsuitable for corn production.

“We’ve found an extremely interesting correlation, and the next step is to test it,” Busta said.

Researchers at the Cahoon laboratory also are exploring the potential to divert a portion of sorghum’s wax content to produce high-value oils as co-products in bioenergy sorghum.

The research was recently published in the journal "Proceedings of the National Academy of Sciences." Visit pnas.org and search for "a co-opted steroid synthesis gene" for more information.

RISING SUN, Wis. – It’s difficult to believe looking at the few buildings left in Rising Sun that it once made international news. Driving alo…

PHOENIX (AP) – Much of the western half of the country has been blasted with sweltering heat this past week. A high-pressure dome combined wit…

The United States grows a lot of corn and soybeans. Some researchers think it’s a good idea to add wheat into that mix. A new study shows that…

Weather out of whack

A May that was barely colder than normal has been followed by an extremely warm and dry first two weeks of June. Through June 11 southern Wisc…

The year 2021 has been dry in far-northern Wisconsin. Drought maps show part of the area has had normal rainfall. But farms in northern Bayfie…

As drought conditions intensify for southern Wisconsin, there are few chances for showers and thunderstorms during the next week, according to…

Editing a plant’s genes can help the plant thrive during drought, extreme heat and other climate change-related crises. But it’s expensive and…