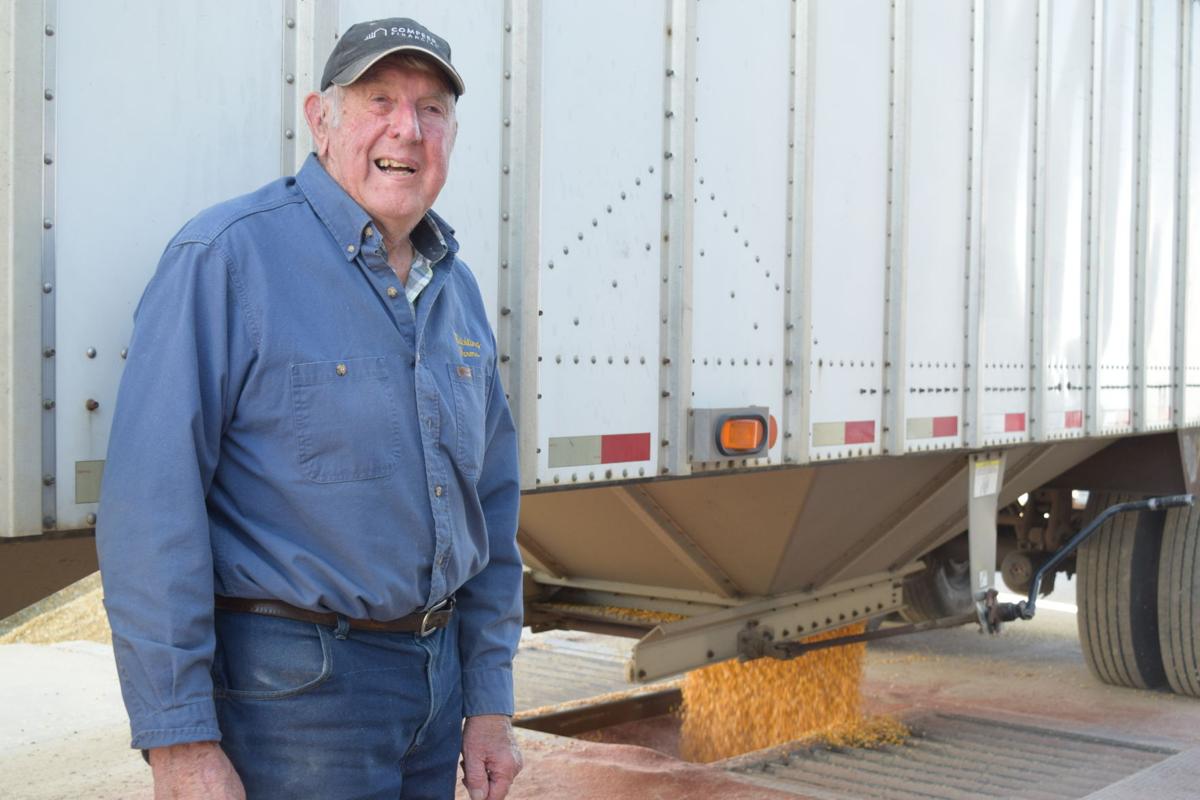 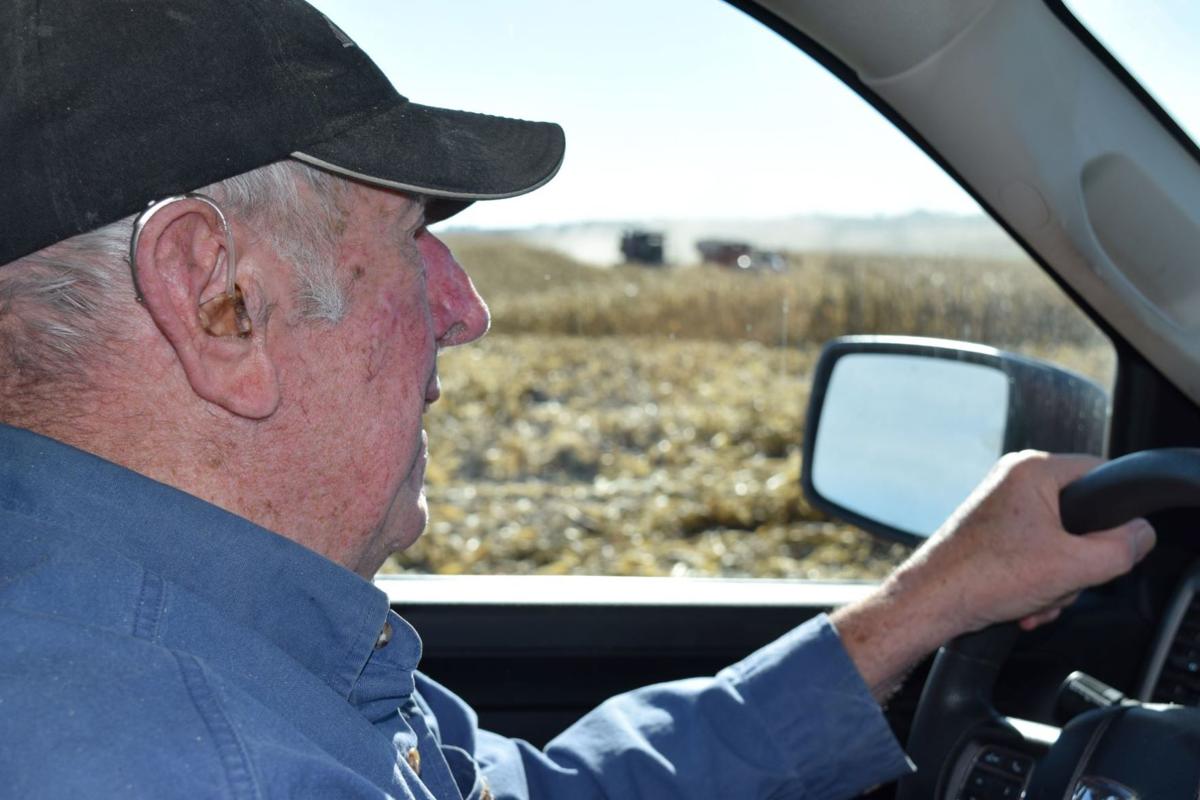 David Reichling takes a drive to check on corn-harvest progress. 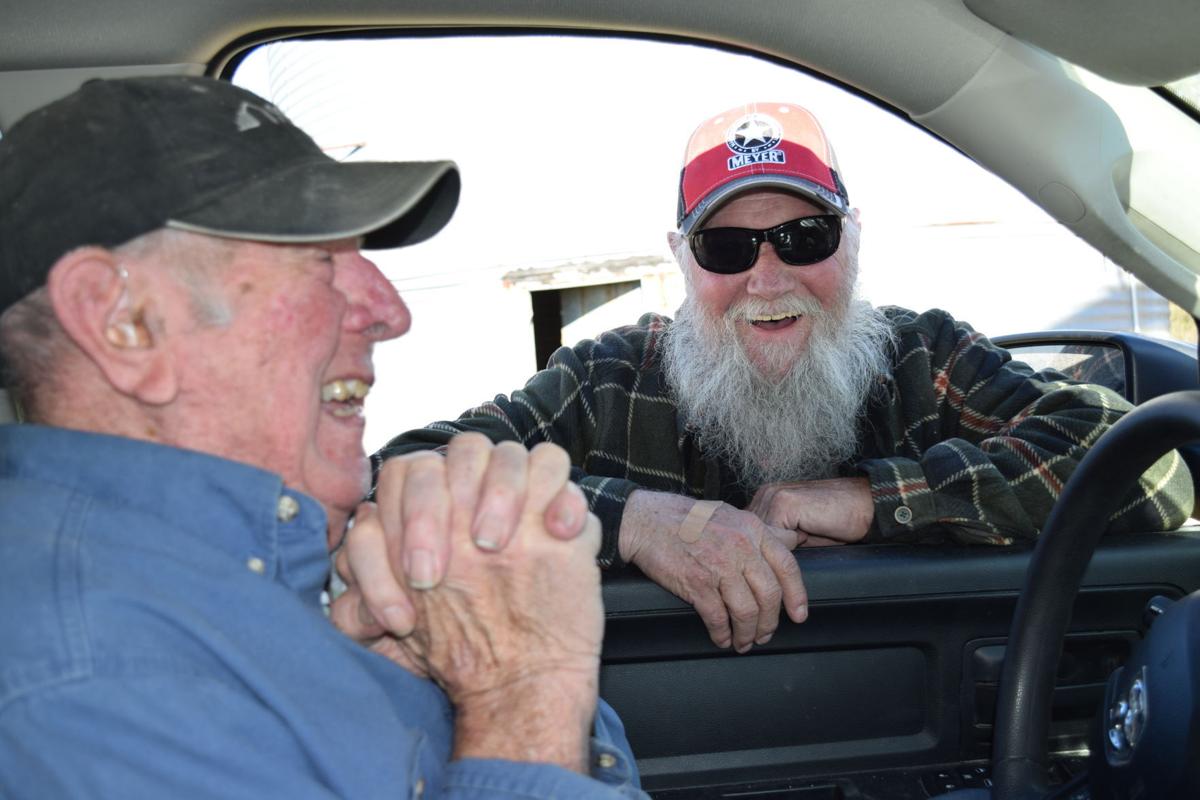 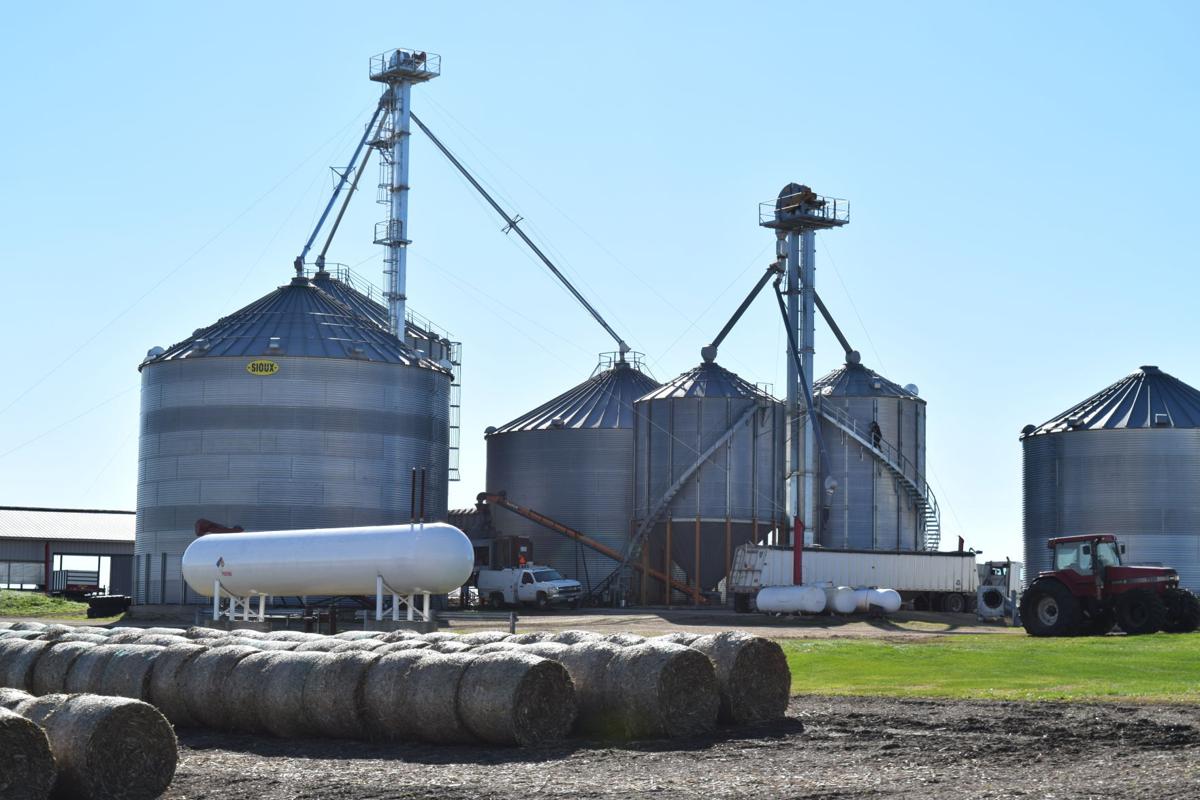 Reichling Farms has a grain-storage capacity of 300,000 bushels of corn.

Corn stover is harvested for forage to feed the Reichling family's beef-cattle herd in winter months. 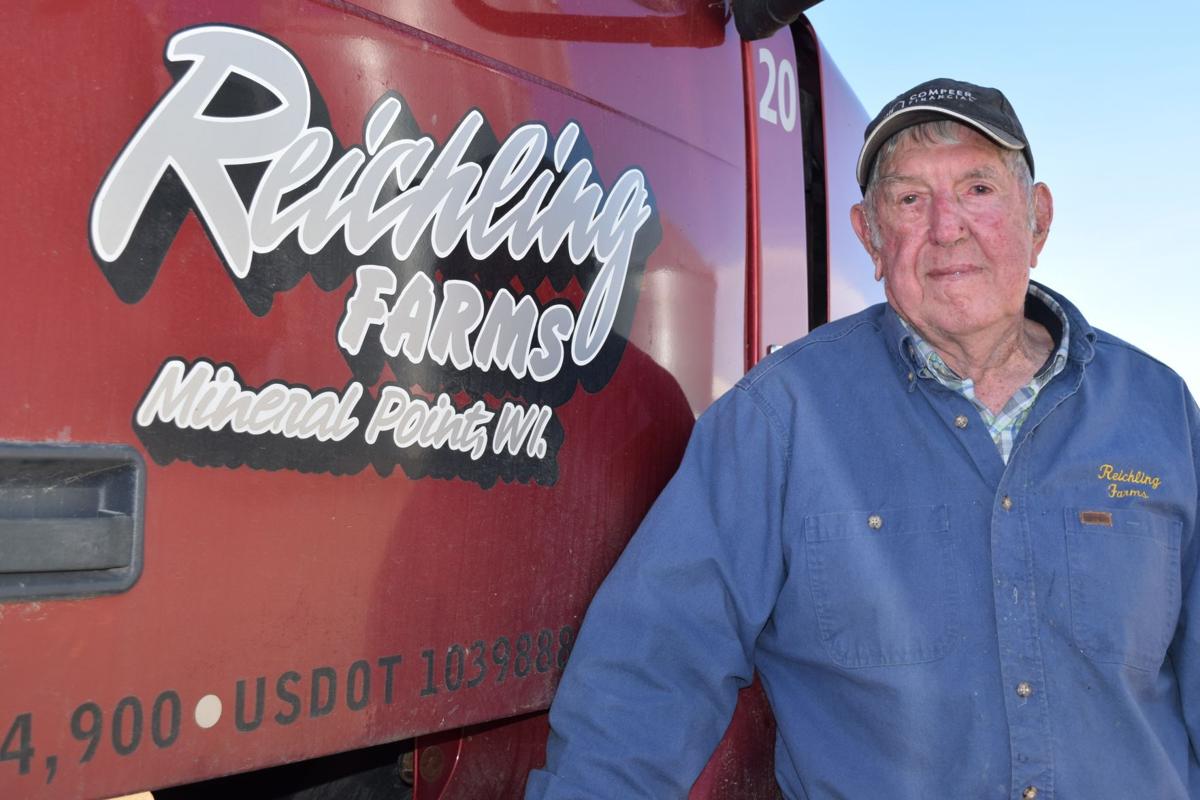 The Reichling Farms truck fleet has a workout at harvesttime.

MINERAL POINT, Wis. – At 90 years of age David Reichling could be sitting at home taking it easy. Instead he’s checking harvest progress and managing the grain-drying operation at Reichling Farms, his family’s farming operation near Mineral Point. That’s not all; the veteran farmer still keeps the farming operation’s books.

“I want to know what’s going on,” he said with a smile.

That’s no mean feat. Reichling Farms is a 5,000-acre cash-crop operation with 300,000 bushels of grain-storage capacity. The family also has 800 head of beef cattle, and in summers they background 400 calves to weights of about 200 to 300 pounds.

Reichling began farming when he was 22 years old. He and his brother, Richard Reichling, who passed away in 2012, farmed together until 1990. Through the decades they increased their dairy herd – from milking 40 cows in the early 1950s to 160 cows in the 1990s.

About 10 years ago David Reichling transitioned ownership and management of the farm to three of his four sons – Joe, Tom and Pat Reichling. His other son, Ed Reichling, owns R Equipment, a farm-machinery business in Mineral Point. David Reichling also has two daughters – Sherrey Christ and Sheila Williams. His eldest daughter, Theresa Thompson, passed away in 2005.

During his lifetime of farming the 90-year-old has seen and experienced many big changes. The cropping operation has expanded from 250 to 5,000 acres.

That current planter as well as a 24-row soybean planter are guided with global-positioning-system technology. They have electric drives; Reichling’s first planter was chain-driven.

Yet some tools remain tried and true.

“Dad always taught me never to go the fields without a pocket knife,” Pat Reichling said. “That’s because it’s easy to use to check for corn depth and population.”

David Reichling recently watched his son Tom Reichling harvest corn, a steady stream of bright-yellow grain flowing from the combine into the grain cart traveling alongside. The elder farmer said advances in seed genetics have been among the biggest changes he’s seen.

“That’s how we’ve been able to produce the amount of bushels we do now,” David Reichling said. “And the biggest yield we ever had was in a year when we had 10 inches less rain than normal.”

While he has welcomed many changes in farming he gradually – albeit grudgingly – accepted another change when his sons decided in the mid-1990s to sell the family’s dairy herd.

Pat Reichling said, “He didn’t talk to us for about four months after that.”

His father said, “I had milked cows all my life and loved it. It was always the calmest time of the day. When the boys decided to sell the cows it made me mad. But it was the best move we ever made.”

He points to recent heifer-calf prices as one of the reasons he’s relieved to no longer be in the dairy business. According to the U.S. Department of Agriculture-Agricultural Marketing Service’s National Dairy Comprehensive Report for September, No. 1 dairy-heifer calves – age birth to 14 days – were bringing $30.84 per hundredweight; No. 2 dairy-heifer calves were bringing $17.70 per hundredweight.

In 1959 heifer calves – both beef and dairy – sold for an average $26 per head, according to the USDA’s National Agricultural Statistics Service. And operating costs were much less expensive then.

Then there were the hogs. When David Reichling was an FFA member in the late 1940s, he sold a load of pigs for 9 cents per pound. He sold his last load of hogs in 1998 for the same price.

“After that Dad nailed the door of the hog house shut and hasn’t opened it since,” Pat Reichling said.

David Reichling’s attention to numbers as well as his desire to continue managing the farm’s books doesn’t surprise Mike Wetter, who retired in March as a financial officer for Compeer Financial. He worked with Reichling on financial planning for about two decades. The two also talked before Reichling transitioned the farm’s ownership to his sons.

“David loves to be hands-on and have a pulse on the farming operation,” Wetter said. “He was cautious but he also understood the need to grow the business. He had a good sense of timing, and when to use credit when purchasing land or adding equipment.”

In the 1970s Reichling served as chairman of the board of what was then the Production Credit Association in Darlington and Dodgeville, Wisconsin. Reichling being a farmer-businessman contributed a great deal to the board. The experience probably also helped Reichling hone his business skills, Wetter said.

Byron Berg served with Reichling on the Production Credit Association board. Berg passed away several years ago, but his son Mike Berg shared a memory of the two men’s first board meeting together.

“I remember my dad saying, ‘I really like this Dave,’” Berg said. “They would become lifelong friends.”

Corn's resistance to insects may potentially be enhanced by transplanting beneficial microbes found in teosinte, corn’s ancestor. By focusing …

Crop improvement often involves the transfer of genetic material from one organism to another to produce a valuable trait. Some examples of cr…

David Reichling takes a drive to check on corn-harvest progress.

Reichling Farms has a grain-storage capacity of 300,000 bushels of corn.

Corn stover is harvested for forage to feed the Reichling family's beef-cattle herd in winter months.

The Reichling Farms truck fleet has a workout at harvesttime. 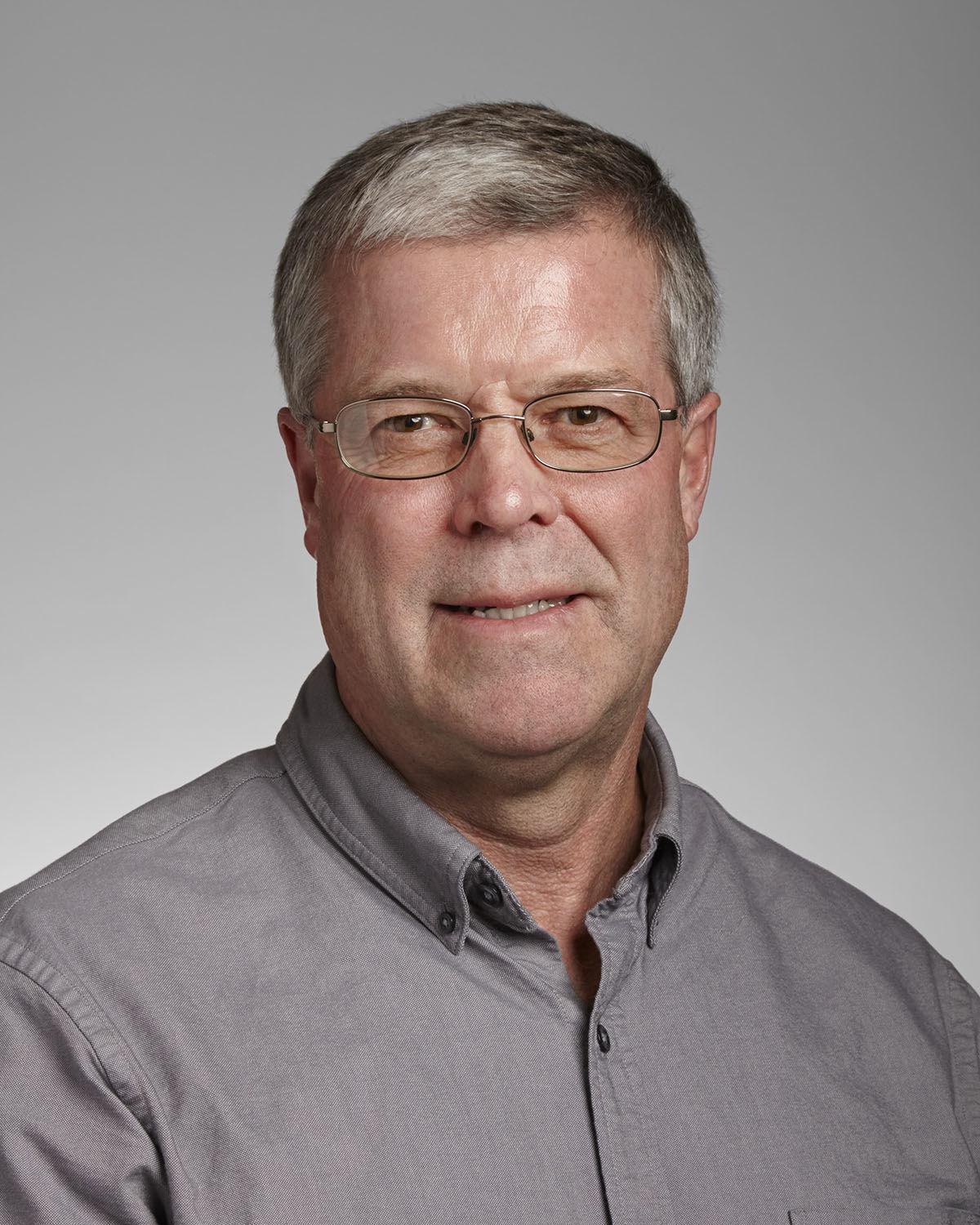