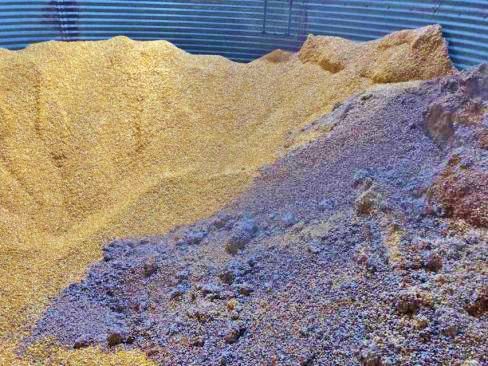 Mold develops in corn on a south-facing wall in winter, likely due to solar heating. 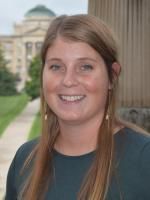 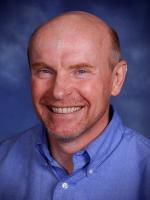 Mold develops in corn on a south-facing wall in winter, likely due to solar heating.

Many producers put grain into their storage bins this past fall at greater moisture contents than normal, due to late crop maturity and less in-field drying in 2019. For grain stored wetter than recommended for storage through the winter months – at more than 15 percent for corn and 13 percent for soybeans – it’s especially vital to monitor grain this winter to be ahead of situations that could cause a loss in condition.

Maintaining grain temperatures at less than 35 to 40 degrees is the best defense against spoilage for grain that’s wetter than ideal. To do so it’s necessary to aerate in order to cool grain in the fall after filling the bin. Also aerate as often as needed throughout the winter to keep grain cool. But even after cooling, grain can warm in storage bins in the winter by solar heating on the bin roof and south-facing walls.

It’s important to remember that the time required to fully aerate a bin – to cool grain and even out grain temperatures – depends on the fan size or airflow. A small aeration fan at 0.1 cubic foot per minute per bushel can take almost a week to fully cool a bin of corn. Err on the side of running the fan too long to prevent uneven grain temperatures. Run aeration cycles when the averages between the daily warmest and coolest temperatures are at 30 to 35 degrees.

Monitor grain condition weekly and aerate as needed. Be sure to inspect and probe the grain for crusting, damp spots and warm spots. Smell the first flush of exhaust air after turning on the fan to notice any off-smelling odors that indicate molding – musty or sour. The first flush of air exits the grain within seconds for a large drying fan and within minutes for an aeration fan. Have a plan of action; move grain at the first sign of it going out of condition. Remember that grain at more than safe storage-moisture content will need to be dried or marketed prior to warm temperatures returning in spring.

Producers should also be aware that reduced-test-weight corn and or poor-quality grain will have a shorter allowable storage time than good-quality grain. Corn with a test weight of less than 53 pounds per bushel may only have about half the effective storage life of corn at 56 pounds per bushel. It’s not advised to store grain longer than half of its allowable storage time to reduce the risk of quality loss before marketing.