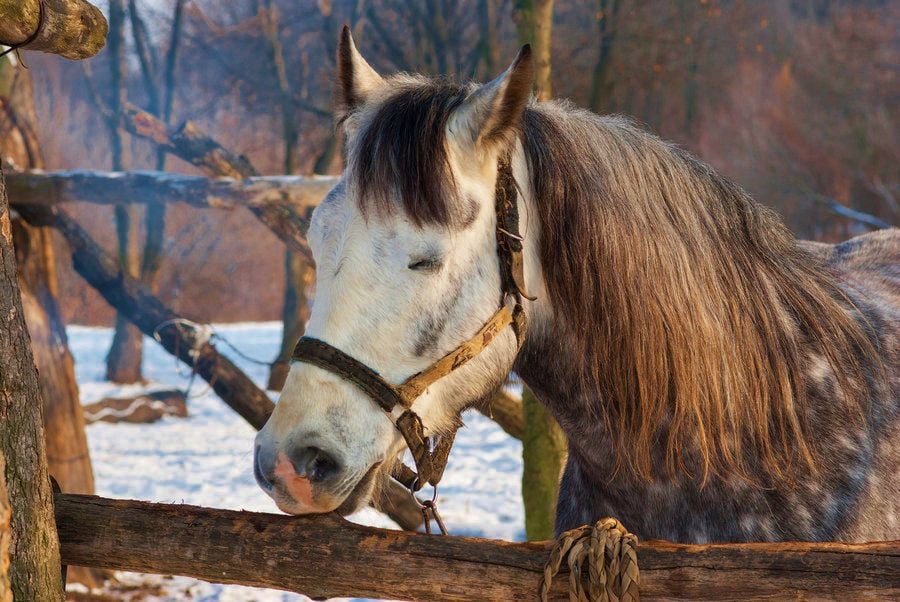 Horse legs can lock in place, enabling a horse to fall asleep without falling over. So horses do sleep standing up. 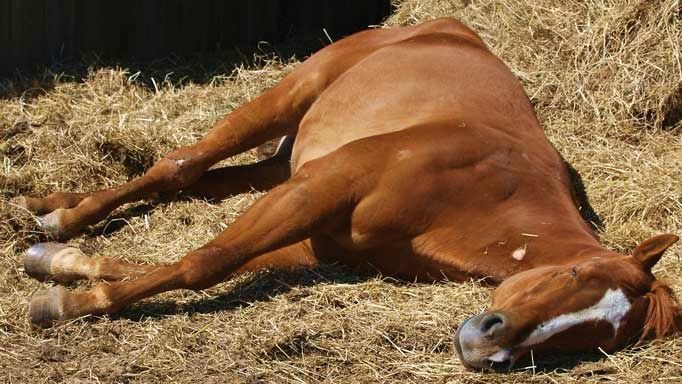 Horses aren’t able to lie down for long periods of time. Their ribcages only allow so much pressure for any amount of time. Average lying-down time for a horse is about 30 minutes.

Horse legs can lock in place, enabling a horse to fall asleep without falling over. So horses do sleep standing up.

Horses aren’t able to lie down for long periods of time. Their ribcages only allow so much pressure for any amount of time. Average lying-down time for a horse is about 30 minutes.

Question: Do horses sleep standing up?

Answer: That question was a source of endless argument for the three Scheckel brothers growing up on the farm near Seneca in Crawford County, Wisconsin. We never did come to any definitive conclusion. We even snuck out of the house one summer night, headed to the barn to see if Dolly, Prince and Lightning were standing in their stalls or lying down. All three were standing, but we couldn't figure out if they were sleeping or not sleeping.

I finally learned an answer straight from our veterinarian's mouth; he’s an expert on horses. Doc says horses have a suspensory-ligament apparatus in the lower leg that locks up. Their legs can lock in place, enabling them to fall asleep without falling over. So horses do sleep standing up – but horses also sleep lying down.

A ligament is a strong flexible connective tissue that joins bone to bone, parallel bundles of collagen fibers. We humans have something akin to the horse; we have a suspensory ligament that holds the lens in the correct place in our eye.

Historically horses were prey for wildcats, lynx and mountain lions; they didn’t feel safe sleeping on the ground. Most of their sleeping was done during the day rather than at night, when predators were out hunting. Horses have straight backs so they can’t get to their feet quickly. If an enemy mountain lion were to come along, a horse might not be able to get up fast enough to make an escape.

In the wild horses only lie down in a herd while a select few will remain upright. It’s their defense designed to protect the herd from predators when they’re at their weak moment, vulnerable to attack.

When a horse is standing still, it’s able to relax such that there is little fatigue. Except for a few minutes each day when it’s in deep sleep, a horse can remain upright. If necessary it can remain upright for several days before it lies down. It can rest in the upright position because of the “stay mechanism” of the forelegs and hind legs. The joints are locked in position by a system of muscles and ligaments.

Horses aren’t able to lie down for long periods of time. Their ribcages only allow so much pressure for any amount of time. Average lying-down time for a horse is about 30 minutes. They do occasionally take short naps lying down during the day; that helps them rest their legs. One can sometimes find a horse stretched out on its side asleep in the sun, or lying on the ground with its legs folded under.

Doc warns that a sleeping horse should not be disturbed; a startled horse might kick.

Larry Scheckel grew up on a family farm in the hill country of southwestern Wisconsin, one of nine children. He attended eight years of a one-room country school, four years of high school and then headed off to the military for a spell. He married, attended college and started a teaching career. That career stretched to more than 38 years teaching physics and aerospace science to more than 4,000 high school students at Tomah, Wisconsin.

Scheckel has been named Tomah Teacher of the Year three times and Presidential Awardee at the state level for six years. He’s the recipient of the Tandy Award, Kohl Award, Wisconsin Physics Teacher Award, Health Physics Society Award, Ron Gibbs Award and Excellence in Science Teaching Award. He’s has authored articles for The Science Teacher magazine and The Physics Teacher magazine. He’s been a Science Olympiad coach and robotics mentor, has organized field trips and star-gazing sessions, and has given orientation flights to students. He’s shared his expertise with teachers at National Science Teacher Association conventions, the Wisconsin Society of Science Teachers and summer workshops. He’s given presentations to thousands of adults and students in such venues as children museums, Boys and Girls Clubs, Rotary and conventions.

He likes to bicycle in the Driftless area of south-central Wisconsin, jog on back roads, fly a Cessna 150 over the verdant countryside, fly radio controlled planes, work crossword puzzles, and read newspapers historical books and trade magazines.

Larry and his wife, Ann, are both retired teachers; they live in Tomah, Wisconsin.

Ligaments attach bones to each other and act as supports. The suspensory ligament in the horse is a strong, broad and fibrous anatomical struc…