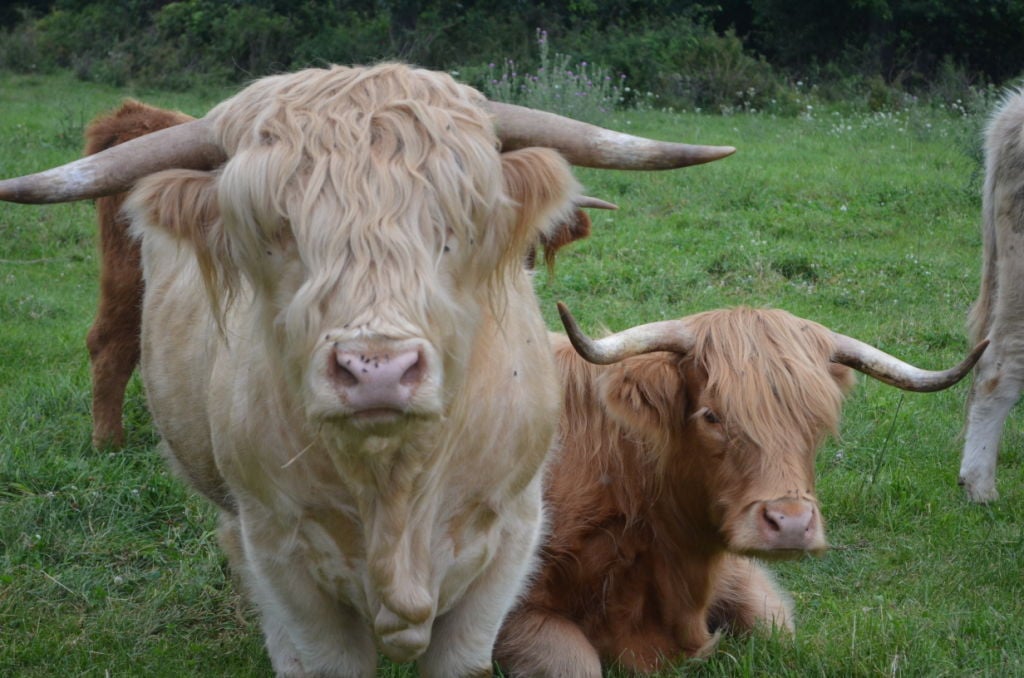 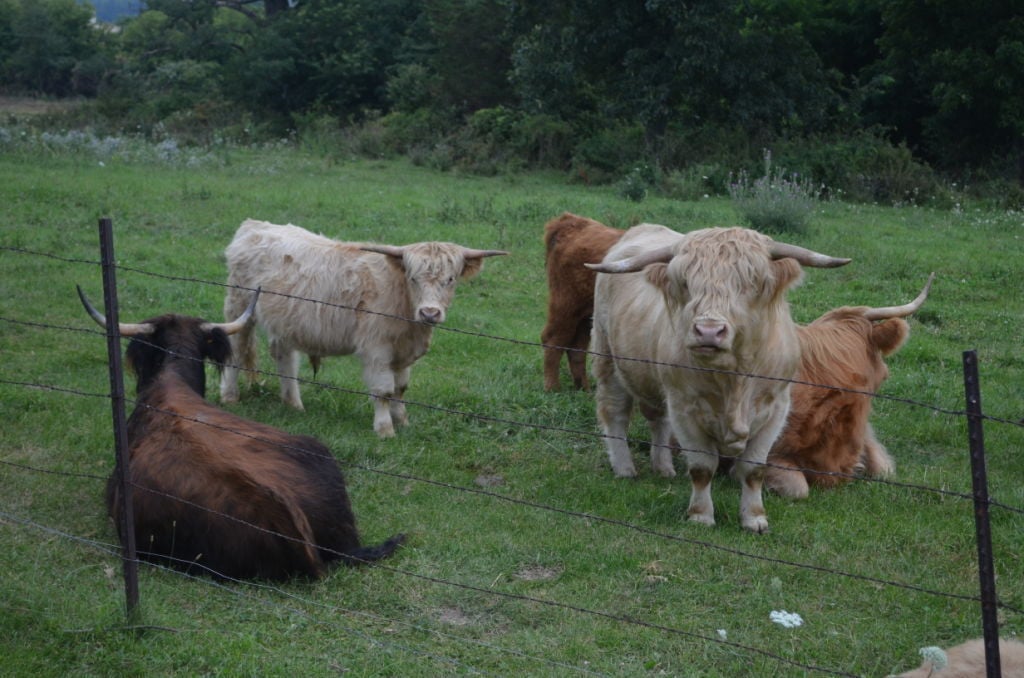 A welcoming committee of 20 Scottish Highland cattle approached as Kevin Oppermann and his wife Keely stood in front of a barbed wire fence that kept the animals confined to their pasture.

The Oppermanns looked upon the herd with enormous pride and satisfaction. Four years ago, their Scottish Highland herd consisted of two cows and two calves.

Now, they have five times as many with names such as Savannah, Myrtle and Lucky, who was born on St. Patrick’s Day 2011.

“This big red cow is 7 years old, and her name is Margie,” Kevin said. “She is the herd boss, which means if she wants to be combed, everybody gets out of the way.”

The Oppermanns’ cattle are living at Stoneman Farms, located outside of Madison and owned by Oppermann’s mother and father.

Some of the herd will move to the Oppermanns’ Highland Spring Farm herd in Oregon, next year.

The Oppermanns toured some Scottish Highland cattle farms in Wisconsin before starting with two cows and two calves purchased from Four T Acres in Burlington, at a cost of $3,000.

They also bought electric fencing and other equipment for $1,500 to get their operation started.

Since then, it has been a learning experience, but they are very happy with their choice.

“They do a good job of taking down the brush,” Kevin said. “They eat thistles, honeysuckle and bushes and use their horns to clear those areas.”

He also likes the fact that Scottish Highlands are docile and cooperative.

“They like to be combed and brushed, and that was something important to us as beginners,” Kevin said. “They are the kind of cattle that are used to being handled, and they do not act like some wild animals we cannot get near.”

Keely said that the steers are never sheltered, and can stay outside even in bitterly cold weather.

“Because of their coats, they do not need to go inside the barn,” she said. “That was important to us, because the pasture does not connect to the barn. They were much happier during the polar vortex than anyone else.”

Also, the Oppermanns’ cost of raising Scottish Highlands is reasonable.

“Because they are all grass fed, we do not have a lot of input costs. They are just out on the pasture and we rotate them every week,” Kevin said. “During the winter, we feed them hay that we grow.”

Yet, the Oppermanns did face some challenges, starting with the arrival of the first four animals in 2010.

“We had not raised cattle on this farm for 20 years, so there were some fencing projects involved,” Kevin said. “The first day they came out of the trailer, we had a small perimeter set up and they ran and just kept running right through the fence. We had to chase them down, but we got them back, and they were fine.”

Kevin added that because Scottish Highlands live on a diet of grass and other vegetation, there is no need to give them antibiotics; however, it may take 24 to 30 months for each steer to reach up to 1,000 pounds and become sellable on the market.

By comparison, Angus cattle may take as little as 18 months.

“Highlands have a significantly smaller carcass than an Angus,” he said. “We get about 400 pounds of meat on a whole animal, and with an Angus, it’s closer to 600 pounds. It takes a lot longer, because Highlands are not bred to grow fast. You do not get a return on investment as quickly.”

Schmidtke said Scottish Highlands do not bring a good price at sale barns, primarily because of their hair and horns. But, they remain popular with beef lovers.

“They do sell well to people who want good beef,” he said. “Sometimes, it takes a little creativity to figure out where to sell them, but once the connection is established there is a steady market for them.”

The Oppermanns are planning to sell six steers this year, up from three in 2013 and after that, may sell up to ten steers annually.

What should consumers expect if they buy Scottish Highland beef? Meat that is lean with a minimal amount of fat.

“Because they have long shady coats, they do not need to put on as much fat to stay warm during the winter,” Kevin said. “The beef is leaner, and the consumer is happy with it. It also has great flavor, and not as much fattiness as you would normally see.”

The Oppermans say that it’s common for curiosity seekers to stop by the Stoneman Farm, not just to buy sweet corn and eggs, but also to catch a glimpse of the Scottish Highland cattle.

“People will be driving down the road and taking pictures,” Kevin said. “They are always interested in them. We explain that they are not buffalo or yaks, so there is a lot of education that we do.”

“Wisconsin has a pretty good climate, because we do get those nice winters that they enjoy,” he said. “Summers aren’t too terribly hot. Being close to Madison, there is no end to the customers looking for grass-fed beef. We are really proud of the beef we sell and very proud of the herd we’ve created so far.”

Before the hustle and bustle of the spring calving season, now is a good time to put together the supplies and equipment that will be needed t…

It wasn’t that long ago that livestock roamed the landscape; rural communities thrived on a local producer-to-consumer food system. We don’t s…