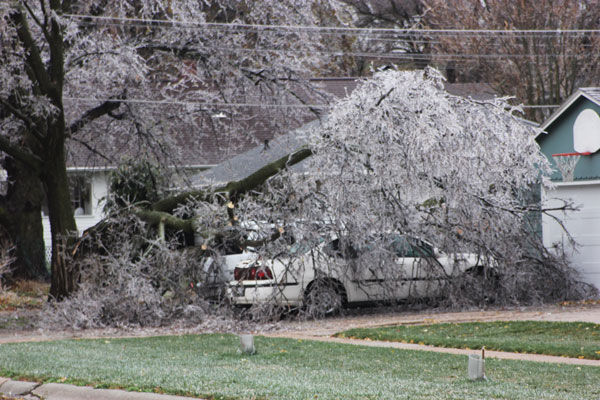 A tree downed by heavy ice covered two cars at the Vince Bruce home. A third vehicle had already been removed. Ice, left behind from an inch and a half of rain, caused a large amount of tree damage throughout the county. 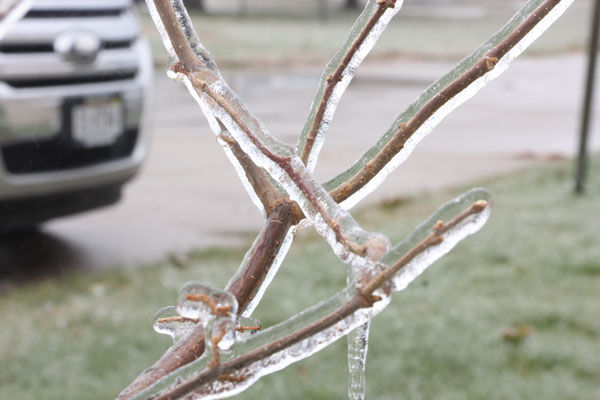 That’s what a quarter-inch of ice looks like. Rain from last week’s storm had ice clinging to nearly every exposed surface.

The first major winter storm of the season wasn’t your garden variety snowstorm.

A system that dumped nearly an inch and a half of rain on Burt County also left behind nearly a quarter inch of accumulated ice.

Although there were few travel impacts, nearly every rural county resident was without electricity service for a few hours, if not days. For many, that meant firing up the generator, turning to auxiliary heat sources, or even spending the night with friends or relatives.

The rains came in spurts, starting Monday afternoon. By late that evening it was raining steadily from a storm that included thunder and lightning, an unusual occurrence for November. When the temperatures went below freezing, the trouble started.

Still, on Tuesday morning, Nov. 10, 2,151 customers were without power in a wide swath that ranged across Burt County Public Power District’s service area, from Dodge to Thurston County.

Falling limbs in Tekamah resulted in a couple of outages. Nebraska Public Power District reported on Tuesday at 5:33 a.m. it had 61 customers without power due to a downed line. That issue was fixed by 9:24

Later Tuesday morning, at 9:56 a.m., NPPD had 111 customers in Craig without power when a tree came down and brought a line with it. Service there was restored at 12:12 p.m.

And again on Tuesday, at 6:55 p.m., 698 Tekamah customers were left in the dark but NPPD was able to clear a branch from the line and power was restored at 6:59 p.m.

Although all residential customers had power restored by Friday, BCPPD General Manager Jon Dockhorn said here is still some conductor damage and wires on the ground. Crews will continue our restoration efforts next week and asks that any downed power lines be reported to the company’s office by calling 402-374-2631 during normal business hours, 7:30 a.m.- 4 p.m.

Tekamah and Oakland both had scores of downed limbs, sending residents scrambling for chain saws. The sound of running saws, countered by the sound of snapping limbs, could be heard all over Tekamah Tuesday morning.

City crews started picking up piled debris from curbsides on Thursday. Street Superintendent Matt Deemer said that work is expected to continue through much of this week.

Vaccinations under way in Burt County

Elkhorn Logan Valley Public Health Department has not produce an updated risk dial since Dec. 22 as staff at the department has been busy with…

In what is becoming a patchwork season, Tekamah-Herman’s wrestling team saw some much-needed action last week.

The family of Mary and Norman Frey of Lyons are requesting a card shower honoring their 70th wedding anniversary.

A celebration of the life of Tim Richard will be held at a later date. The Tekamah man passed away Dec. 29, 2020, at Hospice House in Omaha. H…

The Burt County Board of Supervisors took care of a bunch of housekeeping issues at their first meeting of the new year held Jan. 12. Re-appoi…

Jeanette Major-Nix didn’t live in Decatur her entire life, but she always considered it home. A $1.2 million planned gift to benefit the Futur…

Funeral services for Frances Turner were Saturday, January 16, 2021, at United Methodist Church in Tekamah. Burial was in Tekamah Cemetery. Th…

With construction continuing at the school, Tekamah-Herman’s Board of Education rebuilt its own house last week.

For the first time in more than a year, city departments will have a council member overseeing them.

A tree downed by heavy ice covered two cars at the Vince Bruce home. A third vehicle had already been removed. Ice, left behind from an inch and a half of rain, caused a large amount of tree damage throughout the county.

That’s what a quarter-inch of ice looks like. Rain from last week’s storm had ice clinging to nearly every exposed surface.