Subclinical ketosis is a common fresh-cow challenge that affects even the best-managed herds. Zeroing in on excellent care of transition cows is critical to optimal herd health, reproduction and production levels.

When considering cows with both subclinical and clinical ketosis, the economic burden amounts to about $289 per case.

Research done at the University of Wisconsin-Madison in the laboratory of Heather White led to the development of KetoMonitor. It’s a tool that uses milk-test and cow-management data to assess if a cow has subclinical ketosis. In partnership with AgSource Cooperative Services, KetoMonitor is helping researchers better understand how on-farm practices may be tweaked to curb the effects of the costly disease. 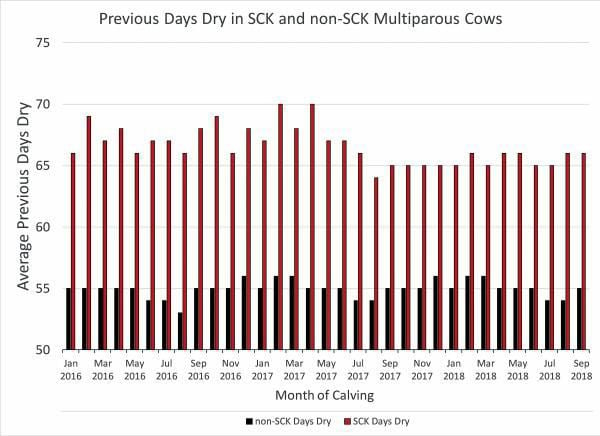 First-lactation cows that develop sublinical ketosis have a worse somatic-cell count at first test compared to non-subclinical-ketosis cows. Research shows an average log score of 3.75 in sub-clinically ketotic compared to 2.8 in non-sub-clinically-ketotic primarous cows. Interestingly the difference in first-test somatic-cell count between the two groups is much smaller in mature cows.

Cows with longer dry periods were more likely to develop subclinical ketosis. Those subclinical-ketosis cows had lesser peak milk and a better somatic-cell count at first test. The research doesn’t demonstrate that subclinical ketosis causes each of those negative outcomes. But knowing the symptoms may help producers determine which cows are affected so they can intervene sooner.

Henry Holdorf is a doctoral fellowship student with Purina Animal Nutrition, working in Heather White’s laboratory in the Department of Dairy Science at the University of Wisconsin-Madison. Email hholdorf@wisc.edu to reach him.